Livestream of the program is available here. 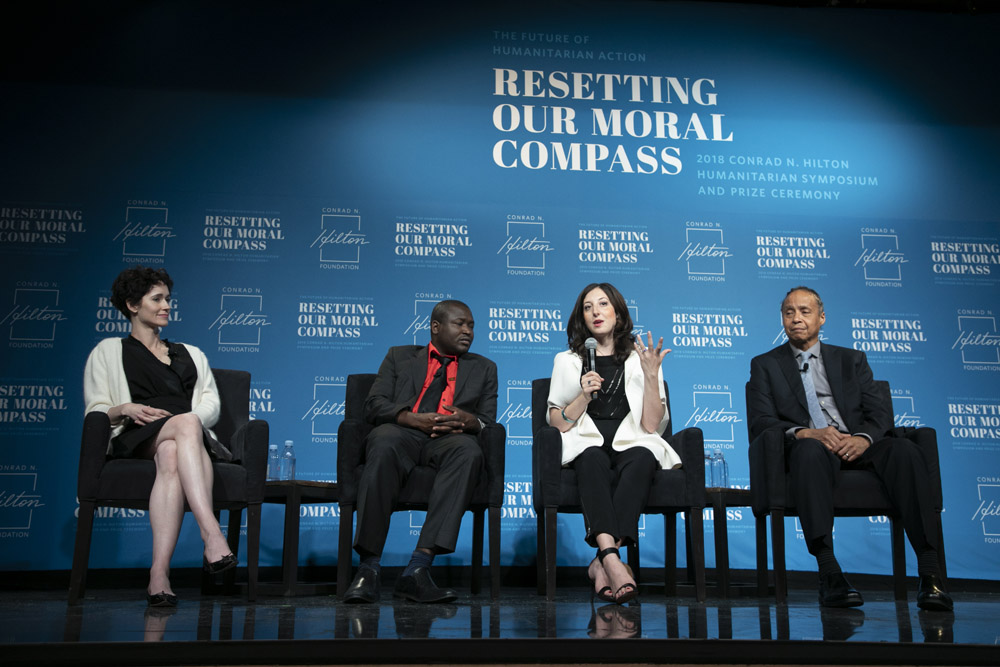 Los Angeles, California — The power of story and promise of hope permeated the program at the Hilton Humanitarian Symposium and Prize Ceremony Oct. 19, and I so sorely needed both of those messages. With world news dominated by seemingly intractable issues, hardened hearts and political stances, it's easy to lose sight of those who, despite the odds, are forging solutions and making a difference. And while none of the speakers or panelists was a sister, I found myself throughout the day thinking of the many women religious whose ministries mirror so many of the topics and themes examined.

The day, which took on the theme "The Future of Humanitarian Action: Resetting Our Moral Compass," featured a wide array of panels and speakers that examined the plight of refugees, addressing poverty, preventing and treating HIV/AIDS, and the work being done to achieve the United Nations' sustainable development goals, among other topics.

Emtithal Mahmoud, an award-winning Sudanese-American slam poet, author and U.N. goodwill ambassador, mesmerized the more than 330 attendees at the Beverly Hilton in Los Angeles, and I'm sure many of the 62,000 watching via livestream. She delivered a gripping performance, recounting scenes from her war-torn childhood; the strength of important women in her life, her grandmother and mother; and her own triumph over tragedy. A standing ovation, the first of many throughout the day, followed her performance and talk. 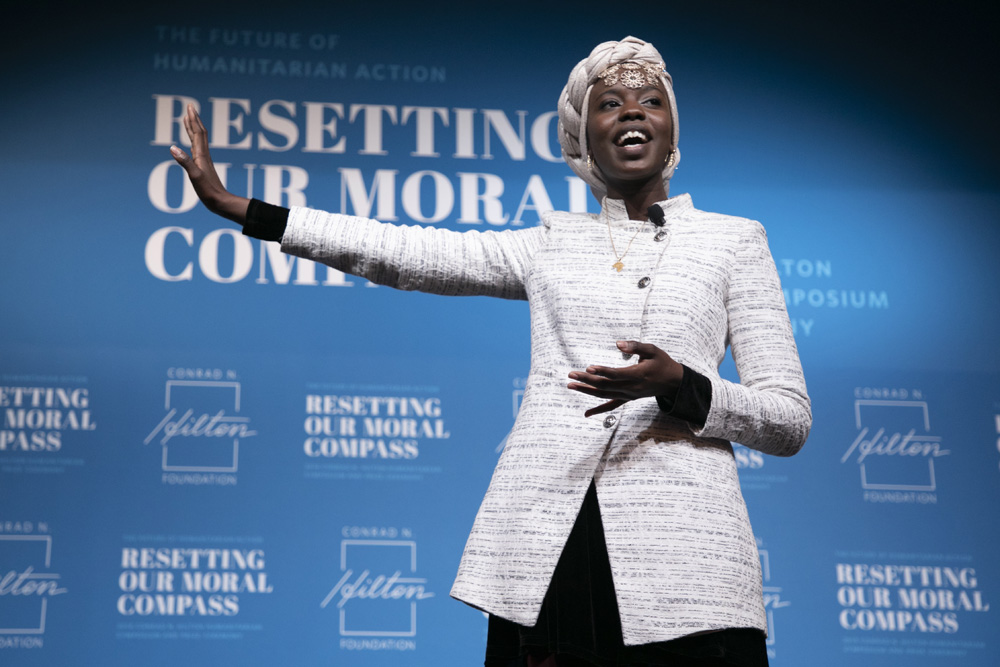 Melissa Fleming, chief spokesperson for the United Nations High Commissioner for Refugees, recounted the painful journey of a Syrian refugee, Doaa Al Zamel, and her fiance, Bassem, who were tricked by smugglers into boarding a dilapidated boat crammed with 500 other passengers. Fleming's book, A Hope More Powerful than the Sea: One Refugee's Incredible Story of Love, Loss, and Survival, traces Al Zamel's life: a peaceful childhood in the city of Daraa near the Syrian border with Jordan; the early years of the brutal civil war that began in 2011, which changed Al Zamel's life and that of millions; and her reluctant decision to seek a better life in Europe at Bassem's urging.

Al Zamel and Bassem's boat sank on its way to Italy after a fishing boat rammed it, its crew shouting obscenities at the refugees. After they floated on the ocean for days on a child's plastic floating ring — Al Zamel in the ring, Bassem hanging onto it — Bassem drowned. Other passengers floating on bits of the boat's wreckage had given her two small children to try to save before they slipped into the sea. A Japanese freighter rescued Al Zamel and the two children, though only one child survived. Al Zamel now lives in Sweden.

Punctuating her talk with descriptions of scenes of refugee camps in Jordan and how barbed wire fences and patrols block the borders of Hungary and other nations, Fleming chronicled how the initial welcome of refugees has given way to fear and inhumane measures to keep out "the other," as well as the sheer scope of the crisis: 68.5 million people forcibly displaced, the most in history.

One of the reasons so many millions are on the move, she said, is because "old wars are not dying, and new ones are starting to rage." 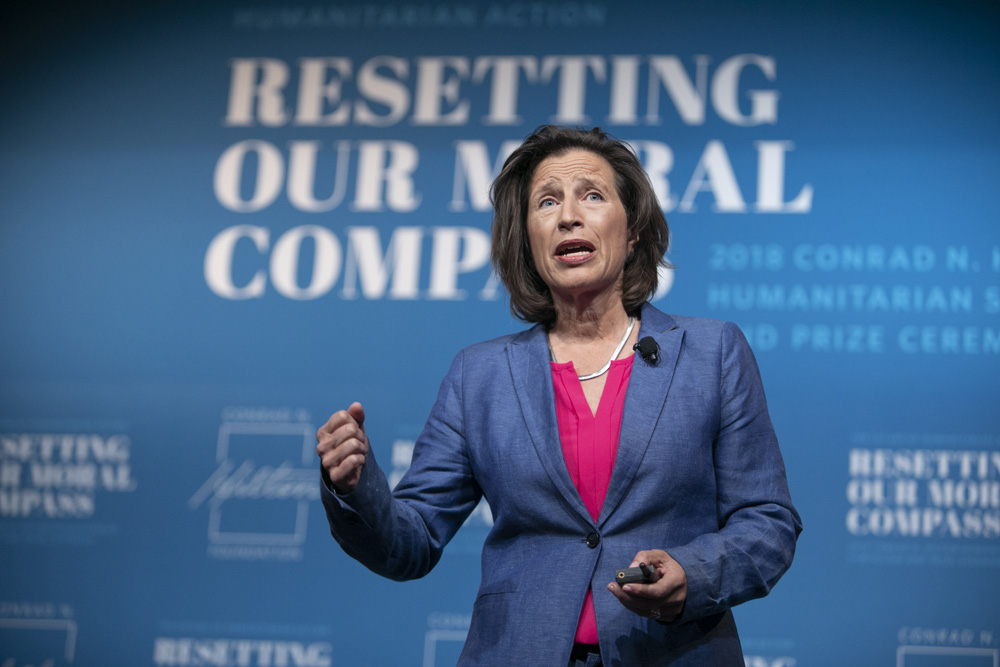 As developed nations pull back on the number of refugees they allow to enter their countries, poorer nations that share borders with conflict-ridden countries have taken in most of the world's refugees, she said.

I thought about the stories GSR writers heard as they talked to refugees for the "Seeking Refuge" series: men, women and children driven from their homes by violence and persecution, caught in limbo as they sought asylum and new lives in foreign countries.

Actress Charlize Theron spoke on a panel focused on how the world is at a critical juncture in the fight against HIV/AIDS, particularly regarding prevention.

AIDS devastated her home country of South Africa when she was a teenager, she said.

"This is a disease that buckled my country at its knees," she said. "AIDS almost obliterated an entire generation of parents, and you had all of these youngsters who were getting misinformation or no information about HIV/AIDS." 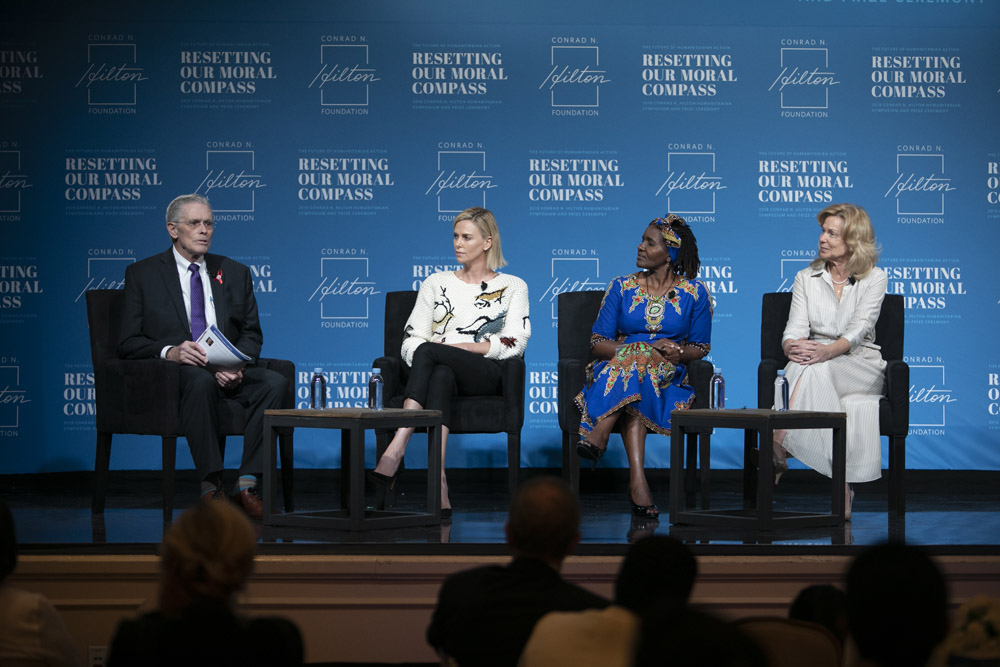 "The answers to a lot of these problems … lies within the youth. We don't listen, we don't ask questions, we push them aside, and they have all the answers," she said. "They know what they need. They know how to flourish. … They're the hardest hit when it comes to AIDS, and yet we don't ever have them take a seat at the table when we make decisions, when we design programs … they're never there. I think it's a huge mistake."

Teresia Otieno, regional coordinator the International Community of Women Living with HIV for North America, who is HIV-positive, stressed the strength of women forming networks to overcome stigmas and ostracization, work also carried out by sisters around the world, including Myanmar, Vietnam and India.

A panel titled "#MeToo in the Humanitarian Sector: #NowWhat" addressed the painful topic of abuses in which sex is demanded for food and other aid relief, as well as sexual harassment and worse in administrative and organizational structures. Moderated by Zainab Salbi, founder of Women for Women International, panel members recounted how some humanitarian organizations have investigated abuse cases and established policies and procedures to prevent and report abuses, but more must do so.

Carrie Hessler-Radelet told of her own experience of being stalked and sexually assaulted by a supervisor as a Peace Corps volunteer when her husband was away. She told her husband but no one else until the third assault, but even after reporting the incident, nothing happened to the perpetrator. Later, as director of the Peace Corps from 2012 to 2017, she oversaw the implementation of a congressional mandate to address sexual abuse within the organization.

Katja Iversen, president and CEO of Women Deliver, said organizations understandably fear "reputational risk" but must address the issue of sexual assault. Ted Bunch, co-founder of A Call to Men, spoke of the need for men to stop objectifying women and treat them with respect, to change cultural ideas of manhood and domination of women. I thought of the humiliation and abuse many sisters have endured from priests and bishops, the need for systems to report and address such abuse, and for stronger recognition, respect and voice for laywomen and women religious in the male-dominated Catholic Church.

Central to the program was the presentation of the $2 million Conrad N. Hilton Humanitarian Prize, the largest humanitarian award given to a nonprofit, to Shining Hope for Communities or SHOFCO, started by Kennedy Odede in 2004 in the Kibera slum near Nairobi, Kenya where he grew up. The organization now provides access to clean water, health care, a girls' school, community advocacy and other programs in the slums of Kibera, Mathare and Mukuru bordering Nairobi, and in the slum of Bangladesh in Mombasa.

Odede and his wife, Jessica Posner Odede, who joined the organization in 2007, are still the core of SHOFCO's programs with an approach, Posner Odede said, to provide critical services to "disrupt survival mode" and create humanitarian action that starts at the grassroots level, conceived and controlled by locals instead of outsiders who think they know what a community needs.

Sisters so often take that approach, living in a community often for a year or more, before starting programs or offering help to really understand the community's needs, and they encourage and inspire local residents to take charge of their lives. For example, in Nairobi's slums, a young woman educated by the School Sisters of Notre Dame started a school for some 400 children and one group of women religious focus on educating boys since there are so many programs for girls. 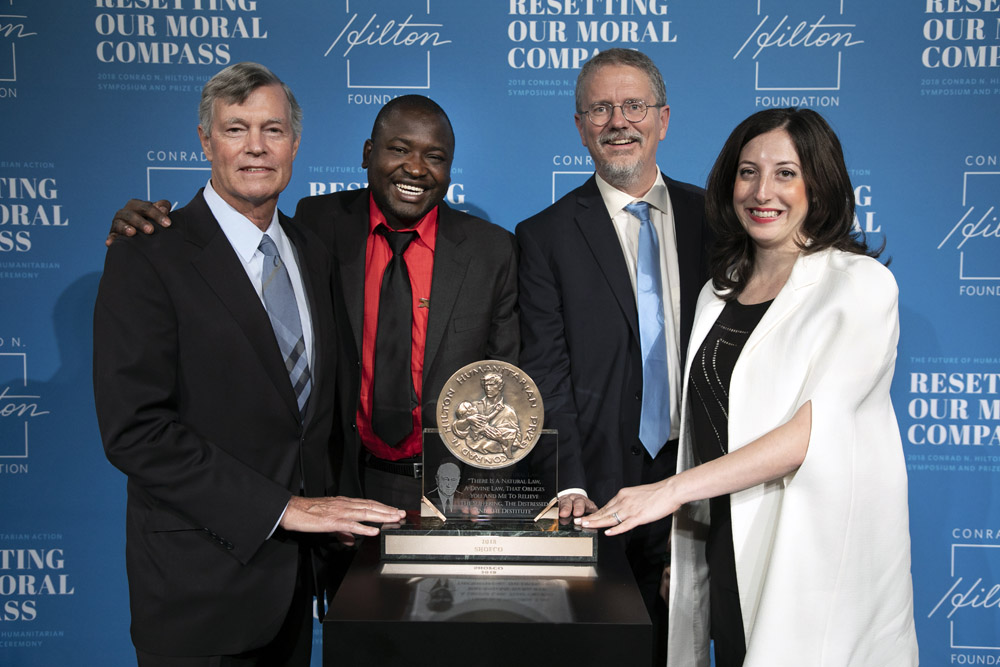 To me, there was only one thing missing on the Hilton symposium program: a sister's voice on one of the panels or among the speakers. Catholic sisters are one of the key funding priorities for the Hilton Foundation, which also funds Global Sisters Report.

"A great deal of thought and consideration go into creating the programming for the Humanitarian Symposium," said communications manager Julia Friedman. "Speakers come from all over the world, and topic areas may or may not align with the Foundation's program areas."

No sister-founded organization has won the humanitarian prize. Nominations for the 2019 prize close Oct. 25.

The recently adopted Catholic Sisters Strategic Initiative emphasizes leveraging sisters' work to create a global sisterhood and their ministries' role in helping achieve the U.N. sustainable development goals. Perhaps with that new approach, there will be more representation of sisters with the program in the future. Still, I left inspired and hopeful.