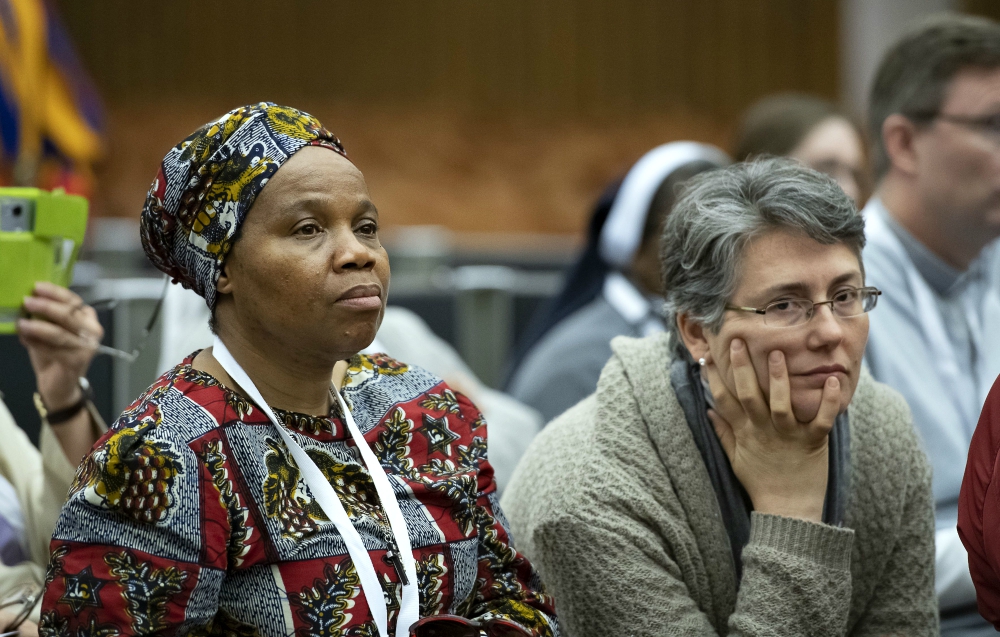 Religious women attend Pope Francis' audience with about 700 consecrated men and women at the Vatican May 4. The religious were attending an international congress sponsored by the Vatican's Congregation for Institutes of Consecrated Life and Societies of Apostolic Life. (CNS/Vatican Media)

Rome, Italy — The news may be a little old already, but I am still stirred by the experience. The paths the event opened are there in front of me!

Listening to and sharing with each other enriched us enormously, and helped us to identify what we all have in common, as well as the differences that our charisms bring to the variety and bounty in the church.

Saturday, we gathered in groups, according to the different forms of consecrated life, and answered some questions proposed by the congregation. One of the questions had to do with the relationship between consecration and mission in our particular institutes.

I found it significant that the indissoluble relationship between charism and mission is essential for all. We all think of ourselves as consecrated for a mission. The particular mission of each institute varies, but we all have the awareness that Jesus did not call us for ourselves, but to send us to the world. Not even contemplative life, which may seem to "move away" from the world, is called for itself. The horizon is always that of the fields that are ripe for the harvest (John 4:35).

Today, as always, we face many challenges. Each period of history has its own, from the Christians of the primitive church until today. Jesus knows that he sends us as sheep in the midst of wolves, to place the light on the lampstand so that it may shine on the whole house, without craving to separate the wheat from the tares by ourselves. But he reminds us not to be discouraged in the midst of trials because he has overcome the world.

Consecrated life is called to make Jesus of Nazareth present in the world in a special way, following him as closely as possible in his lifestyle, with each charism highlighting some feature of the infinite personality of the Master.

In a world in which the borders invented by men are re-emphasized, in which racism is strongly reborn and millions of people are compelled to flee and leave their homes, consecrated life is — as always — prophetic in the attempt to make the kingdom of God present.

Faced with such a challenge, we often feel like David facing a huge Goliath. The congress made it clear to me that unity is strength, and that we consecrated people can be effective in the world by sowing the seed of the kingdom if we do it in communion, working together and praying for one another so that we can be faithful to the specific mission that God has entrusted to each one of us.

The words of the risen Christ resonate in our hearts: "Go throughout the world to proclaim the gospel," "make all the nations my disciples."

As Pope Francis constantly reminds us, an essential clue is to look at the fields and not at ourselves; we need to flee from the self-referentiality that immobilizes and annihilates us, launching ourselves with renewed enthusiasm to the mission: "How beautiful on the mountains are the feet of the messenger who announces peace" (Isaiah 52:7).

Another very important question that was posed to us in the congress was: What would you change in canon law to feel more comfortable with it? The answers of all the groups were enlightening and varied, but there is a common desire to renew canon law to adapt it to our times.

We need structures like those of Gideon, whose army of 30,000 men God reduced to 1 percent: With that 1 percent, God gave Gideon victory over his enemies! Although we still call the 1983 code the "new code," it has in fact become obsolete in many aspects that concern consecrated life.

In those four days, I experienced the Holy Spirit flapping over us with great force, and impelling us to joyfully live our consecration, through the mission entrusted to each one of our institutes.

It is frequently said today that we do not live in an era of changes but in a change of era. Living in such a time cannot be easy. But in other epochal changes that have taken place throughout history, the church has found the way to reinvent itself, by interpreting the signs of the times.

We, as consecrated women of the 21st century, are especially invited to share in this exciting adventure: opening new paths for the Gospel to reach the roots of our cultures, preparing the way for peace, justice and love.

Our consecrated life, inseparably linked to our mission, will make us grow as women of wide horizons and we will bear — as Jesus promised — abundant fruit.

Ministry | Consecrated for a mission