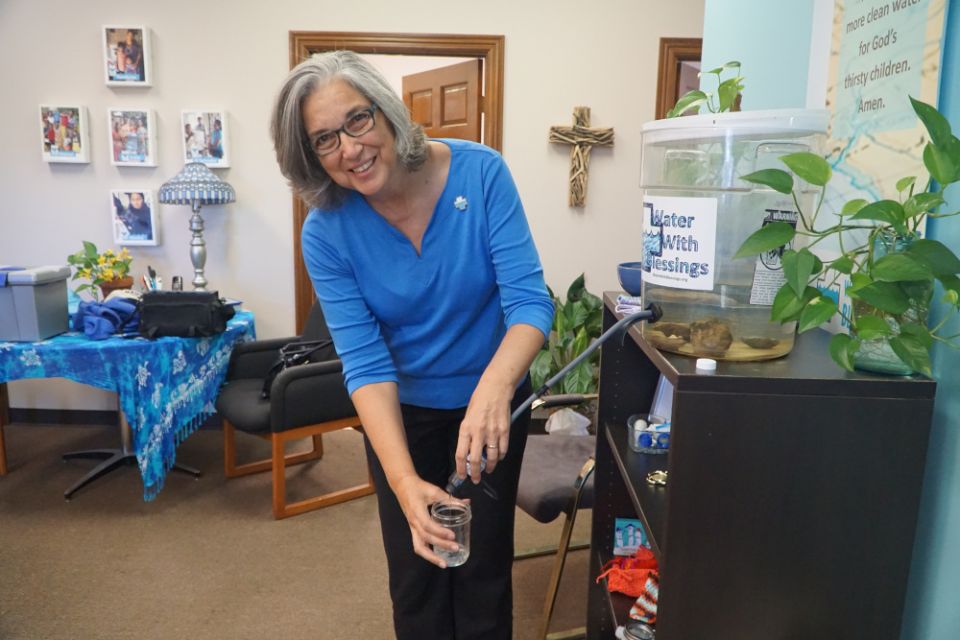 Ursuline Sister Larraine Lauter demonstrates the use of a Sawyer PointOne filter Sept. 5, 2019, in the Water With Blessings office in Middletown, Ky. As the coronavirus digs deeper into Navajo Nation, infecting Native Americans at a higher rate than anywhere in the country, 1,500 miles away a nonprofit in the Archdiocese of Louisville is working to ease the suffering. (CNS/The Record/Ruby Thomas)

Louisville, Ky. — As the coronavirus digs deeper into Navajo Nation, infecting Native Americans at a higher rate than anywhere in the country, 1,500 miles away a nonprofit in the Archdiocese of Louisville is working to ease the suffering.

Water With Blessings — which provides donated Sawyer PointOne water filtration systems to communities around the world that lack safe drinking water — is sending water filters to the Navajo people.

Ursuline Sister Larraine Lauter, co-founder of the nonprofit, said a lack of safe drinking water is making the Navajo people especially vulnerable to COVID-19, the disease caused by the coronavirus.

As of May 26, 4,153 people had become infected with the coronavirus on the vast reservation that spans 27,000 square miles across Utah, Arizona and New Mexico. Of those, 144 people have died, according to the Navajo Department of Health.

A third of households in the Navajo Nation do not have access to safe drinking water, said Lauter. A study conducted by the Centers for Disease Control in 2011 found that 30% of households didn't have running water. As a result, individuals get water from unregulated and untreated sources.

"Clean water is the very basis of health. It's the most fundamental part of access to health. If you are drinking contaminated water or you don't have enough water, the body is that much more vulnerable and it's harder to fight off any kind of illness," Lauter told The Record, newspaper of the Archdiocese of Louisville. "I think that's why they have a very high rate of death."

National news sources reported that the Navajo Nation has the highest coronavirus infection rate per capita in the U.S.

"There are devastating losses," said Lauter, noting that multiple members of some families have succumbed to the disease. "Water insecurity just adds to that."

With that in mind, Lauter said she reached out to leaders on the reservation and offered to donate water filters.

Knowing that native peoples have not always had good outcomes from outside interference, she went about it cautiously, she said.

"I didn't want to proceed without official acceptance and approval from the Navajo Nation leadership. I wanted to be sure we had a very respectful, official relationship established," noted Lauter. The people were "cautious" but "friendly" and are interested in obtaining the filters.

The challenge is that they are working around the clock to pack and deliver food and water to families in remote areas, said Sister Lauter.

Water With Blessings is working with the Navajo Nation's Department of Justice and was on track to send 500 filters soon, but doesn't intend to stop at 500, said Lauter. The nonprofit has raised more than $38,000 to fund them so far. Each filter costs $75.

The organization also is working with individuals in that department to develop a plan for members of the Navajo Nation to train their people to use the filters.

Since its inception, Water With Blessings has had a distinct distribution and training model. Typically, it trains "Water Women" in groups and ask that they make a covenant with God to share a filter with three other families.

This model will be altered a bit due to circumstances created by the pandemic, such as social-distancing norms, and because families on the Najavo reservation typically live dozens of miles apart. Lauter said there are 47,000 households spread across 27,000 square miles.

She will talk to filter recipients about "paying it forward" and ask them to consider, "What will they do spiritually for someone?" she said.

Though many individuals in the community have been generous, Water With Blessings is still in need of donations, said Lauter.

Millions of renters owe billions of dollars. Sisters are doing what they can to help