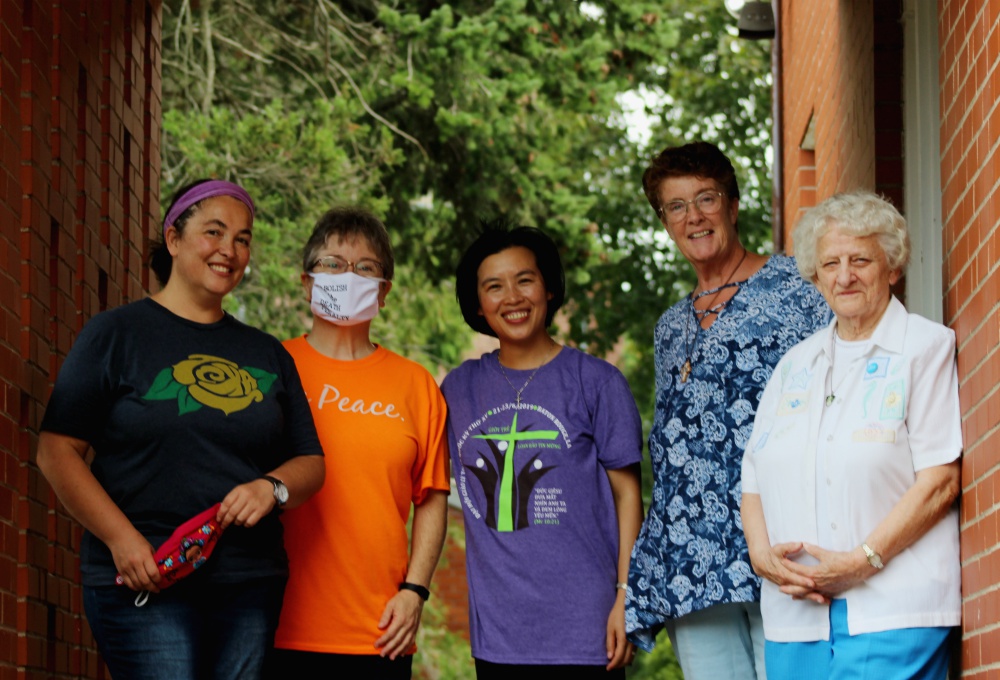 When Cathy Buchanan arrived at the Dominicans of Peace house in New Haven and immediately went into quarantine, it was Sr. Julia Grey, the oldest member of the community, who carried meals up to her room on the third floor. "She did it in such a loving way," said Buchanan. "She was like 'No, I'm happy to do this.' "

For her part, Grey expressed appreciation for the opportunity. "She [Buchanan] was very gracious about it," said the older nun, who goes by Sister Julie.

One of two houses set aside by the order for women interested in exploring a potential call to life as a sister, the House of Welcome (also known as the House of Discernment) sits behind St. Stanislaus Catholic Church in the bustling New England town.

Four of the residents are Dominican Sisters of Peace. Another, Sr. AnHoa Nguyen, is a member of a Vietnamese community, the Lovers of the Holy Cross. She's staying with the New Haven Dominicans while she completes a theology master's degree at Yale Divinity School.

Though they reflect the diversity of vowed life in generation, ethnicity and temperament, the five women who live here call themselves the "quaran-team." In addition to a sense of humor, they share an apparent commitment to embracing their differences as they explore facets of religious life together. 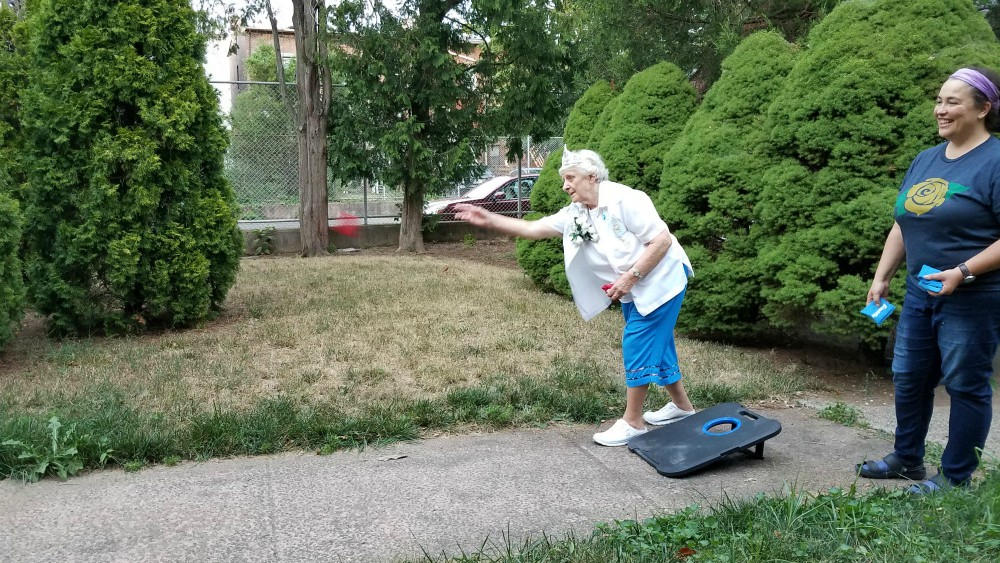 Most newcomers to religious life haven't entered a community during a public health emergency. But after multiple visits and conversations with congregations over several years, Buchanan and the Dominican Sisters of Peace had made a mutual decision: She was to enter their House of Discernment in New Haven, Connecticut, as a candidate.

That was back in March — just as COVID-19 began to sweep the country. But it wasn't until late July that she arrived at the convent, having left her job as a pastoral associate in a New Jersey parish. Connecticut had imposed a mandatory self-quarantine period for people from states with a high COVID-19 positivity rate, so Buchanan then immediately began two weeks of self-isolation.

Grey, 81, began her journey to become a sister at age 17 in the mid-1950s, entering religious life at the Dominican Sisters of St. Catharine in Kentucky (one of the founding congregations of the Dominican Sisters of Peace). It was a time when religious women spent many of their formative years without much contact with the secular world and without a significant degree of autonomy. Her entire adult life has been spent in a religious community. 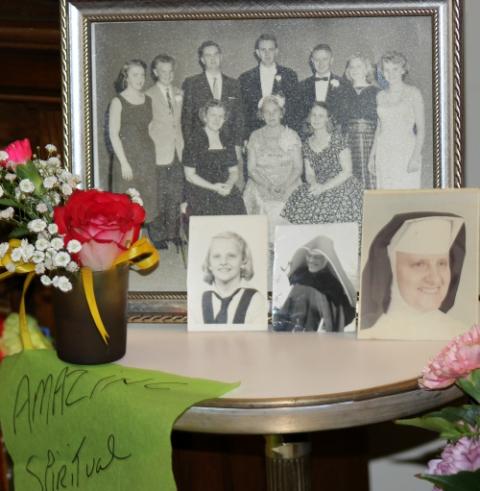 At a party on Aug. 15, the New Haven community assembled a festive grouping of pictures, candles, produce, flowers and other materials to celebrate Sr. Julia Grey's 60th anniversary as a Dominican. (Elizabeth Eisenstadt Evans)

The younger sisters have had opportunities for study and prayer that are "far more sophisticated" than when she was younger, said Grey. "It's sort of like I'm learning along with them."

After she left the Pennsylvania retreat house where she had served for many years, she was looking for a setting that would enable her to continue her work as a spiritual director and reunite her with her own religious community, said Grey.

Recently, the community celebrated her 60th year in religious life at the convent, complete with a virtual reunion with many of her compatriots in other parts of the country.

Drawn by the fact that the New Haven center is a community set aside for formation, or spiritual growth, Grey added that she was also looking for a way to use her gifts without the rigors of a full-time salaried post. "There's just a wonderful spirit in the house, there's more intentionality, I mean, in terms of relationships." In addition to sharing shopping, cooking and cleaning chores, she said: "We work hard, and we do things that are in common. We're very concerned about each other." 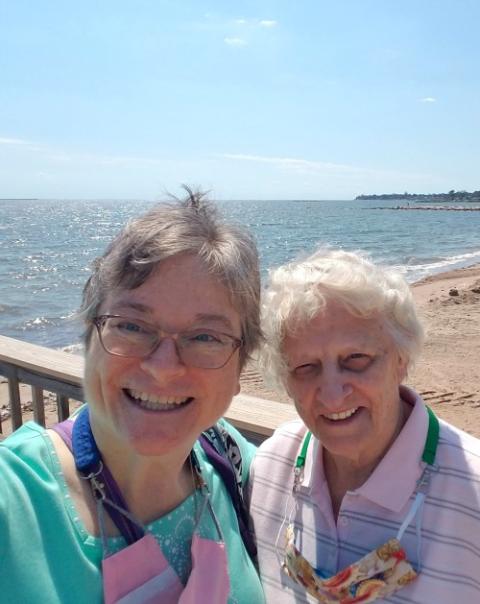 Sr. June Fitzgerald is part of the order's vocation team. In normal times, Fitzgerald would spend a lot of time on the road working with women contemplating religious life. The upside of pandemic travel limits, she said, is that she gets to spend a lot more time with her community.

"It's very nurturing for us," Fitzgerald said. "We all found we had more time for prayer, community time, and faith sharing. We really believe having a life rooted in prayer helps."

When last seen on the pages of Global Sisters Report, Ana Gonzalez was about to head off from New Haven to St. Louis, to enter the collaborative novitiate the Dominican Sisters of Peace share with other Dominican religious groups in the United States.

Now Sister Ana Gonzalez, she returned to New Haven after several years to assume a position as coordinator of international admissions at Albertus Magnus College, a liberal arts school founded by the Dominicans in New Haven.

After two years in temporary vows, said Gonzalez, she continues to be thoughtful (and prayerful) in exploring the next step.

"One thing I hear from community members is that discernment doesn't stop," said the 40-year-old. "Wanting to cross things off our list is not something we do in religious life."

"You keep discerning until you reach the other side," said Sr. Joye Gros, who served as novice director for Gonzalez during her novitiate year in St. Louis. "When you make vows, it's not over. You grow into them."

Part of her journey, said Gonzalez, is appreciating the gifts of the women in her house. Grey's skill as a spiritual director comes in handy in difficult times, she said. "In her kind and compassionate way, she listens to me and she helps me to continue discerning. My tendency is to be 'me,' [but] she reminds me: What is God trying to tell you?"

Asked what she brings to the community, Gonzalez said she brings the wealth of her multicultural upbringing and a global perspective. When her turn comes around to cook dinner, she said, she "loves that the community is open to eating the food that I grew up with," including enchiladas and refried beans, as well as conventional American fare.

Gonzalez added that she appreciates the experiences Nguyen, a member of an international community of sisters, offers her and the other Dominican sisters. The risks and challenges taken by the founder of the Lovers of the Holy Cross congregation hundreds of years ago inspire her "on my journey into an uncertain future. If I hold on to God, all will be well."

"I love the fact that I'm able to live in an intercongregational community grounded in the love of God."

The New Haven women expressed equal appreciation for Gonzalez's energy and extroverted personality. "Ana brings her Mexican culture with her. She's a vibrant Latina, and I've learned so much from her," said Fitzgerald.

When Nguyen moved to the United States from Vietnam to study, she began her educational odyssey in Chicago, living with a group of Polish Dominicans. "I learned to say, 'How are you?' " in Polish, said the 38-year-old. 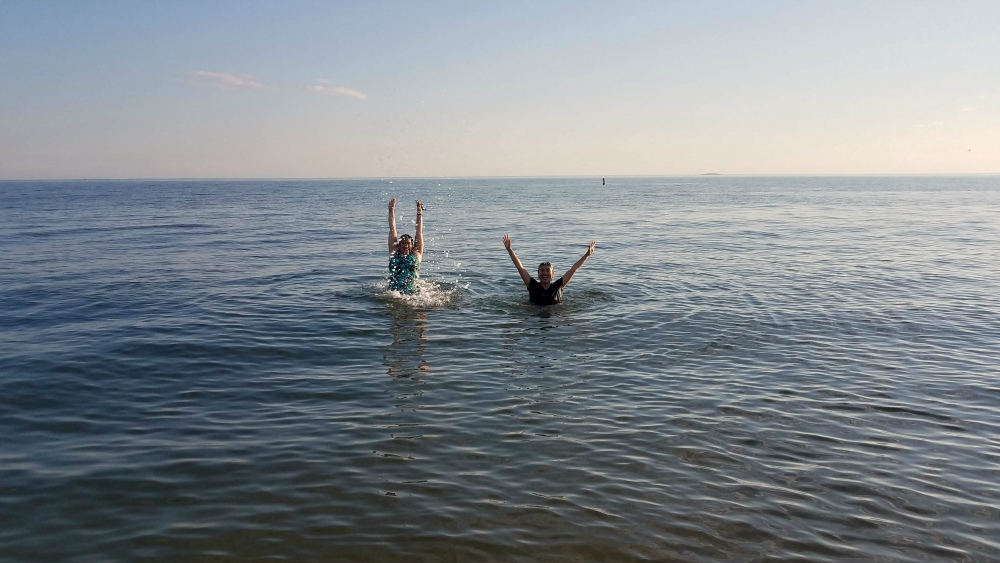 While her Vietnam order follows a schedule that adheres to the monastic hours (she rises earlier over there), she said the New Haven sisters have taught her about working for justice and promoting the value of higher education. She has also attended several vocational conferences organized by the sisters and has come to appreciate even the value of a Zoom conference, she said.

When she arrived, said Nguyen, she was assured that if she got on well with the other sisters, she would be welcome to stay through the duration of her studies. After a semester, they told her, she said, "AnHoa, you are always welcome. You are easy to live with, a determined sister who helps us to see the beauty of prayer in the community, cares for others, and brings the beauty of another culture."

An eager and experienced gardener, Nguyen has also been a real asset in the plots that lie between the convent and the church rectory. 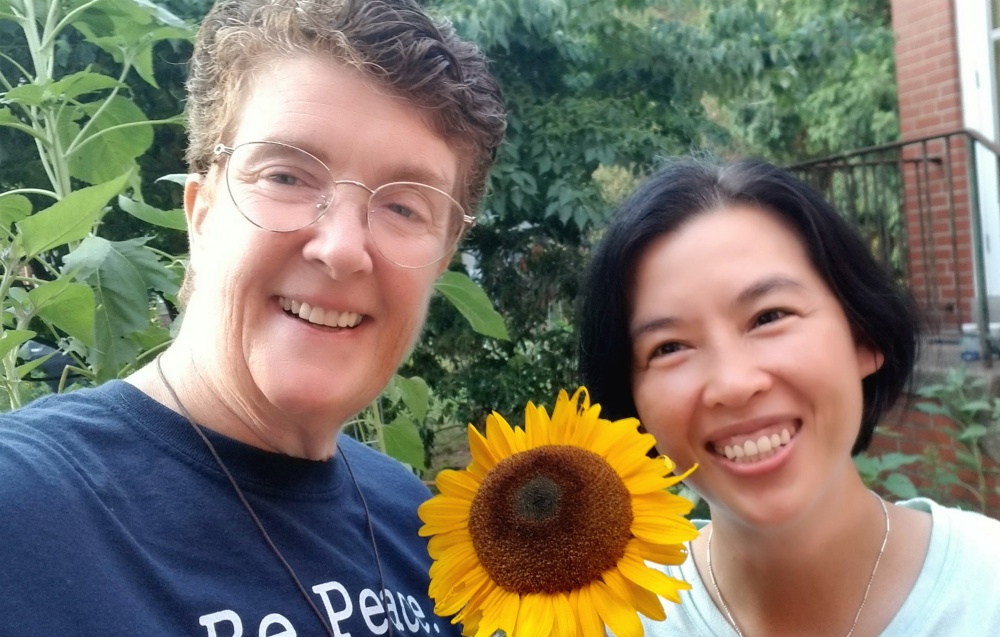 "I am grateful for my ministry," she said, "and for my New Haven family."

While in former times, women would bring a "patrimony" like clothes or financial donations with them, she noted, women today bring education, life experiences and cultural diversity.

Then there is the most recent arrival.

Newcomer Buchanan, 55, notched up 27 years working in New Jersey prisons before getting a master's degree in pastoral ministry and becoming a pastoral associate. 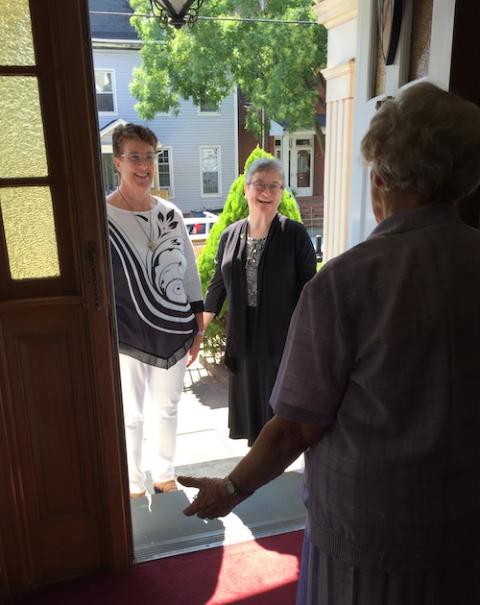 In a process that would have been hard if not impossible 50 years ago, Buchanan's road to New Haven entailed two years of "active discernment" and conversations with vocation directors from six communities.

It's been a learning experience, after living for so many years on her own, to navigate boundaries in a new community, said Buchanan. "I'm an extrovert. The challenge is knowing when to be quiet."

On the other hand, she said, it's an "unexpected blessing just to come home and have a home-cooked meal, and just to share your day with other women, to have people genuinely interested in what your day was like."

With six decades of experience in community life behind her, Grey is enjoying the companionship of sisters in her own congregation after most of a working life spent in service away from them.

She's conscious that at some point, should her health fail, she might have to leave New Haven and go to the motherhouse in Ohio or return to St. Catharine's in Kentucky, where her journey in religious life began, Grey said. But after being away from her community for so long, "I realize how much I've missed."