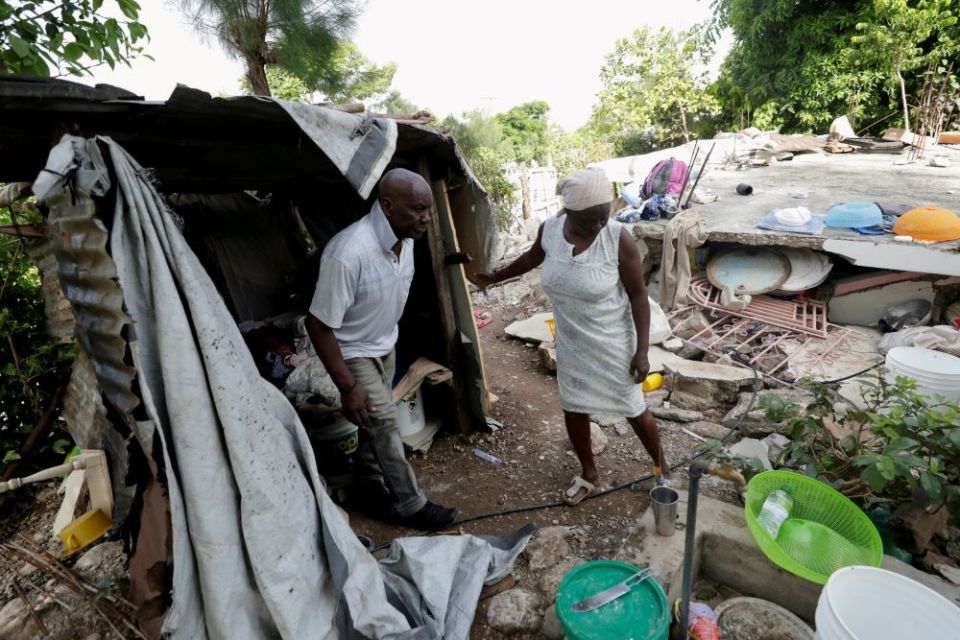 Sisters in Haiti are doing their best to continue their ministry and respond to emergency needs after the Aug. 14 magnitude 7.2 earthquake. Here, Manithe Simon and his wife, Wisner Desrosier, walk through their collapsed home near Les Cayes, Haiti, on Aug. 22. (CNS/Reuters/Henry Romero)

The recent earthquake in southern Haiti poses yet another serious challenge to the work of a Haiti-based congregation that had been struggling before the latest disaster, said the mother general of the 180-member group.

"I don't know what I can say. The problems sometimes seem too big," Sr. Denise Desil, who leads the Little Sisters of St. Thérèse of the Child Jesus, said in an Aug. 27 telephone interview with Global Sisters Report.

But, she added, sisters affected by the Aug. 14 earthquake are doing their best to continue their mission through makeshift clinics.

Desil said missions in several communities, including the city of Baradères, were severely damaged and will require extensive rebuilding. However, she said no one was killed at a collapsed clinic and hospital run by the sisters in Baradères despite high numbers of casualties in the city.

Desil said about 20 sisters minister in southern Haiti, and all are sleeping outside under tents because their convents were damaged.

However, "it's not safe under the tents now," Desil said, referring to the continued insecurity in the country from increasing social unrest in recent years and months. "I'm really worried about that."

As she is about a host of other challenges.

The country has still not recovered fully from a devastating earthquake in 2010. Adding worry to the worsening security situation was the July 7 assassination of President Jovenel Moïse. Then came the magnitude 7.2 earthquake on Aug. 14, which killed an estimated 2,200 people, followed by Tropical Storm Grace on Aug. 16. (The storm later became a hurricane and made landfall in Mexico.)

There is also the ongoing threat posed by the COVID-19 pandemic, which resulted in the death of three Little Sisters of St. Thérèse.

"We have more and more challenges," Desil said. 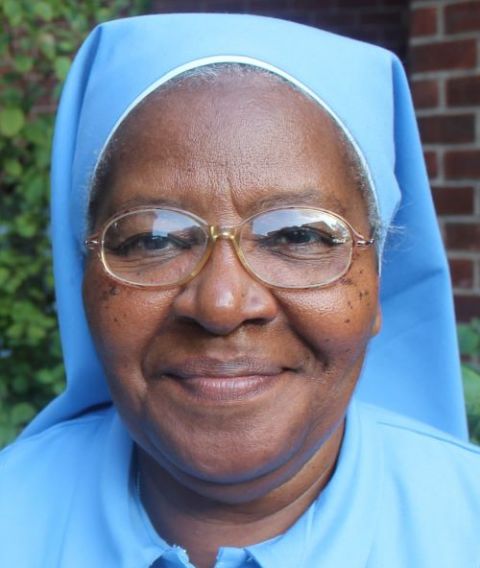 Desil said immediate needs include providing food and shelter, and the congregation is raising money to aid earthquake survivors.

In the Aug. 24 donor report, the congregation reported that a sister-run home for about 100 senior citizens in the city of Marfranc in western Haiti is "having a very difficult time finding food, medicines and have a need to build a kitchen to feed the elderly."

A congregation-run school in southern Haiti did not sustain major damage, but "many of the students have come to the sisters and told them that their houses are gone. Some have lost family members. They will need help to rebuild their little houses."

In addition, the report said, "many of the sisters' families who live anywhere in the south of Haiti have lost their homes to either the earthquake or the hurricane."

Desil told GSR that the sisters who experienced the earthquake were traumatized but have found spiritual sustenance.

"Prayer is good, and it's essential now," she said.

But she said the latest challenges postpone long-term efforts and projects, such as rebuilding a small congregational house in the Haitian capital of Port-au-Prince that was destroyed in the 2010 earthquake.

"It's a very difficult time right now," she said.

"I don't know what I can say. The problems sometimes seem too big."

In an example of solidarity between congregations, the Sisters, Servants of the Immaculate Heart of Mary, or IHM Sisters, in Scranton, Pennsylvania, said they are assisting the Little Sisters of St. Thérèse's earthquake response. This is an extension of the Immaculate Heart of Mary sisters' efforts in the last seven years to support the work of the Haitian congregation, according to the community's website. That collaboration has raised more than $100,000 to support sister-run clinics, schools and feeding programs.

Other congregations responding to needs in the wake of the recent disaster include the Sisters of Charity of St. Elizabeth in New Jersey.

Dawn Colapietro, a lay missionary for the Sisters of Charity, told GSR that the congregation's school near Croix-des-Bouquets, which is about 15 miles northeast of Port-au-Prince and was not damaged in the Aug. 14 earthquake, "housed and fed 30 families during Tropical Storm Grace and 'tarped' a few homes that had their roofs blown off."

Congregation personnel also traveled to the earthquake-affected city of L'Asile in southwest Haiti "and bought enough food and water to distribute to over 100 families. We are also buying tarps and wood to help provide temporary shelter to those who lost homes. We are now trying to raise money for funeral costs."

Colapietro said five teachers from the school in Croix-des-Bouquets lost family homes and six family members died in the earthquake.

Amid such tragedy, she said the pediatrician who works at a congregational-run clinic is temporarily working for the humanitarian agency Medicines for Humanity that has medical clinics in areas devastated by the earthquake.

The situation is "heartbreaking," she said.

The Life, at seven months old, keeps on asking questions

Q & A with Sr. Lisha Chiramattel