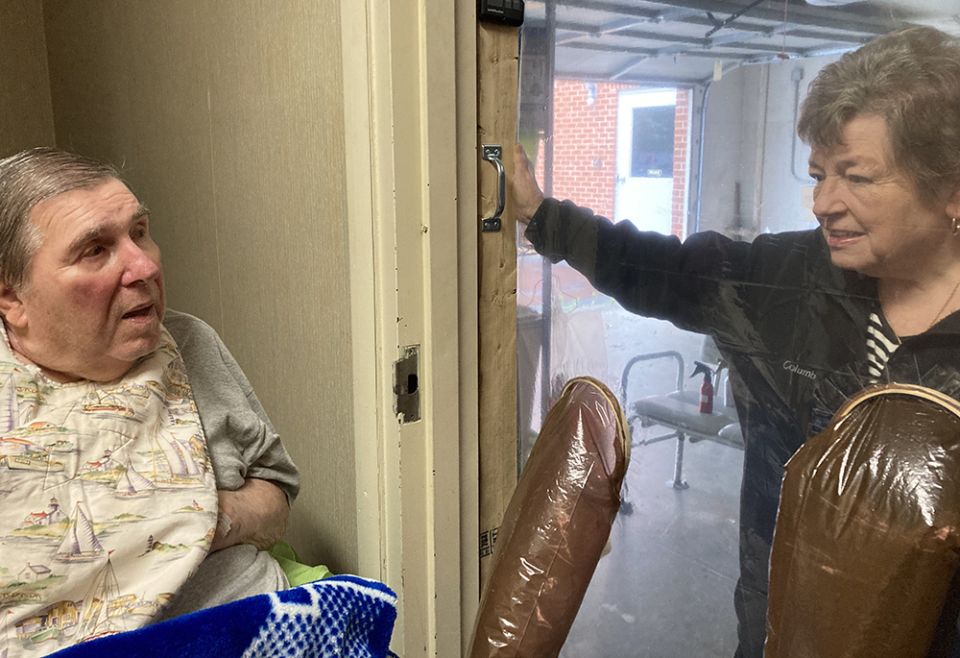 Editor's note: A version of this Q&A was previously published on the website of the Diocese of Lexington, Kentucky.

Woodford County, Ky. — As the world began shutting down in March 2020 due to the COVID-19 pandemic, a small congregation of the Sisters of St. Joseph the Worker in eastern Kentucky devised a way to prevent the virus from affecting the residents of Taylor Manor, a Catholic nursing home they run.

Taylor Manor began in 1958 in Versailles, Kentucky, when life-long resident Ophelia Taylor Hoppins died, leaving her entire estate to the Diocese of Covington with the purpose of creating a long-term care facility, according to Sr. Christina Murray, mother superior of the congregation's Walton, Kentucky, motherhouse. Hoppins wanted the facility to retain the name Taylor Manor. Today the nursing home has 35 elderly residents, ages 70 and older.

Although not a Catholic, Hoppins had attended a Catholic boarding school for one year, and often spoke about her fond memories of the nuns, according to Murray. Taylor Manor was owned by the Diocese of Covington and initially operated by another congregation. In 1976 when that congregation could no longer staff the facility, the Sisters of St. Joseph the Worker were asked to run it.

The Sisters of St. Joseph the Worker congregation was approved by Rome on May 1, 1974. It was founded by Mother Ellen Curran and Bishop Richard Ackerman of the Diocese of Covington with ministries focused on health care and education.

Eventually the diocese gave ownership of Taylor Manor to the Sisters of St. Joseph the Worker when the Diocese of Lexington was created. Versailles, (population 9,251, according to the 2020 U.S. census) is 13 miles west of Lexington and is a suburban community known for its horse farms and several flavorful Kentucky bourbon distilleries.

Sr. Mary Faustina Zugelder is the administrator of Taylor Manor, which was recognized in September 2021 with an award for how it remained accessible to residents and their families during the pandemic. 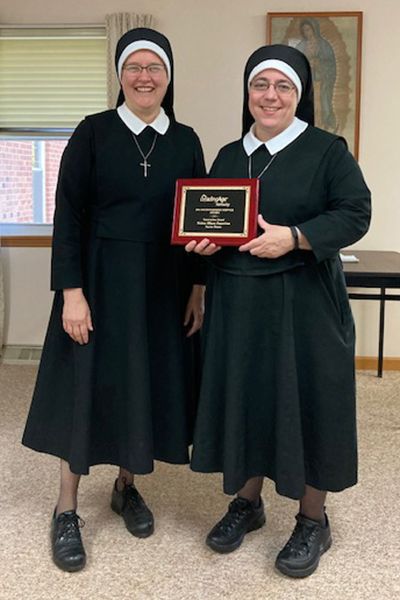 Sr. Mary Faustina Zugelder holds the plaque from Leading Age Kentucky, which recognized the innovative way of allowing family members to visit residents while observing social distancing and safety protocols during the COVID-19 pandemic. To her left is Sr. Christina Murray, mother superior of the Sisters of St. Joseph the Worker's motherhouse in Walton, Kentucky. (Courtesy of the Sisters of St. Joseph the Worker)

Zugelder received a plaque for devising a unique way of social distancing for both the residents and their visiting families. The method, which involved a simple curtain and wood frame barrier, effectively enforced social distancing regulations and helped keep Taylor Manor occupants safe. The long-term care facility has operated this way for over two years.

Although six clients tested positive for the virus during the pandemic — and the facility's priest, Fr. Frank Sherry, had to quarantine at one point — only one resident actually developed symptoms. Most important is that no one in the facility died from it.

Zugelder is assisted on weekends by Murray, who is a registered nurse and also serves as the director of nursing. Murray humorously describes herself as, "the boss," but to the other sisters she is the person who does everything — cooks, cleans, gives shots, etc., because, said Zugelder, "this is what nuns do."

Zugelder and Murray were interviewed for this article.

GSR: How much do — and did — your residents depend on personal contact during the shutdown?

Zugelder: At this stage, in their lives, quite a bit, and for those who have that type of support from their husbands, wives, children and grandchildren, this [the family visitation] is an almost daily thing.

We are not a rehab center — we take care of those who are sick and dying — which is why COVID made the situation so hard. I rigged up a phone system [with the help of our center's activities staff] equipped with headphones, that allowed our residents' families to still visit them and those with dementia to still hear a loved one's voice.

Considering the toll that dementia takes on a family member stricken by it, one has to consider even this simple idea a tremendous gift. 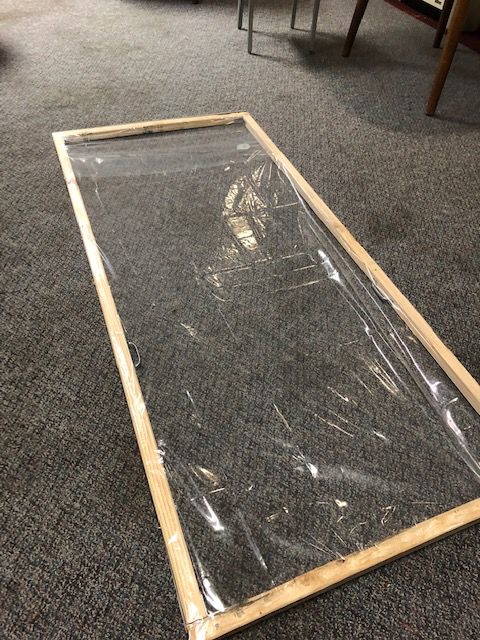 This is an example of the barriers constructed by the center's maintenance man, David Reed, who used wooden frames and plastic. A local veterinarian supplied long gloves which allowed family members to stick their hands through the curtain. (Courtesy of the Sisters of St. Joseph the Worker)

How did the curtain idea itself come into being?

Zugelder: I saw on the Internet where a mother had set up a curtain in her front yard for the grandmother's visits. The children got a hug from her and were allowed to see their grandmother as well. I thought to myself, "We could do that here," and in the end it became a big deal; just being able to reach out and touch your loved one.

The center's maintenance man, David Reed, built three wooden frames that the plastic frame could stick to, and a local veterinarian supplied long gloves which allowed family members to stick their hands through the curtain.

What was the result of all of this effort?

Zugelder: Actually there were several rewards, because this was such a big deal. First, our residents just getting to touch and squeeze somebody, then the success of our never having got COVID, and although there were residents who did pass away naturally, no one died from the virus.

How did people respond to being vaccinated?

Zugelder: We received word about our getting the vaccine three days before Christmas in 2020, and then permission forms had to be gotten, papers signed by family members, etc.

Yes, people were afraid of it, but they also knew that we needed it, and in the end 70% of the residents took it at the outset, 99% received it overall, and most of the staff were vaccinated right away.

As for me, to set an example, and out of love for our employees, I had no choice. 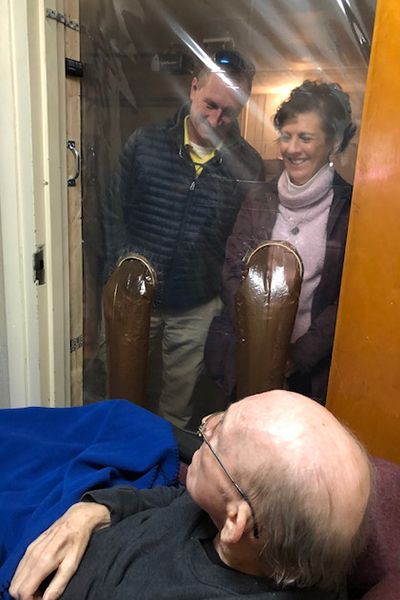 How did you react to the first news that COVID-19 might be approaching our country?

Murray: I have to admit that at first I had a rather flippant attitude, something like, "This is the United States and our health care system will take care of it, and besides, right now it is in Italy."

As it got closer however, I thought, "This is the time to change that arrogant attitude," and start praying. I also took medicines to the patients — who at times did wear masks — and did everything to see that they were not afraid.

How did you react to the news that Sister Zugelder was to receive the award?

Murray: I was the one who submitted her name to the Leading Age Kentucky people, and I heard back from them pretty quickly. She was the only one who did this — devising a method of safe visiting — here in the state, and I had to submit her name for her and the residents.

What did you take away from this trial — assuming that the worst may be behind us?

Murray: The biggest thing for me was being aware of the people around you, and seeing Sister do this important thing. Socially and spiritually we are body and soul, and letting someone know that he or she was not alone is important.

And with you, Sister Zugelder?

Zugelder: I discovered how important it was for families to see those people whom they loved — to see those staff here dressed up to give Communion because people needed it. And lastly, I learned not to make decisions out of fear, because fear is a tool of the devil.

Q & A with Sr. Sonia Zuleta Ruiz, running an orphanage for girls in Medellín