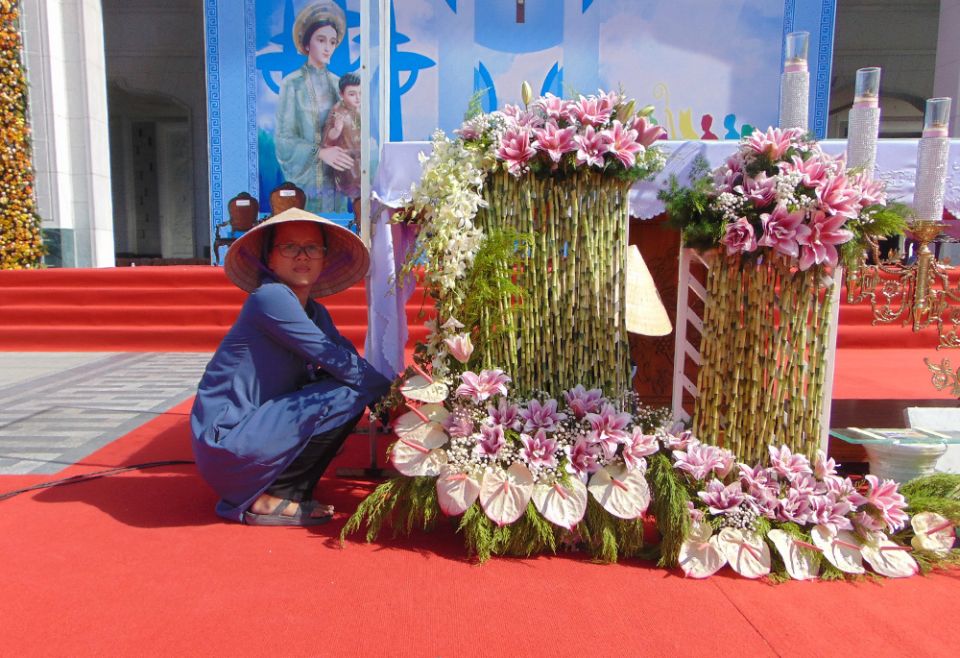 Sr. Agnes Nguyen Thi Tuyet Suong arranges flowers on a stage at the national Shrine of Our Lady of La Vang in Quang Tri province, in Vietnam. (Joachim Pham)

LA VANG, VIETNAM — Hundreds of sisters from various congregations in Vietnam volunteered to provide material and emotional support for tens of thousands of pilgrims at a Marian shrine.

Lovers of the Holy Cross of Hue Sr. Agnes Nguyen Thi Tuyet Suong and six other nuns were soaked in sweat in the scorching heat while carefully arranging tuberoses and Madonna lilies on the main stage.

The sisters, wearing leaf-conical hats, had to look after more than 1,000 flower pots surrounding decorated altars, stages and statues at the national Shrine of Our Lady of La Vang in the central province of Quang Tri.

The Blessed Mother is believed to have appeared in the forests now called La Vang in 1798 to console Catholics seeking to avoid persecution by authorities. In 1961, the bishops of Vietnam declared the site a national shrine.

Hue Archdiocese, which runs the shrine, reported that more than 50,000 Marian devotees — including followers of other faiths — attended special celebrations Aug. 14-15 to mark the feast of the Assumption of Mary. This was the first time the great number of pilgrims have flocked to the shrine after the tight restrictions on the prolonged COVID-19 pandemic eased up. 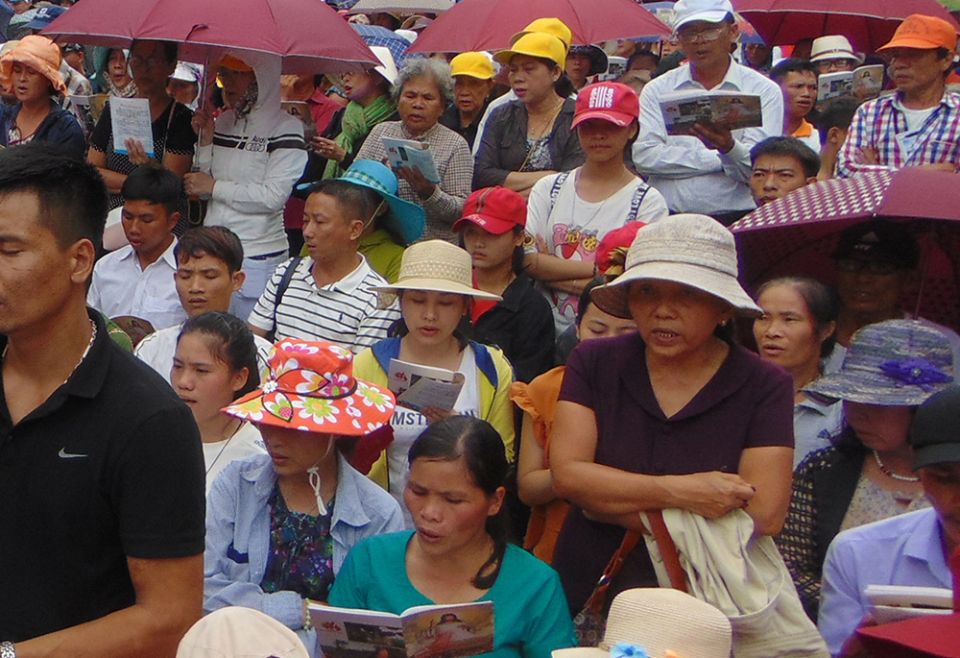 Marian devotees, including followers of other faiths, pray at the national Shrine of Our Lady of La Vang. (Joachim Pham)

"The bright colorful flowers displayed on the feast of the Assumption of Mary are the great joy of us and all people here, because that is our tradition to show our filial piety to Mother Mary," Suong said, adding that the heat posed a challenge to the floral arrangements. (Shoppers from Da Lat, home to flower producers, donated the flowers.)

"We feel tired but delighted to serve Mother Mary and her children here."

Suong said 80 sisters from the Lovers of the Holy Cross of Hue started to work at the 222-year-old shrine one week ahead of the solemn feast with the theme "Mother Mary — Example of Synodality." They practiced plays and dances, decorated stages, altars and bases, and prepared accommodations, food and drinking water for pilgrims. They also sold Christian statues, pictures, books, rosaries, paper fans, herbal oils, leaf-conical hats and other souvenirs produced by nuns.

"We appreciate those vulnerable people who try to visit the shrine, so we do something useful for them as a way to comfort them," a volunteer said.

Sr. Anna Tran Thi Hong from the Filles de Marie Immaculée (Daughters of Mary of the Immaculate Conception) said that 60 nuns were involved in cleaning the shrine, serving food to hundreds of priests and bishops, offering heath care, and receiving money and intentions of prayers from pilgrims.

"We try to keep the holy site clean and beautiful and raise public awareness of the environment protection," the 41-year-old nun said. "We hope they will keep their home parishes clean after they return to their homes."

Sr. Teresa Do Thi Ha, a doctor, said 30 nuns and doctors (many of whom were sister-doctors) from a public hospital provided medical care for those who suffered heat stroke, heart problems, digestive disorder, epilepsy and other illnesses, and transferred severe cases to hospitals.

"We served pilgrims with the kind heart and helped them gain spiritual experience from the pilgrimage," Ha said, adding that nuns also prayed to Mother Mary to bless pilgrims' intentions. 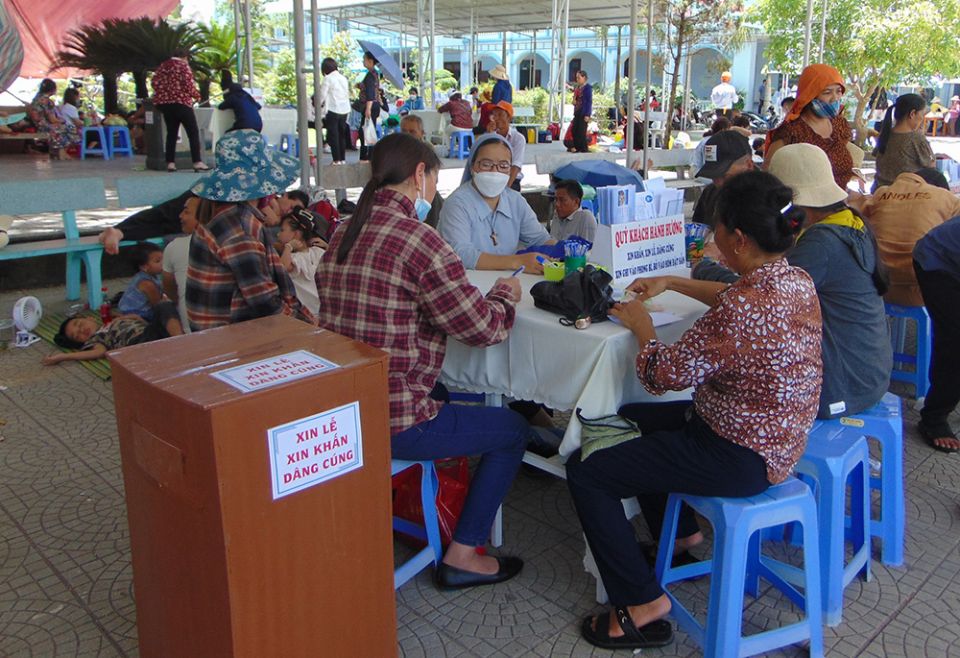 Pilgrims make donations and give their intentions of prayers to a nun. (Joachim Pham)

While roughly a dozen sisters helped illiterate people write down their prayer intentions, most pilgrims thanked God and Mary for saving them from the coronavirus pandemic, for their jobs and studies, or for their relatives to give up drug abuse.

Nguyen Thi Loan, a 56-year-old Buddhist from Hue, said she rode a bike to the shrine and prayed to Mary for her daughter to give birth safely.

Loan, mother of three, said she has visited the site for three decades as Mother Mary answers her prayers and blesses her family.

"We owe a debt of gratitude to Mother who heals my chronic stomachache and offers us jobs for a proper living," she said.

During the two-day pilgrimage, Marian devotees went to confession and attended open air Masses at the Divine Mercy Square in front of the Our Lady of La Vang Basilica. Many architects, engineers, sculptors and artists designed the basilica with native architecture — including Ba Ria Dominican Sr. Mary Vu Thi Bich Hang and Daughters of Our Lady of the Holy Rosary Sr. Anne Nguyen Thi Kim Dung, both experts in fine arts. 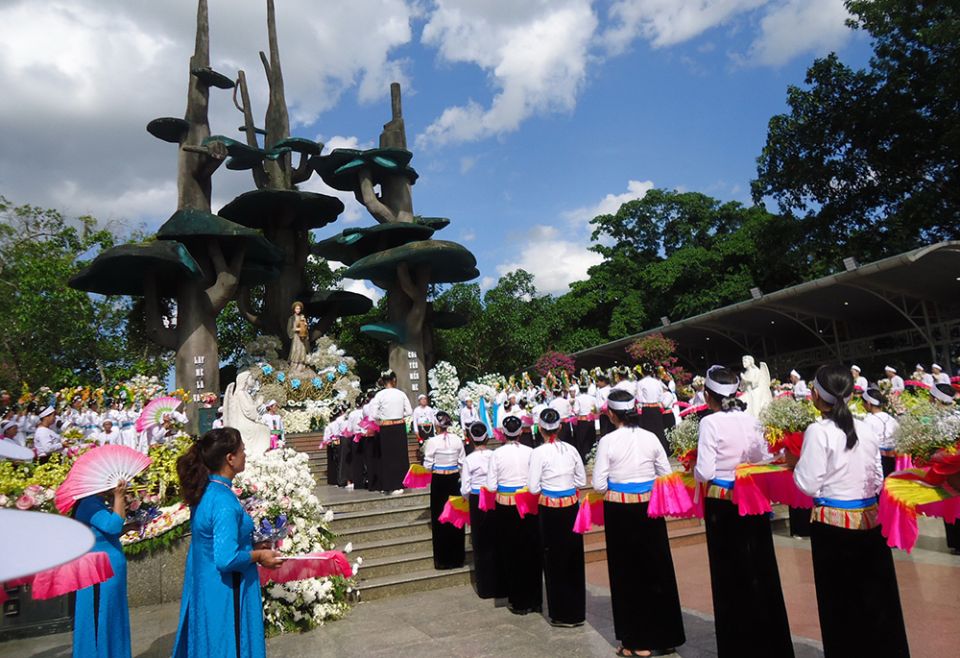 Women in traditional clothes dance with fans and flowers in front of a big statue of Our Lady of La Vang. (Joachim Pham)

The major church still under construction is expected to be inaugurated next year during a Marian congress.

Pilgrims also listened to talks about Mother Mary's examples of journeying with the church, offered flowers and incense, recited the rosary and prayed around the clock under a big statue of Our Lady of La Vang, depicted in a Vietnamese style carrying Jesus. They rested in makeshift tents under big umbrellas and trees around the site. 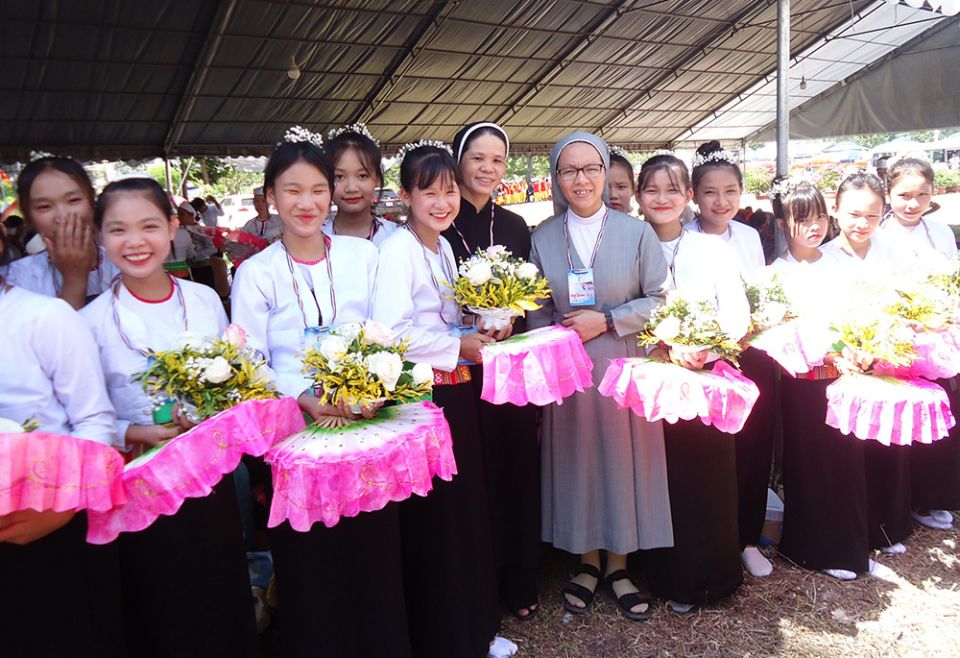 Hien said they combined their traditions with Catholic values, having spent one month preparing for their performance.

The Muong nun said Muong tribes use the sound of gongs to communicate with the heaven, earth, gods, ancestors and one another, and pray for wealthy communities, good harvests, and peaceful life.

Some 2,300 volunteers including 175 nuns from six congregations served pilgrims at the shrine.

"We traveled 700 kilometers by bus, and many became carsick and felt tired due to the hot weather," Hien said. "But we are happy to come here to honor Mary and share our joys with other people."

Joachim Pham has been a National Catholic Reporter correspondent since December 2013 and regularly contributes to Global Sisters Report. He is based in Vietnam.

Q & A with Sr. Kateri Mitchell, part of the miracle attributed to St. Kateri Tekakwitha