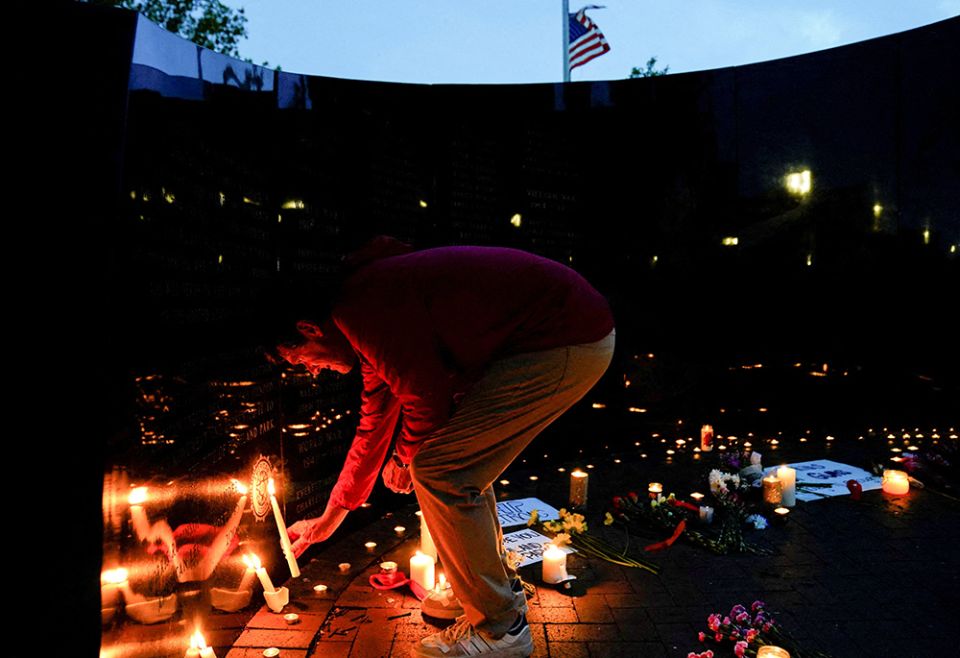 A person in the Chicago suburb of Highland Park, Illinois, lights a candle at a memorial site July 5 near the parade route the day after a mass shooting at a Fourth of July parade. Seven people were killed and dozens injured. (CNS/Reuters/Cheney Orr)

The Sisters of Mercy have denounced the fatal June 27 police shooting of Jayland Walker, a 25-year-old Black man, in Akron, Ohio, as well as a mass shooting during a Fourth of July parade in Highland Park, Illinois.

In a July 6 statement, congregational leaders said the Mercy Sisters were offering "prayers for the family and all who loved Jayland Walker, and for those whose lives were taken or whose bodies were injured, for their family and friends and the whole community of Highland Park."

Both incidents, the sisters said, "represent patterns of behavior and action that cannot continue to be commonplace, and none of us can become numb to their pain and the violence."

"As people of faith, we pray, not just prayers of grief and lament but prayers of strength and clarity to see real change." 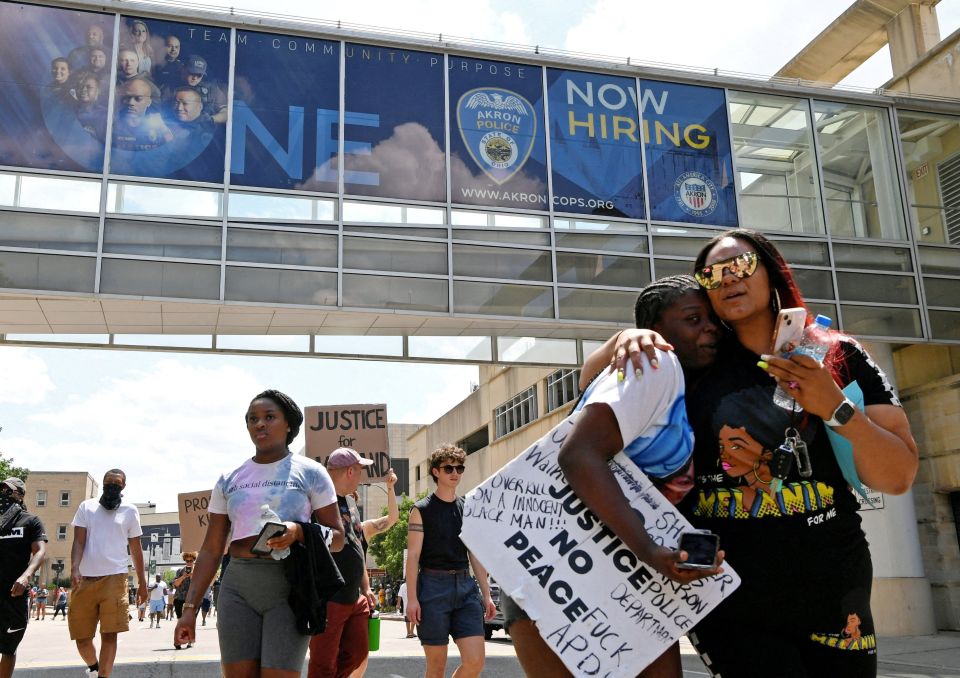 In the case of Walker's death, the sisters said: "Excessive force by police against African American women and men that leads to their death is all too common." A video released by the Akron Police Department after Walker's death "captures the hunting pursuit of this young man by eight heavily armed police officers — a type of inhumanity toward humanity that escapes all rationale. This must have been utterly heartbreaking for his family to watch."

﻿The incident in Highland Park, in which seven people were killed, was "the scene of yet another mass shooting. Lives were lost and many others changed because of ready access to automatic weapons and the absence of sensible, responsible gun reform," the congregation said.

It added: "Our current federal legislation fails to protect society, and advocacy efforts to change this continue to fall on deaf ears. We must dispel the myth that 'these kinds of killings only happen in certain neighborhoods' — mass shootings happen everywhere in this country, and we all have a responsibility to work for change." 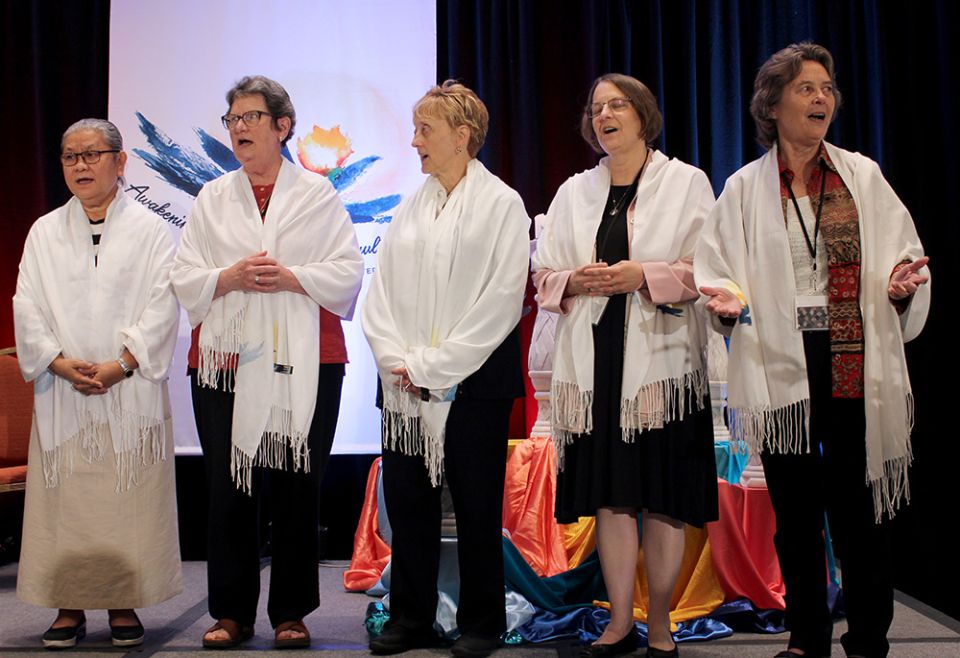 The Adrian Dominican Sisters have elected their next prioress and general council and set the congregation's direction for the next six years.

Delegates from the Michigan-based congregation, which met June 27-July 2 in Chicago for its 19th General Chapter, chose Sr. Elise García as their next prioress, succeeding Sr. Patricia Siemen. García and other congregational leaders will assume their new roles in October.

García served as communications director for the Adrian Dominican Sisters from 2011 to 2016 and has been a member of the presidential triumvirate of the Leadership Conference of Women Religious since 2019. Along with Dominican Sr. Carol Coston, García co-founded and co-directed Santuario Sisterfarm, an ecology center in Texas dedicated to cultivating both biodiversity and cultural diversity.

Related: Sr. Elise García is a bridge for sisters, younger and older, as she assumes LCWR presidency

The five "enactments" that delegates approved for the congregation's ministerial direction for the next six years include commitments to diversity, Dominican vowed life, spirituality, environmental sustainability, and gender equality.

On the environmental commitment, the congregation said it was "affirming the urgent need to live in right relationship with Earth community" and committing "to address the cry of Earth and the cry of those who are poor by joining the Laudato Si' Action Platform."

The platform, based on Pope Francis' 2015 environmental encyclical Laudato Si', is a seven-year plan in which Catholic groups such as religious communities, parishes, dioceses and schools commit "to working toward seven sustainability goals to heal Earth and work against global climate change," the congregation noted.

On the issue of gender equality, the congregational delegates said that in "valuing human dignity, and aware of the injustice of patriarchy which maintains the subordinate status of women and girls throughout the world, we strive to attain gender equality and women's full and equal participation and decision making in church and society."

A new book, Like a Mustard Seed: A History of the First Benedictine Women's Monastery in North America, is written by a Benedictine sister and scholar.

The book by Sr. Ephrem Hollermann, a former professor of theology at the College of St. Benedict/St. John's University in Minnesota focuses on St. Joseph's Monastery in St. Marys, Pennsylvania.

In an announcement of the publication, St. Benedict's Monastery in St. Joseph, Minnesota, noted that the book traces the history of the "Benedictine community from which Saint Benedict's Monastery in St. Joseph, Minn., was founded in 1857 — just five years after three nuns from Eichstätt, Bavaria, crossed a perilous ocean to begin Benedictine life among women in St. Marys."

"It was my great privilege to be commissioned to write this history by the Federation of St. Scholastica," Hollermann said in the statement. "It was a blessed opportunity for me to further my conviction that the full story of American Catholicism will not be known until the stories of women religious have been lifted out of the shadows of mainstream history into their rightful place as stalwart shapers of an American Catholic identity and ethos."

Like a Mustard Seed is available for purchase in Whitby Gift Shop at St. Benedict's Monastery's Art and Heritage Place or online.

The Federation of St. Scholastica, which comprises 17 monasteries of Benedictine women, celebrated its centenary earlier this year.

In appreciation: Sr. Kate Kuenstler, canon lawyer for the people of God

Wisconsin religious order doubles down on commitment to renewable energy