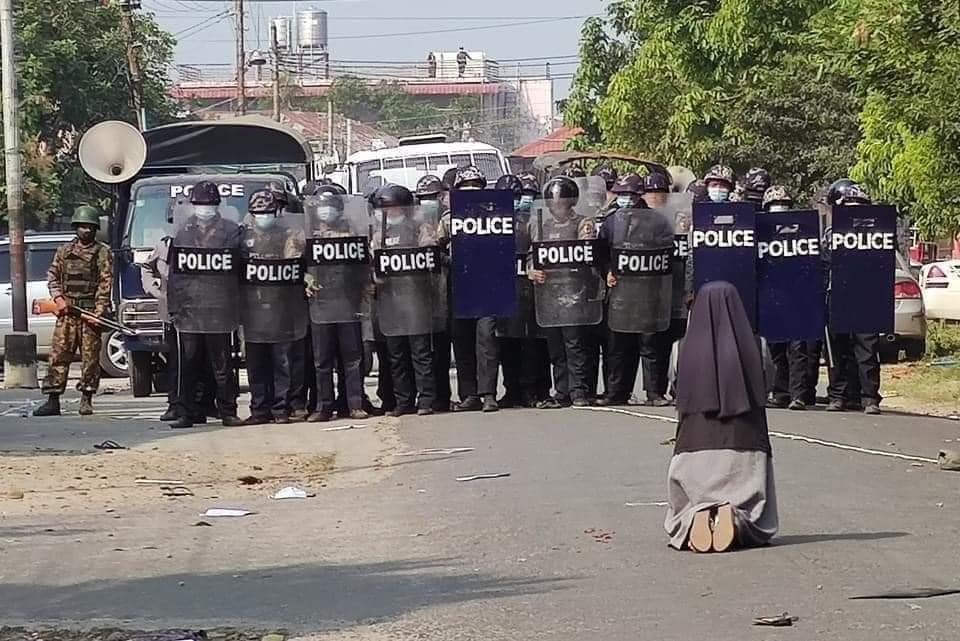 Sr. Ann Nu Thawng, a member of the Sisters of St. Francis Xavier, kneels in front of police and soldiers during an anti-coup protest Feb. 28 in Myitkyina, Myanmar. (CNS/Courtesy of the Myitkyina News Journal)

Sister Ann Rose Nu Tawng, the religious sister who became a worldwide iconic figure earlier this year as she knelt on a dusty road in supplication between the Myanmar military and anti-coup demonstrators, has launched a new book in Italian.

The young sister presented the volume -- Uccidete me, ma non la gente (Kill me, but not my people) -- to journalists in Rome on May 13 via video from her convent in Myitkyina in northern Myanmar.

Appearing on the right side of the screen in her white habit and black veil, she did not seem overly impressed by the interest she has generated.

She apologized for not speaking English well, before saying in her native Burmese, "My name is Sister Rose and I am a nurse. "

Most people had never heard her voice before, but the photo of this little religious sister kneeling in front of soldiers in a country shaken by historic protests continues to circulate around the world.

In front of her computer's webcam, the 44-year-old member of the Sisters of St. Francis Xavier then told the story of what happened.

It was February 28, a month after the military coup of February 1, when she heard gunfire coming from the street next to her clinic.

"I was working, when I heard something going up. So I went outside to see what was going on. I hadn't imagined anything, planned anything," she said.

But seeing soldiers about to charge a crowd of young people, Sister Rose decided to intervene.

And she knelt down in front of the men in arms.

"I knew I was taking a risk"

"I only wanted to protect the people, so that the young people could escape," she said calmly, interrupted only by the Burmese priest in Rome who translated her words into Italian.

"The next night, I thought about it and was amazed that I was still alive," she recalled.

The same scene was repeated a few days later on March 8.

This time, two soldiers knelt in front of her, assuring her that they did not wish to be violent and were only obeying the orders of their superiors.

"Kneeling is a gesture of forgiveness, of reconciliation," Sister Rose said.

"When I did that, I felt deeply moved by the Holy Spirit. I think God used me to save his people."

"The police regularly come to check my papers"

Since then, more than 700 people have been killed and thousands more injured.

Sister Rose continues to work at the hospital adjacent to her convent, but no longer goes outside. The authorities appear to be on to her.

"I think there are still great risks for me, for my life. The police regularly come to check my papers, take photos, ask me questions," she said.

Pope Francis, who visited Myanmar in 2017, will be celebrating Mass on May 16 in St. Peter's Basilica for the Burmese community in Rome.

Sister Rose was asked what the pope could do for the people in her country.

"I would like to thank the pope," she said.

"If I had the opportunity to meet him, I would ask him to bring our country to the attention of the international community," she continued.

"Pope Francis is a world figure and his words are worth their weight in gold. If he speaks, all nations will be watching. In the last three months, we have had so many deaths..." she said, her voicing trailing off.

In recent weeks, the pope has increased his appeals for the people there.

During the Angelus one Sunday in February he assured them he was "following with deep concern the developments of the situation that has come about in Myanmar".

He prayed "that those who have [positions of] responsibility in the country will place themselves with sincere willingness at the service of the common good, promoting social justice and national stability, for a harmonious, democratic coexistence".

He has added his voice to the appeals of Cardinal Charles Bo, the archbishop of Rangoon.

Myanmar has become one of the central concerns for papal diplomacy.

According to people contacted by La Croix, Francis regularly discusses the situation in the country with the heads of state he receives.

He expected to do so later this month, perhaps May 20, when he meets European Commission President Urusula van Der Leyen.

News | The courageous witness of Sister Rose in Myanmar

The path of holy disobedience

Resolved to make no more resolutions

How can I recognize the word of God in my daily life?