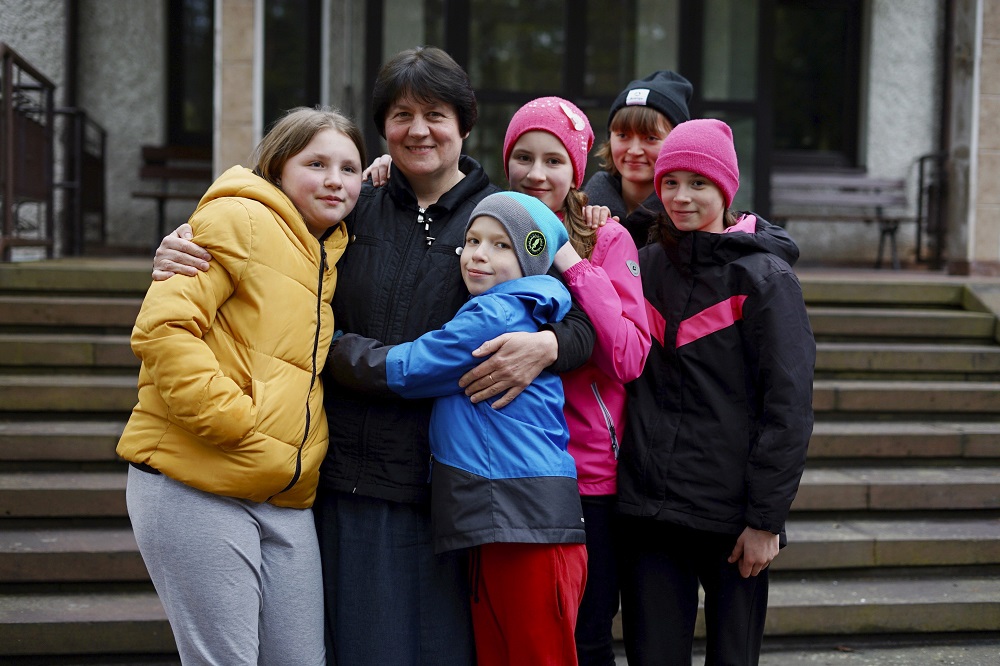 Sr. Antonina Sinicka, a member of the Congregation of Sisters of the Angels, poses with five of the children from a group home in Zhytomyr, Ukraine, at the congregation's motherhouse in Konstancin-Jeziorna, Poland, on April 20. (CNS/Adrian Kowalewski)

David, 11, wouldn't mind staying in Poland a while longer, maybe traveling around to see more of the country.

But the three other boys and, especially, the four girls in his family disagree strongly.

The eight children, who range in age from 10 to 15, are orphans who were living in a group home in Zhytomyr, Ukraine, sponsored by Caritas-Spes, the charitable arm of the Latin-rite Catholic dioceses in Ukraine.

While there are two sets of siblings among the eight, they insisted they all are brothers and sisters, and their caregivers vouch for the fact that they tease each other relentlessly and defend each other fervently.

On Feb. 26, two days after Russia invaded Ukraine, Srs. Antonina Sinicka and Irena Wlasowa, members of the Congregation of Sisters of the Angels who staff the Zhytomyr home, decided it was time to take the kids and leave.

"It was a difficult decision to leave everything behind," Sinicka said April 20 during an interview at the Sisters of the Angels motherhouse in Konstancin-Jeziorna. "But the children were not eating, or they vomited if they did; they weren't sleeping; and if they saw an airplane, they ran into the house to hide."

The superior general of the order had told them just before the war began that they would be welcome at the motherhouse, a stately building on a large piece of property with a forest of spruce trees and a patio lined with plum trees in full bloom in late April.

Forty sisters, mostly elderly and in need of assistance, are the permanent occupants of the motherhouse, but now, they have been joined by the eight children and two sisters from Zhytomyr and another six mothers with their children from Ukraine — a total of 30 guests as of April 20.

The younger children get a thrill from pushing tricycles up the wheelchair ramp and whooshing down again. Balls of various shapes and sizes are found throughout the yard. And propped by the front door are badminton rackets and a skateboard.

The motherhouse is just one of more than 1,000 women's convents in Poland hosting Ukrainian refugees. In many cases, orders like the Sisters of the Angels who had members running institutions in Ukraine for children — orphanages, boarding schools for the blind or for children with disabilities — simply had them bring the children to Poland.

Sr. Ewa Makolepsza, who oversees the hosting program at Konstancin-Jeziorna, said at first, it was an adjustment for everyone, especially the children, who "were very reserved."

"They can stay as long as they need; they can go back only when it is stable," she said. "These children brought us life and joy. It's a challenge, but it led us to be more open, to leave our comfort zone."

"I don't know what we will do when they go," she said.

Most of the children really want to go and, Wlasowa said, the girls keep packing and unpacking their bags "so they will be ready to leave."

Three weeks after the war began, their school in Zhytomyr, like most schools in Ukraine, returned to online classes, which helped bring some normalcy to their lives as well as a regular rhythm.

The youngsters said most of their classmates also have left Zhytomyr and, when asked where they were, called out: Estonia, Hungary, Spain, Poland, Lithuania and Italy.

Asked if she had a message for other 15-year-olds, Katya, the eldest of the group, said, "The most important thing is your home and supporting one another."

But Dominika, 13, said she also misses friends from school "and our pets," because the dogs and cats had to stay behind.