Q & A with artist Anne Goetze, documenting Visitation monasteries in the US 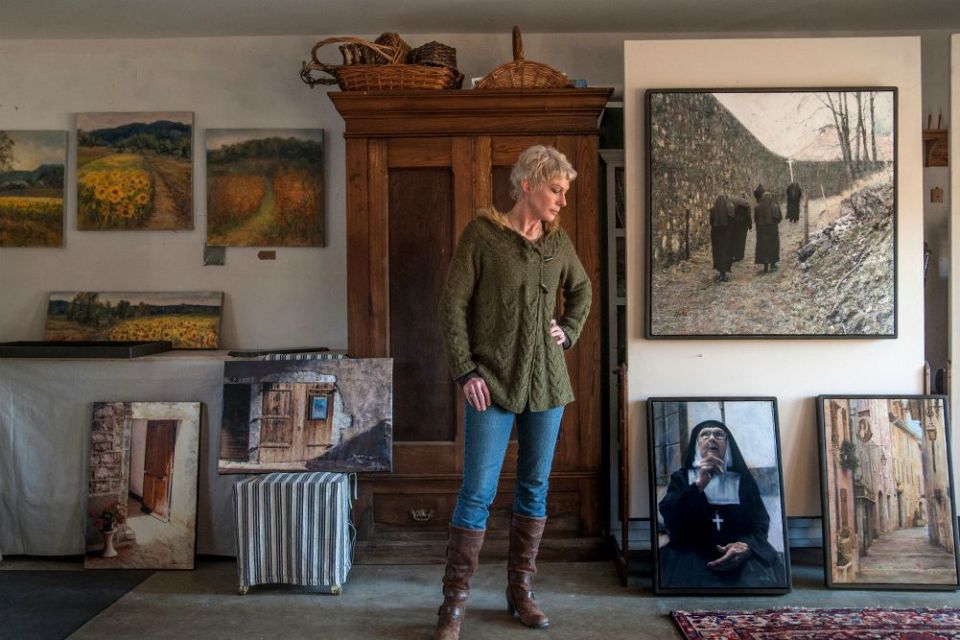 Tennessee-based visual artist Anne Goetze spent 20 years documenting her American-born aunt Helen at the cloistered Visitation monastery in Annecy, France, where the Visitation Order was founded 400 years ago. Her aunt, who took the name Sister Marguerite Marie, and the other sisters made a profound impression on Goetze, who has continued to make them the central subject of her work, specifically a multimedia-visual-art-project-turned-documentary-film called "Pray To Love." Many of the images from this project can be viewed on Goetze's website.

Over the last few years, Goetze has taken her hybrid photographs/paintings of the Visitation sisters on the road, visiting all remaining 11 Visitation monasteries in the United States and holding exhibitions of her work so the sisters can see it.

"They certainly won't be coming out, so I decided to take the show to them," she said with a chuckle.

As Goetze travels, she films the sisters and interviews them about their spirituality and their reactions to the artwork. She has produced a short film about the sisters, which was recently screened at the 2019 Franklin International Indie Film Festival, and is currently working on a feature-length film.

Goetze, whose personal spirituality includes a Catholic upbringing as well as marriage to a Southern Baptist and years spent as a wedding photographer, spoke over the phone with Global Sisters Report about her project, her impressions of the Visitation Order, and the spirituality of her artmaking.

GSR: Your aunt and her sisters from the Visitation Order have been the subject of your art for multiple decades. You first visited your aunt in France when you were a young girl. What do you remember of those early visits with her, and what about her compelled you to make her the subject of so much of your art?

Goetze: I was basically just very curious of how she could be happy living behind walls. And it turned into documenting the cloister nuns, period.

As a little girl seeing those visuals — they had the grille back then, the grate. I remember thinking, "Oh, she's behind these bars. And we can't hug her," and all of that. I saw her one time when she was allowed permission to come back to the States for her mother's funeral. I hadn't seen her in 15 years, or something. I remember she hadn't smelled bacon cooking in however many years. Those things were forming in my mind like, "Oh, my goodness."

But she was always still joyful and warm, and her letters had been great over the years. I got these letters from her that were pretty powerful. Over time, with those little snippets of wisdom, she unbeknownst to her became a bit of a mentor. She was always very wise and gifted in her writing. 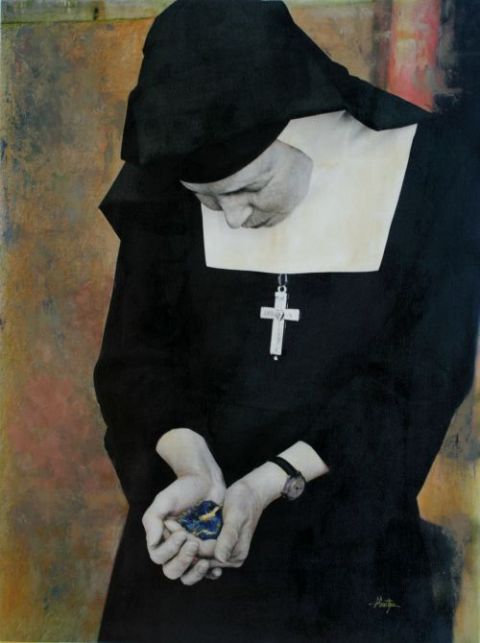 Visual artist Anne Goetze says this image "helps with anxiety because I'm thinking, 'Well, if God takes care of the little sparrow in the field, how much more will he care for us?' We're not to be anxious. We're in the palm of God's hands." (Provided photo)

What did you discover about how your aunt and her sisters remained joyful "behind bars"?

Their motto is to be a gentle presence in a violent world. I think that's very relevant for today.

Because they have a vow of poverty, they don't own anything materialistic, but they have everything. I just think we have so much to learn from the simplicity of those women. Less is more. All the way around. Not just materialistically, but less me — you know, that mentality. They're meek, yet they're very strong. They have perseverance. I think that's huge. Huge. It helps us get through those hard times.

To me, they're kind of even part of the #MeToo movement because those women are the ones in the background that are just quietly doing things. They're taking care of the sick and the poor, and they're in service to others, and they're in constant prayer for others. And they take care of themselves. I mean, they need to. It's not like they're supported by the church financially with those things. They're independent, yet they are under a lot of rules and things like this with the men. But you don't hear about that. They're just in their quiet way doing good in the world. Even if things aren't equally fair.

I just see these women fulfill very good lives while always keeping others in the front. Getting to know these nuns, they helped to heal me. 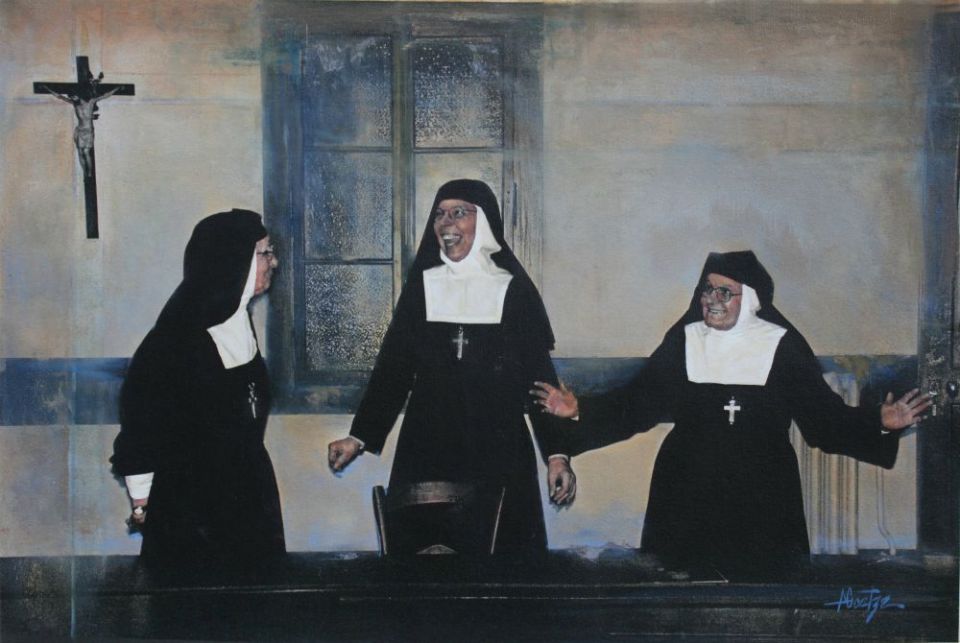 When visual artist Anne Goetze first visited her aunt in a cloistered setting, she wondered how she could be happy there. As she got to know the Visitation Order, she said she discovered the sisters' joy and went on to depict it in her hybrid photograph/painting artworks. (Provided photo)

I found healing slowly over time just with their love, with their prayers, with the energy from that. Getting to know them on a personal level and just sharing. My aunt once told me, "People think because we're up here on top of this mountain, we don't know anything about the world." But those things in life, in relationships? They're the same. There can be the jealousies, the unforgiveness, all of that. Your heart can be broken in different ways, but we all have brokenness in our heart.

In what ways was the experience of making art about the sisters spiritual for you?

As I was painting them, I experienced a very graceful, peaceful time. You could probably say, "Yeah, it's the Holy Spirit" because it was that peaceful, comforting feeling that was emitting from the subject matter I was working on. I just dove into that.

The work itself involved painting on top of black-and-white photographs. By joining those two mediums, I was joining realism and impressionism, so it's a mixture of both. Comparing that to spirituality, to: We're here in the world, but yet, we don't have to be of the world.

With the film, it's another art form and another form of spirituality. That is the real thing. It's not something that's created, like a painting. It's more — there it is, that's it. You're hearing the sisters talk with spirituality. It's reality. 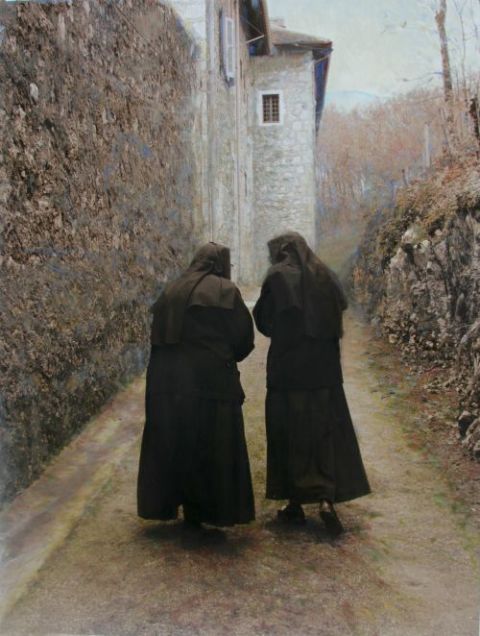 Visual artist Anne Goetze says the Visitation sisters taught her lessons about relationships from their experiences living in community with one another. (Provided photo)

Over time, the project has evolved from photographs to painting/photography multimedia pieces to a short film, and now, a feature film is in the works. Can you say more about the evolution of this project and what stage it's in currently?

Once the paintings were finished, I just had a feeling that I didn't want everything to be over. I wanted to carry it on beyond just having a gallery show and having the body of work dispersed and sold. I had a calling in the form of a dream about taking the paintings to the Visitation monasteries here in the U.S. so the sisters could see them. The idea was strong enough to not sit back on. It has given me purpose, and it has helped me share things through art about these women. I had the first exhibit up in New York in 2015, and that's when we really began filming.

The recent work on the film has been documenting the monasteries here in the U.S. It has the sisters talking about their spirituality and also what they see in the paintings. I'm hoping also that this film will gain awareness for these women. These orders are just struggling here in America. They can use our prayers.

I'm hoping to have the film finished by 2020 because that is the jubilee year with the Visitation Order, so keep it in your prayers. We're looking for the rest of the sponsors to get it finished. All God willing. As the sisters tell me.

Q&As | Q & A with artist Anne Goetze, documenting Visitation monasteries in the US