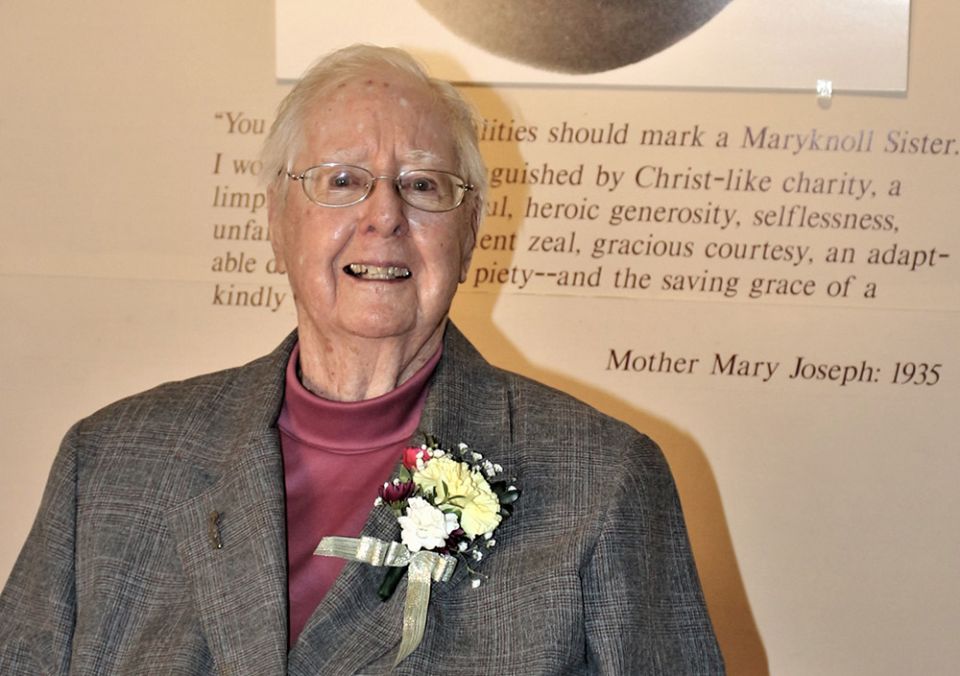 On April 28, Joan Delaney, a Maryknoll Sister from 1952 to 2022, died at the age of 92. She was a dear friend of mine, part of my grammar school days in Bridgeport, Connecticut; later, we commuted together to attend Albertus Magnus, a Dominican college in New Haven, Connecticut.

After graduation, Joan entered the Maryknoll Order. For the next 70 years, she spent her missionary days in a most unusual way.

To the surprise of her many friends (as well as her own surprise), Joan was not asked to pursue the usual missionary path after her profession at Maryknoll. True, for her first 20 years, she seemed to go that route. Assigned to Hong Kong, she was a secondary teacher and principal in the Maryknoll Convent School; later, after graduate studies in London, she taught at Hong Kong's university and a local seminary. 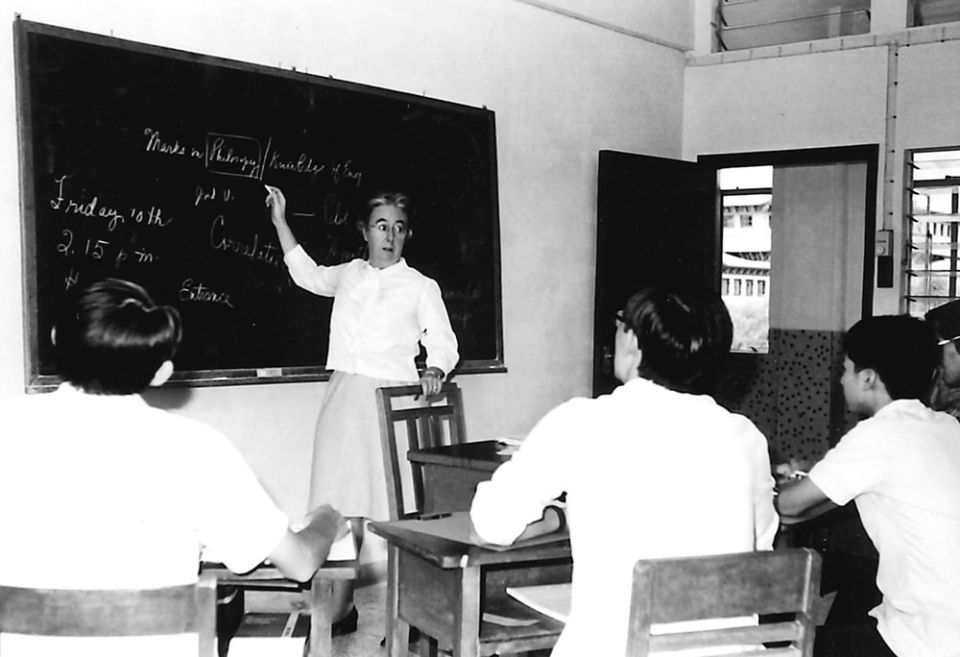 Like all missionaries, however, she had a special love for God's people. She soon "fell in love" with her students. From the overpouring of devotion toward her that we were aware of over the years, they responded in kind.

But then, her life changed as she was asked to become a part of the strong ecumenical and interfaith overtures that emerged in the years after the 1962-65 Second Vatican Council. Imagine, a Maryknoll missionary sister being sent to work in Rome — instead of returning to the missions — in order to become involved in diplomatic, ecumenical work for the Vatican in Geneva!

Imagine Joan, as the next several decades unfolded, finding herself sent worldwide to dialogue with spiritual leaders of all faiths and sects in order to discuss the contributions of the Gospel message of the Catholic Church and to listen to and record their responses. 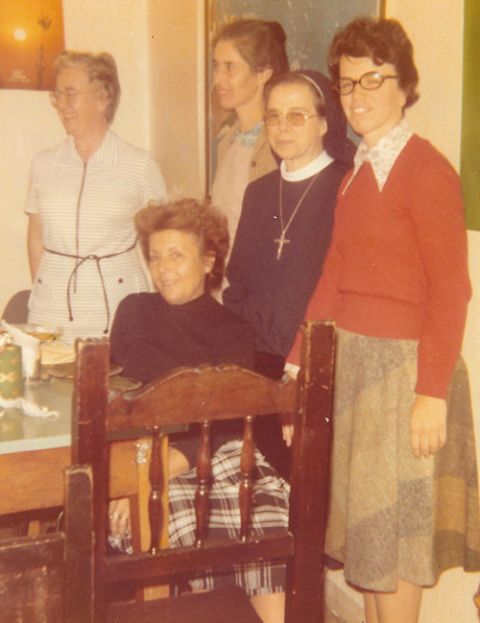 The SEDOS staff in Rome in 1978, including Maryknoll Sr. Joan Delaney at left (Courtesy of Maryknoll Sisters)

When I found myself working side by side with Joan in 1982 at the Center for Applied Research in the Apostolate (CARA) in Washington, D.C., I realized that Joan had, indeed, embarked upon a very different ministerial vocation. To my mind, it had made her a most unusual global sister: a woman religious tasked with the difficult challenge that, in those turn-of-the-millennium years, was still largely reserved to the phalanx of priests and bishops who served the universal church. Joan was to take on a ministry never before engaged in by women religious.

How did this special call begin? After leaving Hong Kong in 1976, Joan was assigned as a director of SEDOS, a mission documentation center in Rome that served 45 Catholic missionary communities. Her sociology undergraduate and graduate degrees, first in the U.S. and then in London, had prepared her for this.

Soon, she was also known in Vatican circles for her skills of quiet diplomacy. With these gifts acknowledged, she was asked to become a special Vatican delegate to the World Council of Churches' missionary endeavors.

By 1981, she was working in India in order to set up a mission documentation department. After that short assignment in Washington — where she and I worked at CARA — Joan returned, for six years, to official duties in the World Council of Churches' Commission on World Mission and Evangelism.

Thus, from Asia to Europe, this amazing nun had brought her vowed commitment, her statistical knowledge, and her counsel to both Catholic and non-Catholic groups throughout the world. Most especially, she navigated the complicated world of post-Vatican-II affairs, interacting with church and community leaders of many cultures and differing ideas.

Whatever the specific role she was asked to play, Joan brought her thoughtful, grace-filled counsel to all concerned.

Thus, my friend Joan, this down-to-earth, East Coast woman who had been brought up in America's working-class neighborhoods, had become a world traveler representing the church and mastering the varied intricacies of ecumenical interaction in big-city environments, managing a maze of transportation challenges that brought her into this world of church politics.

Maryknoll had proved to be the perfect vocation for the Dominican life of searching for the truth that she had received at both Albertus and the congregation she joined. She had been set free to be a special kind of ministerial missionary. 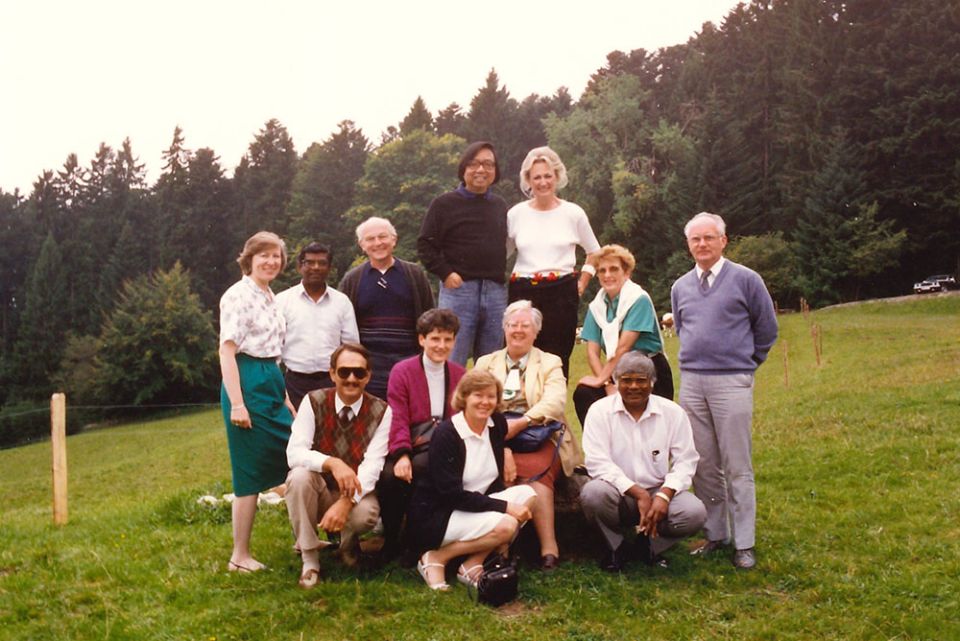 Her initial development as a wisdom figure in Hong Kong had become the inspiring prelude to a work that enabled her to be a key negotiator on behalf of the Vatican in worldwide venues. Over the decades, her work brought her to engagements with some of the most prestigious world church leaders in Moscow, Rome, Guatemala, Ecuador, Peru, Argentina, Albania and more.

Clearly, Vatican officials had learned to recognize her gifts — and used them. As one of her friends said: "Joan ... lived in the present while thinking about the future and how life together could be improved if people of vastly different views and sects could be linked."

She was a constant intercessor, intermediary and guide. Through all of this, she never forgot her friends. Christmas mailings with personalized notes attached proved the breadth of her love and desire to reconnect. 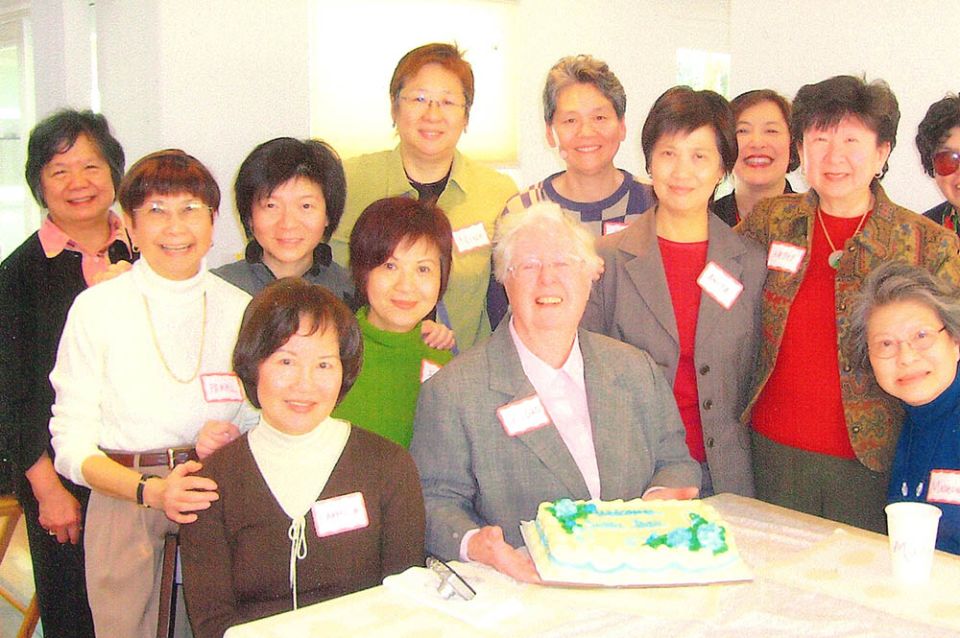 To the end, moreover, there was something so Marian — so Maryknoll — about Joan as well. She listened obediently to the Spirit and to God's people. In her quiet manner, she brought Jesus to every corner of the world as she represented him in his church.

Before the women's movement made its own demands of power, this unassuming woman had attracted the attention of the Vatican as well as other church leaders. This is the Joan I knew from the day she presented herself as a transfer student from Yonkers, New York, to the astute student called upon to be a central part of our Theology Club at Albertus, to the missionary studies she worked on beside me at CARA.

The way she handled all those assignments taught me so much about how to be the kind of "bridge" to the world of faith she populated and exemplified. Insufficiently noted even to this day, she will always be remembered, as I remember her, as a precursor of the modern woman of our church. In her death, I hope she will receive the accolades of a wider public as well as become a source of admiration as she was for us. Joan was truly a preeminent handmaid of the Lord. 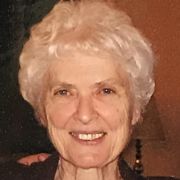 Dolores Liptak is a Sister of Mercy of the Americas. A published author and archivist, she has a doctorate in American history and has taught in several colleges and seminaries. She served as the organization of women religious archivists' first president and guided it for many years. Currently, she is a consultant and occasional essayist and author.

GSR readers share how the coronavirus has changed their communities, part one