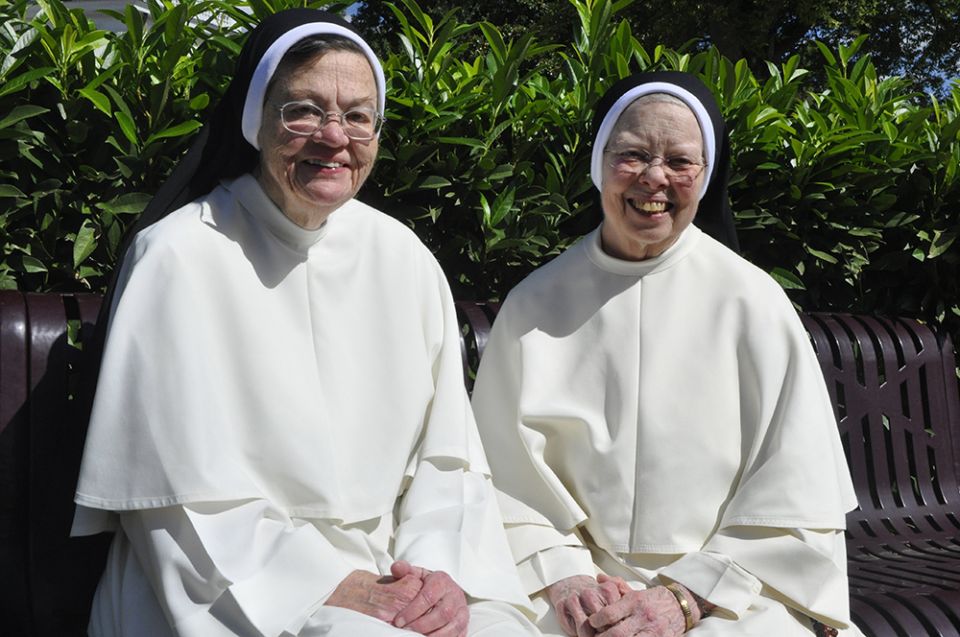 Sr. Elizabeth Anne Allen and Sr. Jean Marie Warner of the Congregation of Dominican Sisters of St. Cecilia in Nashville, Tennessee, share a joyful moment Sept. 12 as they celebrate their golden jubilee, which officially occurred July 8, and 50 years of friendship. (CNS/Tennessee Register/Katie Peterson)

And it was a friendship that Allen said was by the "grace of God."

"In this case, it was the family God chose for us," Allen said. "We've never taken each other's friendship for granted. We worked at it and have been grateful for it the whole time because God didn't have to do that."

It truly was divine providence that brought them together because besides that mutual call, their journeys to that call were on opposite ends of the spectrum.

Allen grew up Protestant in Murfreesboro, Tennessee, with her parents and three sisters. But when she was a junior in high school, President John F. Kennedy was assassinated, and the very next day, she stepped foot into a Catholic church for the first time.

Kennedy's assassination "was kind of the 9/11 of my generation," Allen said. "My friend and I were both Protestant, and we just went to [St. Rose of Lima Church in Murfreesboro] to pray because it was the only church that was open.

"When we were in there, there was not anything organized, but it was full of people praying, very quiet. There was something just very prayerful, and you could tell something very meaningful was happening," she said. "I had never experienced that same sense of [divine] presence before."

After that day, Allen said the feeling stuck with her, and she finally attended Mass for the first time in 1964, accompanying her friend to the Easter Vigil.

"If you're going to start," she told the Tennessee Register, newspaper of the Diocese of Nashville, "you might as well start with the big one."

That night began a four-year journey for her entry into the church. Meanwhile, while studying history in college, she recalled one teacher who had only negative things to say about the Catholic Church.

"He was looking at the church in the worst possible light," Allen said. "I found myself defending it and reacting to it.

"The girl sitting next to me happened to be Catholic, and I said, 'This thing that he's criticizing makes perfect sense to me' ... and I didn't like how he was treating it lightly," she said.

So, at the suggestion of her classmate, she went to speak with the pastor of St. Rose and started instruction the very next week, coming into the church in 1967 at age 20.

Following her college graduation, she took a teaching job at St. Rose School and in 1969 was introduced to the Dominican Sisters of St. Cecilia for the first time, as they came in as teachers.

"As soon as I met them at the end of August that year, I immediately thought, 'This is what I'm supposed to do,' " and, with that, she entered the convent in 1970.

Warner's journey to religious life was much different. She was a cradle Catholic and grew up around the religious life. When she was in grade school in Atlanta, she was around the Sisters of Mercy and also knew several Dominicans even before the family's move to the Tennessee town of Tullahoma when she was a high school sophomore.

"My grandmother was big buddies with one of the sisters, so I grew up coming to the motherhouse and knowing the sisters. I became really solid about my sophomore year in high school that this is what I wanted to do," she said. "There was no doubt I was going to be a Dominican. I didn't even consider any others."

And, along with Allen, she entered the convent in 1970 "right out of high school," she said. And from then on, having begun their discernment period together as well, just a few months prior, a 50-year journey began.

On the surface, there was no other reason outside of their shared call that they would've begun a friendship.

As they reflected on their recent golden jubilee celebration, they knew the call for which they've dedicated more than half their lives wasn't just possible because of their mutual support, but the support of the entire Dominican community, past and present.

"I wouldn't have been faithful for 50 years if it hadn't been for the prayer and help of the community," Warner said. "The really neat thing about the jubilee was that it was a celebration of community ... and that's what we wanted it to be."

Johnson to LCWR: Sisters ahead of hierarchy in living Vatican II renewal

Q & A with Sr. Mary John Mananzan, documenting Philippine church history from the viewpoint of the 'vanquished'

Videos from the apostolic visitation report