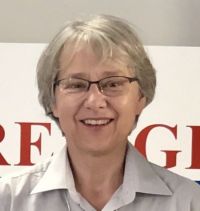 Sr. Jolanta Kafka is president of the International Union of Superiors General and general superior of the Claretian Missionary Sisters. She has worked primarily in the areas of religious formation and education, has been a member of her congregation's general council since 2000 and was elected for a five-year term as superior in 2017.

Coronavirus: One Year Later - Despite the unknowns, the loss of loved ones and the ongoing complexity of the situation, we have begun to see, with the eyes of faith, the possibilities of a new hope emerging.