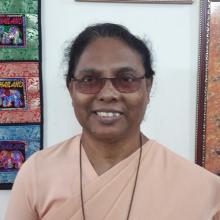 Probha Mary Karmokar is a Sister of Our Lady of the Missions in Bangladesh. Before final vows, she worked as a social worker in a rural village, lived with an international group of priests and religious of different congregations in a house of prayer, and directed an urban hostel. Later, she served in initial formation as provincial novice director and worked as a formator in Kenya. After studies in spiritual and pastoral theology, she served in Rome as a general counselor. Returning to Bangladesh, she was elected provincial superior for six years and is currently on the Bangladesh province leadership team.