•Grave concern for immigrants and refugees 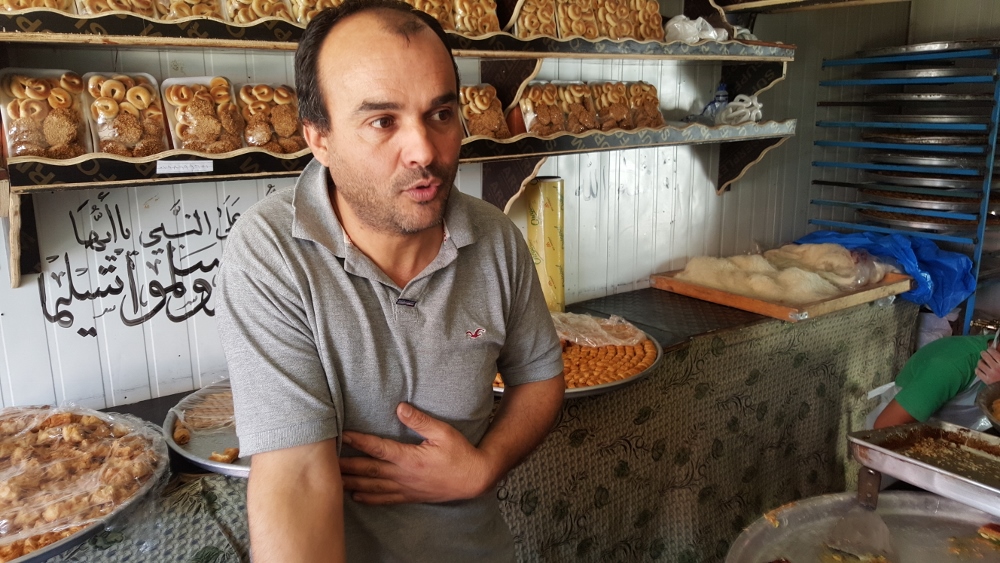 Ahmed Ammareen, 41, is from Daraa, Syria, where he was a farmer. Now he runs a sweet shop in Zaatari camp. (GSR photo / Chris Herlinger)

"Forced to depend for their survival on the people on whose doors they knock, refugees are in a way thrown outside the realm of 'humanity,' as far as it is meant to confer the rights they aren't afforded. And there are millions upon millions of such people inhabiting our shared planet." — Sociologist Zygmunt Bauman, author of Strangers at Our Door and quoted in The New York Times

There are millions of such people, and today, June 20, the annual United Nations' World Refugee Day, it is worth considering those who live at the Zaatari refugee camp, about an hour's drive from the capital of Amman, not far from the border Jordan shares with war-torn Syria.

I recently spent a day at Zaatari, which with 80,000 residents is now Jordan's fourth-largest city — part of the influx of 1 million Syrians who have settled in Jordan from Syria since civil war broke out in 2011. (The Syrians are not alone. There are about 200,000 Iraqi refugees in Jordan, and more than 2 million Palestinians in the country. Jordan has a total population of about 7 million people)

Most of the recent refugees who come to Jordan end up living in Amman and other urban areas. But Zaatari — with its wide streets, schools and growing numbers of businesses — is starting to feel more and more like a permanent city itself.

One of its residents is Ahmed Ammareen, 41, from Daraa, Syria. He was a farmer and still misses the pastoral life. But as the owner of a sweet shop in Zaatari camp — offering cookies, sweet cakes, baklava and other delicacies — he has found a niche and a purpose.

Ammareen likes life in the camp. "Already it's a city," he said. He had some initial experience outside Zaatari but concluded life was better inside the camp and returned. "At the beginning, I had a small tent, but bit by bit, I built a small kitchen."

And his business took off — proof that refugees are not helpless victims, but are working hard, creating new lives and contemplating new dreams. The camp's main street — jokingly called the Champs-Elysees after the landmark thoroughfare in Paris — shows spirited life: stores for shoes and cell phones, restaurants offering hearty falafel sandwiches. So, while boredom is and can be part of life in Zaatari, there are also pockets of bustle and hustle, of purpose and ambition.

That sense of permanence often arises in refugee situations — locales that seem temporary at first often evolve into permanent places: some Palestinian refugee camps, like in Jordan, or in the West Bank which I have also visited, are now 50 years or older.

Conditions in Zaatari are certainly better than in camps I once saw in Chad or South Sudan, which were sometimes shockingly haphazard and shabby. Those environs exemplified Zygmunt Bauman's argument that the uprooted are often, indeed, "thrown outside the realm of 'humanity."

Tensions are not unusual in refugee camps, and Zaatari has not been immune to them: There have been demonstrations about camp conditions and politics, anger at the Syrian government and its role in the civil war remains palpable.

There is also frustration about the overall situation in Jordan, where refugees are still seen as "guests" and not accorded legal status. Still, there are signs of hope. A recent Jordanian government decision allowing Syrian refugees to obtain work permits in certain sectors like agriculture is being praised as a first start toward humanizing the situation for them. Though it affects only 78,000 people now, it is expected to be expanded later.

"The move will potentially put Syrian refugees on the same footing as migrant workers in sectors such as agriculture, construction, service industries and food and beverages," the United Nations' refugee agency, said in April after the decision was announced.

In some ways that decision was not surprising. Jordan has had a tradition of welcoming neighbors from other countries — the strong presence of Palestinians is proof of that — and there is not the bad blood between Jordanians and Syrians that exists to some degree between Lebanese and Syrians. (Syria occupied Lebanon for decades.)

Still, there are tensions, said Nader Salman, a freelance journalist based in Jordan who is a frequent visitor to Zaatari. At just the time that refugees "are starting to feel they will be in Jordan, perhaps permanently," he said, Jordanians worry that Syrians working in the informal sector may be undercutting jobs and wages for Jordanians. It is the Middle East's parallel argument to that of Mexican workers' being in the United States.

While most Syrians decide they are better off trying to work in the capital of Amman and other urban locales, those who opt to stay in places like Zaatari experience their own worlds. Refugees who stay in the camps receive stipends and purchase food at stores run by the U.N. World Program. Meanwhile, humanitarian groups such as UNICEF are operating schools and other programs for children. Syrian artisans are painting wall murals to try to make the camps more livable.

As for refugees working in the camps, like Ammareen does in running his sweet shop, Jordanian authorities have come to accept it as part of the reality of the refugee life. Businesses in the camps provide the refugees work so they can earn "a little money that allows them to live a more decent life," Salman told GSR.

It also allows for dreams to take root, even flourish, and the camp is the site of many a dream, particularly for the young. Casandra Eshtiwi, 18, in her first month working at a wedding store on the camp's main street, notes that "wedding season is upon us," and that dozens of weddings were planned for the spring.

Some are the dreams of the ambitious, trying to best determine where to go — stay in Jordan, return to Syria or go to the West.

It may surprise people who live there to hear that the West is not necessarily the first destination of choice.

Part of that is due to international politics. During my day at Zaatari I heard an anecdote about a refugee family who heard they had been approved to go to the United States but chose not to. As the story went, the family was unhappy with the U.S. both for perceived anti-Muslim bias and also over lingering unhappiness and anger with U.S.-Syria policy. Many Syrians believe the United States has done little to help their country.

That was an unconfirmed anecdote. But days before, I had spent time with Iraqi refugee family living in the Al-Hashni neighborhood of Amman, and their hopes rested in part about the possibility of going to Australia.

Having left Mosul, Iraq, because of the intolerable situation of ISIS, aerial bombardments and other extreme tensions, Wilsin Salim Dawood Agla and Lina Behnam Majeed Hanusi recently arrived in Jordan.

The family, living in a simple, three-room apartment in Amman, and dependent on assistance from Caritas, are not in the most comfortable situations. Their home in Iraq was three times as big.

Yet they retain a sense of optimism — "You learn patience," said Hanusi. "Maybe here there are seeds of hope. In Iraq, there is no hope."

Through phone calls and email, they are in touch with other Iraqis who have settled in Australia. Sitting next to the mattress on the floor that serves as a sofa in the day and sleeping space at night, they said the word among Iraqis is that Australia is a welcoming place for refugees.

What of the U.S.? They have heard that it is harder to get established there, and that that there is more of an infrastructure of support in Australia.

Sr. Nesreen Dababneh accompanied me on the visit to the family. She is a clinical psychologist who works at a Caritas clinic in the Al-Hashmi neighborhood of Amman and knows from her experience about the numerous challenges refugees face in affirming choices about their future.

Feeling that they have no control any more over their lives is common — a feeling that "'others have decided for me where I can live because of political issues,'" she said. "This affects your equilibrium in daily life. The future is never clear."

In a particularly poignant moment for Dababneh, through her work she met an Iraqi professor who had written a text book Dababneh had read and studied during graduate school. "It's not easy for someone like a professor not to have a level of income, without a home, without a clear future," she said.

And yet, while some remain angry about the circumstances of their new lives — that they don't have work, that there seems to be no cosmic justice in the world — others find hope that they are simply alive and that the future offers some possibilities. "One case can differ so much from another," she said.

In the case of Ahmed Ammareen, the sweet shop proprietor, things are looking up.

Handing me a small piece of honey-coated baklava, he said, "It's better here than the outside, and it's close," referring to his home's proximity to a school in the camp. (I heard similar arguments among refugees in Darfur, Sudan. Even if conditions were not ideal, they welcomed educational opportunities for their children.)

Ammareen also likes the fact that due to the influence of the U.N. and others working there, an awareness of human rights, including for children, is part of camp life.

Education for his five children, ages 10 months to 14 years, is a guiding passion for Ammareen, and he speaks of particular pride of his 14-year-old daughter, Yanal, who wants to be an engineer and is studying English and math at a camp school.

Concern about his daughter's future in particular made him and his wife, Fardenal, decide that it was better to turn down the chance to emigrate to Germany and best to stay in Jordan.

Why? One reason: his sister-in-law lives in Canada, and so the family knows about the challenges of moving to the West. But the main factors Ammareen cited were culture and education. "I don't believe it's best to emigrate," he said. "I think it's better to wait here and return to our country. I think it's not easy for people my age to go other countries. To learn a new language and culture, it's not easy."

The adjustment would not just be difficult for Ammareen and his wife — it would also be hard on a teenage Muslim girl, and the couple were wary of placing their daughter into a Western lifestyle. "Our culture — it is not easy to mix with boys, to put a teenager girl in a new environment."

Religion also played a role: "The best things are here — to pray in a Muslim country; in the West we can't hear the [daily call to] prayer."

Ammareen believes things are freer in Jordan than in Syria. He is experiencing a kind of religious freedom in Jordan that he did not experience in Syria. He thinks Jordan's freedoms — a less restrictive atmosphere — could serve as a model for Syria. "I hope Syria becomes more like Jordan. In Jordan, policemen are gentlemen; in Syria, it's like a business."

Though Ammareen hopes he could be part of a vanguard that returns to Syria and rebuilds a war-torn country, he also wants to become a Jordanian citizen, saying Jordan and Syria are like cousins.

"There are a lot of opportunities in the camp and in Jordan," Ammareen said, finding something positive out of the trauma of leaving home and the comforts of a familiar world.

In short, he sounded like a man embracing and affirming his humanity.

[Chris Herlinger is GSR's international correspondent. His email address is cherlinger@ncronline.org. Reporting assistance for this story was provided by Nader Salman in Amman and Zaatari.]