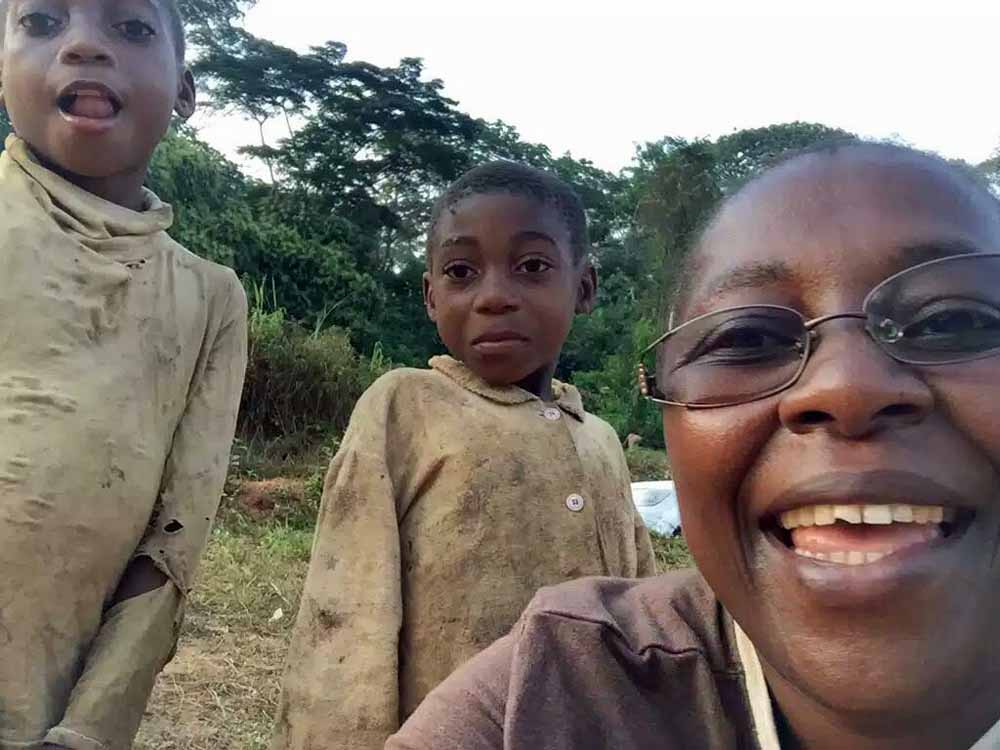 Why is it that nearly every country of the world that has native peoples finds it hard to accept them?

A recent visit to Cameroon brought my attention to the Pygmy tribes of Central and West Africa, where I found them neglected and looked down upon by other tribes and the government.

The word "pygmy" is a pejorative name for the tribes, even though each tribe has its own specific name. The name "pygmy" often conjures up visions people of very short stature. Why are they small? Poor nutrition? Genes? It seems the reason is yet unknown. 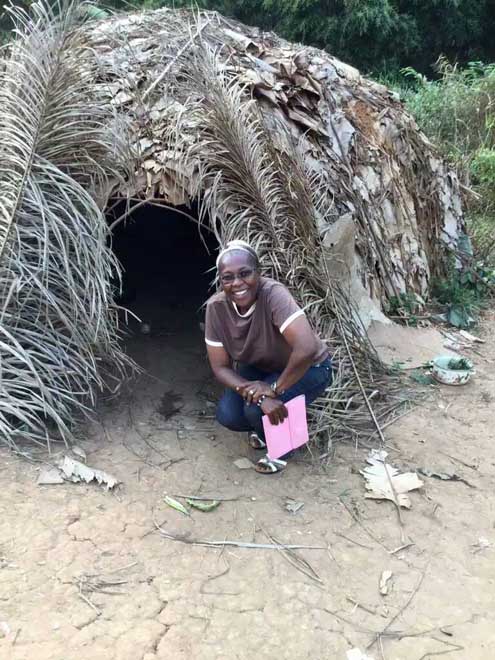 Pygmies tend to be migratory even though governments are trying to settle them. They live in dense forests and sustain themselves hunting animals and foraging for forest fruits and vegetables. They also barter these forest delicacies at open markets of other tribes. Their only water source is streams and rivers that they use for bathing, laundry, recreation and water for cooking. Forest animals share these same rivers and streams, so disease spreads easily from one to the other.

The Holy Union Sisters, founded in France in 1843, have been working in the Yokadouma Diocese of Cameroon for many years. They are also present in Benin and Tanzania. It was a great surprise in 2007 when some Pygmy leaders of the Baka tribe came to the sisters, asking for a school.

Sr. Constance Fonju, a member of the Holy Union regional leadership team, spends 10 days of every month working with these families and helping in the school. She calls it her most beloved ministry, even though she also enjoys her work as secretary for the Confederation of Major Superiors of Africa and Madagascar (also known as COMSAM) in its Yaoundé office in Cameroon. She was eager to tell me how this special school came to be.

GSR: Sister Constance, I am eager to hear the story of how your sisters began working with the Baka tribes of this area.

Fonju: I will start with our health center because that was our first mission. We started out with a health center for all the tribes of the area. Sometimes, some of the three Pygmy tribes would come to us for medical care, but because they migrate from place to place, they often waited too long. They usually rely on traditional doctors who use traditional potions and herbs to cure illness. When these fail, they come to the clinic or hospital. 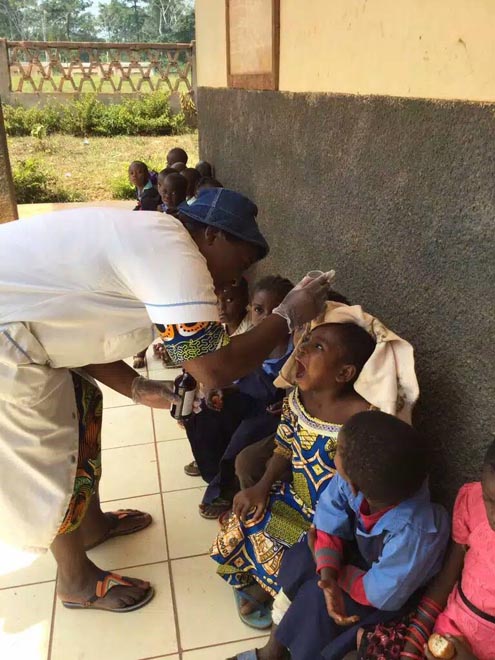 What are some common health problems that they come with?

Deworming is one of the most common for both adults and children. Children sometimes have worms coming out of their noses before parents bring them for help. They do not have toilets or sanitation practices, moving about in the forests, so diseases spread easily.

Malnutrition is another issue. One day, a mother came complaining that her child had died and many other families also lost children from January to March of the same year. They attributed these deaths to witchcraft: Some witch was putting spells on the children.

Our sisters knew the source of it all: The dry season had just passed, and there was no food in the forests. The children were dying from starvation and lack of nutrients. It takes a lot of talking with them to teach them that disease is not from witchcraft.

Alcoholism among men and women is very common. They make their own brews, and sometimes, they are too strong. Malnutrition of pregnant women is also very common, so they deliver low-weight children who often die early. Maternal death is very common.

Yes, the Pygmy leaders of one of the tribes came to the sisters and asked for a school. We had no money to build a school, so we started a school under a tree. Other groups saw this and asked to join. Eventually, three groups came together, and they built a simple structure. It now has six rooms and six grades. This past September, we added two more rooms for nursery school. The kids are from 2 years old to 20. Few adults have ever gone to school. 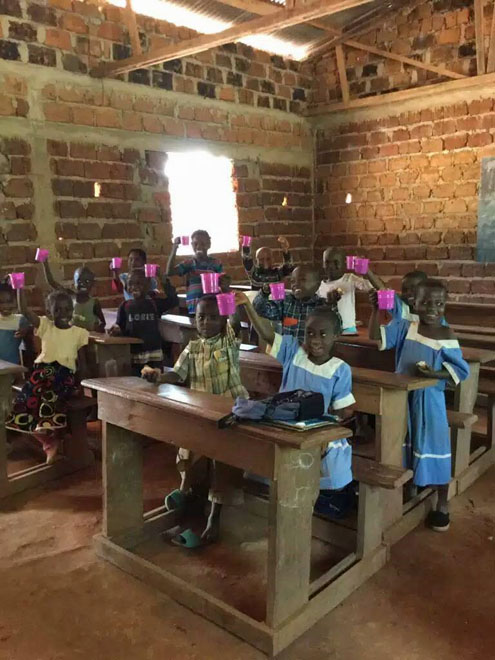 Has it been successful?

Yes and no. In 2016, 25 students graduated from the primary school. Luckily, their parents had left them behind in the village. Three of these were able to go onto secondary school. We are trying to get our school recognized by the government as a French school. It is not easy because the government sees them as low-class, only worthy as slaves. It is sad.

It is a struggle to get the kids to come regularly, so now we have a bus that goes out to collect them. The parents pay less than $50 per year for this service, but some are committed.

What are the greatest challenges you find working with these families? 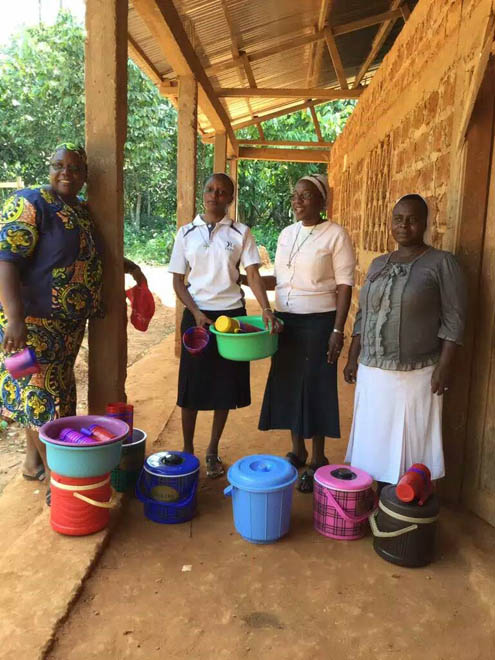 There are many. Migration is one, of course, and the community is small, only about 3,000 people. Interestingly, there are usually more women than men in each tribal group. I don't know why this is so.

Pygmy girls are often married at about age 12 and start having babies early. It is very hard to get them organized to settle in one place. They spend the little money they have easily. They might give it to a neighbor who has a television just to sit and watch programs. Sometimes, they might even exchange food for the entertainment if they have no money. They live hand-to-mouth. Most of the customs they practice are traditional, and they have not been educated so that change can happen.

Why do you love it, and how does this ministry impact your spirituality?

The people are wonderful. I love seeing the kids learn new things, and I see motivation in them to want something more for themselves. There were five sisters here for many years, but now there are only four, so I come out to help. My spirituality is enriched with gratitude, and it is a joy to give of myself to those who have so little.

Why I read literature