Skip to main content
This story appears in the Nuclear feature series. View the full series.

I was born in the year that the U.S. dropped the first nuclear bombs. Now the United Nations is reviewing the Nuclear Non-Proliferation Treaty. What does Christ call me to do in the face of all the suffering that has come in the nuclear age? In the history of civilization, wars have ended, then resources were again used for human need rather than human destruction. Since the bombing of Hiroshima and Nagasaki, the human family has been seduced by idols of weapons. The bombs were not the end of a war, but the beginning of the escalating cycle taking resources from human needs.

On Good Friday I was part of the annual interfaith prayer service at Lawrence Livermore Laboratories in Livermore, California, which engages in research, design and development of nuclear weapons. A number of congregations of sisters have been a part of the annual Good Friday prayer at Livermore, which has gone on for more than 30 years, including the Adrian Dominican Sisters, Oakland; the Dominican Sisters of Mission San Jose; the Dominican Sisters of San Rafael; and my community, the Incarnate Word Sisters International Justice, Peace, & Integrity of Creation Committee, San Antonio, Texas.

Because I am an Incarnate Word Sister, the incarnation holds special meaning for me. Jesus was incarnate, he became flesh. In my flesh, I feel the suffering of the Body of Christ.

“A nation that continues . . . to spend more money on [the] military . . .  than on programs of social uplift is approaching spiritual death.” Again and again we echoed these words of Dr. Martin Luther King’s “Beyond Vietnam.”

The Department of Energy NNSA 2016 Budget Request to Congress for Lawrence Livermore Lab is for $1,170,239,000 – and 85 percent of that is for Nuclear Weapons Activities.

This year the interfaith prayer service focused on “Beyond Nuclear Weapons / Beyond Empire / Beyond Racism.” Dr. King had said, “When machines and computers, profit motives and property rights are considered more important than people, the giant triplets of racism, materialism and militarism are incapable of being conquered.”

Though I had heard them before, I began to realize the truth of Dr. King’s words: “I knew that America would never invest the necessary funds or energies in rehabilitation of its poor so long as adventures like Vietnam continued to draw men, women, skills and money like some demonic destructive suction tube. So I was increasingly compelled to see the war as an enemy of the poor and to attack it as such.”

As we began walking towards the main gate of Livermore Labs, we paused at Stations marked by contemporary sculptures created by Ben Smith, an artist who is legally blind. He described them at our planning meeting, but I did not imagine that the bodily forms could be so troubling. I could feel the Body of Christ suffering.

A litany of the names, ages and locations of persons of color who have been killed by police and “security” forces was read, and all of us responded, “Presenté.”

We stopped at a Station for “Those killed without charge or trial,” another Station, “I can't breathe,” and  another  “Hands up, don't shoot.”

By a sculpture of “Lady Justice,” we heard names of those slain for seeking justice, including Dr. Martin Luther King, Jr., who was only 39 when killed in Memphis. “Presenté” we responded as we heard all too many names.

We wanted to give energy to those preparing to be arrested, so we danced the words and refrain of “Ella’s Song.” It grew stronger and stronger, “We who believe in freedom cannot rest until it comes.” The verses reminded us, “Until the killing of Black men, black mothers’ sons, is as important as the killing of white men, white mothers’ sons, we who believe in freedom cannot rest,” we adamantly sang and danced.

As we got closer to the gates, the guards there warned demonstrators that they were in violation of California law by blocking the entrance and trespassing. If the demonstrators would continue, they would be arrested. My friend, Franciscan Fr. Louis Vitale, co-founder of the Nevada Desert Experience and Pace e Bene, stood and said, “Thank you for giving us a clear warning. Nuclear weapons are against God’s law and are a crime against humanity. We are calling on Livermore Lab to stop and to desist from making all nuclear weapons. We are also giving a clear warning, you just heard it: Nuclear weapons can put an end to life on our planet. That’s pretty dangerous.”

Then Fr. Louis and 28 others were arrested for their civil disobedience.

I went home and was deeply troubled by what I had heard and seen, billions of dollars being invested in what could destroy all life, images of more and more people of color being recklessly killed.

The next day my friend, Carla De Sola, invited me to go with her to Easter Vigil services at the church that her deceased husband had attended. We stepped from the cold dark night into St. Gregory of Nyssa Episcopal Church and saw above us the Risen Christ leading friends of God in a dance of life as St. Gregory had described.

Can I learn to look at the Risen Christ, the leader of this dance and leap with him from death?

The Rev. Sylvia Miller-Mutia, like Mary Magdalen sent by Christ to tell his brothers, spoke beautifully of unexpected life. She broke the bread with care and tenderness like the Risen Christ sharing food and forgiveness by the Sea of Galilee. Every Friday, this very space where we were gathered around the holy table becomes a Food Pantry for any hungry who come to take what they need. Every Sunday all gather around the holy table that they may have eyes to recognize Him in the breaking of the bread and in the face of the hungry.

As the family of nations at the U.N. reviews the Nuclear Nonproliferation Treaty, I, who was born in the year of the first nuclear bombs, have danced lamentations where nuclear weapons are made. Yet, I have also been in the Easter dance of life with the communion of saints. Neither death, nor principalities, nor powers, can stop those of us who seek justice and peace. Yes, there is grace and hope enough to dance life, to continue in the struggle. 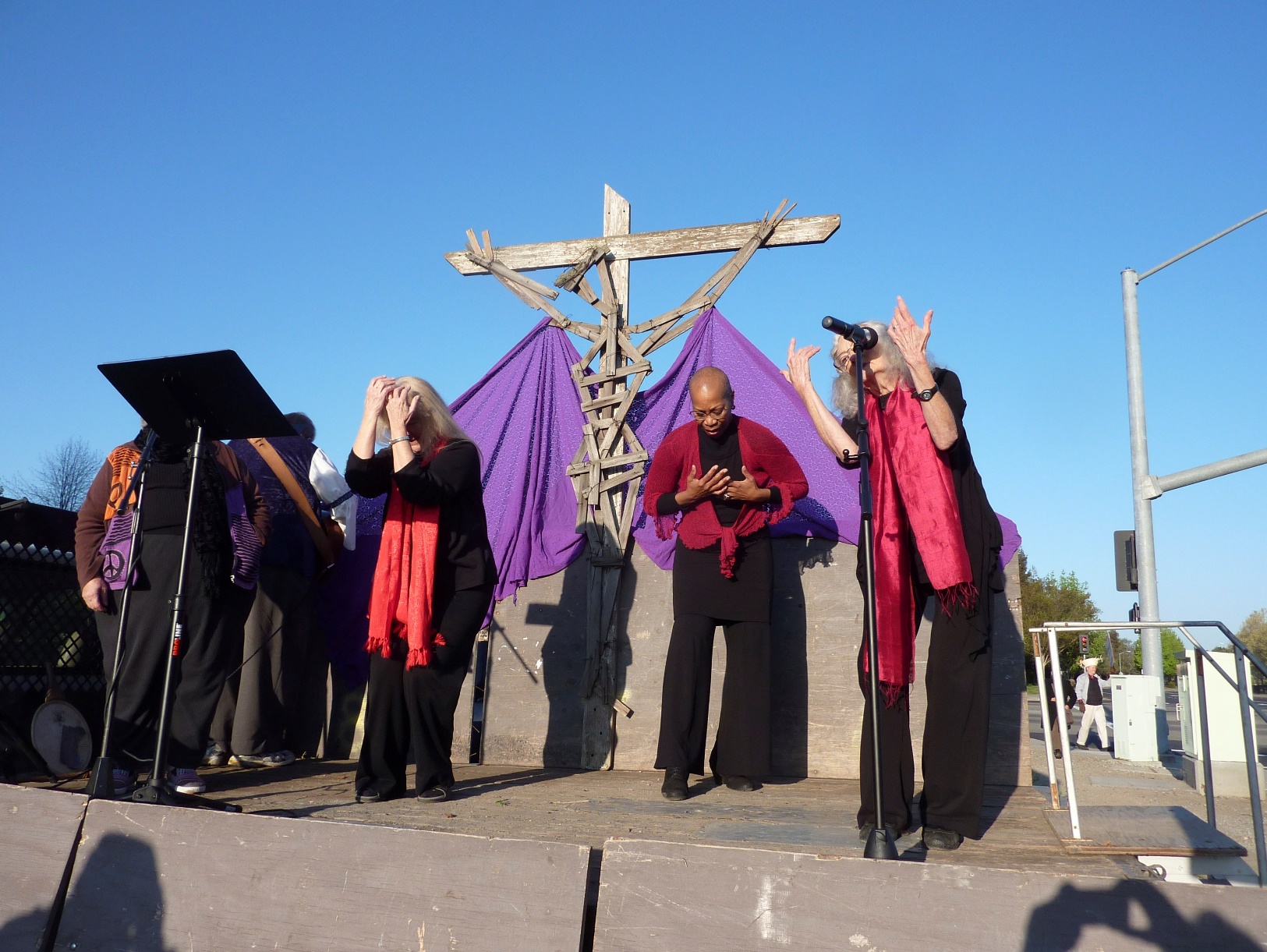 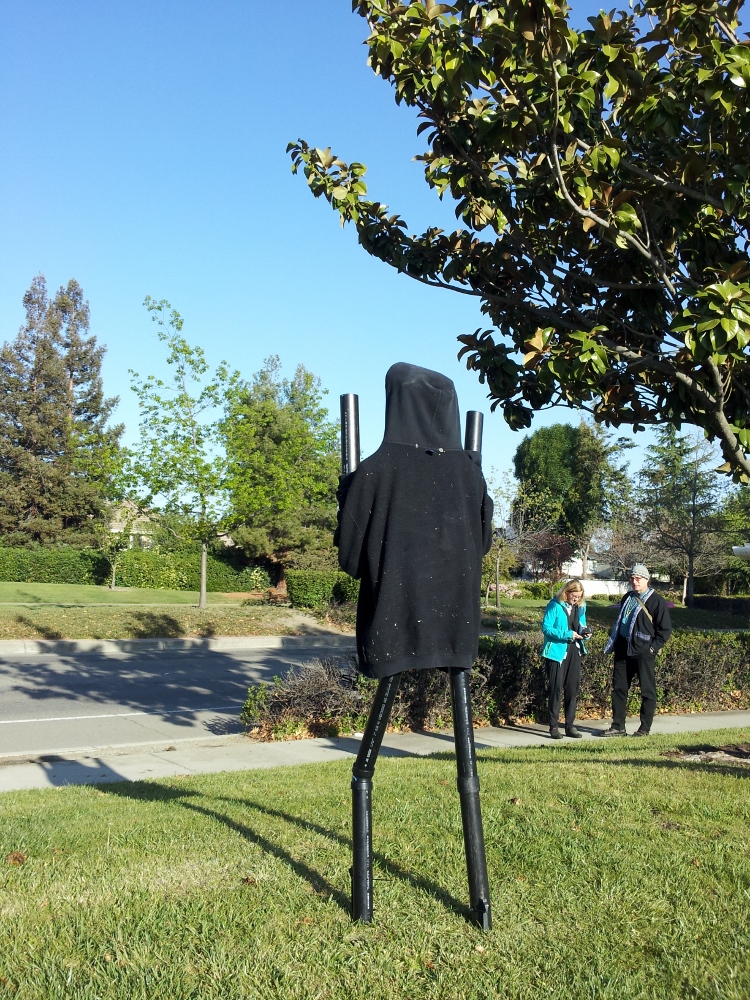 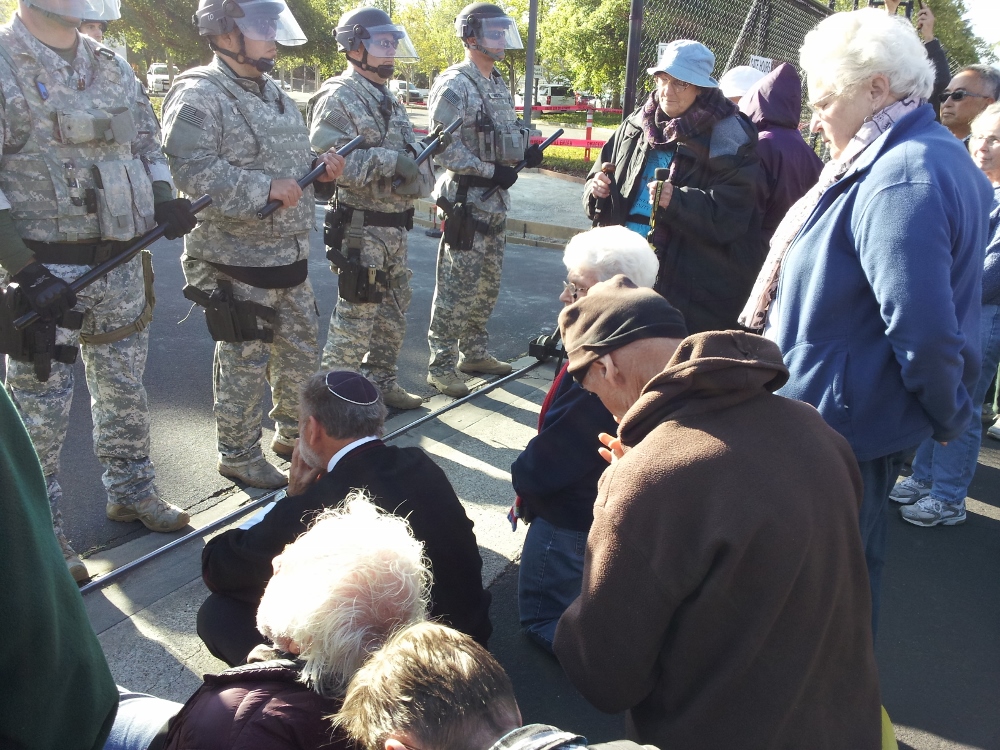 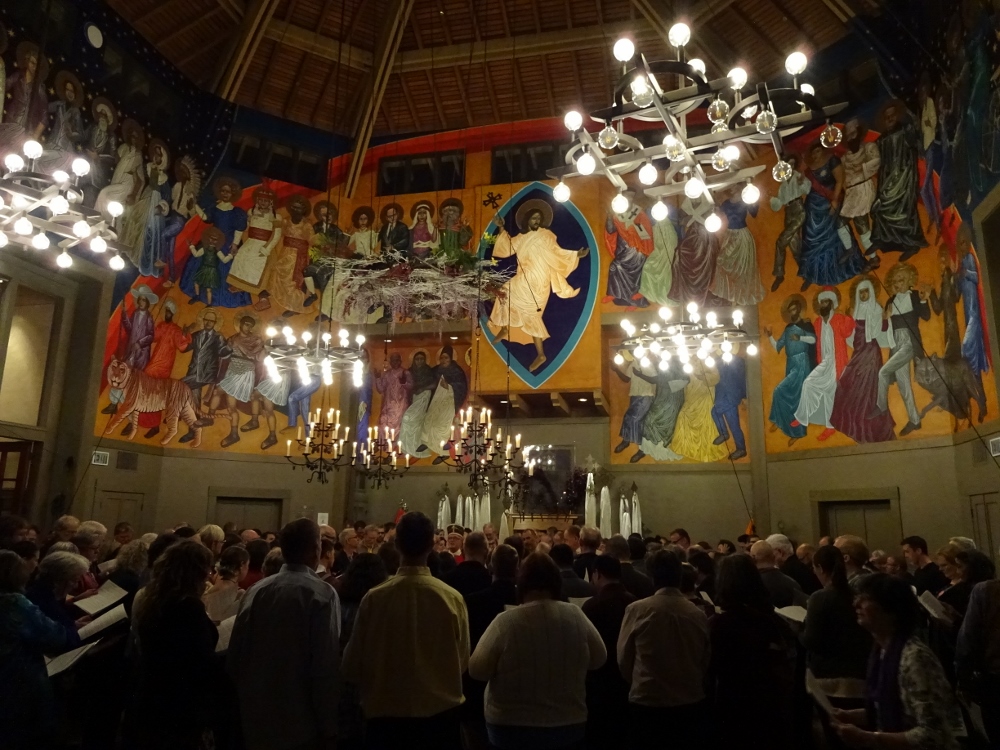