I was born and raised in a Catholic family, and am still proud to be a Catholic. Among all the things I have learned, two words really stand out for me: "unconditional love." Words easy to say, but very difficult to put into practice — especially during "stormy weather"! As a religious, I must not only teach the words verbally but must teach them by my actions.

As I get older, I am just realizing that I experienced unconditional love from my birth: from God, from my parents and even from strangers.

In 2004, I was invited to visit the U.S. by an American lady who paid my roundtrip airfare from Canada. Arriving in Wisconsin, I learned that she had already made some appointments for health care tests. The doctor discovered that I was about to go blind, and arranged for me to have surgery. The doctors did everything free, but the hospital charged about $7,000. Later, an unknown person paid the hospital. Unconditional love!

Today, there is no peace in the world: Pope Francis said there is "war in bits and pieces." As a religious and Christian, my core mission is to work for peace, but where should this peace start?

If we could only remember that we are made in the likeness of God and saved by Jesus Christ — who saw God's image even in the very human beings who had failed his Father. Then we would be able to see God's image in our brothers and sisters regardless of color or state, and understand our obligation to love them without condition — like what happened to me in Wisconsin.

Years later, I was able to attend the 49th Eucharistic Congress in Canada — my airfare paid by youths I did not even know. How can I cease to proclaim God's loving kindness toward me?

While reflecting on the words "unconditional love," I remembered a sister in my community with whom I was finding it difficult to talk. She had hurt me and I found it hard to forgive her, unless she would come and ask for forgiveness.

But as I reflected on the many good things that have happened to me for no reason, I realized that it is wrong for me to say the Our Father and approach the holy Eucharist unless I am willing to forgive. Deciding then to forgive and talk to her, I have since felt internal joy and freedom.

There is "war in bits and pieces" because we do not look upon one another as brother or sister but look on them as "somebody or someone." We see the other person as our brother or sister only if we are born of the same mother and father.

But if we could only remember who we are — made in the likeness of God! And we are called to represent God wherever we may be: in our family, in class and even in the streets.

When I was in Haiti, our gardener reported that a mentally challenged woman had given birth three days before, and the baby had not been washed or fed. I decided to take the child.

Being a sister and a missionary, I was worried about the child's future. Luckily, a man from Dawson Creek, Canada, who had come to check their project in Haiti, saw the baby sleeping on the table. Hearing what happened, he decided to adopt the child. There was nothing more that could better prove God's love to me.

If we could understand that we are made in the image of God, we would not have to make money by building weapons. We would not plot against other people's lives. The good that we would like to be done to us, we would freely do for our brothers and sisters.

Yes, there is "war in bits and pieces": no freedom to walk in some places, no freedom of speech in some areas. Why? We are not able to see the image of God in the person in front of us; our eyes do not have loving hearts, so we can't see the goodness in the fellow in front. Greed for money, greed for power makes one blind.

We are all born innocent, loving and loveable, so when and where do children learn to decide who is the enemy? When they start being ill-treated or seeing adults fight. A terrible civil war: Who started it, and why? It grew in bits and pieces: Did anybody win?

When did I forget that I am an image of God, called to love and serve as God has loved me? It was the day that my world echoed with "me, myself and I." And what does one benefit from that? Nothing — for without God, we are nothing.

Bad things happen when we do not remember that we are God's image, and our wars in bits and pieces against God's image are actually against ourselves.

When we lose track of the road we were born to walk, where does our way lead then? As long as we are alive, it is never late to ask forgiveness for having lost the road, and ask for help finding the way.

There are times we cannot avoid fighting. Once when something very unjust was done to the poor, I tried to stop it, and paid the price. Life was very difficult for me in the community for some years, and I kept praying to bear the pain and not hate. I will not hurt others if I love them as I love myself. With God's grace that time is now over. Unconditional love!

In 1994, when soldiers were fighting among themselves in our country, some were threatening each other on our property. We couldn't move freely, we couldn't sleep, we were hungry, and some of our buildings were damaged. The memory is fresh in my mind. My nephew, who was 3 years old at time, was affected mentally.

Later, in 1998, at a time of political unrest, South African soldiers attacked our army. I can't control my tears when I think about the people who lost family members and property. I hate this.

There is nothing more Jesus could have done to prove his love toward us. And there is nothing to proclaim if we are not proclaiming his love for us, and thanking him at all times. Hurray! We don't have time for fighting with each other!

[Monica Moeketsi is a member of the Servants of the Immaculate Heart of Mary, the Good Shepherd Sisters of Quebec. She belongs to the Mosotho ethnic group, and lives in her home country of Lesotho, where she is currently working as secretary for the Lesotho Major Superiors.] 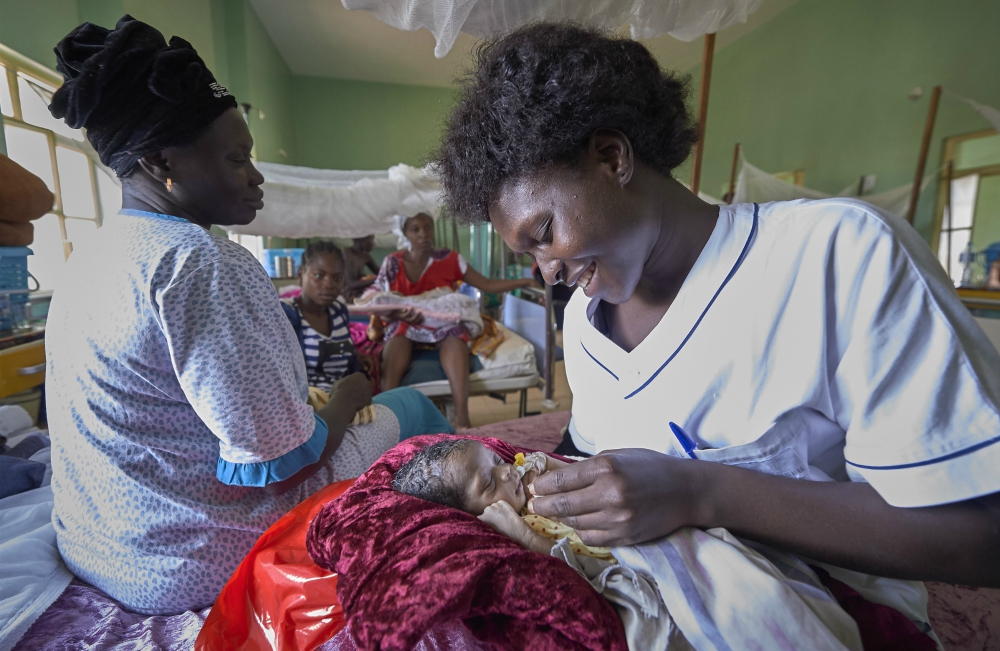