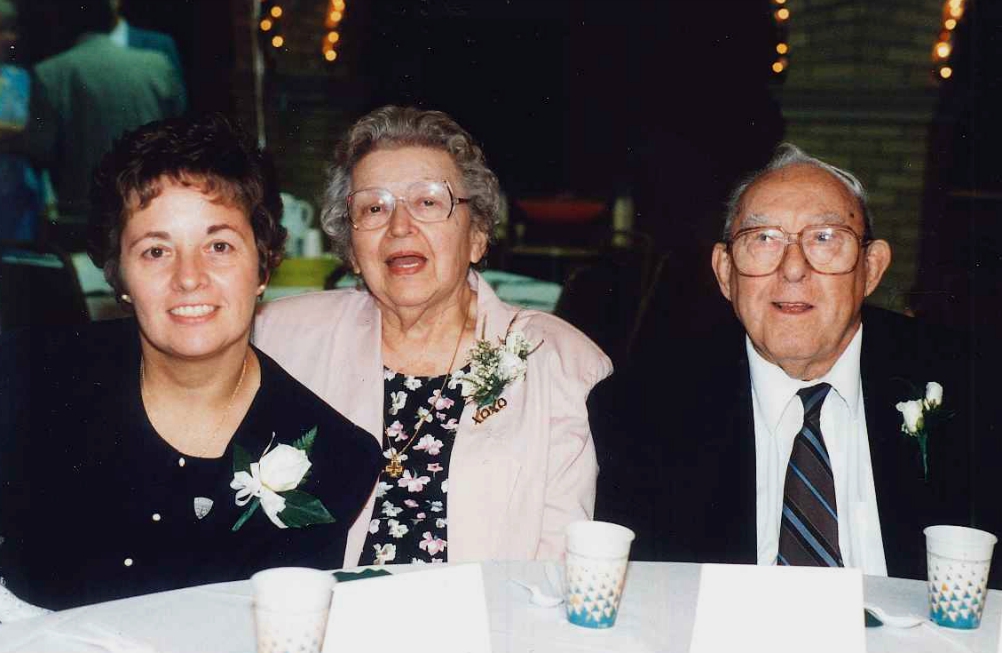 The pickles are tucked on the back lower left shelf of my refrigerator. I can do nothing with them. I cannot open the jar, nor can I eat them. And Loretta Zielinski made good pickles.

My mother made the jar of homemade dill pickles the week before she died. I took the pickles then, many years ago. My sister, brother and I were cleaning out my mom's house. We had pretty much gone through the entire house, packing up furniture and other items, preparing for her move from her beloved Michigan to Ohio, close to my Franciscan motherhouse. My dad, John Zielinski, had died in 2001, two years before.

It was nine days before she was to move to Ohio, and she passed away at her home in 2003. After mom's funeral, we were at the house finishing up the final details of emptying the house, which was already put up for sale.

My sister, Judy, and I were in the kitchen. Judy was the baker, and took mom's great mixer and some recipes. As I was cleaning out the refrigerator, I found the recently made pickles and decided to take them.

My brother, Jim, took the package of her homemade pierogi (Polish dumplings) from the freezer. I placed her pickles in my refrigerator and have not opened them for years. My brother put his pierogi in his freezer. He did not touch them for years.

When my parents died, friends told me that as part of the grieving process, I should take an article of clothing, a book, or anything that they had used or touched. I took an Army photo of my dad, John Zielinski, and his handwritten list of people on his prayer list.

When my mom died, I took a handwritten recipe for "klops" or Polish meatballs, a cardigan sweater, and her jar of pickles. I have made her klops many times, but they never tasted quite the way my mom's did. Her sweater still hangs on the back of my bedroom door; I have worn it a few times. I put the pickles from 2003 in my refrigerator.

The 15-year-old pickles are still in the refrigerator. I told my friend Faith about my mom's pickles, which had been sitting untouched for all those years in my fridge.

I mentioned that I really should get rid of the pickles, which I never intended to eat. I felt that they probably were not good to eat, but I just could not throw them out. Common sense told me to get rid of them, but my heart told me they stayed right where they were in the back of my fridge. Those pickles were a big part of my mother.

Faith asked, "Why do you want to throw them out? What a wonderful memory of your mom. Sometimes, I think we find our mothers where they lived ... like in the kitchen. And with the pickles she left you."

Those pickles are staying right where they are; they are more than pickles. They are a special memory of my mom. They are deep, spiritual symbols to me.

I am in good company feeling this way. I read somewhere — I think in a Mayo Clinic publication — that "reminders of a loss aren't just tied to the calendar. They can be anywhere — in sights, sounds and smells, in the news or on television programs. And they can ambush you, suddenly flooding you with emotions when you drive by the restaurant your wife loved or when you hear a song your son liked so much. Even years after a loss, you may continue to feel sadness and pain when you're confronted with such reminders. Although some people may tell you that grieving should last a year or less, grieve at your own pace — not on someone else's expected timeline."

I know this is true because at Thanksgiving, I especially miss my mom and dad and the wonderful meal we shared at home. I become melancholy each year as I remember her delicious stuffing packed with tons of onions and celery. Sometimes, she pulled out her klops a few days after the Thanksgiving meal when we were tired of turkey. And of course, my dad would say one of his corny lines — "OK, when do we eat?" or "Let's get a hamburger!"

The pain of my parents' deaths has lessened over time and the crying has, too. But I still miss them. And seeing my mother's pickles sometimes brings up how much I loved seeing her cook a wonderful meal for our family and friends. I can remember how her klops tasted, that you could eat them warm with mashed potatoes and gravy, or cold, straight from the refrigerator.

Every time I see a Detroit Lions football game or a Detroit Red Wings hockey game, I recall my dad commenting on the players or coaches. The Detroit Lions always played a football game on Thanksgiving. After the meal, we would clean up the dishes and watch the Lions. It was what happened after the festive meal.

These reminders of my parents bring back good memories of them. This is a normal part of coping with a loss. I love having my pickles in my refrigerator. They are a relic, a sacred symbol of a mom who taught me to make some delicious family foods like homemade soup or golumbki (stuffed cabbage rolls). My dad's prayer book and list of family and relatives he prayed his rosary for in his basement "man cave" show me his deep devotional faith.

Last month, I was cleaning out my refrigerator and came face to face with the pickles. Then it hit me. The significance of the pickles, sweater and prayer lists is that they are relics of my mom and dad. We Catholics have a long tradition of using relics to keep us in touch with the saints, and my mom and dad are certainly in the communion of saints.

So, I cherish my parents' relics. I love having them with me. They bring me tears, joy and intimate memories. I cannot part with them, and I shouldn't.

[Karen Jean Zielinski, a member of the Sisters of St. Francis of Sylvania, Ohio, has lived with multiple sclerosis (MS) since 1975. Her first book, Hope and Help for Living With Illness deals with health and spirituality. She is co-director of associates and director of Canticle Studio, a creative office of products that focus on spirituality and health.]

The lake lures me to pray

A Black nun and a Black writer look at Black Power

Turning toward Jesus with Mary of Magdala