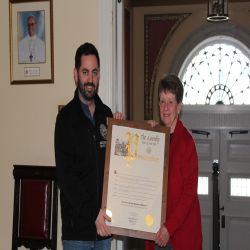 Over the past week, the Sisters of Saint Dominic of Blauvelt, New York, friends, and supporters, enjoyed a Catholic Sisters Week celebration full of community, faith, friendship, and joy.

The Sisters of Saint Dominic saw an overwhelmingly positive response from local parishes in Rockland County in support of their Community Goods Drive to benefit the Siena House, ministry site of the sisters, where Sr. Mary Doris, OP, ministers as Director. Sr. Mary and the other sisters who minister at Siena House expressed their gratitude for the many items donated to the Women and children of Siena House. Donations will be accepted for the Community Goods Drive until Friday, March 18th.

Along with supporting this Drive, friends, and supporters of the congregation also tuned into the sisters’ other virtual events throughout the week.

During the Live Discussion with Dominican College Service and Leadership Scholarship Students on March 8th, participants heard from Darlenys Sanchez and Gee Salim and learned about their experience working at the Motherhouse and getting to know the sisters.

On Wednesday, March 9th, Sr. Rose Ellen Gorman, OP, joined Sr. Valorie Lordi, OP, of the Dominican Sisters of Sparkill, for a live recording of the Hearts Afire Podcast, where they discussed religious life, vocation, and their ministries.

On the same day, Sr. BarbaraAnn Sgro, OP, represented the Sisters of Saint Dominic during an #AskASister Live Discussion. During the Discussion, she and other Women Religious from various Dominican Congregations reflected on their vocation stories, discernment, ministries, and religious life.

A few days later, on Friday, March 11th, the Sisters of Saint Dominic were recognized by New York State Assemblyman Mike Lawler with a Proclamation during Catholic Sisters Week at the Motherhouse.

During the Proclamation presentation, Assemblyman Lawler spoke of the Sisters’ work and the work of other Women Religious throughout the 97th Assembly District.

The last day of Catholic Sisters Week, Monday, March 14th, was a festive one as supporters tuned in to watch the Virtual Celtic Tea. During the Celtic Tea, participants enjoyed preaching and a performance from Sr. Peggy Murphy, OP, of the Sisters of Saint Dominic of Amityville, Irish music from Kian McGeever and Kevin Cronin, and the announcements of our Celtic Tea Raffle winners.