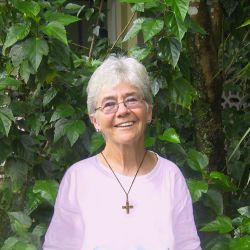 The Sisters of Notre Dame de Namur held a virtual prayer service February 12 to close out the 15th Anniversary Year of the assassination of Sister Dorothy Stang by wealthy landowners in the Brazilian Amazon. The prayer service included the participation of two Sisters who worked alongside Sister Dorothy: Sister Joan Krimm and Sister Jo Anne Depweg. Sister Elizabeth Bowyer also took part. Sister Elizabeth was the Ohio Province Provincial who received the news of Sister Dorothy’s death. The service was opened by Archbishop Daniel Schnurr, of the Cincinnati Archdiocese.

Discussion followed the prayer service, and included interviews of Sisters Jane Dwyer and Kathryn Webster, who also worked with Sister Dorothy and who remain in Brazil carrying on the work of empowering homesteaders in their struggles with wealthy landowners; a reflection by Samuel Clements, who produced a documentary on Sister Dorothy’s work in the year before she was killed (The Student, the Nun & the Amazon); and a reflection by Evan Mack, who composed an opera in Sister Dorothy’s memory.

Action steps suggested by the prayer service organizing committee include the planting of trees and the tending of community gardens, with produce donated to people who are poor. A link to the recorded service and discussion can be found at the Sisters’ Ohio Province website: https://www.sndohio.org/sister-dorothy/dorothy-stang-15th-anniversary-prayer-service. We also invite you to share your reflections about Sister Dorothy using #DotStangLegacy.