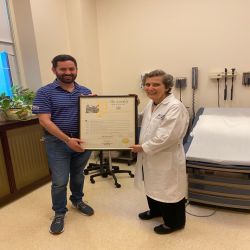 Congratulations to Sr. Mary Flood of the Sisters of Saint Dominic of Blauvelt, New York!

In late April, Sr. Mary was honored as a Woman of Distinction for the 97th Assembly District, which includes Orangetown and Ramapo.

The Women of Distinction honorees were nominated by community members, then selected by Assemblyman Mike Lawler, and presented with an official NYS Assembly Proclamation.