Transformative Education: On the Margins 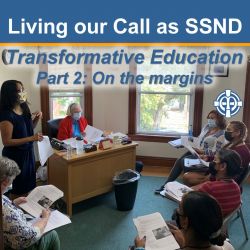 The North American Vocation Team (NAVT) of the School Sisters of Notre Dame (SSND) present “Living our Call as SSND: Transformative Education, Part 2 – On the margins” Wednesday, January 19 at 8 p.m. EST (7 p.m. CST). This second of a three-part online series is intended for single women ages 18-45 to learn more about SSND and their ministry with and among those who are poor and marginalized. More information and registration for the Zoom link is available at ssnd.org/events/1-19-22.

Presenters include four SSND in a variety of ministries, each in a different state. Sister Joan Penzenstadler, vice president of mission and identity at Mount Mary University in Milwaukee, Wisconsin, will give an overview of the SSND call to education and the vision that frames it, especially as it relates, beyond the classroom, to those on the margins. Then Sister Dorothy Zeller, executive director at Good Counsel Learning Center in Mankato, Minnesota, Sister Anne Francioni, executive director at Whole Kids Outreach in Ellington, Missouri, and Sister Peg Regan, former executive director at Caroline House in Bridgeport, Connecticut, will each explain the work of their respective ministries.

The “Living our Call as SSND” online presentations were started in 2020 in response to the need to adapt outreach efforts due to the COVID-19 pandemic. Recordings from the first series of three presentations can be viewed at ssnd.org/become-sister/vocation-resources/loc/, along with the first of the current series “Transformative Education, Part 1 – In the classroom.”