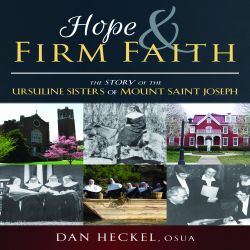 After five years in the making, “Hope and Firm Faith: The Story of the Ursuline Sisters of Mount Saint Joseph,” is available for purchase.

This book brings to life the amazing women who have served God’s people since arriving at Maple Mount, Ky., in 1874. Readers will learn how the Ursuline Sisters operated Mount Saint Joseph Academy for more than 100 years, and also opened Brescia College – now University – in Owensboro, Ky. The Ursuline Sisters opened countless elementary and high schools in Kentucky, Nebraska, Missouri and other states, as far away as New Mexico.

This 650-page book chronicles how the Ursuline Sisters evolved with the world around them and within the Catholic Church. Their story is told through the words of the Sisters who lived during each decade, thanks to the research in the extensive archival records at Maple Mount and elsewhere.

The story of the Ursuline Sisters continues to unfold today, as they adapt to the signs of the times. The Sisters continue to minister in six states and in Chile, South America, while still calling the rural community of Maple Mount home.

The author is Dan Heckel, who also serves as director of Mission Advancement and Communications for the Ursuline Sisters. He is available to talk about the many stories found in “Hope and Firm Faith.” He can be reached at 270-229-2007 or dan.heckel@maplemount.org.