Editor's note: This story was updated Sept. 21 at 3:30 p.m. CDT with new information throughout, including details about the investigation, interrogation and medical examination of Bishop Franco Mulakkal, and comments from Cardinal Oswald Gracias.

Bishop Franco Mulakkal of Jalandhar was arrested by Kerala police Friday, accused of raping a nun multiple times between 2014 and 2016. He is the first Catholic bishop to be arrested in a sexual abuse case against a nun in India.

The 5 p.m. arrest occurred after 15 hours of police questioning spanning three days at a high-tech interrogation cell in Thrippunithura, a suburb of Kochi, the commercial hub of Kerala.

The case emerged on June 28 when a member of the Missionaries of Jesus, a diocesan congregation under the Jalandhar Diocese, accused the prelate of subjecting her to rape and unnatural sex on 13 occasions over a two-year period at her convent in Kuravilangad, south of Kochi.

During the police interrogation, Mulakkal denied the charges, calling them "concocted." He said the nun was upset with him for advising the congregation's leaders to act on a married woman's complaint that the nun had had an affair with her husband.

Television channels in Kerala reported that Mulakkal could not offer proper responses when the police presented documents contradicting his statements. The investigators noted that Mulakkal advised the congregation's leaders to take action against his accuser five months after she had complained to church authorities about the abuse.

The interrogators also refuted Mulakkal's stand that he had not visited the nun's convent on May 5, 2014, when the nun says she was raped for the first time. Police had retrieved mobile tower location data showing the bishop was at the nun's convent on that date. The interrogators said they have collected sufficient evidence to prove the bishop's guilt.

After the arrest, Mulakkal underwent a medical examination, complained of chest pain and was admitted in Kottayam Medical College. Police plan to present the bishop before a magistrate in Palai on Sept. 22.

"We have learned from the media the developments in Bishop Franco Mulakkal's case. It is a sad moment for all of us," the cardinal, the president of the Catholic Bishops' Conference of India, said in a statement.

A group of Missionaries of Jesus nuns who have held a sit-in at a busy intersection in Kochi since Sept. 8 in support of their sister applauded the arrest.

"We came to the streets only because we did not get justice from the church and the government," Sister Anupama, the nuns' spokesperson, told media representatives. The sisters, who have drawn support from various sections of society, said their strike would end with Mulakkal's arrest.

A biological sister of the nun accusing the bishop of rape who had joined the protesters recently with a hunger strike was sent to a hospital Sept. 19 as her health deteriorated.

Cardinal Gracias said the bishops' conference prayed for all involved in the case – Bishop Mulakkal, his accuser, the Jalandhar Diocese and the nun's congregation, the Missionaries of Jesus.

The church leader also said the Indian church expects the law to run its course and for the truth to emerge. "At the moment our prayer is for healing," the cardinal concluded.

[Jose Kavi is the editor-in-chief of Matters India, a news portal that collaborates with GSR and focuses on religious and social issues. He had headed the India operations of Union of Catholic Asian News (UCAN) for 25 years until his retirement in 2012.] 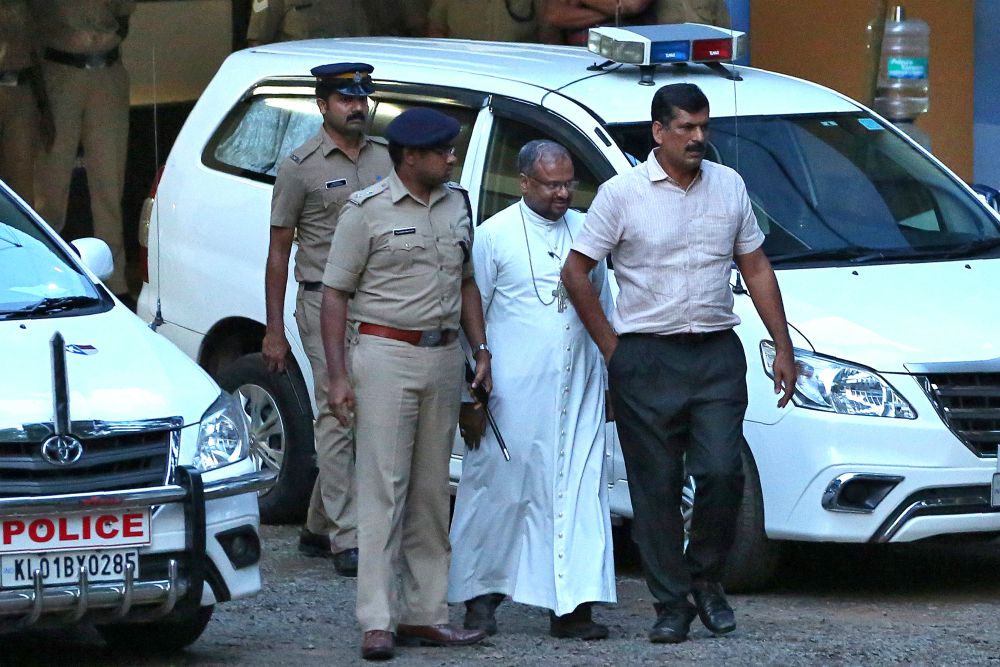