by Jocelyn A. Sideco
Ministry 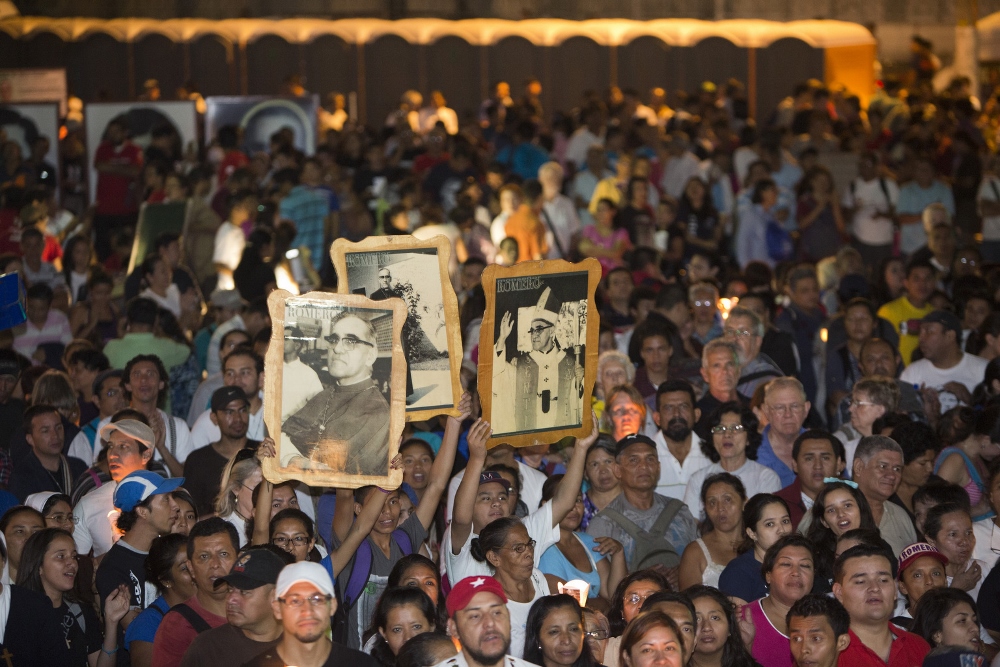 People hold up images of Archbishop Oscar Romero during an outdoor Mass March 21, 2014, in San Salvador to mark the 35th anniversary of his death. The archbishop was fatally shot as he celebrated Mass March 24, 1980. (CNS photo / Octavio Duran)

Days before his murder Archbishop Óscar Romero told a reporter, “You can tell the people that if they succeed in killing me, that I forgive and bless those who do it. Hopefully, they will realize they are wasting their time. A bishop will die, but the church of God, which is the people, will never perish.”

Romero was shot to death as he said Mass March 24, 1980 after he exhorted Salvadoran soldiers to disobey their superiors if they were ordered to attack innocent civilians. The Salvadoran civil war (1979-1992) would eventually claim some 75,000 lives.

More than 250,000 people are expected for Romero’s beatification ceremony on Saturday, May 23, in the Plaza of the Savior of the World in El Salvador’s capital city, San Salvador. Among them will be two Sisters of Providence now living in the United States who are honoring family members lost during their country’s brutal civil war, as well as Romero.

“I want to go! I want to go!” Sr. Vilma Franco remembers shouting when she first heard about her hero’s road to sainthood. “I’m very excited.”

Franco moved to Spokane, Washington, in 2006 from El Salvador, where she had lost her father and six brothers in the civil war. “Moñsenor Romero inspired my vocation. I had been working as a catechist in El Salvador, working for justice and being a voice for the poor.”

She now works in early childhood development at St. Aloysius School in Spokane, where she speaks fondly of taking care of babies. “Children are the future,” she declared with certainty and depth.

Franco’s story is not much different from those of her contemporaries from El Salvador during the time of the civil war. Her first-hand experience of a suffering nation compels her persistence. Her mother is a very strong woman who loved her husband and her children. Franco recalled: “My mother would say that if she suffered, she didn’t have to grieve, she just prayed for compassion and faith to give more so that she can continue to walk forward.”

Her family’s hope and healing are personified in her nieces, who are university students at the University of Central Americana in San Salvador. “I look forward to celebrating this moment with them.” 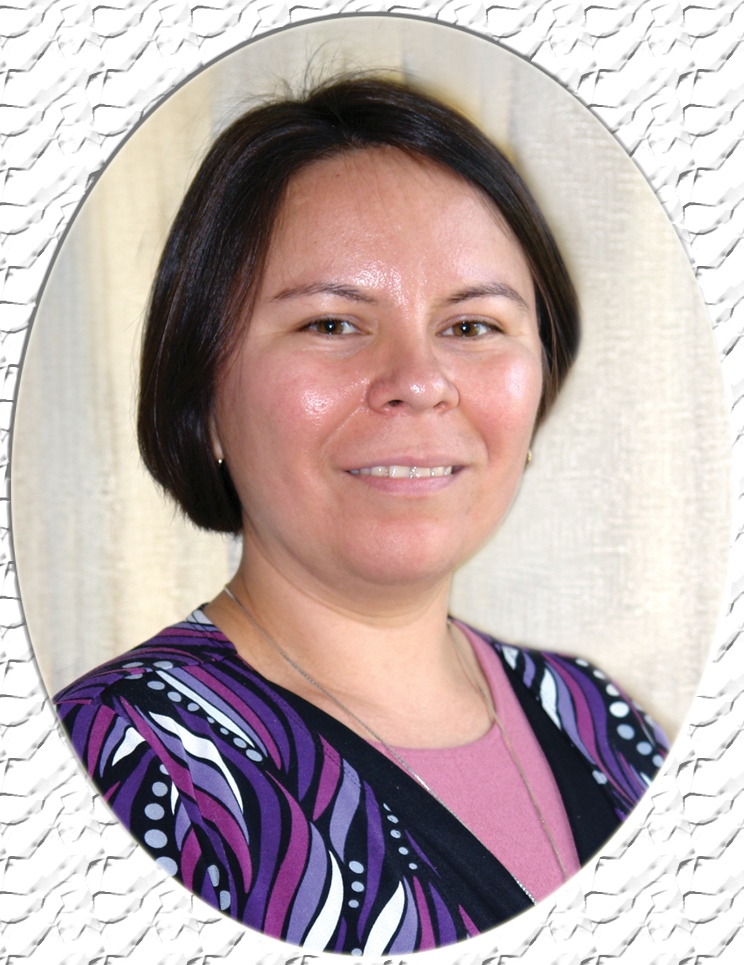 The United States’ involvement in the Salvadoran Civil War is complicated. According to the PBS-produced documentary “Enemies of War:”

The Civil War raged on in El Salvador, fueled by U.S. aid to the Salvadoran military. The government harshly repressed dissent, and at least 70,000 people lost their lives in killings and bombing raids waged against civilians throughout the countryside. The country’s infrastructure had crumbled, and the nation appeared to be no closer to its goals of peace, prosperity and social justice than when the process began.

Among these dead were Romero, Franco’s father and brothers, and José Estanislao Orellana Villalobos, the father of another Sister of Providence, Sr. Ana Orellana-Gamero.

“I was living in Italy when it happened,” Orellana-Gamero explained. “My uncle, the local priest, told me my father died of a heart attack. It wasn’t for another year that I was told what had really happened.”

José Villalobos, fondly referred to as Tanis, had been a catechist in El Congo, a city north of San Salvador, serving with a guitar in one hand and his Bible in another. He received death threats from the government’s military just months after Romero’s death for the way he preached the Gospel, Orellana-Gamero said. “He would say, ‘The Gospel invites us to imitate Christ in all senses of the word.’ ” 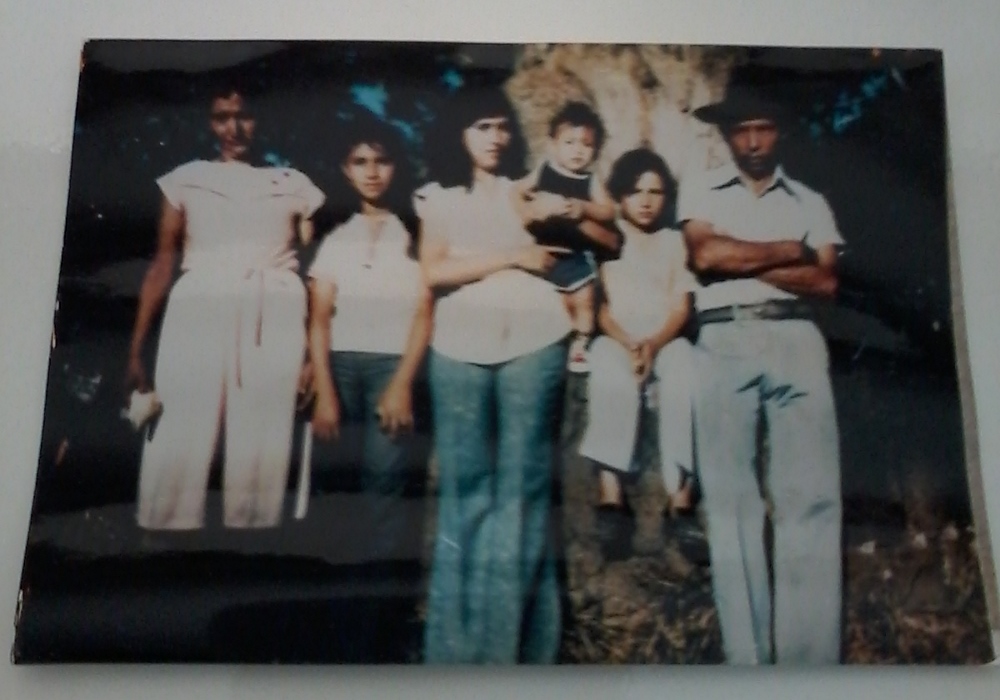 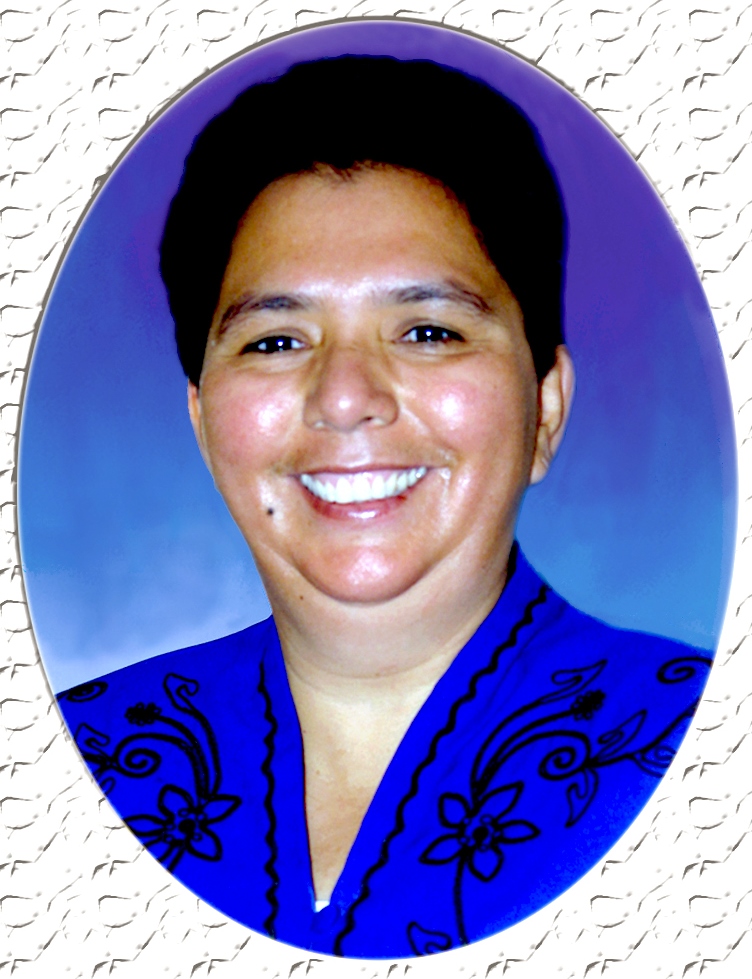 Military death squads captured, tortured, and killed Villalobos on March 16, 1983. His body is yet to be found.

Now Orellana-Gamero works in Portland, Oregon, with people who are homeless and with couples seeking reconciliation. She transferred her vows from the Mothers of the Orphans to the Sisters of Providence in 2005 after having been reunited with her mother, Transito, sister, Luisa, and others.

“My father worked for Archbishop Romero as a catechist,” she recounted. “Monseñor was our friend. We were devastated when he was killed.”

Orellana-Gamero cherishes her father’s memory and shares inspiration from a few letters he wrote her while she was living in Italy.

Here are a few lines from one:

Remember, my dear, it is not a job to be a nun. When you say ‘yes’ [to the Lord], say ‘yes!’ Being a nun is not just about prayer, it is about action. You must be authentic with the poor people [who are suffering]. 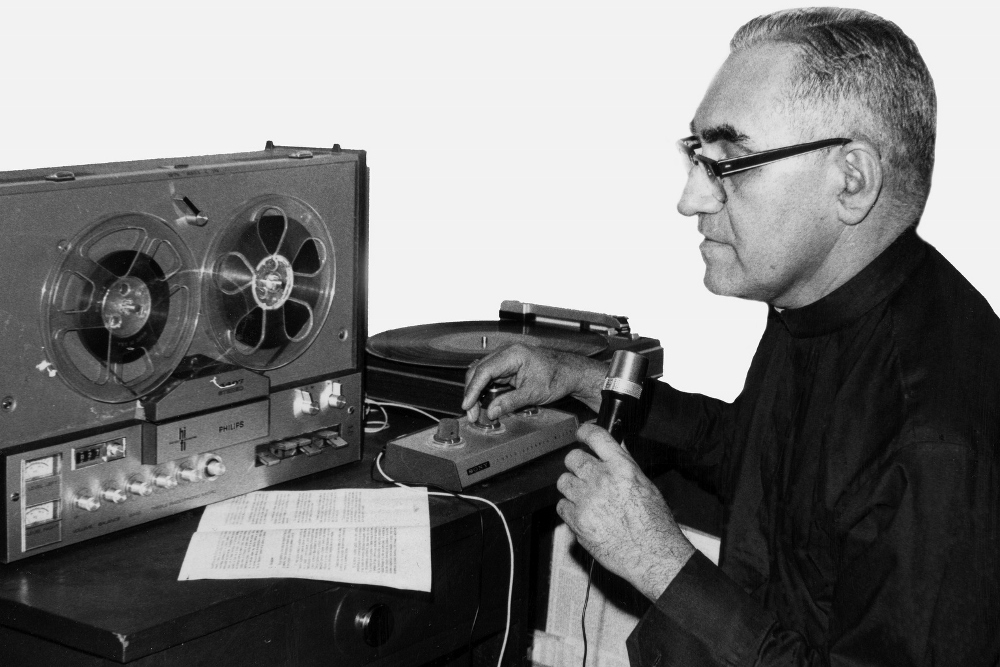 Archbishop Oscar Romero of San Salvador is seen in an undated photo working in an improvised radio studio in Salvadoran capital. Pope Francis formally recognized that Archbishop Romero was killed "in hatred of the faith," clearing the way for his beatification. (CNS photo / Octavio Duran)

Both Franco and Orellana-Gamero minister with the spirit of Romero. Their journey this week to the beatification ceremony is just part of a longer journey of faith, justice seeking and reconciling – and hope

Part of this journey included steps towards U.S. citizenship for Franco.

“Reconciliation with the country [that provided military education for those who killed my father] is my call from God,” she said. Healing the wounds of the past with a precise vision for hope in the future motivated Franco to become a citizen in January.

Now her dream is to go back to El Salvador and minister with other Sisters of Providence in their mission in La Papalota, where they focus on education and the formation of youth. In dialogue with her leadership team, Franco has faith that God will continue to provide for her and the people she is led to minister with.

“Whatever Romero wants for me is what I want. He has always guided me. I want to be like him.” Franco continued, “He’s already holy. He’s already a saint. This celebration will be meaningful because now he will be recognized by the whole church!”

Orellana-Gamero remembers praying in the Metropolitan Cathedral of the Holy Savior in San Salvador on the 25th anniversary of Archbishop Romero’s death. She met a man who directed her to a group of students from the University of Central America under the direction of Sr. Griselda Ireata.

Orellana-Gamero’s mother was interviewed by members of the group gathering information on martyrs. “My family and I are so excited,” she said. “Someone thinks that my father’s life story is most qualified.” 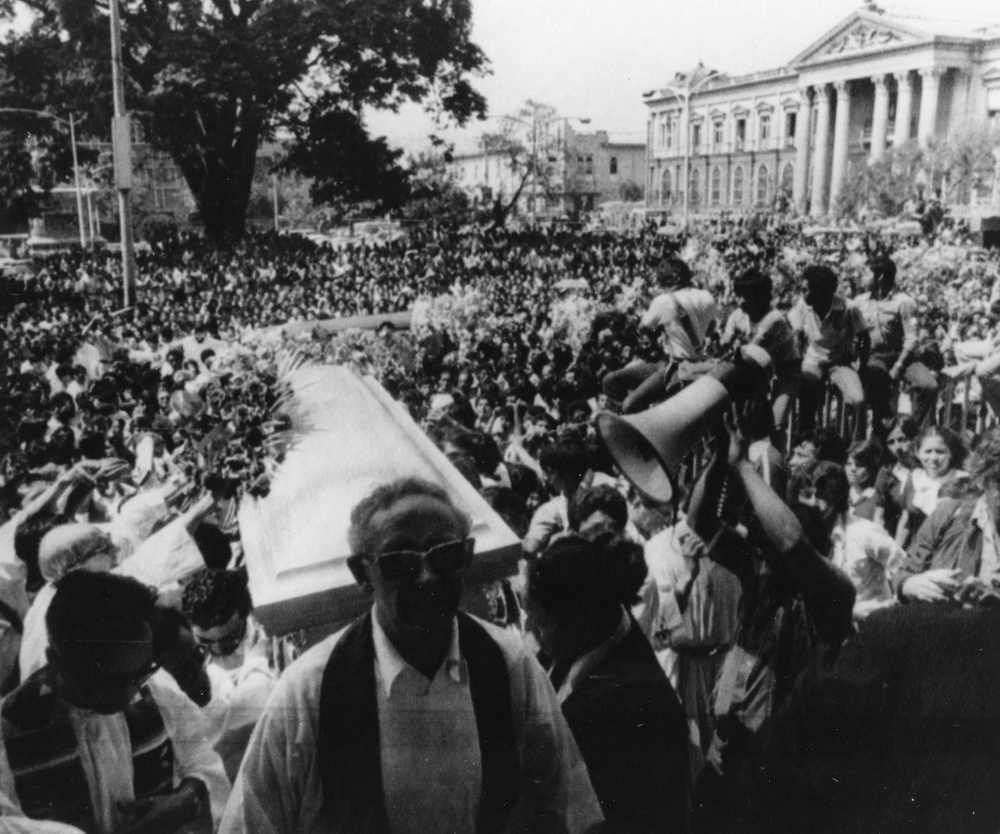 Thousands gather outside the Metropolitan Cathedral in San Salvador March 30, 1980, as the casket of slain Archbishop Oscar Romero is carried inside for a funeral Mass. (Scan of CNS file photo)

Information is being collected to name others as martyrs of the faith. “God chose me to help name Archbishop Romero’s companions [in this work of justice],” said Orellana-Gamero. “This experience will bring healing to my family.”

Despite not being able to locate her father’s body, she is convinced that through Romero’s intercession, living the Gospel actually does mean raising the poor.

“My father and Archbishop Romero,” she said, “have shown me how to give my life for others, for the poor.”

[Jocelyn A. Sideco is a retreat leader, spiritual director and innovative minister who specializes in mission-centered ministry. She teaches bioethics, feminist theology, Christian sexuality, and Christian Scriptures at Bishop O'Dowd High School in Oakland, Calif. Visit her online ecumenical ministry, In Good Company, at contemplativecompanions.org or email her at jocelyn@ingoodcompany.net.co.]

In Togo, a ministry helping people living with HIV is a sister's life work