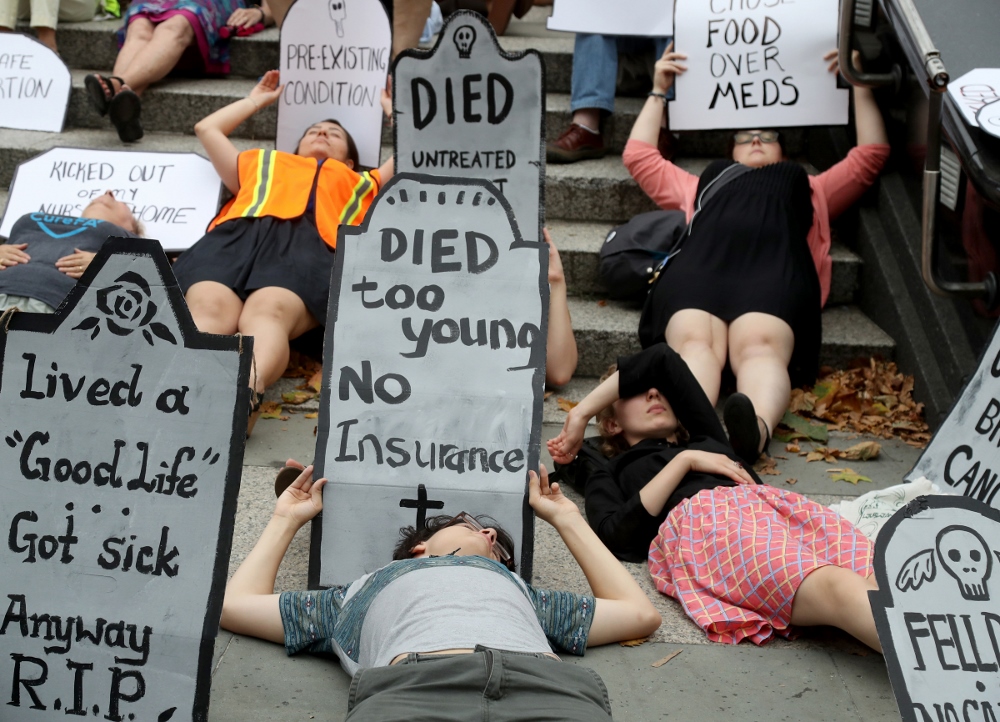 As the United States Senate prepares to again tackle health care reform this week, senators will have the voices of thousands of sisters to consider.

A letter signed by 7,150 women religious from all 50 states was delivered to the Senate on July 24, urging senators to vote against any bill that repeals the Patient Protection and Affordable Care Act or cuts Medicaid. The effort was coordinated by NETWORK, a Catholic social justice lobby.

"The mission of Catholic Sisters has always been to serve our nation's most vulnerable people," Social Service Sr. Simone Campbell, executive director of NETWORK and the letter's author, said in a statement. "As such, we are united in opposition to the current Republican healthcare proposals."

A similar letter in 2010 was key to the passage of the Affordable Care Act.

As Catholic women religious, we have witnessed firsthand the moral crisis of lack of quality, affordable healthcare in this country. We have seen early and avoidable deaths because of lack of insurance, prohibitive costs, and lack of access to quality care. We fought for the expansion of coverage in the Affordable Care Act because we saw the life-giving value of crucial healthcare programs such as Medicaid. This program covers over 70 million Americans, including children, pregnant women (and nearly half of all births in this country), people with disabilities, people struggling to get by, and senior citizens. Further, some of our fellow women religious rely on Medicaid in nursing homes when we can no longer care for our sisters at home.

"The BCRA [Better Care Reconciliation Act] would be the most harmful legislation for American families in our lifetimes, and it goes against our Catholic faith teaching," the letter says in bold type.

"The BCRA would end the Medicaid program as we know it by taking lifesaving healthcare away from millions," the letter states later. "The BCRA takes hundreds of billions of dollars from Medicaid and gives it to the very wealthiest individuals and corporations in the form of tax breaks. This is simply immoral and contrary to the teachings of our Catholic faith."

Campbell said it is hard to believe the way the Senate rushed the legislation, drafting it behind closed doors and leaving senators unsure of what they might be voting on.

"Since this letter was circulated, Senate leadership has repeatedly changed course — from the BCRA, to a repeal of the Affordable Care Act without a replacement, to amendments of bills from 2015," she said in the statement. "This is not good governance."

"We applaud Legislators both Republican and Democratic, who have called for a bipartisan effort to get a bill that truly helps this country have available, accessible and affordable health care for all. ... This country needs and deserves a healthcare bill that truly delivers quality and affordable healthcare to all Americans," Keehan said in a statement. "Health is too critical to be allowed to be a partisan issue."

St. Joseph Sr. Mary Pellegrino, president of the Leadership Conference of Women Religious, which represents about 80 percent of sisters in the United States, said in a statement that any health care reform needs to guarantee the right to health care for everyone.

"As women of faith, we take seriously the gospel call to care for those in need. We are committed to a faith-filled vision of healthcare that guarantees health and dignity to all regardless of their station or circumstance," Pellegrino said in the statement. "We urge Senators to reject this bill and seek a bipartisan solution that will guarantee the right to healthcare for all."

NETWORK officials said the signatures were gathered in one week.

"Senators, this is a moral issue," Mercy Sr. Carren Herring said in a statement. "In a country that enjoys a high standard of living, it is wrong to deny access to life-saving medical care to our people."

Any health care reform proposed must meet several conditions, which NETWORK calls its "Ten Commandments of Healthcare," such as prohibiting discrimination against women, the elderly, people in poverty or those with pre-existing conditions, and should expand Medicaid to serve the most vulnerable.

Intentionality will connect our goals across the world

The line between us and them

Sr. Patricia Chappell has long been a leader. Now she's being honored for it