Editor's note: GSR is featuring Part 1 of its four-part series on the U.S. prison system and sisters who work with current and former inmates and advocate for a change in policies. Read Part 2, Part 3, and Part 4.

Ash Wednesday in Jefferson City, Missouri, was gray and frigid. Bundled in unintentionally coordinated purple coats, Srs. Mary Ann McGivern and Carleen Reck stepped out of St. Peter Catholic Church where the 7 a.m. Mass had just ended and made their way across the street to the Missouri State House.

The Loretto Sister and the School Sister of Notre Dame had driven the 130 miles from St. Louis to Jefferson City the night before. This morning, girded with their ashes and their encyclopedic knowledge of Missouri legislation, they were ready to talk criminal justice reform with some of the state's elected representatives.

McGivern, the former director of Project COPE, an inmate re-entry program, has been advocating for the rights of inmates and former inmates for about 10 years. Reck, who is the director of Criminal Justice Ministry, has been doing it for 17. Both women know that the work they do isn't always easy for others to understand and helping to change attitudes is part of the mission.

"This is not like selling things for helping babies or puppies," Reck told Global Sisters Report. "People have to really rethink it, and it takes a little longer to help them rethink some of these things."

By "these things," Reck means the reality of the prison system in the United States. It's often assumed that only hardened criminals go to prison, and that it's for public safety that they're kept there. Yet with more than 2 million people behind bars, the United States jails more people per capita than any other country in the world — and it's jailing mostly black men for minor, nonviolent drug offenses, even though black men are no more likely to use drugs than white men.

The U.S. doesn't just, or even primarily, put hardened criminals behind bars. It imprisons millions of mostly nonviolent, mostly nonwhite, already marginalized people. Then, after sweeping these people out of mainstream society, when and if they are released, they are ushered into a system that can keep them trapped in cycles of poverty, homelessness and addiction.

Last month, President Barack Obama granted early release to 61 inmates as part of his stated goal to right some of the political wrongs that created the current situation. Not all criminal justice advocates were impressed, given the 9,100 clemency petitions still pending, but that's one reason advocates like McGivern and Reck keep showing up at congressional doorsteps. There's still a lot of work to be done.

After four hours at the State House, the two sisters — along with four representatives from Empower Missouri's Criminal Justice Task Force — had preached to five congressmen the good news of parole board reform, criminal record expungement, and the need to stop job discrimination against ex-offenders, and had dropped in unannounced to check in with two more lawmakers.

"I'm feeling really good about the day," McGivern said. "The meetings with Ron Richard, the president pro tem of the [State] Senate, and with the speaker of the [Missouri] House were really key. And so everything else was extra."

The problems in Missouri's criminal justice system have been under intense national scrutiny since 2014, when Darren Wilson, a white police officer in Ferguson, a suburb of St. Louis, fatally shot Michael Brown, an unarmed black teenager. It was only a year ago that the U.S. Department of Justice released its searing takedown of the Ferguson Police Department.

While Wilson was not indicted in the shooting, the Justice Department found that not only were black residents in Ferguson disproportionately targeted by the mostly white police force, but "these disparities occur, at least in part, because of unlawful bias against and stereotypes about African Americans."

The Justice Department's seven-month investigation found that black residents in Ferguson were more likely than whites to be arrested, to be stopped by the police while driving, and to be searched by the police after being stopped — despite the fact that they were 26 percent less likely to have anything illegal in their possession.

Black residents were also routinely jailed for minor offenses and then required to pay exorbitant fines to secure their release.

The DOJ's findings were a revelation for some into the racism and classism that can infiltrate law enforcement agencies. But for others, the report did little more than prove just how similar Ferguson was to the rest of the country.

Commenting on the DOJ report on For Harriet, a blog for black women, contributor Brittany Dawson called it a "wonderful avenue to approaching systemic troubles," but added that racism in law enforcement neither began nor ended with Ferguson. "Until individuals in positions of privilege become self-informed on not only their own power, but the pervasiveness of institutionalized racism and inequality, similar summaries will be ignored."

Ask criminal justice experts how the United States got to a place where millions of black men are routinely swept out of mainstream society, and many will point to the war on drugs launched by President Richard Nixon in the 1970s and expanded by President Ronald Reagan in the 1980s. Just last month, Harper's published an article in which the author recalled speaking to Nixon's domestic policy chief, the late John Ehrlichman, in 1994. Ehrlichman told the author that the war on drugs was created to punish blacks and liberals for the civil rights movement and for not supporting the Vietnam War — that it was all a bunch of lies told in order to "disrupt those communities."

Undoubtedly, the modern age of mass incarceration began when the Nixon and Reagan administrations began zeroing in on drug users and sellers. But some criminal justice experts believe the en masse criminalization of black people began even earlier than that — back in the 1950s, when a "law and order" rhetoric emerged in American politics in direct response to black civil rights activism.

"Southern politicians and law enforcement officials who called civil rights protesters 'thugs' and decried 'crime in the streets,' for example, were attempting to define protest activities as 'criminal' rather than political in nature," writes Katherine Beckett in her 1997 book, Making Crime Pay.

When white politicians of this era vowed to be tough on crime, it was understood that they meant they would be tough on the "lawless" blacks who held sit-ins at lunch counters in North Carolina and who rioted in the streets of Harlem in New York City.

By the time the war on drugs began some 30 years later, black people and, perhaps more importantly, black poverty had already been sufficiently criminalized in the dominant American culture: Black women were welfare queens with houses full of crack babies while black men were gunslinging gangbangers and drug dealers.

As Michelle Alexander writes in The New Jim Crow, her blockbuster book on race and incarceration, when pollsters in 1995 asked Americans to close their eyes and picture a drug user, 95 percent of them envisioned a black person, despite the fact that in 1995, black people made up only 15 percent of drug users in the United States.

Marc Mauer, executive director of The Sentencing Project, a criminal justice advocacy group in Washington, D.C., puts it this way: When the war on drugs began, "the image of a crack offender was a young black male, regardless of whether it was accurate."

The anti-drug policies and legislation that followed seemed tailor-made to put black people behind bars. For example, in 1986, the Anti-Drug Abuse Act made the federal penalties for crack cocaine, a so-called black drug, 100 times harsher than the penalties for powdered cocaine, a so-called white drug. One only had to be found with 5 grams of crack cocaine to trigger a felony charge, while it took 500 grams of powdered cocaine to be charged with a felony.

Two years later, Congress amended the law to make crack cocaine the only drug for which a first-time possession offense meant a mandatory minimum prison sentence.

This disparity between punishments for crack and powdered cocaine was mitigated somewhat in 2010, when the Fair Sentencing Act raised the felonious possession amount of crack cocaine from 5 grams to 28. However, the punishments still aren't equal, and two years later, most people in federal prison on drug charges were still there for crack cocaine, and 88 percent of those people were black.

"It's so clear that we have an accumulation of errors in our legislation," McGivern said before leaving the Missouri State House. She added that it's the inmates she's met that keep her pushing for criminal justice reform, even now that she has technically retired. She said she sees God in inmates more than any other group of people.

"I've met people in prison that I just had to come and talk to the state legislature about," she said. "I guess that's the Holy Spirit. I don't know who else it would be."

Part 2 examines the rehabilitation available — or not — in prisons and how some sisters minister to these "throwaway people." Read Part 2 now. 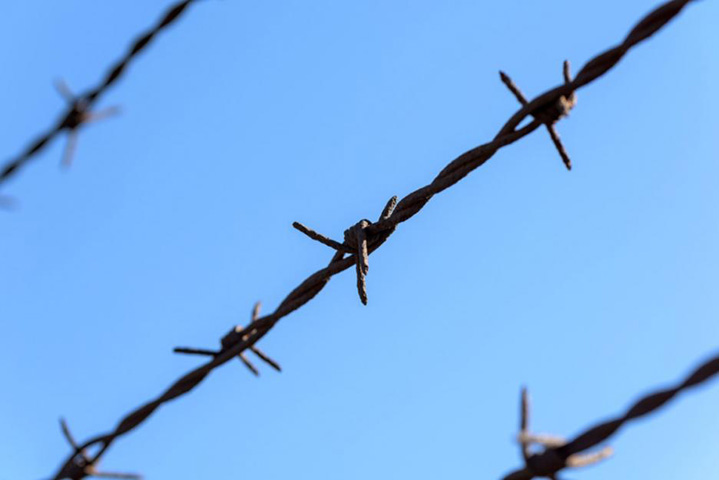 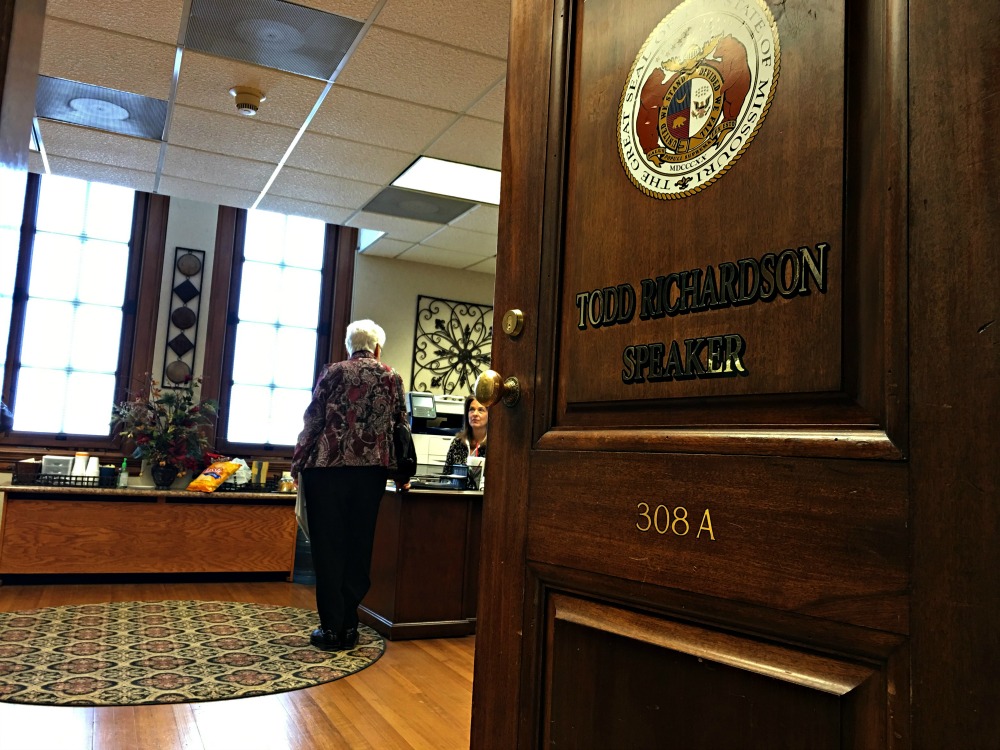 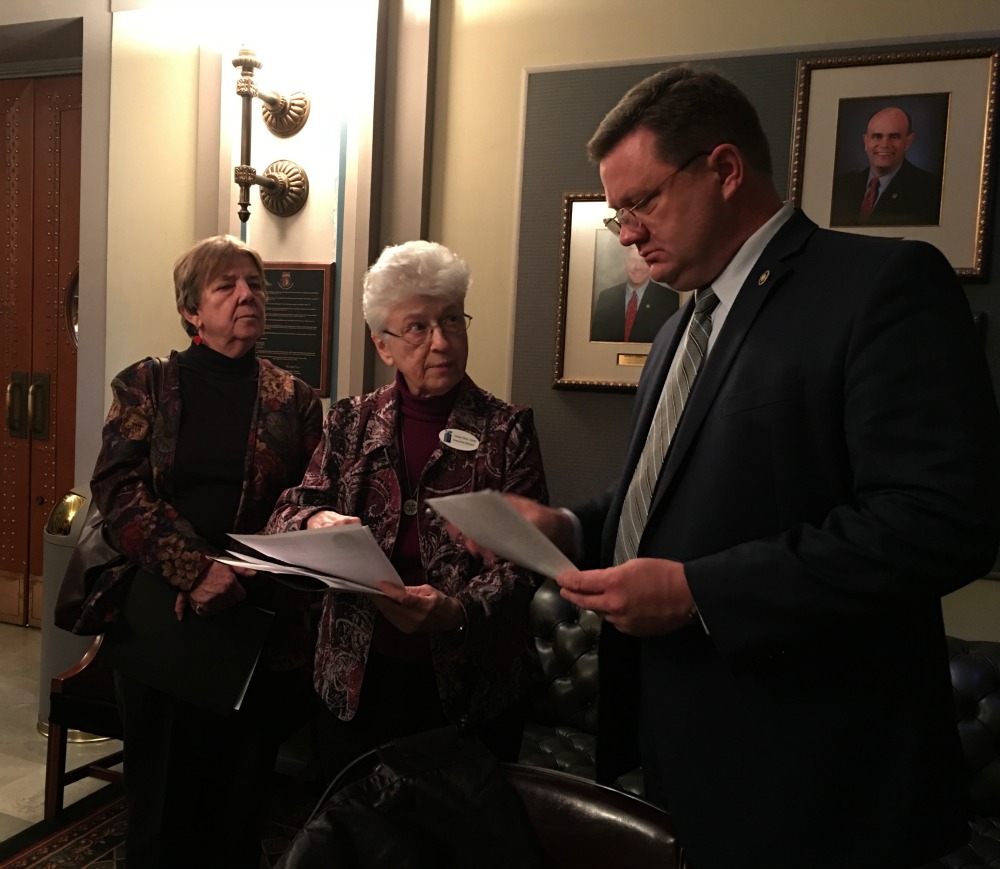 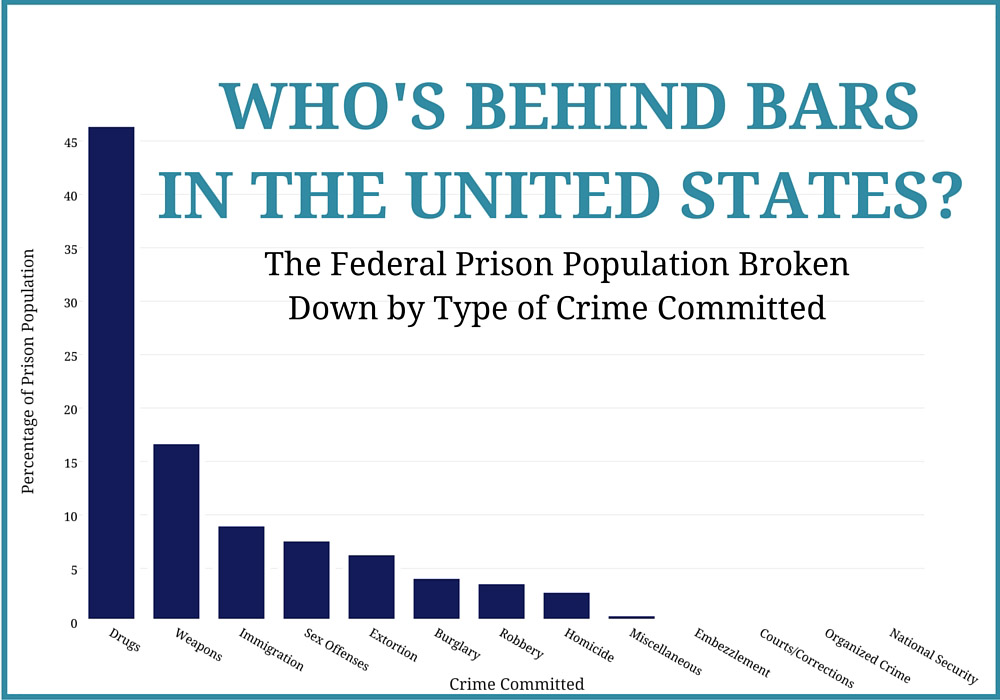 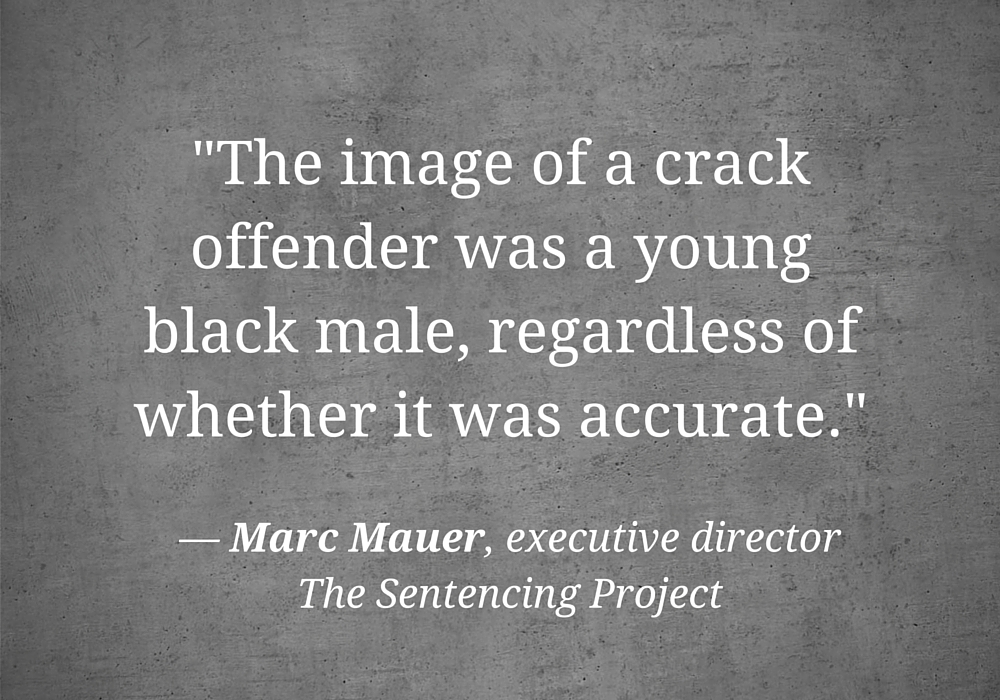 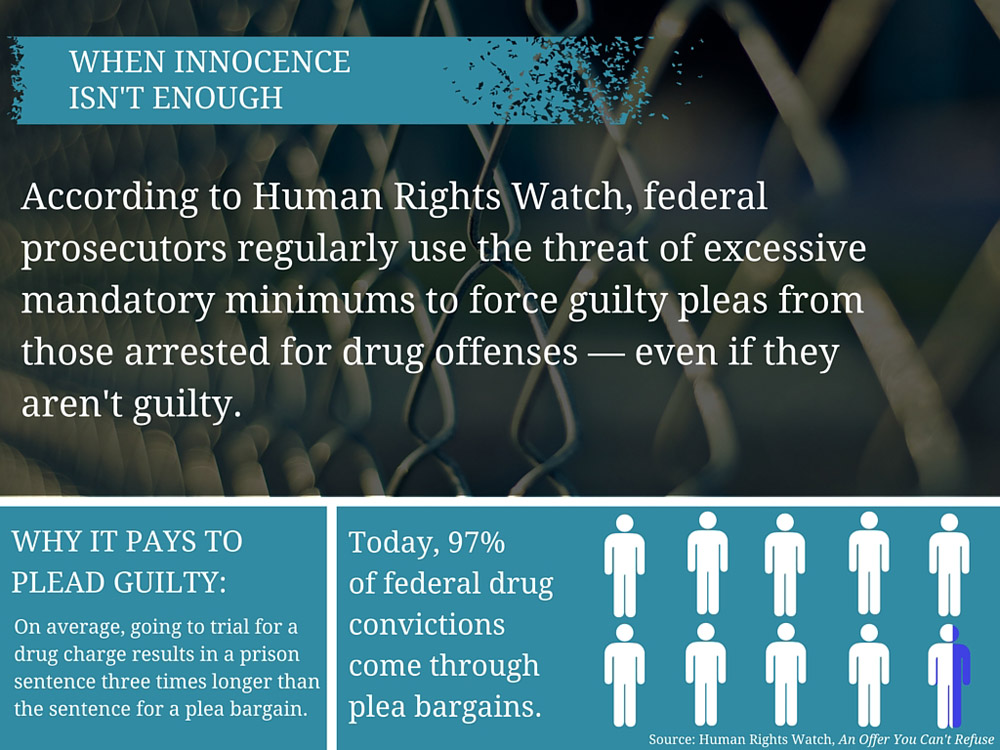