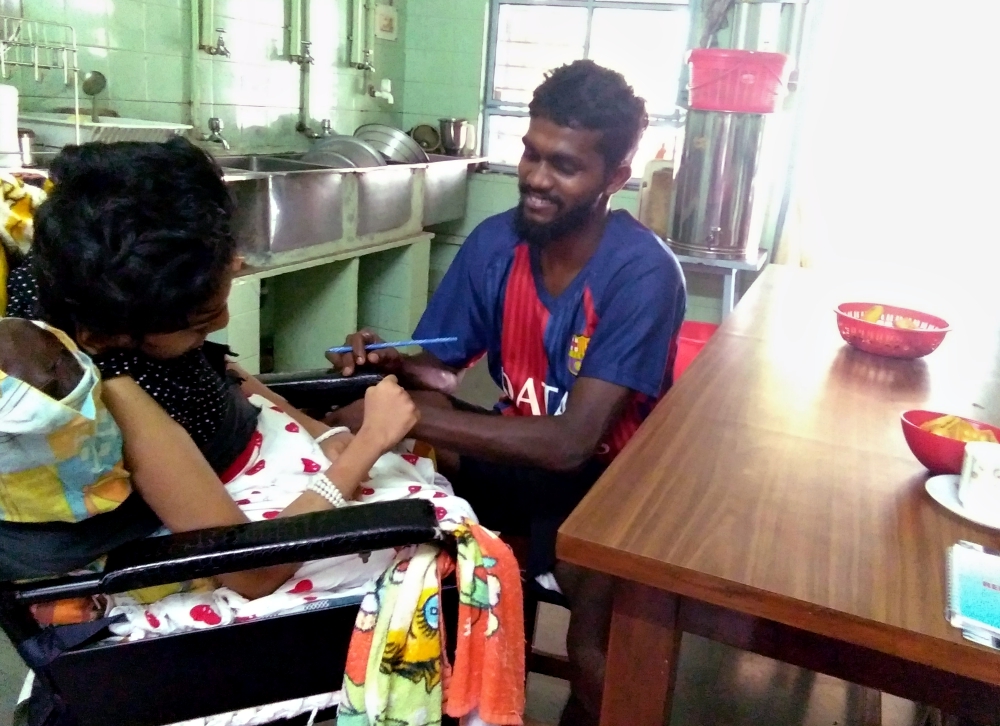 Alfred Palan, a young volunteer, helps a girl in the kitchen of the Marian House of Charity at Versova, a suburb of Mumbai, western India. (Lissy Maruthanakuzhy)

Mumbai, India — It is late evening. Noises inside the Marian House of Charity have subsided. Sr. Valencia Possa and her companions are tucking their children into bed, three in each room, after the evening meal.

"Each of them needs special attention," Possa says as she unbuckles a child from his chair to put him on the bed. When the children — all with mental and physical disabilities — are in bed, the sisters and their volunteers get ready to retire for the night, each going to separate rooms where the children sleep.

"Our children need our constant help, night and day. So we do not have separate rooms for sisters," Possa, a diminutive nun in a gray habit and white veil, told Global Sisters Report.

"We call all of them children although they are between 12 and 60. They have not grown mentally," the nun explained, sitting on a chair as three residents in their 20s crawl past her on the floor.

She is a member of the Minor Carmelites of Charity, an Italian order that manages the Marian House of Charity, hidden away among trees at the dead end of Versova, a remote suburb of Mumbai, India's commercial capital. The house has 29 residents with mental and physical disabilities, including 14 who are in wheelchairs and unable to do anything by themselves.

"We take only mentally challenged and handicapped children. Our children are abandoned by relatives who found it difficult to take care of them. We give them a home and treat them as part of our family," Possa explained.

She says many such children come to them, "but we take only limited numbers so that we can look after them well."

The sisters and volunteers never leave the residents alone, she says.

Sr. Annmaria Capiluppi, the delegate superior who also works in the house, says that their place is difficult to reach. "There is a parish nearby, but there is no proper road to come here. Visitors hire a vehicle to come, and walk miles to the bus stand when they go back."

However, people come looking for the house when they are in need. "Even if we do not take them, we give them food and other materials," Capiluppi explained.

The superior says they started the house in India in 1980 to look after those rejected by society in a quiet place. The congregation has 14 members working in India, operating two houses in Mumbai and two in Kerala, southern India. Seven of them work in the Versova house. Four postulants and two girls also stay in the house.

Capiluppi said their congregation began in Italy during World War II. Telling about their origin, the superior said the war had destroyed everything. Men were taken for war from the villages, leaving behind only women and children.

A parish priest, Fr. Mario Prandi (1910-86), was touched by the sight of starving children on the roadside in Italy and opened a house with his parishioners' help. "He realized the children also needed a mother's concrete presence," Capiluppi said.

The convent of Marian House of Charity (Lissy Maruthanakuzhy)

Young women parishioners, who helped in the house, came together to form a community of religious. Prandi guided them.

The priest and pioneer members came to India in 1980 to open the house on the campus of Our Lady of Health Church, Versova.

The parishioners of Versova volunteer to help the nuns manage the house.

"It is fun to be with them. I know exactly what they want," said Veera D'Souza, a volunteer who was introduced to the House of Charity when she was 10.

As a child, D'Souza used to come to a park near the nuns' place and made friends with a 3-year-old girl from House of Charity. Since then she has regularly visited there. "I do whatever work I can in the house, like cooking and bathing children. I am free to move about the house," the 20-year-old woman told GSR.

D'Souza spends nights in the nuns' house when her parents are away. "The children are very excited when we are in the room. Most sleep quietly within 15 minutes in bed," she added.

"The house makes the children part of a family. This is what differentiates the house from other charitable and religious institutions," the young volunteer said.

She said they serve dinner at 6 p.m. for an hour, then recite the rosary with the children.

"The rosary is led by a boy who recites the prayers from memory," D'Souza said. 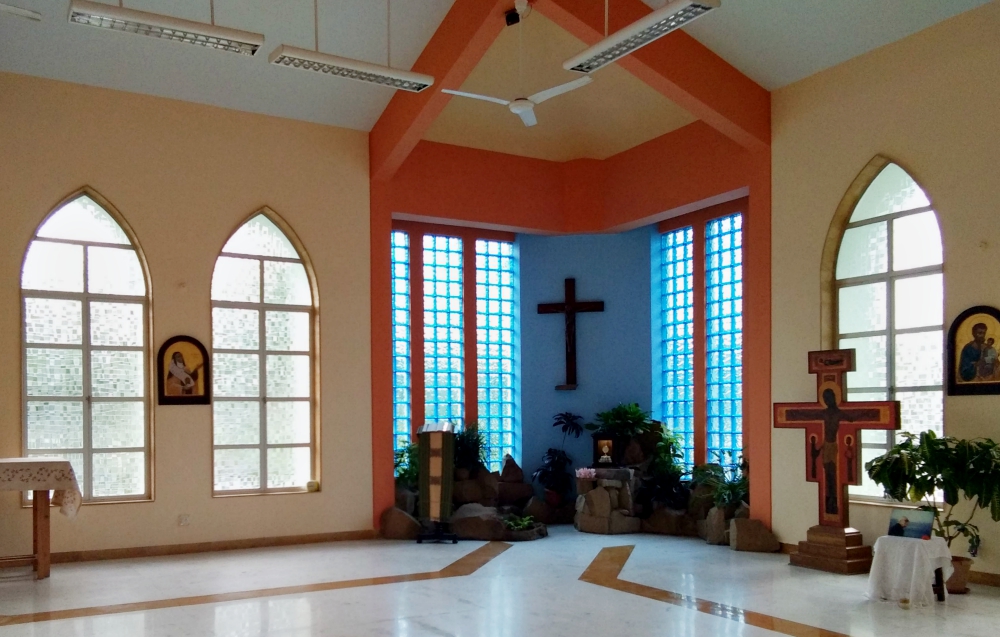 The chapel at the Marian House of Charity at Versova, a suburb of Mumbai, western India (Lissy Maruthanakuzhy)

She said they first put to bed the two residents who cannot move on their own. Others move around until night prayers at 9.

She also clarified that no nun sleeps in the rooms for boys. "There is a boy with them at night. But the sisters go around checking," D'Souza explained.

Alfred Palan, another parish volunteer, finds the House of Charity "a living example of God's universal love" that provides parishioners an opportunity to practice works of mercy.

He began helping the nuns when he was 12 after receiving the sacrament of confirmation. "I just came to help and it has continued up to now," he told GSR.

He does all kinds of jobs. "I do anything here, help clean vegetables or cook. Today, I came at 6 a.m. and gave baths to all the boys," he said, wiping the face of a girl fastened to a chair.

Palan also invites his friends, including Muslims and Hindus, to the Marian house. "I tell them, 'Spend time here instead of roaming around aimlessly.' And they all come."

He recalled that he was afraid of the residents initially. "They do not speak or walk. We could not communicate. I found two tied to the windows to prevent them from roaming around."

He said the sisters taught them how to deal with the people in their care and talk to them. "Now we have become friends. We can understand their language," he added with a smile.

Palan comes around 8 a.m. and spends the entire day at the house. "I go home only in the evening. Once I get a job, I will come on weekends," he said.

The Our Lady of Health Church at Versova, a suburb of Mumbai, the parish of Marian House of Charity (Lissy Maruthanakuzhy)

Princy Fernandes, a teenage volunteer, said she comes to help after her college hours. "The parish announces if the house needs any help," she said while spoon-feeding a child in a wheelchair.

"I enjoy being with them. My parents are also happy that I come here to help," she added.

The nuns send children who can walk and do activities to Prem Nidhi ("love treasure") Special School, which is managed by the sisters on the convent campus.

Principal Femina D'Sa admits that taking care of the children with disabilities "day in and day out" is tough. "I am here to do a mission, not for fame," D'Sa, who joined the school in 2009, told GSR. "Here I am very happy. It is a learning experience as I work here."

At the school, the children are taught various skills, such as making greeting cards for feasts and other occasions, tablemats, gift bags and decorative animals. "Sometimes teachers have to give the finishing touch," D'Sa said.

The principal said the teachers have to be innovative and sensitive to the children to build up their self-esteem. "The sisters also teach them to say 'sorry' or how to greet others."

Possa said one of their children now goes to college. "She is physically challenged and was abandoned by her relatives."

Pointing to another boy fastened to a chair, the nun said, "His parents brought him here, as both were sick. They died two months later. His sister is married and comes to visit him. She is not able to look after him."

A big challenge for the nuns and their helpers is to understand the residents' needs. "Most do not speak. We know what they want from their actions," Possa explains.

"Sister, Sister," a boy calls her to his side, takes her right hand and places it on his neck.

"Yes, you have a fever." She smiles as she pretends to check his temperature. The boy is happy and calls another nun to him. "He just wants attention," Possa says as she smiles and pats his shoulder.

"Our children give joy to all those who come here. That is their gift to them," she says.

Sisters' killer sentenced to life without parole in Mississippi

A meaningful visit to Cambodia provides an example of service