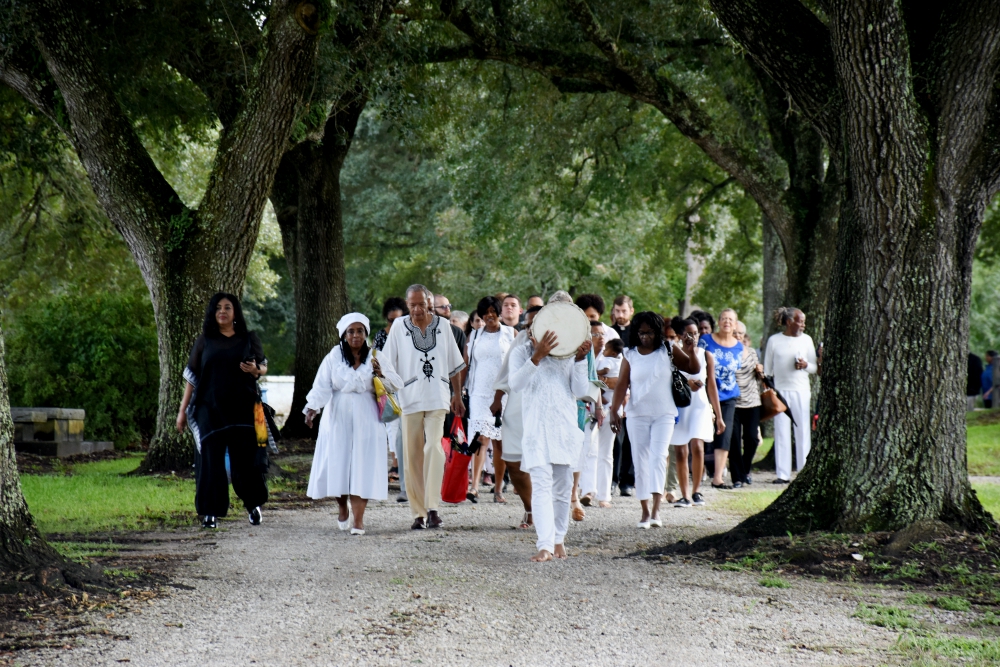 On Sept. 23, 2018, during the "We Speak Your Names" memorial gathering, a drummer leads a procession from St. Charles Borromeo Church to a nearby cemetery where many of the people who were enslaved at the sisters' Grand Coteau property are buried. (Society of the Sacred Heart/Linda Behrens)

Sixty-four-year-old Roslyn Chenier, an Atlanta-based computer software consultant, had been chipping away at her family tree for about eight years when one day, out of the blue, she received an email from Society of the Sacred Heart Sr. Maureen Chicoine in New Orleans.

Chicoine, like Chenier, was a genealogy hobbyist, and she believed she had found records that placed Chenier's great-great-grandfather, Firmin Jacobs, and his parents at the school the sisters had founded in Grand Coteau, Louisiana, in 1821. As enslaved laborers. Owned by the sisters.

"It was bittersweet," Chenier told Global Sisters Report, recalling the moment she read the email.

On the one hand, Chicoine was offering Chenier something few black Americans have access to and what many black genealogists can only dream of: factual information about her enslaved ancestors — their names, when and where they were born and when and where they died. But on the other hand, it forced Chenier to think about her ancestors' pain in a new way.

"It's one thing when you're doing research, and you don't have anything really concrete to remind you of the impact it must have had on these relatives of yours," she said. But, for instance, one of the pieces of information Chicoine was able to provide for Chenier was an entry from the sisters' house journal noting the death of Chenier's great-great-great-grandmother, Marie Louise Phillips Jacobs. The journal writer refers to Jacobs as "one of our best slaves."

"It was unusual to hear a relative of mine spoken about as if she were property," Chenier said. "Even though they spoke highly of her, it was still clear that she was owned. That kind of thing just brings it home."

Chenier wasn't the only person to get an email from Chicoine. In 2016,  the United States and Canadian province of the Society of the Sacred Heart had convened a Committee on Slavery, Accountability and Reconciliation, of which Chicoine was a part, and gave it a two-year mandate to "recover the story of slavery in our early days in this country" and to "commit to truth, healing and reconcilition for a better future."

Tracking down the descendants of the more than 150 black people whose forced labor was used to build and maintain Sacred Heart properties in Louisiana and Missouri quickly became part of the mission. It wasn't easy, but the sisters had something few other slaveholders ever bothered to keep: detailed records. In this case, sacramental records. 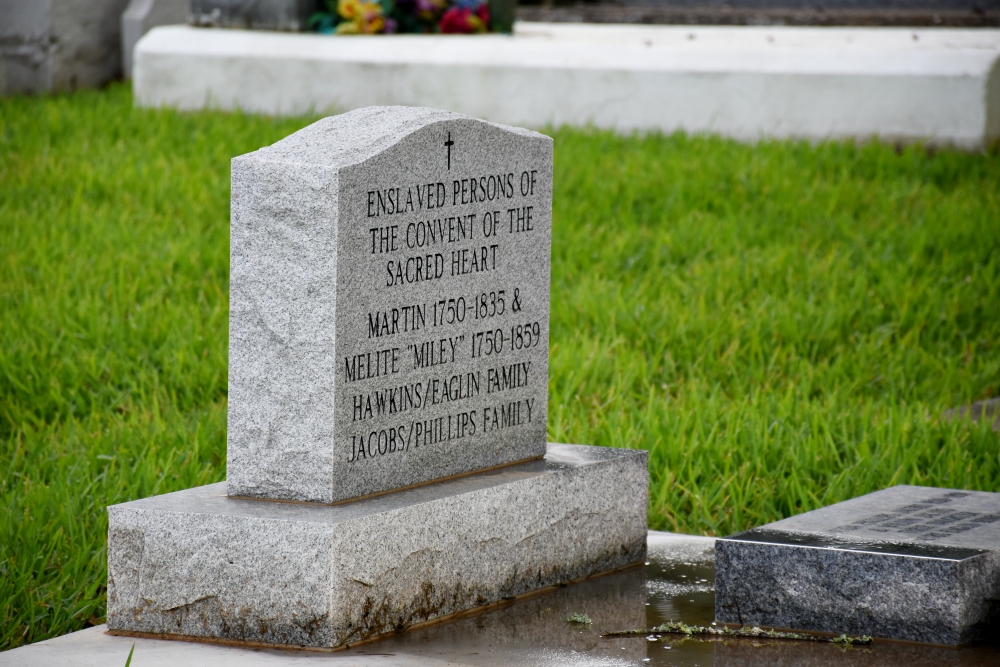 One of the newly installed gravestones for enslaved people buried at the parish cemetery in Grand Coteau, Louisiana (Society of the Sacred Heart/Linda Behrens)

"It was an assumed thing that Catholic slave owners were to have their enslaved people baptized and married sacramentally," said Sacred Heart Sr. Carolyn Osiek, chair of the Committee on Slavery, Accountability and Reconciliation and the community's archivist. And these sacramental records, she said, have been a gold mine for the sisters' genealogical research.

The sisters started at Grand Coteau. Chicoine and fellow Sacred Heart Sr. Irma Dillard — one of three black American Sacred Heart sisters and the only one to serve on the slavery committee — pored over the handwritten records, many in faded or bleeding ink, some in pencil. They then cross-referenced the sacramental records with work contracts, the house journal and financial records, which were written in French.

In the end, Chicoine was able to put together a family tree that she then posted on Ancestry.com.

"Well, that was like candy," she said. "Some people called me immediately because it got them past their brick wall. That's how I found most of the descendants." Other descendants, like Chenier, Chicoine found because they were doing research on the same families. She'd send them an email saying she had a name she thought matched someone in their tree and could help them fill in some pre-Emancipation blanks.

Last fall, a group of about 40 descendants (out of possible "hundreds," Chicoine said, given that convent files show evidence of as many as 70 persons enslaved there) gathered in Grand Coteau to honor their newly discovered ancestors. Dillard points out that it was the descendants rather than the sisters who planned the event, and that they were explicit when it came to their desires. "They wanted dirt from Grand Coteau and the names," she said. Which is what they got.

The apex of the event was a calling out of the names of every known enslaved person the sisters had owned in Grand Coteau — a ceremony adapted from Pearl Cleage's poem "We Speak Your Names," written for an event Oprah hosted in 2005 to celebrate the resilience of black women in the United States. Engraved headstones were also installed in the parish cemetery where some of the enslaved people are known to be buried, albeit without markers. Descendants were also sent home with jars of dirt from the property.

"What can I say? It was beautiful," Dillard said. The goal now is to move forward. The Sacred Heart sisters are currently working on locating descendants from their other properties. They are also focused on channeling their congregational identity as educators to help dismantle systemic racism and white supremacy, which might be more of an uphill battle.

With splashy write-ups in publications like The New York Times, it may seem like it's the trendy new thing for religious communities to wake up to racial injustice and then make public apologies for their past. But it's not sudden "wokeness," Dillard said. It's fear.

For instance, the Society of the Sacred Heart's slaveholding past has been public knowledge since at least 1957. Dillard loves her sisters, she said, but she's convinced without the fallout from the 2016 revelation that the Jesuits had enslaved people at Georgetown University, most other Catholic institutions — her congregation included — would still be doing nothing.

"When the Jesuits got busted out, everybody got scared because they were going to be next," she said with a hearty chuckle. "We wouldn't have done anything. Why would we have? We hadn't done anything since …" — she pauses — "... slavery." 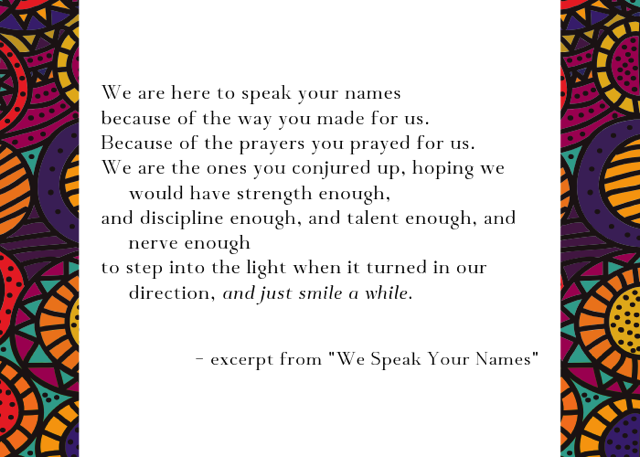 They had other opportunities. In 2000, the Sisters of Charity of Nazareth, the Sisters of Loretto and the Dominicans of St. Catharine (now part of the Dominican Sisters of Peace) gathered to make a formal apology for their foremothers' use of slave labor in Kentucky. Furthermore, as historian Shannen Dee Williams recently pointed out, black Catholics have been talking about the issue for years.

Osiek agrees with Dillard that it can be hard for many white people, including women religious, to truly examine the ways they are complicit in white supremacy.

"I think those of us who are not descendants of enslaved people really fear this," she said. "I'm a descendant of German farmers. My people did not enslave people but, still, there's a collective identity of white privilege. And becoming aware of that can be a frightening experience."

But it's work that must be done. Meanwhile, the Sacred Heart sisters' genealogical research is giving hundreds of black Americans the gift of knowing where they come from, of knowing who their people are.

Chenier said that when she learns about her ancestors it brings them to life and she can feel their energy. "It gives you more purpose, it gives you an understanding of how you may have come," she said. "It allows you to connect with someone that you have never met and never will meet — except maybe in heaven somewhere." 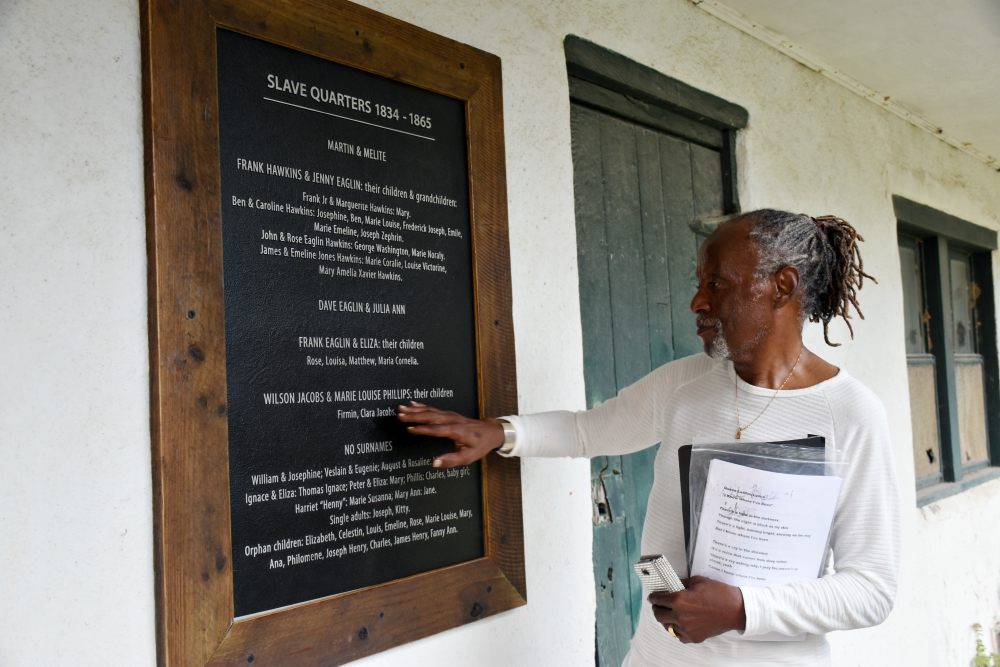 During the 2018 memorial event, Dorson William Purdy Jr., one of the Grand Coteau, Louisiana, descendants, looks at a newly installed plaque on the former slave quarters, which remain on the sisters' property. (Society of the Sacred Heart/Linda Behrens)

Nuns on the Bus 2018 travelogue: A matter of life or death

Every person killed, we remember them all