A tour for We the People, Nuns on the Bus stirs voters 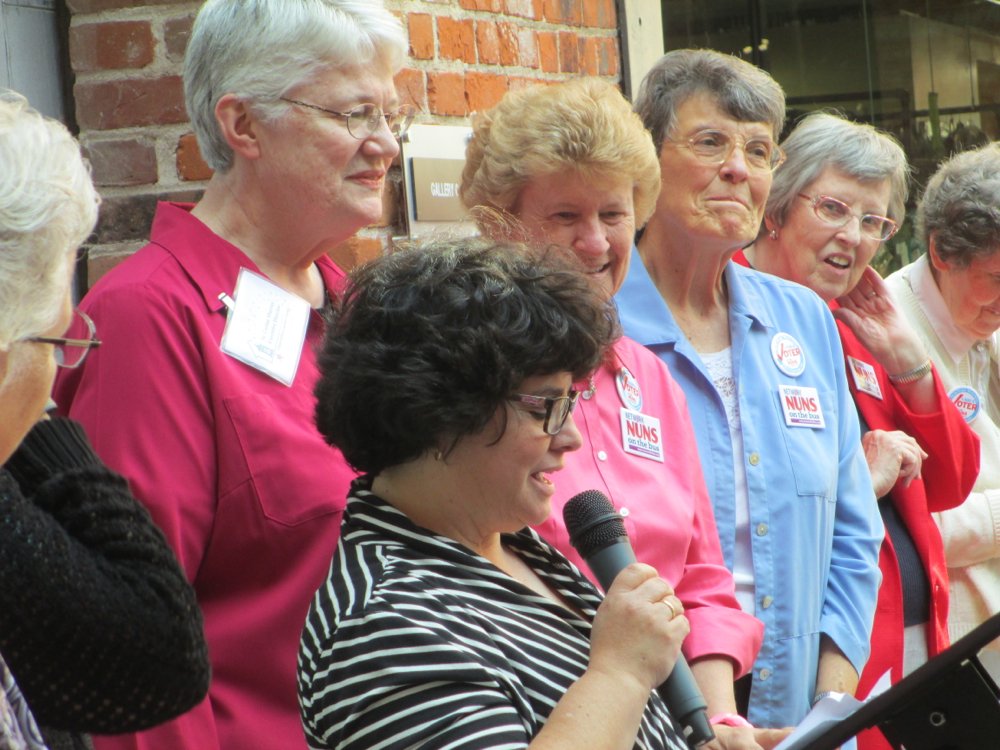 Social Service Sr. Simone Campbell never fails to cause a stir. As executive director of the Catholic social justice lobby NETWORK, Campbell is spearheading a third Nuns on the Bus tour, and from a strong kickoff at the steps of the Iowa State Capitol in Des Moines, the “We the People, We the Voters” tour has been rousing what Campbell and her colleagues are calling the “100%.”

“There is an urgent need for people to reclaim our democracy. Simply put, it is being threatened by big money,” Campbell stated. “It has been clear for years that wealth and income disparities in our nation have grown exponentially. Our election campaigns are now awash with big money.”

The first Nuns on the Bus tour in 2012 focused on enacting a federal budget that supported families and those on the economic margins. The 2013 tour emphasized the need for comprehensive immigration reform.

“This time, we are focused directly on the power of the people. This new trip is all about how we, the community of voters, have the power to create justice ourselves. It’s all about democracy. We the people, we the voters,” Campbell said.

Global Sisters Report had a firsthand view of the tour’s first leg through Iowa. My Franciscan community is based in Clinton, Iowa, and I was able to join nine other Iowa women religious riding the bus through the state.

I blogged while I was on board. Here is one of my observations: “Over and over again as we travel, we hear the concern about who is being left out, left behind in our country. Concern over income inequality comes up time and time again. And the influence of big money in the political process. It’s about who is not at the table.”

Vice President Joe Biden, the main speaker at the kickoff rally, spoke about the increasing income gap and the need for higher wages, immigration reform, and the rising number of restrictions on voting.

According to Biden, 81 pieces of legislation have been introduced in the states curtailing voting rights. Focusing most of his remarks on the topic of the shrinking middle class, he declared, “Things are out of whack! We aren’t asking the right questions.”

He emphasized that “it’s time to stand up and ask questions” about why this is happening.

During his speech, Biden praised the sisters, telling them not to underestimate the power that is generated when their conscience and passion come together over things that matter.

Biden may have gotten the lion’s share of media attention, nationally and abroad, but off the podium, he shared lunch with the Iowa “Nuns on the Bus” sisters for more than 90 minutes. He talked about the intersection of his faith and his role as a public servant, the history of Catholicism, his meetings with popes, and how influential sisters have been in his life.

So far, Nuns on the Bus has been through Iowa, Minnesota, Illinois, Michigan, Kentucky, West Virginia and North Carolina, making stops in cities like Sioux City, Cedar Rapids, Mankato, Duluth, Chicago, Flint Township, Detroit, Louisville, Raleigh and Charlotte. Next, it heads to into Louisiana, Georgia and Colorado, racking up a total of 75 events in 36 cities along the 5,252-mile route before the tour concludes, scheduled Oct. 20.

At each stop, Campbell introduces the purpose of the trip. “We need all of us at the table, not just the 1 percent or just the 98 percent. We need 100 percent at the table. We need those without and those who are rich. We need each other in order to figure out the way forward,” she says.

But then she adds, “If you have lots of money, we ask that you leave your money bags at the door. You can’t buy the table. It belongs to we the people.”

A different group of sisters rides along through each state. They visit local organizations that provide social services, they talk to people about their concerns, and they hit the streets to conduct voter registration drives and encourage people to vote.

At each stop, people were asked to pledge to be a voter and then invited to sign the bus. By the time the Iowa leg of the journey was over, the bus had so many signatures that the sisters were speculating about the need for a ladder as the bus traveled through the remaining states.

Uplifted by the people they met, the sisters riding on the bus used words like “exhilarating, energizing and hopeful” to describe their experience.

Other sisters have been sharing their experiences from the bus as they travel. Their accounts are posted on NETWORK’s website.

Immaculate Heart of Mary Sr. Nancy Sylvester, writing after the town hall in Traverse City, Mich., recounted, “Their concerns echoed those we heard among the people of Lansing and Kalamazoo: wealth disparity, homelessness, an inadequate minimum wage, climate change, need for caring and personal responsibility.”

In every city the sisters have visited so far – putting in long days that start around 7 a.m. and end around 11 p.m. with overnight stops – they are reporting optimism about voters’ energy.

Following a town hall meeting in Sioux City, Iowa, Presentation Sr. Richelle Friedman wrote from the bus, “The lively discussion that permeated the room centered on the challenging issues that face our nation — from excessive spending on war, the environment, the safety net, living wages, to the empowerment of women. I had a sense of hope as individuals shared in large group their passion around being engaged and bringing about change.”

Reflecting on her experience of the town hall in St. Cloud, Minn., Benedictine Sr. Eunice Antony wrote, “The group was very welcoming, animated and participative. Some general concerns included big money, child abuse in many forms, fear, climate abuse, and apathy. A lot of voter pledge cards were collected and a commitment to get out the vote was strong!”

Campbell summed up the experience of Nuns on the Bus Sept. 21 in her remarks after receiving the Pacem in Terris Peace and Freedom Award, which the Davenport, Iowa, diocese has been bestowing since 1964. “The amazing thing about the bus trip is that for some miracle reason I do not understand, it’s become a magnet for people to come to sign, to commit themselves to making a difference, to speaking out and knowing we’re in this together. It’s because hope is a communal virtue,” she said.

Sylvester concurred. “What cannot be captured that well in words is the hope that the ‘Nuns on the Bus’ engenders among those gathered,” she said. “There is something magical about that bus. When people sign their names to the bus, they know they are joining with so many others who believe in democracy and are willing even with the current dysfunction of our political system to commit themselves to strengthen our government by the people, with the people and for the people.”

A tour for We the People, Nuns on the Bus stirs voters