Francis praises US women religious, but is non-specific on sexual abuse

by Joshua J. McElwee
Religious Life
This article appears in the Francis in the United States feature series. View the full series. 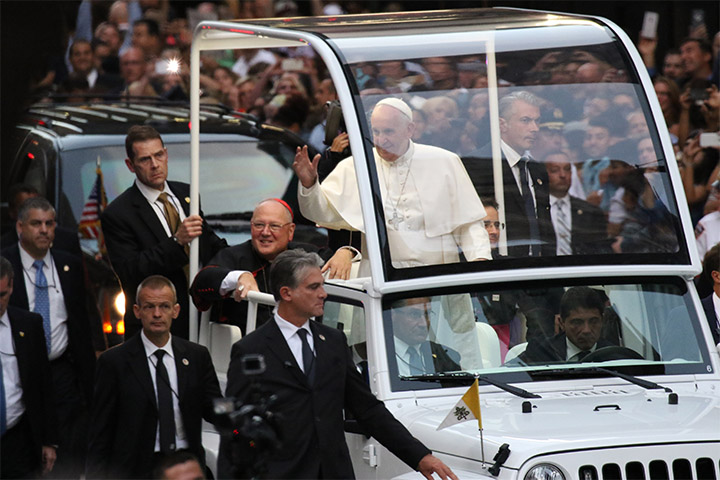 Pope Francis waves to the crowds as he approaches St. Patrick's Cathedral in New York City Sept. 24. Seated next to him is Cardinal Timothy M. Dolan of New York. (CNS photo/Gregory A. Shemitz)

New York, N.Y. — Pope Francis has poignantly thanked U.S. Catholic women religious — until recently the subject of two controversial Vatican investigations — for their work in building and maintaining the church throughout the country.

But the pontiff has also made his second statement in as many days that only obliquely mentions the clergy sexual abuse crisis, and refers to the shame brought upon priests and religious due to the perpetrators but not the pain faced by survivors.

In a prayer service with priests and members of religious orders at St. Patrick's Cathedral here Thursday evening, Francis said he wanted to express his "esteem and gratitude" to women religious of the United States "in a special way."

"What would the church be without you?" he asked the women religious.

Religious Life | Francis praises US women religious, but is non-specific on sexual abuse

'Nuns and Nones': An energizing and hopeful story

Sister to sister: Religious reflect on who inspired them to follow God's call