Thousands of Catholics in the United States rallied to support the Leadership Conference of Women Religious when it came under scrutiny from the Vatican's Congregation for the Doctrine of the Faith from 2009 to 2015. In 2012, the doctrinal congregation required reforms that challenged the organization whose members are leaders of about 80 percent of the women religious congregations in the country and held wider implications for the laity and the role of women within the church.

In a newly released book, former presidents of LCWR, members of the organization's executive staff and members of a lay support group share their experiences and insights from this critical moment in their history.

However Long the Night: Making Meaning in a Time of Crisis tells how the sisters navigated the organization through the doctrinal assessment to an amicable resolution with the Vatican in April 2015. The 10 essays detail approaches and practices used, such as communal discernment, relationship-building, a commitment to nonviolence, lessons in humility, governance methods adopted by congregations after the Second Vatican Council, and a lot of prayer.

The final chapter, written by three members of Solidarity with Sisters, a group formed by members of the laity to support sisters in 2012, conveys what they learned from the sisters in moving from a reaction "immersed in our confrontational culture" to "discovering another way of being."

This is not a "tell-all," but rather a "product of reflection over time," write St. Joseph Sr. Janet Mock, LCWR executive director from 2011 to 2014, and Immaculate Heart of Mary Sr. Annmarie Sanders, communications director.

The genesis of the book was a desire to "provide spiritual grounding, useful information and perhaps some inspiration and hope" to those working through conflict, confrontation or impasse in personal, professional or organizational settings, Mock and Sanders write. Each chapter includes questions for reflection and dialogue. A step-by-step guide for a 90-minute communal discernment is included as an appendix.

LCWR leadership wasn't sure whether to write such a book initially, Sanders told GSR. At a December 2015 meeting, the idea was discussed, but no clear direction determined. A year later, after the divisive U.S. presidential campaign and election and increasing polarization in the country, they came to a different conclusion.

"In light of what our society was experiencing, we looked at what the organization had learned and felt that those learnings could be helpful to the country," Sanders said. "We felt a call to share our insights with the wider world."

They gave themselves eight months to write and share the chapters. At a five-day retreat in September 2017, they met in small groups and then as a whole to complete the book, which was self-published in March.

Each chapter deals with the facts and chronology of the doctrinal assessment, but through a different lens, exploring themes such as personal and institutional integrity for an organization during a time of crisis; understanding the roots of perceptions and stereotypes that can lead to polarization and a "cultural chasm"; how to responsibly use influence and manage the media spotlight; and how leaders and organization members can find renewal and personal growth even in pressure-filled times.

In March 2009, LCWR received a letter from the doctrinal congregation announcing a decision to conduct a doctrinal assessment, expressing concern over some of its speakers at its national assemblies who "espouse erroneous theological positions." The review expanded a few months later to include all LCWR programs and resources.

While LCWR leadership immediately communicated with the board, past presidents, theologians, canonists and other consultants, "our first response was to enter into a contemplative discernment that would help us set the stage for a respectful and honest meeting with church authorities," writes Sr. Marlene Weisenbeck of the Franciscan Sisters of Perpetual Adoration, who was president of LCWR in 2009.

LCWR provided the materials the Vatican requested, copies of publications and speeches at LCWR assemblies, in 2010. Through the following year, the organization kept open channels of communication with the doctrinal congregation while adhering to an agreement to keep the process confidential.

On April 18, 2012, LCWR officers met in Rome for their scheduled meeting with the doctrinal congregation, where they were given a mandate for reform. LCWR would have to revise its statutes and submit all speakers, programs and plans for review for up to five years. Seattle Archbishop Peter Sartain was appointed to oversee the implementation of the mandate, assisted by two other bishops.

Unknown to LCWR leadership, a copy of the mandate was posted on the website of the U.S. Conference of Catholic Bishops. Sanders writes of getting a phone call from an Associated Press reporter as she was boarding a flight from San Francisco to Baltimore, asking for a reaction to the mandate.

By the time she landed, Sanders writes, she had messages from multiple national and international media outlets. LCWR leadership had no response: They were still trying to absorb what had happened and formulate a reaction.

Along with the Vatican's separate apostolic visitation of women religious congregations in the U.S., which also began in 2009, the doctrinal congregation's action touched a nerve among the laity. Rallies, internet campaigns and public statements of support by other organizations ensued. Nearly 100,000 people sent letters, emails or signed petitions, some sent to local bishops or the three bishops appointed to oversee the organization, in support of LCWR.

"What was happening to women religious seemed to reflect and validate the pain experienced by much of the laity," writes Franciscan Sr. Pat Farrell, who was president of LCWR in 2011. LCWR "was engaged in a clash with church authorities which touched into the deep concerns of a much broader public, though the CDF saw it as very specific and limited to LCWR itself."

"This polarization in the U.S. Catholic Church was our context, one we felt keenly and one which mattered a great deal to us," Farrell writes. "As women religious, our love for the church, though questioned by some, was deep and undeniable for us ... To feel apart from or at odds with the institutional church was painful and unacceptable."

For six weeks, LCWR's leadership said nothing publicly about the mandate and asked its members to refrain from saying anything until the board met in May 2012. At its assembly in August 2012, all members who wanted to speak about the mandate were allowed to. But crucial to determining a way forward was the process of communal contemplation and discernment, repeatedly cited throughout the book.

"Ultimately, we were able to see together with the eyes of our common heart more than any of us could have seen alone," Farrell writes.

In multiple chapters, the sisters discuss the pain the mandate caused individually and collectively.

Misperceptions had built up over years, the sisters found. Immaculate Heart of Mary Sr. Sharon Holland, president of LCWR in 2014 and a canon lawyer who had served on the staff at the Vatican's Congregation for Institutes of Consecrated Life and Societies of Apostolic Life, writes of a "moment of critical insight" in a 2014 meeting between LCWR and the doctrinal congregation "in which a CDF official expressed regret that certain perceptions has become 'institutionalized.' ''

While the mandate was directed at LCWR, it also reflected the larger conflict within the church over the vision of Vatican II, several sections of the book note, particularly the chapter by St. Joseph Sr. Carol Zinn, president of LWCR in 2013.

LCWR had "embraced the renewal of religious life with vigor, vitality and vulnerability" within the context of Vatican II, she writes. "The role of the laity, the relationship between the ordained and the laity, and the contribution of women in the church became a graced point of conversation in the renewal work."

Yet with that full undertaking of the Vatican II renewal efforts, LCWR as a group of women religious leaders seemed "to contribute to the current conflict in the Vatican," she writes.

The widespread reaction to the mandate and support of LCWR by the laity, other Catholic organizations and women's religious congregations around the world indicated "there was something quite profound at stake in this journey," she writes. "We felt the hope of wanting our church to grow into the vision of Vatican II shared by so many. And we touched the deep ache experienced by so many in the absence of such a vision becoming reality."

In its public statement when the mandate concluded in 2015, LCWR said it hoped that the assessment and mandate "will lead to the creation of additional spaces within the Catholic Church where the church leadership and membership can speak together regularly about the critical matters before all of us."

However Long the Night presents methods that can be used for a communal, contemplative approach to such conversations within church and other organizations. That is already happening with several members of the Solidarity with Sisters group, who write in their chapter that they have adopted contemplative practices in their workplaces.

One member says creating space for quiet contemplation is helpful for teams making difficult decisions. Another says LCWR's communal discernment and collective decision-making "are 'best practices' that could be translated for wide use in organizations."

In addition to providing insights into how LCWR reacted to the crisis and lessons for other organizations, However Long the Night is also a story of a spiritual journey that brought lessons in humility and unexpected blessings for the organization, its leaders, members and supporters.

"We learned that even when unjustly accused," writes Dominican Sr. Mary Hughes, LCWR president in 2010, "we could trust God to bring us through the night, however long." 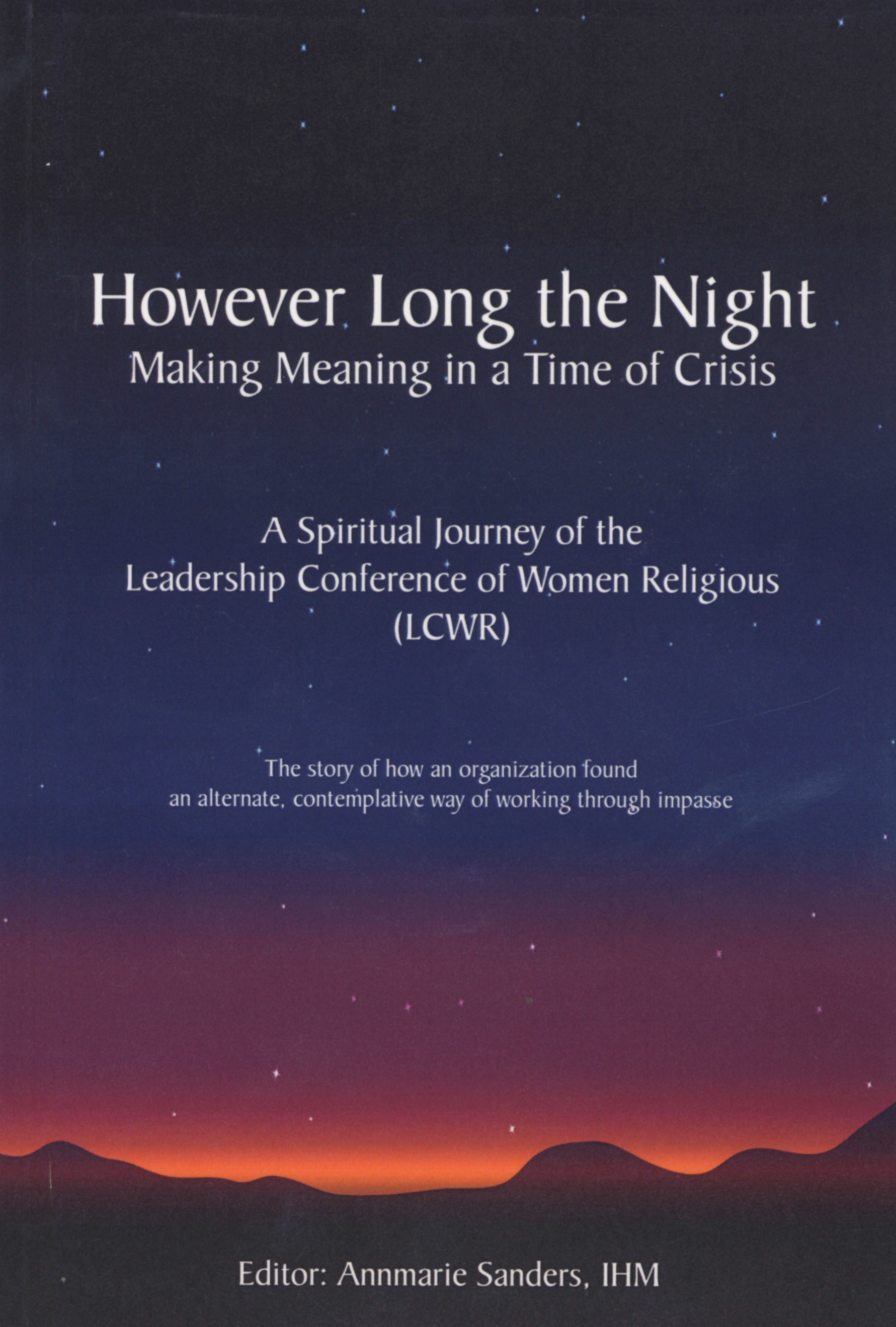