By March 8, International Women's Day, more than 160 women had arrived on the wintry campus of St. Catherine University here for the first National Catholic Sisters Week.

It wasn't just the temperature rising into the 30s that warmed things up as college students and sisters crisscrossed the snow-covered quad from the Coeur de Catherine campus center to Mendel Hall classrooms for workshops on social media and an overview of a planned oral history project dedicated to bringing sisters' stories and the reality of religious life to a new generation. Talk flowed easily among peers and between generations.

"The overall feel of the weekend was such a joyous environment. Everyone seemed to have that in their heart. So open and willing to talk," said Villanova University junior Megan Hopkins.

"I love being with other people who are on the same God quest," said St. Joseph Sr. Betsy Conway, director of campus ministry at Regis College in Weston, Mass.

"NCSW was an amazing weekend. Having the opportunity to meet other college students who were discerning 'What next?' was beautiful, whether that was single, married or religious life," said Enedina Maya, a student at the College of St. Rose in Albany, N.Y.

Those are exactly the kind of comments Sr. Rosemarie Nassif, director of the Conrad N. Hilton Foundation's Catholic Sisters Initiative, wants to hear. The foundation granted St. Catherine University $3.3 million over three years to establish the SisterStory project to bring the stories of sisters to a wider audience – to "celebrate, to inspire, and to ignite," she said. (The National Catholic Reporter Publishing Co. also received a grant from the Conrad N. Hilton Foundation to fund reporting on women religious.)

"We at the Hilton Foundation have this hypothesis," said Nassif, a School Sister of Notre Dame.* "There are a declining number of sisters in North America. The reality that causes that is complex. It has sociological reality, religious reality, probably a Catholic reality."

One cause, she said, is that people, especially young people, don't know sisters or don't know about sisters' lives.

"I think that is so true," said Caitlin Dickinson, a senior at Felician College in New Jersey. She said she is seriously considering a religious vocation. "What kick-started my search was my friend Sister Clare. So building relationships, I think, is the most important thing that can be done here."

And sure enough, email addresses, cellphone numbers and business cards were exchanged. The dining room buzzed with table talk about justice topics and ministry anecdotes. Students stayed up late talking with peers who understand the importance of faith in their lives.

The weekend also presented stories in a more formal way and offered workshops on best communication practices for vocation directors; Social Media 101 and the demographics of 20-somethings; and the proper way to carry out an oral history interview.

Four sisters' stories were shared prominently during a one-hour taping of the Moth Radio Hour hosted by journalist Soledad O'Brien. Each sister was asked to address the theme "Sister Stories: How Did I Know?" – in other words, how did I know religious life was for me?

Under a spotlight in a dark auditorium, Sr. Carolyn Martin, a Little Sister of the Poor, stood at a microphone at center stage. She told the story of how her plans to marry her boyfriend turned on a dime after she spent a chance afternoon with the Little Sisters* at one of their homes for elderly poor. Witnessing the care a sister bestowed on a dying man wowed her – and changed the course of her life.

"Time was touching eternity," she said. "God had swept me off my feet with this greater love. I've never regretted saying yes to God's beautiful plan for my life."

Later, Immaculate Heart of Mary Sr. Julie Vieira shared her much more deliberate path to sisterhood, fostered step by step: a movie about sisters martyred in El Salvador, an invitation to dinner here, a weekend retreat there, until she realized that sisterhood, a community of support, was what she wanted for life.

A co-founder of the A Nun's Life website, blog and the "Ask Sister" podcast, Vieira said her ministry is about debunking cultural stereotypes and caricatures of sisters and "helping tell our own story. It's about 'humaning' the experience of being a nun."

After the weekend, she, Immaculate Heart of Mary Sr. Maxine Kollasch and their office manager, Jane Aseltyne, were headed to Dubuque, Iowa, a stop on their Motherhouse Road Trip tour. Everywhere they go, they record nuns talking about their work and their lives.

A Nun's Life has more than 4,000 Facebook friends and almost 3,500 Twitter followers, and the group knows its way around a hashtag, too. In other words, it's all about sharing stories.

Sitting on a gold mine

Vocation directors need to know all this in order to interest new prospects in their communities. The average age of sisters in the U.S. is 74. Yet St. Joseph Sr. Jeanne Marie Gocha said she is tired of hearing the same old lament about how numbers are down.

So Gocha was excited to hear at a communications session targeted to vocation directors that she and her counterparts are "sitting on gold mines" of stories.

More importantly, she said she now knows that young people appreciate and respect tales of women's lives in religious community and their rich mix of ministries, whether serving the poorest of the poor internationally, caring for the dying, fighting for social justice, leading hospitals and universities, or even ministering to circus performers.

"To tell the story to someone who's younger gives both people life," Gocha said. She said she is eager to share with her sisters back home in Albany, N.Y., the comments she heard: " 'I just think nuns are so cool.' These are words older sisters need to hear."

"We are a story-based religion – the Old Testament, parables, the Gospels. We're still telling stories about how God has entered our lives," she said.

The reality, however, is that unless older sisters' stories are deliberately collected and shared, they and the aspect of women's history they represent will be lost for good. So creating an oral history archive is a second major initiative of SisterStory, said Molly Hazelton, who with Dominican Sr. Mary Soher is co-executive director of SisterStory.

At least 100 sisters from around the country will be matched with student interviewers trained in the methodology, technical skills and interview techniques to craft videotaped and audiotaped oral histories – sisters' stories in their own words. The archive will live at St. Catherine University and eventually on the Web. St. Catherine students are piloting the project and will train students elsewhere next year.

Before landing at St. Catherine University last fall as a freshman, Briana Berner, 19, of Fairbanks, Alaska, had never met a Catholic sister.

She met her first sister, a French professor, at a welcome picnic hosted by the order that founded the university, the Sisters of St. Joseph of Carondelet. She enrolled in a required class, "The Reflective Woman," that teaches the history of the order and the school. And she became friends with Sr. Paulette Pass, a School Sister of Notre Dame, 76, when the two were paired in a project to begin a video and audio archive of sisters' stories.

All of this has shaped Berner's first year of college in a way she'd never expected. "It's a whirlwind of being blown away over and over at how profoundly beautiful sisters are and their contribution to our nation and world."

Berner isn't likely to become a sister – she isn't Catholic – but she said getting to know Sister Paulette has been enriching and enlightening.

Pass, meanwhile, is a classic example of someone who knew sisters because they taught her in school, and she decided to join up with them when the time came.

Each woman took a chance on signing up for the oral history project – and each says she has benefited tremendously.

"The process has been wonderful, almost like a review of life," Pass said. "She is a good listener."

Pass spent eight years teaching women in highland Kenya who would not otherwise have had the chance for a high school education, and she had a role in inviting some to join the community. She said reflecting on her life and work has reminded her that her life has indeed touched many others.

"My experience has been not only for myself, but for so many other people. This process is as well. You can bring up water over and over. I think it will water a whole lot of people's lives," Pass said.

In addition to preserving histories and hosting the annual National Catholic Sisters Week, SisterStory's three other initiatives will roll out during the next three years, Hazelton said. The group will use the oral histories to create a curriculum to teach students from middle school to college about sisters' roles in women's history, a documentary with the local public television station, and a digital resource hub where all the material will live.

*An earlier version of this story listed an incorrect religious order.

[Kris Berggren is a freelance writer based in Minneapolis-St. Paul, Minn.]

Editor's Note: The National Catholic Reporter is embarking on a groundbreaking project to give greater voice to sisters around the world. To learn more about this project or sign up for email alerts visit, http://ncronline.org/sisters. 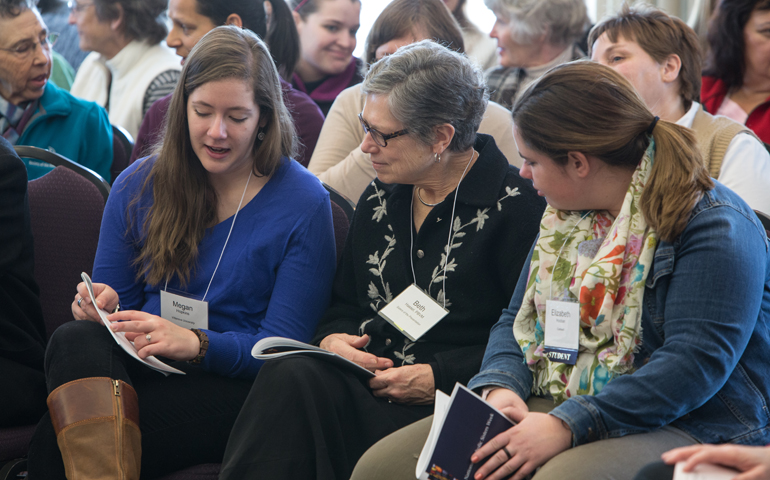 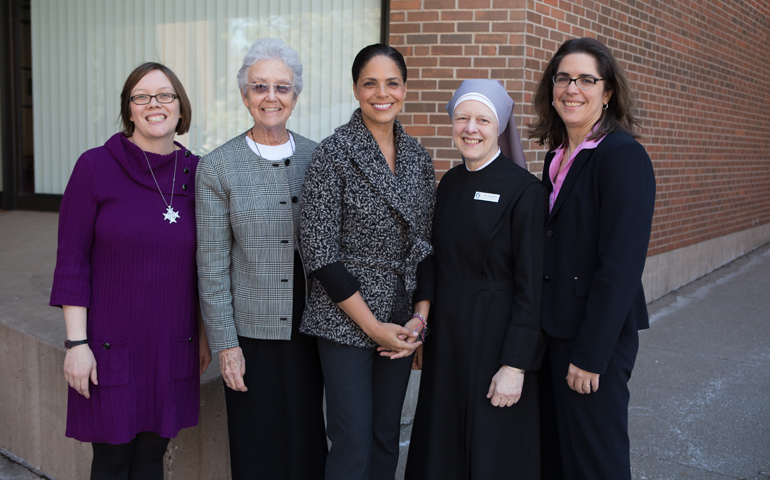 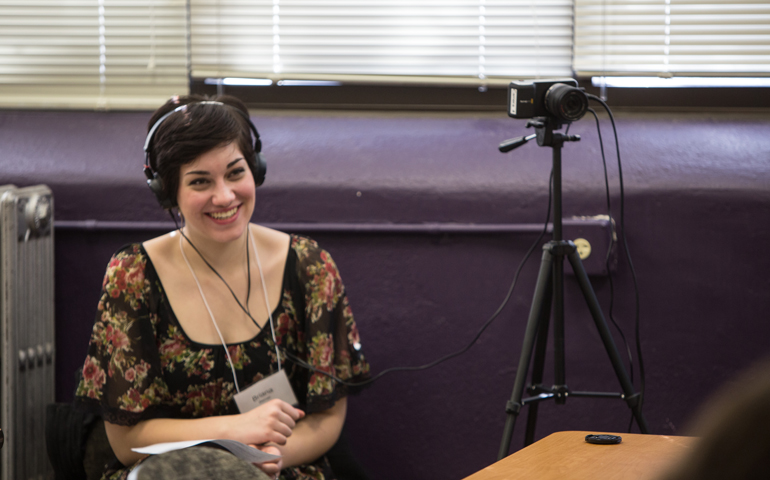