• Go here on NCRonline.org to comment on any of GSR's #LCWR2015 stories

This article appears in the LCWR 2015 feature series. View the full series. 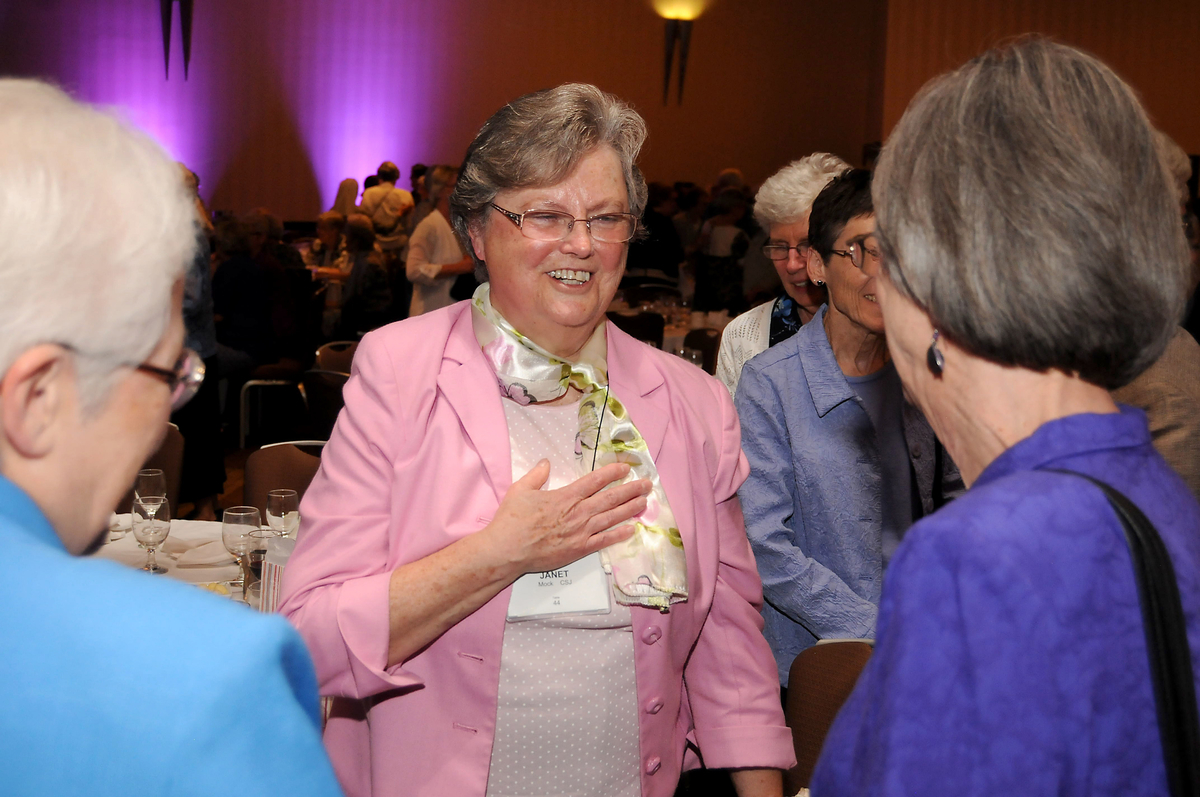 Sr. Janet Mock is all smiles after receiving the Outstanding Leadership Award at the annual assembly of the Leadership Conference of Women Religious at the Hyatt Regency Hotel in Houston,Texas, Friday, Aug. 14, 2015. (GSR photo / Dave Rossman)

Houston, Texas — Sr. Janet Mock said it is not she, but those around her who deserve accolades.

“I have no illusions — everything I learned about leadership, I learned from you and your predecessors,” she told the Leadership Conference of Women Religious’ annual assembly after accepting the group’s Outstanding Leadership Award at their banquet Friday evening.

LCWR officials said Mock not only provided extraordinary leadership as their executive director, but did it “through one of the conference’s most profound and transformative challenges — the doctrinal assessment of LCWR by the Congregation for the Doctrine of the Faith and its subsequent mandate.”

“In some ways, these last three years have been some of the most challenging and blessed of our lives,” she said.

Among those blessings was working with Seattle Archbishop J. Peter Sartain, the Vatican’s bishop delegate appointed to oversee the reforms demanded of LCWR. The doctrinal congregation had alleged that certain LCWR presentations “undermine the revealed doctrines of the Holy Trinity, the divinity of Christ, and the inspiration of Sacred Scripture.”

Earlier in the day, Mock said the investigation had “come from a place of corruption,” but Sartain helped bridge the divide between women religious and church officials. 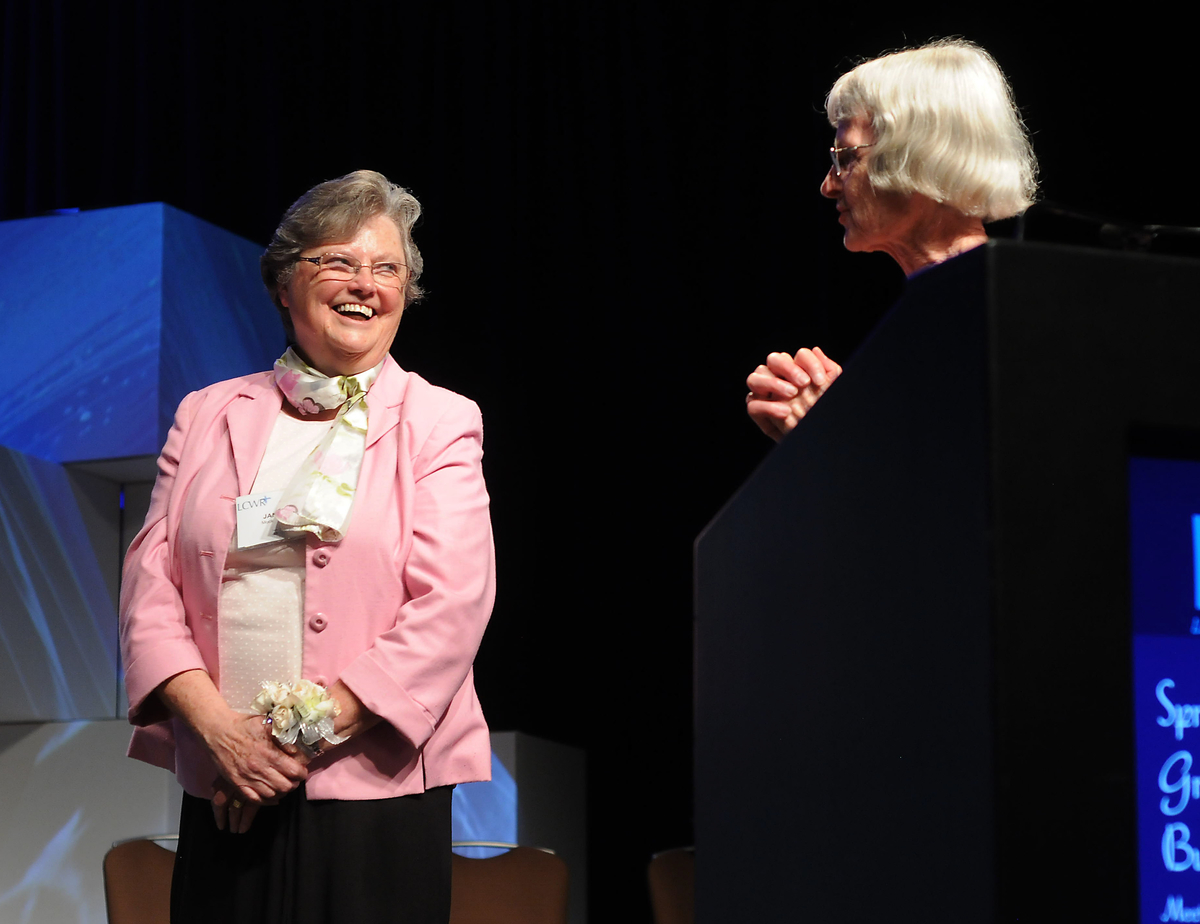 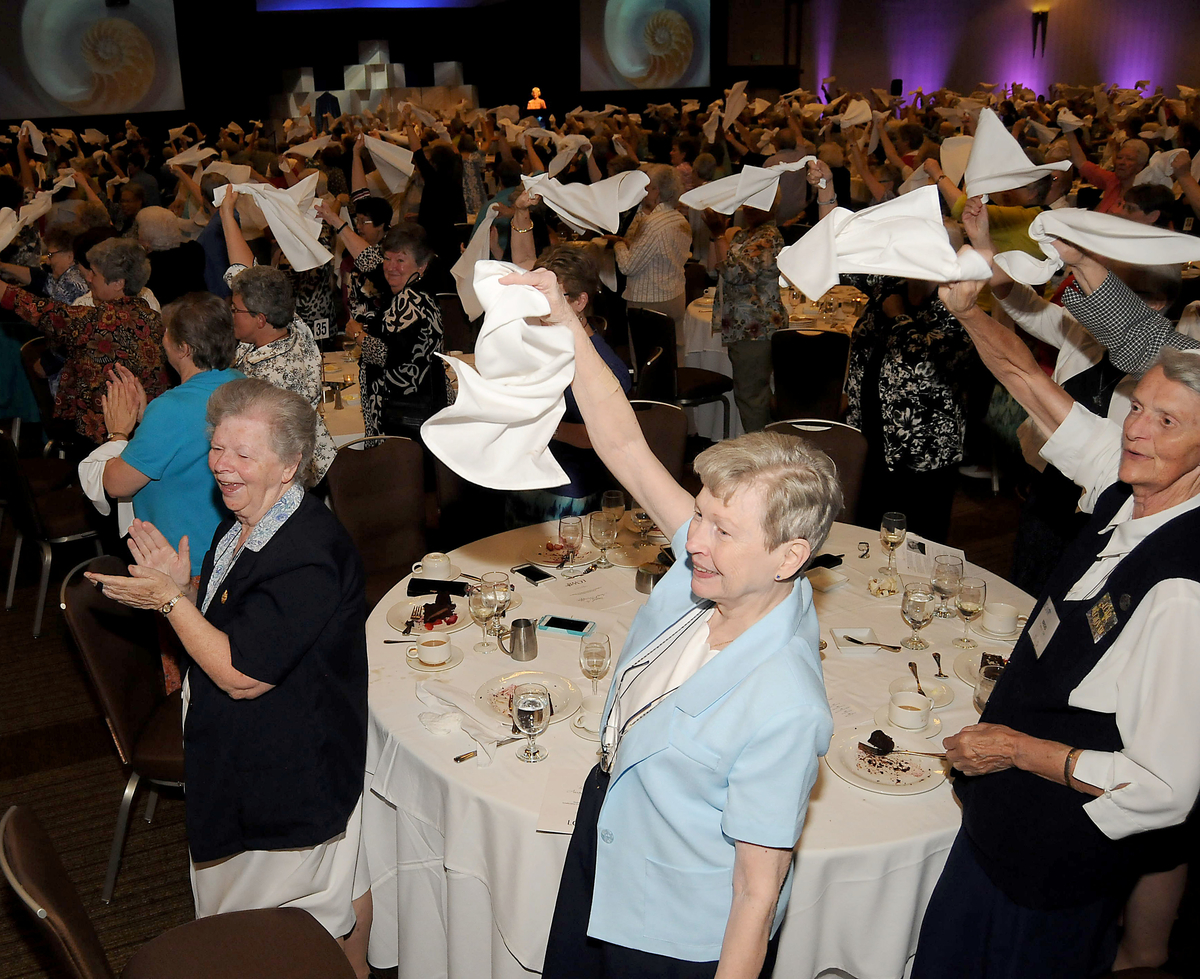 Srs. Carmel O'Malley, Barbara Anne Osterhaus and Brigid Cummins show their appreciation for the servers and and staff during the concluding banquet for the LCWR annual assembly Friday evening. (GSR photo / Dave Rossman)

“When I think of integrity, Archbishop Sartain will always come to mind,” Mock said. “He’s a man of deep prayer and openness and thankfully, he has a great sense of humor.”

Sartain was set to attend the banquet, but his flight was canceled. So he was connected to the ballroom by telephone, and members thanked him for supporting women religious and LCWR, giving him a standing ovation. Officials described the gift they plan to give him in person: a cross called the Cross of Life. Sartain said working with them had been a privilege.

During a video about Mock’s life and talents, LCWR past president Sharon Holland said Mock has a gift for deflecting compliments. Mock displayed that in talking about the award, which she called an “immeasurable and humbling honor.”

“What we have done, we have done together, so this award belongs to all of you, and I am honored to be its steward,” Mock said. “All of you share this award.”

Mock entered the Sisters of St. Joseph of Baden, Pennsylvania, in 1955, taking the name Sister Generosa. She spent 14 years as an elementary school teacher and served as director of candidates, novices and temporary professes sisters for her community for 10 years. She was superior general of her congregation and worked in community outreach for Carlow Hill College, providing education for African-American women, largely single mothers living in poverty. She also helped the college create its Institute on Racism.

Mock served as executive director of the Religious Formation Conference and director of the Institute for Leadership and Catholic Mission at Washington Theological Union, where she worked with LCWR to establish the group’s leadership education process.

“She’s an example to follow for all of us,” she said.

Religious Life | Sr. Janet Mock: 'Everything I learned about leadership, I learned from you'

Establishing contemplative communities in the US: The early history