A controversial three-year program of Vatican oversight of the main leadership group of U.S. Catholic sisters has come to a curt and unexpected end, with the sisters and the church’s doctrinal office announcing that the goal of the oversight “has been accomplished."

The Vatican’s Congregation for the Doctrine of the Faith has accepted a final report of the doctrinal assessment of the Leadership Conference of Women Religious, “marking the conclusion” of the oversight, the Vatican announced Thursday.

After a lengthy process that saw the Vatican issue what the sisters called unsubstantiated sharp critiques of their work and life while appointing Seattle Archbishop Peter Sartain to oversee a program of reform for LCWR, Thursday’s release says the Vatican and the sisters both noted the “spirit of cooperation” of the ordeal.

LCWR leaders also had a 50-minute meeting with Pope Francis later Thursday, during their annual visit to Rome to visit Vatican offices.

LCWR president Immaculate Heart of Mary Sr. Sharon Holland said in a statement that the oversight process brought the sisters and the Vatican to “deeper understandings of one another’s experiences, roles, responsibilities, and hopes for the Church and the people it serves.”

“We learned that what we hold in common is much greater than any of our differences,” said Holland.

Cardinal Gerhard Muller, the prefect of the Vatican doctrinal congregation, said in a statement that his congregation is “confident that LCWR has made clear its mission to support its member Institutes by fostering a vision of religious life that is centered on the Person of Jesus Christ and is rooted in the Tradition of the Church.”

LCWR issued a statement about the papal meeting, saying the opportunity “allowed us to personally thank Pope Francis for providing leadership and a vision that has captivated our hearts and emboldened us as in our own mission and service to the church.”

“We were also deeply heartened by Pope Francis’ expression of appreciation for the witness given by Catholic sisters through our lives and ministry and will bring that message back to our members,” the leaders said.

Thursday’s news seems to bring to an end what had been an especially contentious period between the women religious and the Vatican.

The period began in April 2012, when the doctrinal congregation criticized the sisters' group and appointed Sartain to his role, releasing a statement that LCWR's work contained "a prevalence of certain radical themes incompatible with the Catholic faith."

The women religious criticized the Vatican's move, saying in June 2012 it was "based on unsubstantiated accusations and the result of a flawed process that lacked transparency."

The Vatican move also spurred unprecedented nationwide protests of support for the women religious, who many, Catholics and non-Catholics alike, have experience with in their various ministries – such as teachers, doctors, or theologians.

The final report on the oversight issued Thursday by the women religious and the Vatican congregation says that the process has “borne much fruit, for which we give thanks to God.”

“The very fact of such substantive dialogue between bishops and religious has been a blessing to be appreciated and further encouraged,” the report states.

“The Commitment of LCWR leadership to its crucial role in service to the mission and membership of the Conference will continue to guide and strengthen LCWR’s witness to the great vocation of Religious Life, to its sure foundation in Christ, and to ecclesial communion,” it concludes.

The final report addresses mainly two issues: Updating of the organizational statutes of LCWR and the process for which the group chooses speakers and writers for its annual conferences and publications.

Regarding the statutes, the report simply notes that LCWR approved new statutes in 2014 which were given a “positive review” by the doctrinal congregation and approved by the Vatican congregation for religious life.

On the issue of LCWR speakers and writers, the report goes much more in depth, stressing the need for such persons “to have due regard for the Church’s faith.”

Stating that LCWR publications “need a sound doctrinal foundation,” the report states that “measures are being taken to promote a scholarly rigor that will ensure theological accuracy and help avoid statements that are ambiguous with regard to Church doctrine or could be read as contrary to it.”

The report also states that LCWR manuscripts “will be reviewed by competent theologians, as a means of safeguarding the theological integrity of the Conference.”

Mentioning that LCWR gives an annual Outstanding Leadership Award at its conference each year, the report says that “a revised process” for choosing that award winner “has been articulated.”

The report gives no details for what processes might be used to review LCWR speakers or writers. LCWR director of communications Immaculate Heart of Mary Sr. Annmarie Sanders said that both their leaders and officials of the Vatican congregation have been asked not to speak on the conclusion of the mandate for 30 days.

“When a topic explicitly addresses matters of faith, speakers are expected to employ the ecclesial language of faith,” states the report.

“When exploring contemporary issues, particularly those which, while not explicitly theological nevertheless touch upon faith and morals, LCWR expects speakers and presenters to have due regard for the Church’s faith and to pose questions for further reflection in a manner that suggests how faith might shed light on such issues,” it continues.

The doctrinal mandate and oversight of the women religious group was ordered by the doctrinal congregation’s previous leader and former San Francisco archbishop Cardinal William Levada, with the approval of Pope Benedict XVI.

Under the mandate, Sartain was a given a five-year mandate to oversee reforms of the sisters’ group as its archbishop-delegate. Thursday’s news concludes the oversight – which was announced on April 18, 2012 – after almost exactly three years.

Thursday’s report also tacitly criticizes the women religious on several other issues, stating briefly that attention during the three-year process also focused on other matters, including: “the importance of the celebration of the Eucharist” and “the place of the Liturgy of the Hours in religious communities.”

LCWR represents about 80 percent of the some 57,000 Catholic sisters in the U.S. Headquartered in Silver Spring, Maryland, it traces its beginnings to the papacy of Pope Pius XII and first formally organized as a conference in 1956. Its members are the leaders of the various orders of women religious around the country.

Launching of the Vatican mandate in 2012 had led to serious and probing questions among members in the group about whether they could comply with the Vatican order, which effectively gave Sartain complete authority to revise their statutes, review their programs and evaluate their partnerships with other groups.

The day of the announcement of the mandate, former LCWR leader Benedictine Sr. Joan Chittister said bluntly: "Within the canonical framework, there is only one way I can see to deal with this. They would have to disband canonically and regroup as an unofficial interest group.”

Process of implementation of the Vatican mandate over the past three years was opaque, with little public news of how Sartain was treating his role or working with the group.

The only discussion known to have occurred between the archbishop and the group’s members came in a closed door session with some 800 sister leaders at LCWR’s annual assembly in August 2013.

At that point many of the sisters, who were told not to discuss the matter with the press, told NCR that they felt frustration over the slowness of the process and at the feeling that their reputation had been unfairly tarnished by the Vatican.

The final joint report on the mandate is signed by Sartain along with the two bishops who were appointed to help him in his oversight of LCWR: Hartford, Conn., Archbishop Leonard Blair and Springfield, Ill., Bishop Thomas Paprocki.

Allen, Zinn and Steadman met with Francis Thursday along with St. Joseph Sr. Janet Mock, who served as the group’s executive director until the end of last year.

The Vatican mandate against LCWR was one of two concurrent and controversial investigations of U.S. sisters in recent years. The other was an apostolic visitation into individual orders of women religious, launched by the Vatican’s religious congregation in 2008. A final report on that investigation was issued in December.

Click here to go to a GSR resource page that contains the Vatican press release on the end of the mandate for LCWR and the joint statement. 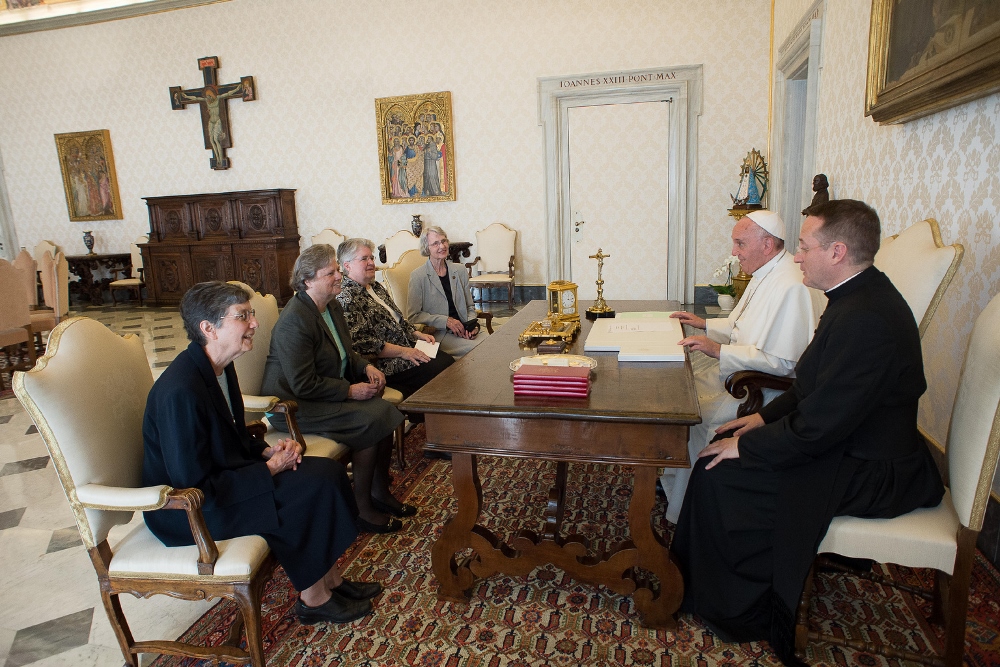 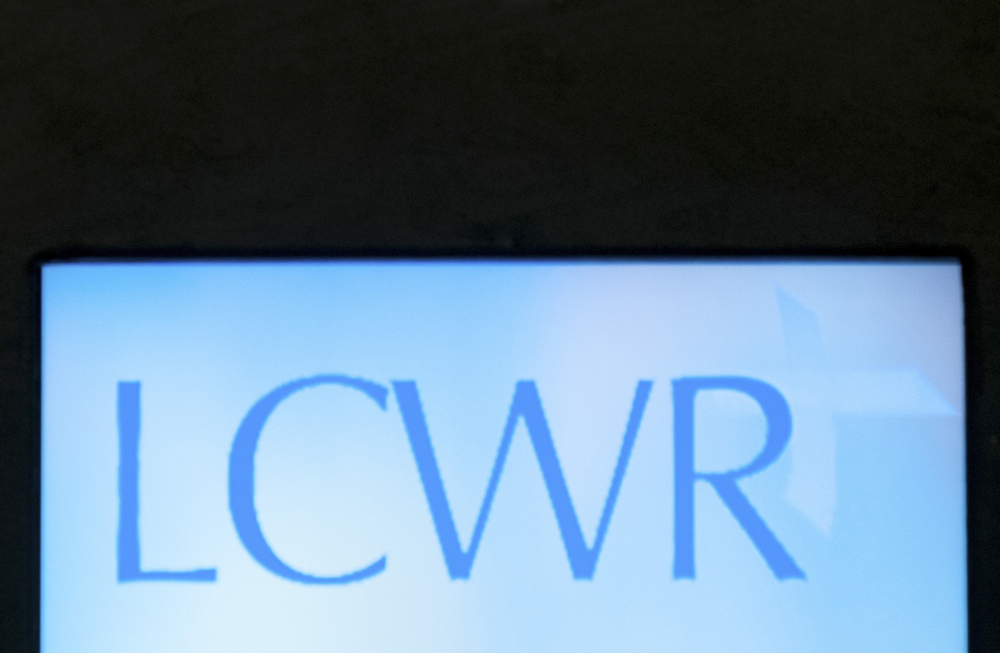