Submitted by Michael O'Loughlin, Marketing and Communications Director, Milwaukee, WI  You can find a death notice or obituary here. 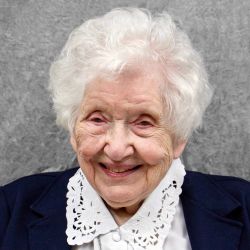 Sister Annelda Holtkamp, who lived her religious vocation as a homemaker, died on April 19, 2020, at Our Lady of the Angels Convent, in Greenfield, Wisconsin. Sister was 102 years old.

Sister Annelda was born on October 27, 1917, in St. Paul, Iowa. She was received into the School Sisters of St. Francis on June 13, 1943; made her first profession of vows in 1945; and made final (perpetual) vows in 1951.
Sister Annelda is survived by her sister Renelda Pieper of Houghton, Iowa; and the School Sisters of St. Francis Community, with whom she shared her life for 77 years.

Sister Annelda ministered in Wisconsin, Illinois and Nebraska for more than seven decades. In the Archdiocese of Chicago, Sister served as homemaker at St. Bernardine Convent in Forest Park (1950-1951), and at St. Peter Convent in Skokie (1954-1957).

In the Diocese of Green Bay, Wisconsin, Sister served as homemaker at St. Mary Convent in Chilton (1992-2005).

In the Archdiocese of Omaha, Sister served as homemaker at St. Mary Convent in Osmond (1952-1954).

In her retirement, Sister served in the ministry of prayer and presence at St. Joseph Convent, Campbellsport (2005-2011), and at Our Lady of the Angels Convent, Greenfield, from 2011 until the time of her death.

A Funeral Liturgy was held on April 24, 2020, at St. Joseph Chapel, Milwaukee. Interment was at Mt. Olivet Cemetery in Milwaukee.