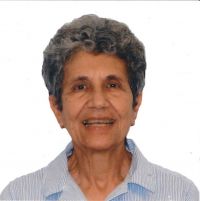 Rosemarie Milazzo is a Maryknoll Sister from Brooklyn, New York, whose parents migrated from Sicily. After an assignment to Chinatown, New York, as teacher and principal, she was missioned to Africa -- first for language study and then to Kenya to serve as a lecturer at a Teacher Training College. Later she moved to the northeastern desert of Kenya, close to Somalia, as part of a team of Maryknoll Sisters who helped relocate people and acclimate them to the desert as part of a "reclamation project" for landless and homeless Kenyans. She also worked with AIDS patients in Tanzania before returning home to serve as personnel director for the Maryknoll Sisters. Most recently she has served on Christian Peacemaker Teams in the Democratic Republic of Congo, in Kurdistan, Iraq and in Lesbos, Greece.

Greetings from Lesbos. We are enjoying a lovely breeze in the mornings; flowers and trees are rejoicing. This beauty contrasts with the camps, which are overflowing with refugees. More boats arrive each week, with more and more people fleeing for their lives.