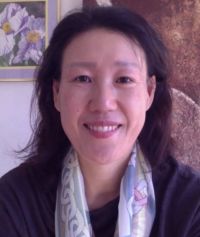 Sophia Park Ph.D., is Assistant Professor of Religious Studies and Philosophy at Holy Names University and a member of the Sisters of the Holy Names of Jesus and Mary. She authored a book, A Hermeneutic on Dislocation as Experience: Creating a Hybrid Identity, Constructing a Borderland (Peter Lang: New York, 2012) and has written numerous articles and chapters in books, focusing on biblical spirituality, cross-cultural spiritual direction and religious life from a global feminist perspective. Her main interest is how to empower the marginalized in this global society.

A legacy of border-crossing spirit

Commentary - A popular current topic regarding religious life in the U.S. is the “middle space.” In fact, LCWR dedicated its Winter 2015 volume of The Occasional Papers to this particular theme. The middle space – which can also be called the “in-between space” or “the borderland” – signifies adaptability, ingenuity and mobility in the midst of uncertainty. In the early history of immigrant women religious in the U.S. (1727-1917), I clearly see the border crossing spirit regarding adaptability. Many religious communities’ chronicles show that the first group of sisters came to the U.S. to launch their apostolic work, becoming immigrants serving immigrants. How can the border-crossing spirit be applied to today’s society?

Beyond habits and no habits: A reflection on the identity of religious women in the U.S.

Can we really say that sisters have lost their sign in the world just because they do not wear habits? And if so, is there also a sign of not wearing habits, of their invisibility? What, then, is the sign of this invisible but strong presence of women religious?

If we cannot create a new sisterhood, global sorority will only be a phrase, not a living reality. To do so, what would happen if a meeting were as slow as a long gaze? This long gaze would bring quietness of mind.

A reflection on religious vocation: The wine is ready, but the wineskin is not

These days, we often hear that there is a crisis in the vocation of women religious in the United States. We have few new members, and the average age of present members is above 70. While there are other plausible explanations, I still wonder if the crisis of religious life is in fact equivalent to the decrease in new members and, further, if so, whether vocations have really decreased.