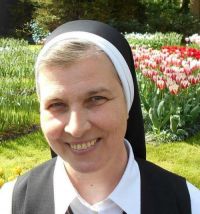 Valentina Hadarau is a Sister of Saint Basil the Great in Romania. After attending a professional school in Cluj, she worked in a factory for 10 years. She entered the novitiate in 1980 and made final vows in 1987, after which she worked as a catechist in the underground. Two years later, after "the freedom," she went to study in Rome, but was soon appointed novice mistress. In 1995, the community had their first general chapter, after which she began serving in community leadership as general councillor, provincial vicar, and provincial. She now ministers as house superior for a community in Lugoj, and teaches religion in elementary and high school.

For us consecrated persons in love with God, it is clear that the power of his love conquered us. Otherwise we would not have had the courage to respond promptly, with joy and courage, when we "discovered" the call during the communist regime's time of tribulation in Romania.