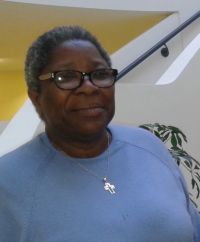 Winifred Ojo belongs to the Sisters of St Louis, an international congregation founded in France in 1842. Born in western Nigeria, she currently lives and works on the St Louis Central leadership team in Ireland. Winifred is a trained teacher and formator who taught at both the primary and high school levels and worked as a formator in the Nigerian province for seven years. She then served on the provincial team in Nigeria for eight years and, after a sabbatical at Loyola University in Chicago, returned to work in school administration as well as on retreats. In 2009, she was elected to the institute's central leadership team and was re-elected in 2015.

Care of people and the Earth is one

I have always been passionate about the social teachings of the church, and in my studies I had the opportunity to explore documents that raised my awareness of justice issues and see how the church encourages her missionaries to address them in light of Gospel values.

Charism is carrying our community through global changes

At the 2015 chapter meeting for the Sisters of St. Louis, which was founded in France, the sisters elected the majority of their leaders from the Global South, including Sr. Winifred Ojo. This congregation is working on the geographical and cultural shift in religious life.