To say Sr. Gerardine Mueller of the Dominican Sisters of Caldwell, New Jersey, is a glass-half-full person is an understatement.

She is 96 and cannot do many of the things she used to. She fell three years ago, and the injury caused the loss of sight in her right eye.

But that doesn't get her down.

Instead, she counts a long list of blessings: She is still able to make art, which she dearly loves; she can still do some calligraphy, which is her favorite artistic medium; and she had a long, fulfilling career as an artist and art professor at Caldwell University. More importantly, she has been able to fulfill a dream she had since she was 3 years old: being a nun.

On Sept. 23, Caldwell University will dedicate its new art gallery, which is named for her.

GSR: Is it safe to say your work has had a big influence at Caldwell University?

Mueller: Oh, yes. The college published a history of the art department, and it was basically a history of me! And the art gallery — I was so surprised. I haven't even seen it yet, so I need to get over there and investigate.

They asked if I would provide some work to display, but almost all my work is installed in buildings, so I couldn't. I'm 96 and on the way out, so I'm very pleased.

Besides the stained glass, you're also well-known for your handmade Christmas cards.

Yes. I'm almost halfway finished with this year's. I'm a little behind because I tried something this year and couldn't do it. I lost sight in my right eye three years ago, so I lost some of my balance and depth perception. But I figure at 96, that's not so bad, and it could be worse. It's a good thing it didn't happen when I was 65. So because of that, I had to change this year's card, but I have about 50 finished. I do 140. This year, they're all in blues, and it involves a lot of cutting out.

Your Christmas cards are often blue, aren't they?

Yes, and so is a lot of my other work. When I began doing stained glass, I'd go to New York for supplies, and they'd say, "Here comes the blue nun" because I was picking out blue glass all the time. I don't know why. Maybe it comes from my youth: My mother promised to dress me in blue and white for seven years in honor of the Blessed Mother, because I was expected to be born dead and she wasn't expected to survive, either. So she named me after St. Gerard [the patron saint of expectant mothers].

My mother was a living saint. I don't remember this, but she told me that when I was 3 years old, I wanted to be a sister. Those things can change very easily, but it didn't.

How did art become both your career and passion?

My mother was an artist, and I always loved art. When I was planning to go to high school, I was considering Newark Arts High School, so I called and asked for more information, and they asked if I was willing to pose for other art students. Well, that created a little problem because the understanding was it was nudity. So I didn't go, but it's a wonderful school.

When I entered college — it was Caldwell College at that time — I chose to major in science and history. Then the science professor reported to the sisters that I had this talent in art. Eventually, I got my Master of Arts and Master of Fine Arts at the University of Notre Dame.

I love every medium, but my very favorite is lettering, calligraphy. I taught that, and it's one of the courses the alumni remember most. I can still do some of it, but I can't do what I did years ago.

One of the things in our archives is my Master of Arts project, which was the three ceremonies of reception, first profession and final profession, all in calligraphy and with paintings, bound into a book on vellum. Unfortunately, we never really used it because Latin went out of fashion right when I finished it!

Are there projects where you particularly felt the Spirit moving through your work?

When I did the Stations of the Cross in the motherhouse chapel. I prayed before each one that I would get the right sense of it, and then I found that the drawing came very easily. The large windows are fabricated at a stained-glass studio — otherwise I'd still be working on them — but I made the stations myself. These are stained glass, but they're not windows. They're in a wooden box with a light behind them.

When we had the chapel renovated, the sister in charge asked me if I would make the tabernacle. I said, "You've got to be kidding! There are catalogs with 300 beautiful tabernacles to choose from. Just pick one!"

But that night, the song "Holy, Holy, Holy" kept going through my head, so the next day, I said OK. 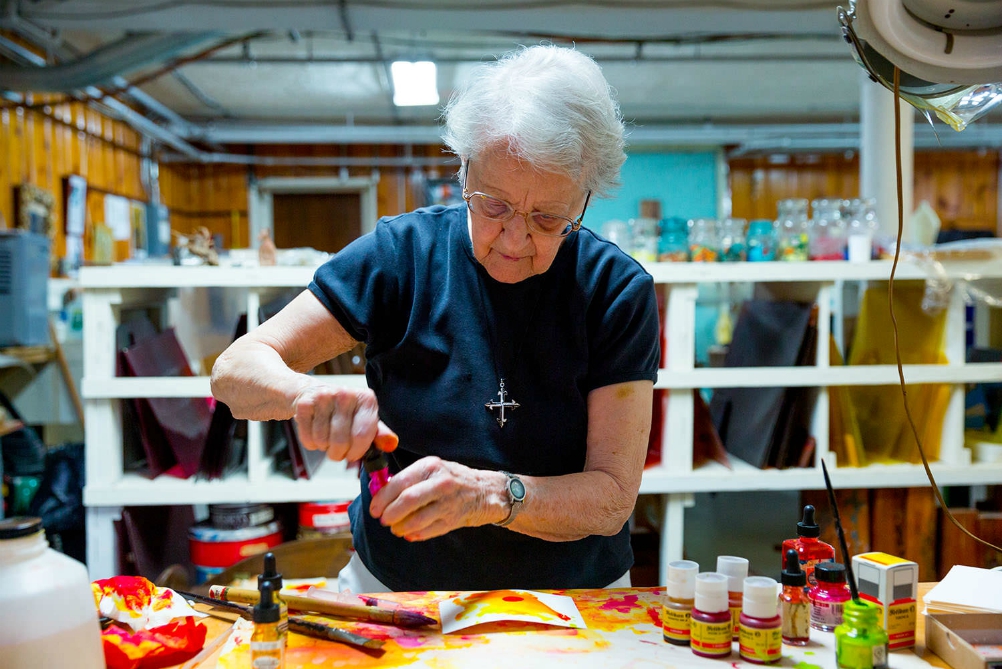 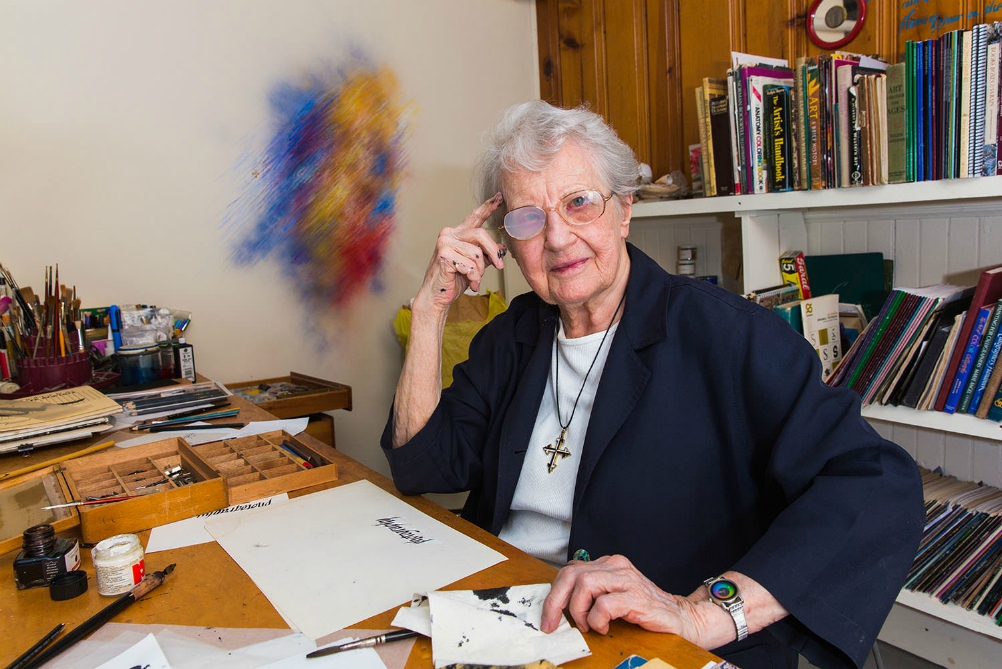 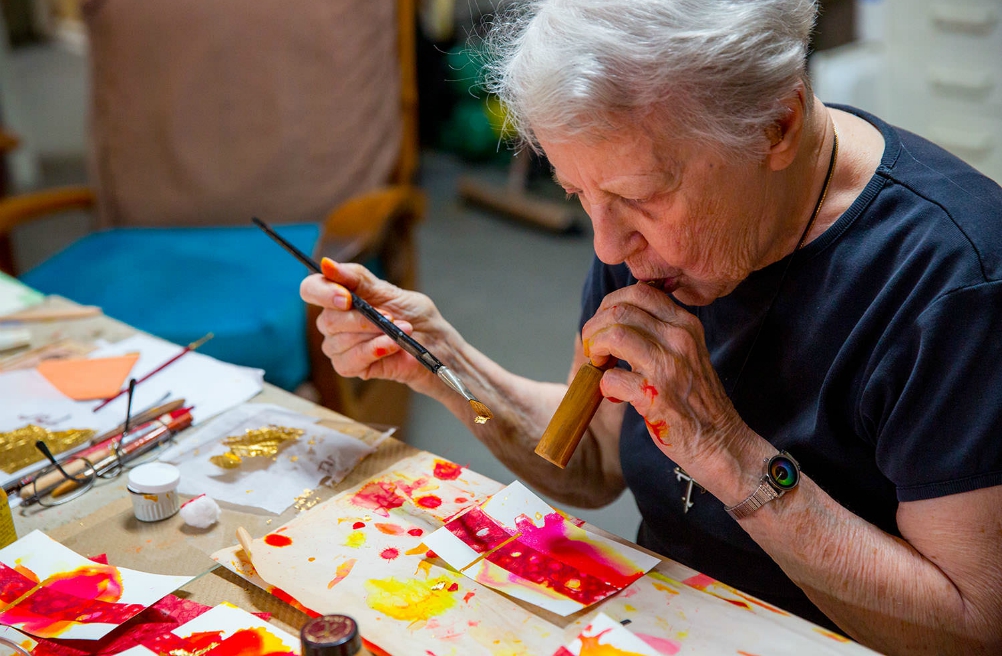 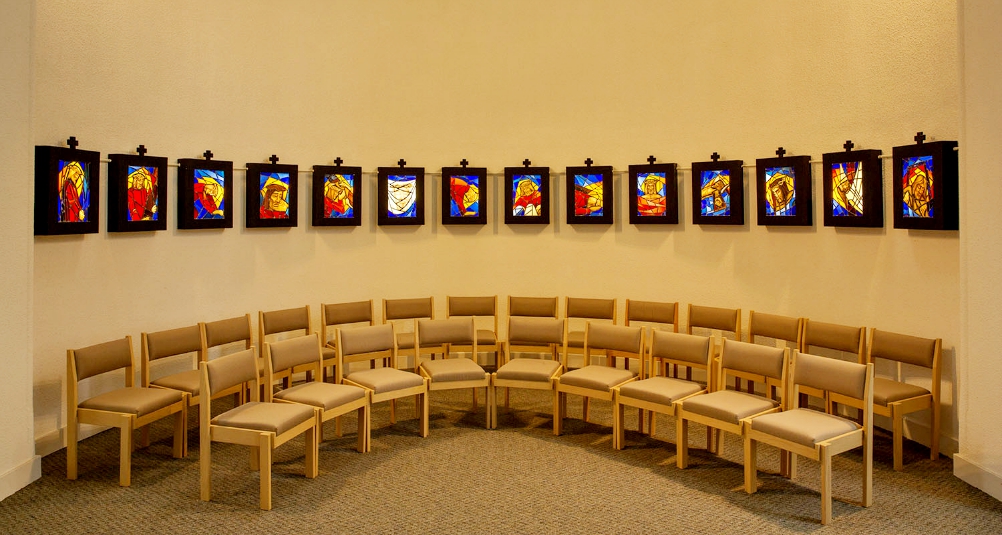 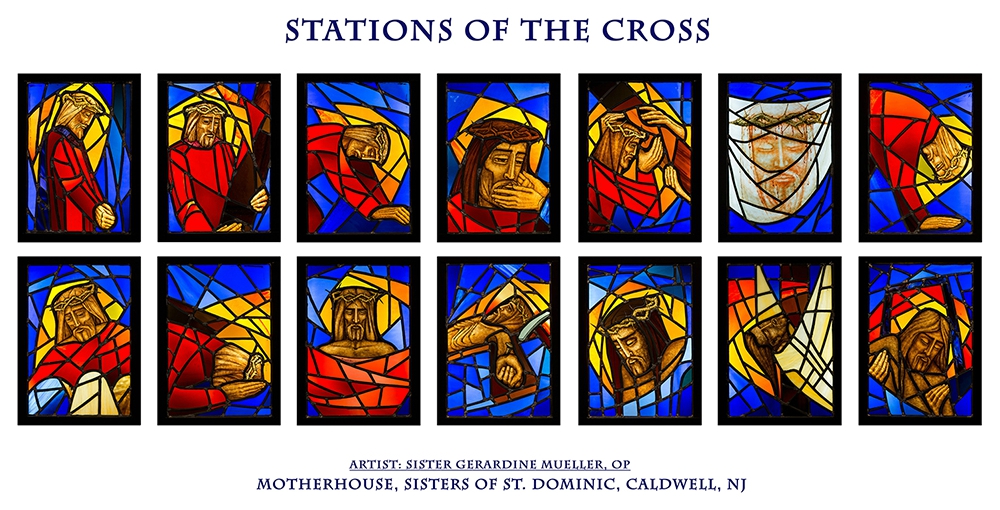