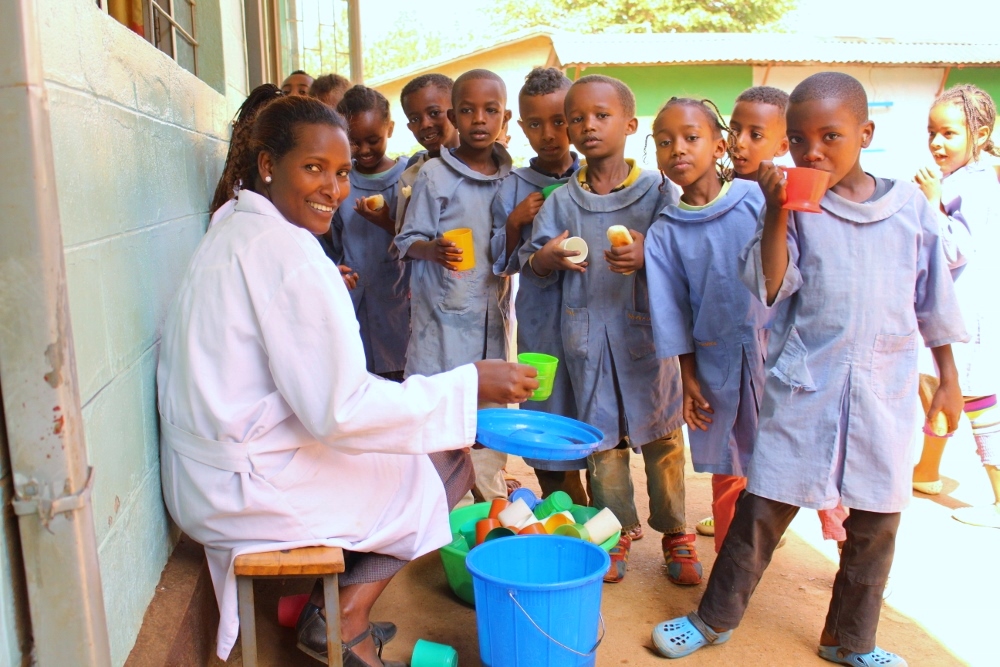 Dilla, Ethiopia — Notes from the Field includes reports from young people volunteering in ministries of Catholic sisters. A partnership with Catholic Volunteer Network, the project began in the summer of 2015 This is our fourth round of bloggers: Christian E. Ruehling is a volunteer missioner for VIDES+USA currently serving in Geneva after five months with the Salesian Sisters in Dilla, Ethiopia, and Maria Beben is a staff writer for Franciscan Mission Service in Washington, D.C.

The road from Addis to Dilla leads southward from the cooler temperatures of the highlands to a drier and warmer climate. The landscape changes from arid brown landscape to the lush green mountains that surround the town of Dilla. Mangos, papayas and avocados grow in abundance, and the blooming coffee bushes provide the beans that allow us to drink fresh coffee every day.

It was quite the change from living the suburban life in the United States, and there were some things that I had to get accustomed to. I arrived during the dry season, so it took me a while to get used to living in hot weather without air conditioning or fans. I was living a simpler lifestyle compared to what I had back home, but then again, I chose to live this experience.

My living situation was very good compared to those who lived outside the Salesian compound in small huts that fit many family members. The sisters' home is serene and clean, and more importantly, it has its own supply of water, and I could count on a hot shower every morning. Power shortages are experienced more often during the dry seasons since Ethiopia's electricity is mainly generated from hydroelectric plants. It was common, therefore, that we had rolling power outages. However, the residents of Dilla had to deal with an unusual two-week water shortage during the dry season in March. 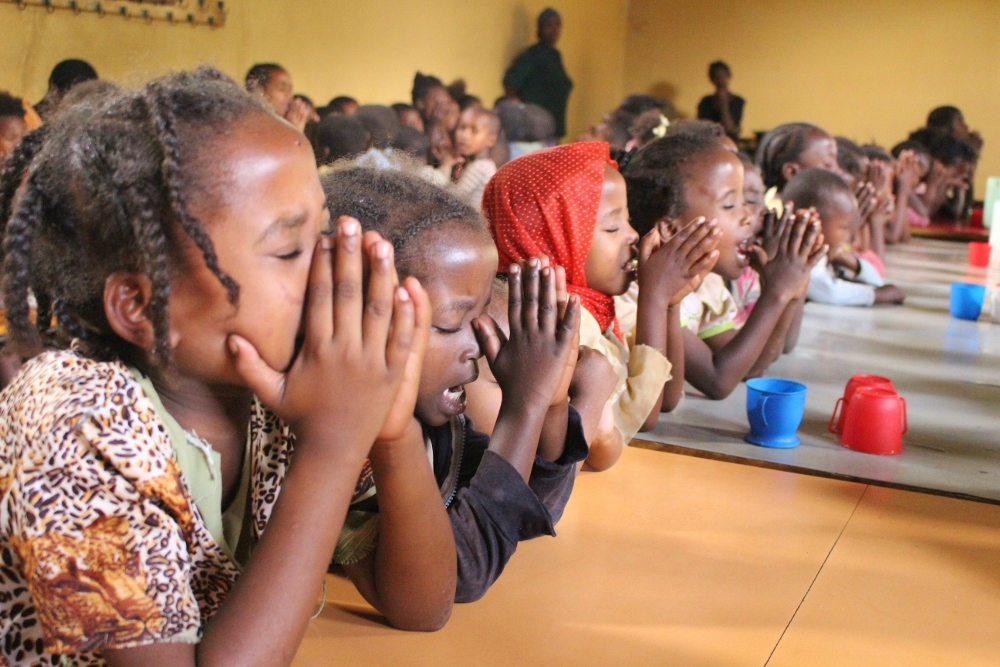 The children pray before a meal. (Christian E. Ruehling)

Normally, water is supplied to the city once a week, and families have to store up enough water for cooking, washing and drinking. In the streets, children and women carry jerry cans to fill with water. Boys also drive donkey carts stacked with these cans of water to sell. So life was difficult when the utility company cut off their already limited supply of water for two weeks without proper explanation.

Nearby rivers and creeks also serve as water sources; however, water levels are already very low because of the dry season. Also, the river water is dirty and polluted, as people use it to wash their clothes, motorbikes, trucks, and donkey carts. As a result of the poor, dirty water supply, many people contract bacteria-related illnesses like typhoid and typhus, as well as malaria carried by mosquitoes. The Salesian sisters see hundreds of these patients every week at their health clinic, where patients receive low-cost medical assistance, including free medicine for tuberculosis and malaria, which is part of a government initiative.

At the compound, we ate a mix of Western and local food, and I was lucky enough to be fed three times a day. Some of the children ate only one good meal a day. The sisters have a bakery in the compound that bakes over 300 rolls every day to give to the kindergarten children at school. However, when the power is out in the morning, the baker can't make the rolls, so the sisters have to give out crackers to the children.

Another nutrition program sponsored by the Salesian priests is one that feeds between 150 and 200 children every day, except Sundays. The children range from 1 year to around 14 years old. Grandmothers as well as mothers with newborns also come to the feeding center for their meals.

The feeding center is operated by five women who prepare and serve the food while trying to maintain discipline in a room filled with hungry children. They serve a hearty meal of broth with potatoes and macaroni (some days, they include meat) along with a plate of maize. Sometimes, the kids bring avocados that they mash into the maize to create a green ball of mash to go with their soup. The broth and maize are prepared separately in large pots that somewhat resemble a sorcerer cauldron over a glowing fire. 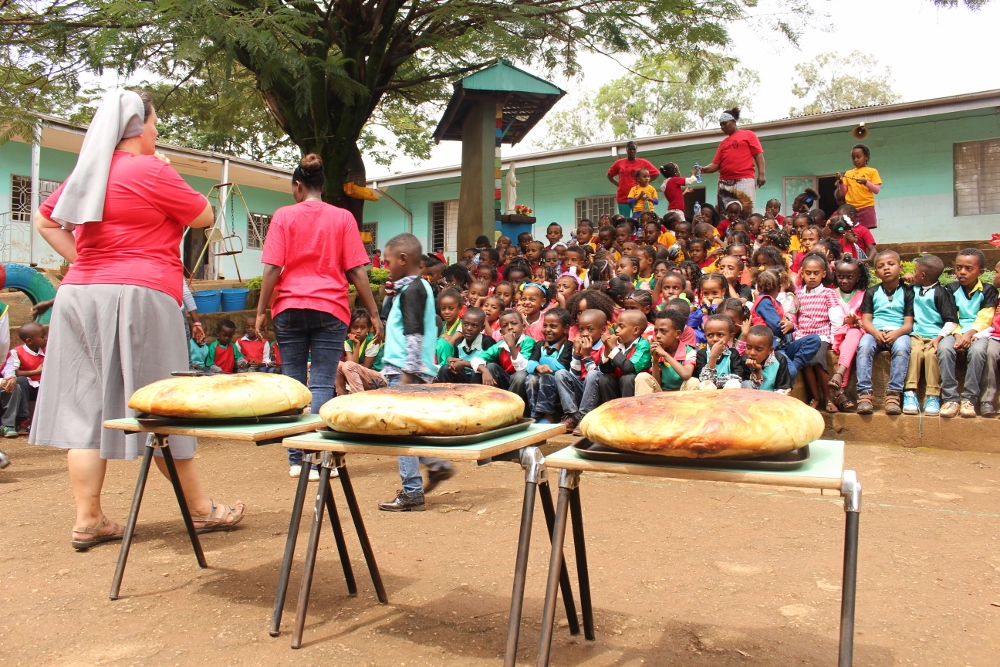 Bread for children at one of the Salesian fun activity days. (Christian E. Ruehling)

Before every meal, one of the children will go to the front and recite the "Our Father" while everyone joins in chorus. One day, they recited the "Our Father" in English, and it was beautiful — I've never heard it sung in that chanting manner before.

After the prayers, three ladies dish out the food from the front of the dining hall while some of the older children play the role of servers and bring the food to their eager diners. The children behave well and stay seated while the food is served. After everyone is served, they can come up for seconds, which sometimes turns into chaos as they are eager to eat more. I have had to stringently implement a queue so as not to overwhelm the servers.

After the meal is over, a small group of children will stay behind to collect the plates, bowls, spoons and other utensils and clean up the tables. All in all, the whole process takes about one hour, after which the children merrily leave to do whatever small kids in Dilla do.

I have always enjoyed volunteering at soup kitchens, but I have enjoyed this one the most. I find it truly amazing to see the children thrive despite their living conditions, but it is a real delight to come here every day to see the smiles on their faces as they enjoy their meal. 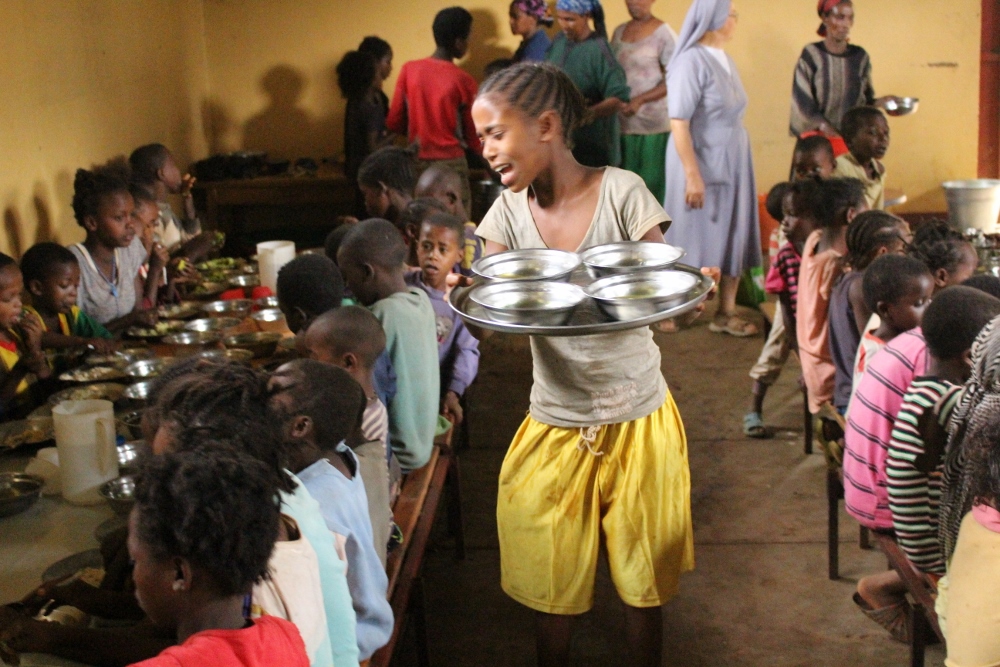 An older child serves food to the younger ones. (Christian E. Ruehling)