by Adele McKiernan
Arts and Media
This article appears in the Notes from the Field feature series. View the full series. 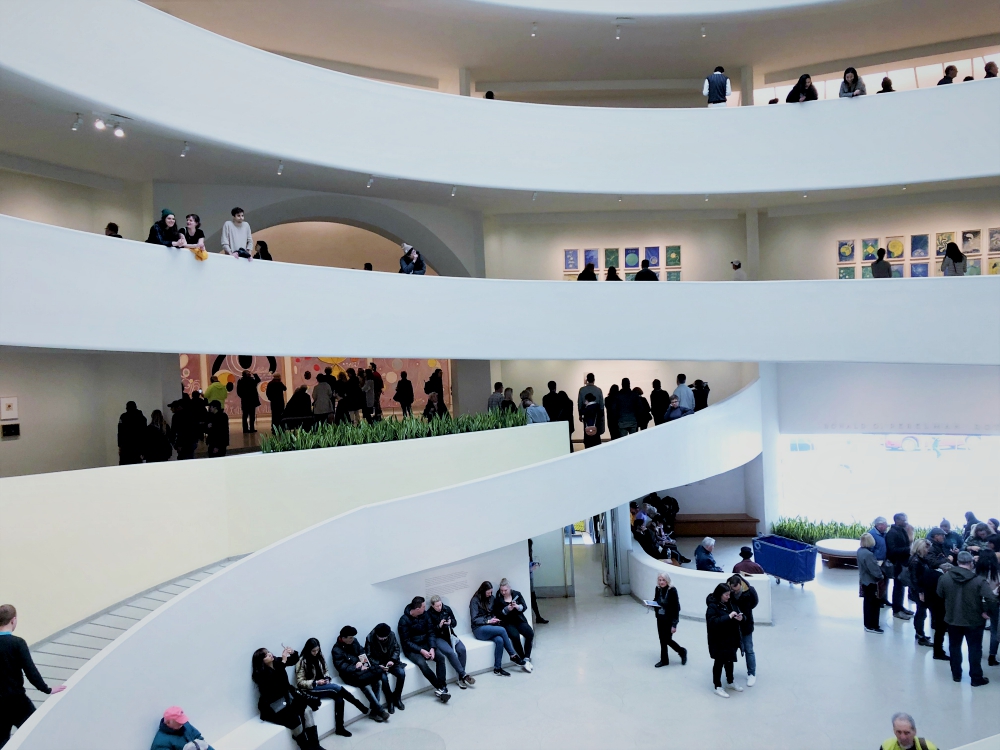 The Guggenheim Museum in New York on March 22, when my dad and I met Talia and her Swedish friends to see "Hilma af Klint: Paintings for the Future." If you look closely, you can see Talia and me on the third level to the left! (Courtesy of Terry McKiernan)

I have known for a long time that spirituality and friendship are connected. I think I realized this at my middle school best friend's bat mitzvah, when I was graced with a seat at the center table. But on March 22, the relationship between the two moved me to a new level when my friend Talia and I ascended the ramp at New York's Guggenheim Museum for Hilma af Klint's first solo American show, "Paintings for the Future."

Af Klint was a prolific Swedish artist who was inspired to begin a private body of hundreds of abstract works in the early 20th century, before male artists such as Wassily Kandinsky and Piet Mondrian gained notoriety.

Her artistic development was born from a rich spiritual practice deeply tied to friendship. Starting in 1896, af Klint and four female friends formed a Spiritist group, "the Five," whose occult rituals consisted of prayer, meditation, Bible readings and séances in which they would commune with spirit guides.

In 1906, one guide of theirs named Amaliel tasked af Klint with preparing a spiritual message for humankind, which took the form of a series of 111 paintings created over the course of two years, known now as the Paintings for the Temple. She received word from the guide that they were meant to be displayed in a spiral temple when complete; the show at the Guggenheim can be taken to represent the actualization of her assignment.

These paintings are the first of Hilma af Klint's Paintings for the Temple, "Primordial Chaos." She often included elements of organic growth and mathematics in her work at this stage. (Courtesy of Terry McKiernan)

As Johan af Klint, her grandnephew, reminds us in an article for the Guggenheim's website, "Inspiration and Influence: The Spiritual Journey of Artist Hilma af Klint," her spiritual and artistic coming of age occurred at a time of immense societal change: "Discoveries within the natural sciences, such as radio waves and X-rays, made people realize that there are aspects of our world that we cannot perceive with our five senses." It is fitting, then, that the Five's paranormal powers were channeled at that critical time in human history, that these women came together to exceed time and space and to form the foundation for af Klint's transcendent work.

I joined the mission of the Sisters of Loretto at a unique time. Our century has brought about unprecedented changes not only to the realms of technology, but to organized religion as well, and fewer people are choosing religious life. But as a young Loretto Volunteer, I have found inspiration and guidance through the community of Loretto volunteers, co-members and vowed sisters, reminiscent of the nature of af Klint's relationships with her spirit guides and the Five.

The Sisters of Loretto have an organic and eclectic spirituality that came to mind as Talia and I wound our way through af Klint's life's work. "I Am the Way," the Loretto community's governing document, reads, "Because expressions of prayer spring from the depths of each person, as well as from communal sources, we respect the unique way in which each fosters the life of prayer. With sensitivity, we encourage one another to find the time, place, and style of prayer that is spiritually nourishing."

I have found Loretto spirituality to be uniquely open and community-centric, encouraging an expansive relationship with inner life and higher power over doctrine or tradition. Similarly, af Klint incorporated many religious and philosophical traditions into her art, including Theosophy, Christianity and Rosicrucianism, and she did so in community. Hers was also a fluid religiosity grounded in community and communication. 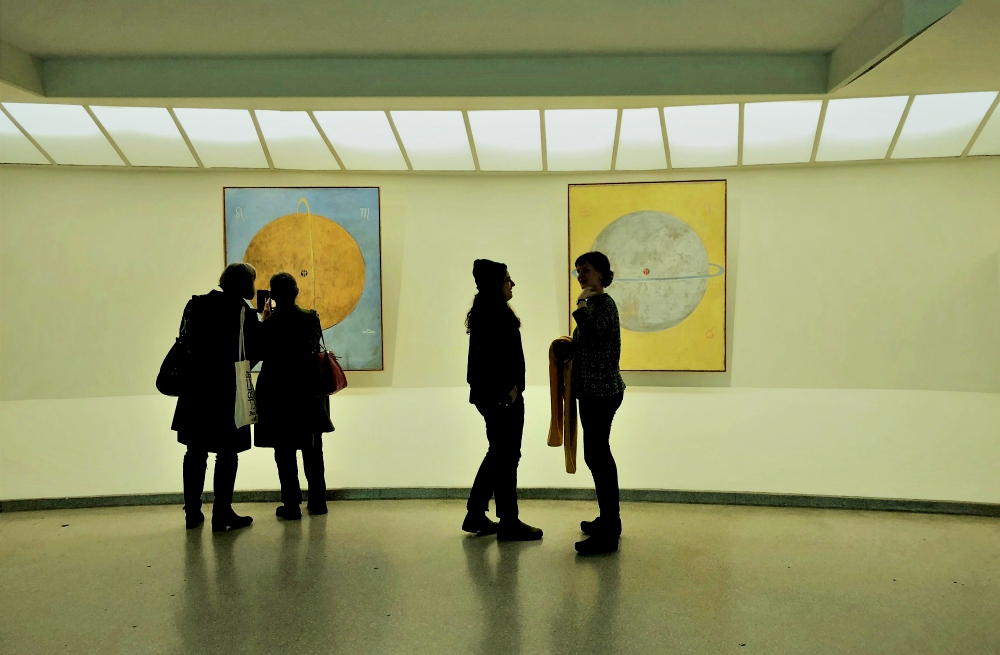 Talia and I stand in front of Hilma af Klint's "The Dove," which shows a planet with a small hole in it that contains two tiny angels. Each corner of the painting has a different sign of the zodiac: Aries, Cancer, Taurus and Gemini. (Courtesy of Terry McKiernan)

I relate to af Klint's interdisciplinary and unfastened relationship to spirituality. Before being drawn to Loretto, I lived in a multifaith, historically Jewish co-op called Ofek Shalom ("Horizon of Peace" in Hebrew). There, my housemates and I came together every Friday for Shabbat dinner. The Five, af Klint's spiritual circle of friends, also called themselves the "Friday Group." As their practices were monumental and transcendent for af Klint, so was Ofek's Shabbat ceremony for me.

Before moving to the co-op, I had not seen religion as having the potential to nurture, but after many Shabbat dinners with friends and family, I began to see the beauty and significance of communal ritual and prayer.

Though we don't live together anymore, I still keep in touch with the lifelong friends I made at those Friday night dinners at Ofek. We consult one another on important decisions, share in each other's joy and heartbreak, and support one another's professional and artistic endeavors.

Our friendship is foundational.

Feeling unsteady away from this community and these friends when I began my Loretto year, I sought out JoAnn, a co-member who lives at the Loretto motherhouse in Nerinx, Kentucky, and we began to have conversations about spirituality. Once, she compared knowing God to feeling an elephant with one's eyes closed: One can never quite know God fully. Even when one is close, they are only in contact with one part of a fuller presence. 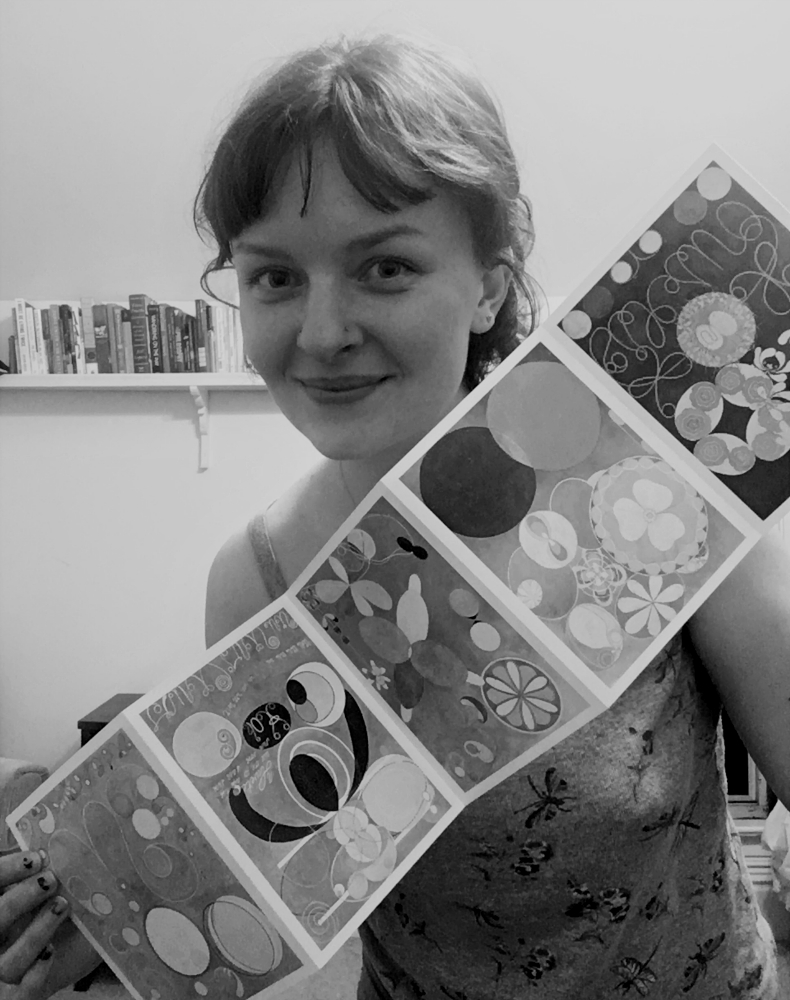 I show a set of five postcards I got at the Guggenheim Store to send to friends. These are the second half of The Ten Largest, a group of af Klint's huge 10 first paintings, now hung on the ground floor of the Guggenheim. Together, they illustrate the phases of human life from childhood, youth, adulthood, to old age. (Adele McKiernan)

This fascinated me. The rough, unwieldy image of an elephant reminded me of how I often feel about religion, how I have never felt particularly insightful about my relationship with any God.

In mulling over JoAnn's analogy, I came across an ancient parable she must have been alluding to that is present in Hinduism, Buddhism and Jainism. It is a story of a group of blind men and an elephant. In it, the men come across an elephant for the first time. They begin to each feel a different part of its body and describe it aloud to try to conceptualize the animal.

Over time and culture, many endings to and interpretations of the story have come to be. One says the men began to fight because each thought the others were lying about what they felt, the moral being that people favor and prefer their own limited experiences to those of others at the detriment to the whole.

For me, though, it is useful to zoom out and give people more faith than that. If the elephant is like God, then each person is, as JoAnn said, experiencing a personal version of God that, through dialogue, could be combined into a collective spiritual understanding.

This conversation about what the world feels like is friendship. To know God is to be with friends, fumbling in the dark together, like the Five on a Friday night in 1906, until someone finds what we've all been searching for and a way to deliver it back to the world.