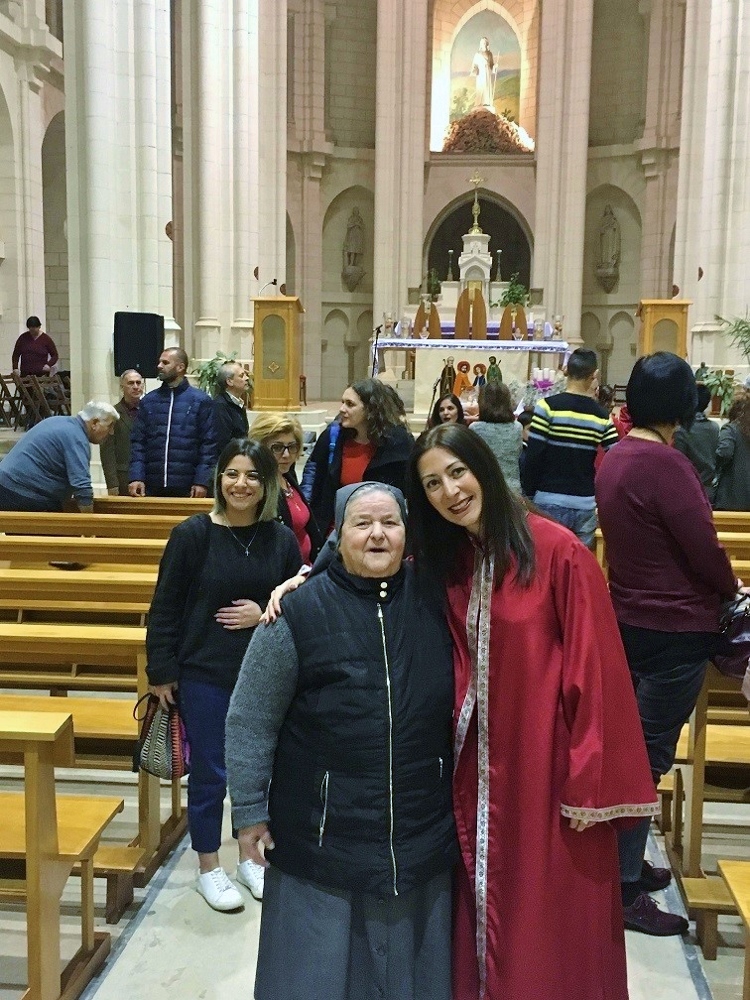 Natalia Liviero poses at the Church of Jesus Adolescent after her Christmas choir performance with Sister Anna, from Italy, who has been at the Nazareth Salesian Sisters School for the last 30 years. (Provided photo)

One of my adventures in mission was to join the Jesus Adolescent Church Choir – Don Bosco Nazareth, which sings in Arabic. The choir director, Johnny, and everyone welcomed me warmly. Asaad, a man who works at our school, and Vida, a music teacher at our school and a talented soprano, have been with the choir for many years.

In November, we started preparing for the Christmas concert, but I had to be out from practice a couple of times since I was sick and also had to spend few days in Jordan to renew my visa in Israel. Therefore, I didn't know much about the songs for the concert.

On Dec. 14, we had our first performance at Nazareth Village, a beautiful place that resembles life from when Jesus lived in Nazareth. We did three informal performances at a small Roman theater within three hours as people came and went. It was the first time I did something without being prepared, not knowing the songs, the place, or the program, but by the last performance, I felt more confident. 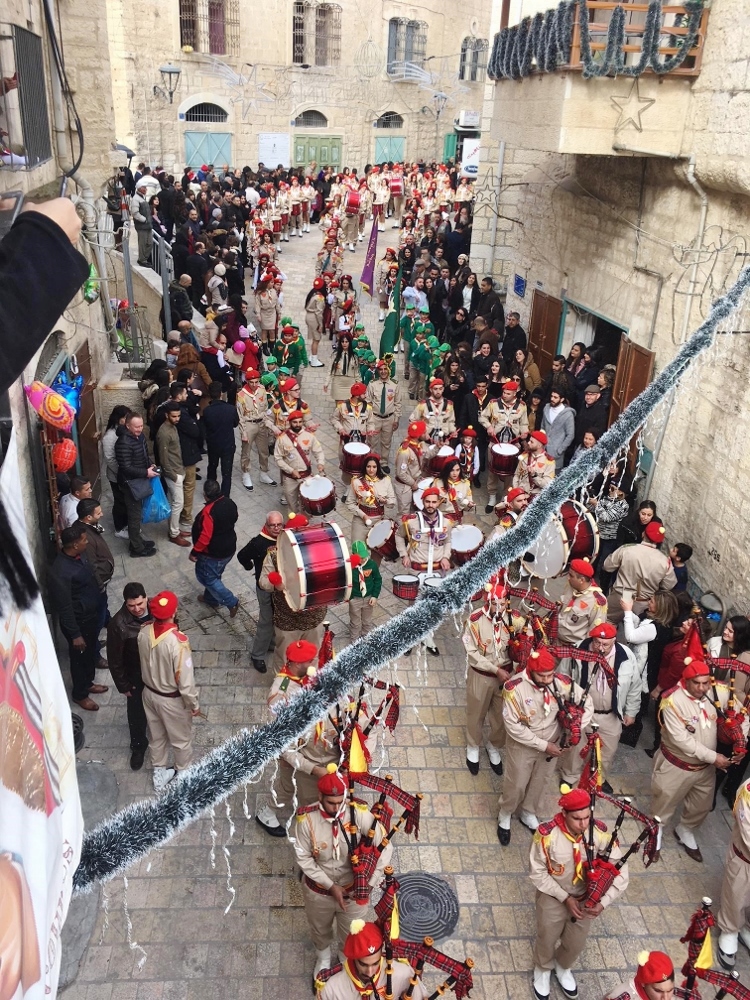 Pictured playing the drums in the middle of the Scouts Parade is the 2017 Palestinian Arab Idol Yacoub Shaheen, from Bethlehem. (Natalia Liviero)

Then, on Sunday, Dec. 17, we sang at the orphanage Beit Al-Hanan in a nearby poor Arab village of Israel. I didn't know Johnny was an entertainer and a magician; the girls at the orphanage and I were amazed with his tricks. The choir also brought Christmas presents and some chocolates for them. There was only one Christian among the 40-plus Muslim girls, but all of them enjoyed the presents and knew most of the songs.

Before the concert began, I talked with the girls, who hardly knew English but asked me to speak in Spanish then in the other languages I speak (Italian, Portuguese and Hebrew), and they were so excited to hear me speaking in other languages that they kept asking me to say something in languages I don't speak, such as Russian and Korean!

On Dec. 21, we had our main concert at the church. It was the most important one, and I was ready! It was the first time I sang in public, and the Arabic language made it more special.

On Dec. 22, the day after the main concert, I traveled to the sisters' house in Cremisan, Bethlehem, to spend Christmas in the city were Jesus was born. On Sunday, Dec. 24, after morning Mass at the Cremisan Salesian Monastery, I went to downtown Bethlehem to meet a Palestinian friend I made at the Aladdin Project in Berlin in 2014. We watched the scouts' annual parade in which the scouts, representing most of the different Christian churches and schools from Israel and Palestine, march and play music to receive the apostolic administrator of Jerusalem and Jordan, Pierbattista Pizzaballa, on his way to the grotto of the Nativity Church, as is customary on Christmas Eve. The city was jam-packed with people from all over the world, and it was hard to walk on the streets. The holiday atmosphere was incredible.

That night, I received the best Christmas gift of my life. We went to the midnight Mass at the Nativity Church of Bethlehem with four of the sisters and Anna, a young volunteer from Italy. It was cold and raining heavily, but we were dressed for the weather, and we could get in the church fast. To attend, you need to order in advance free tickets issued by the Franciscans, who are the custodians of the holy sites in the Holy Land. 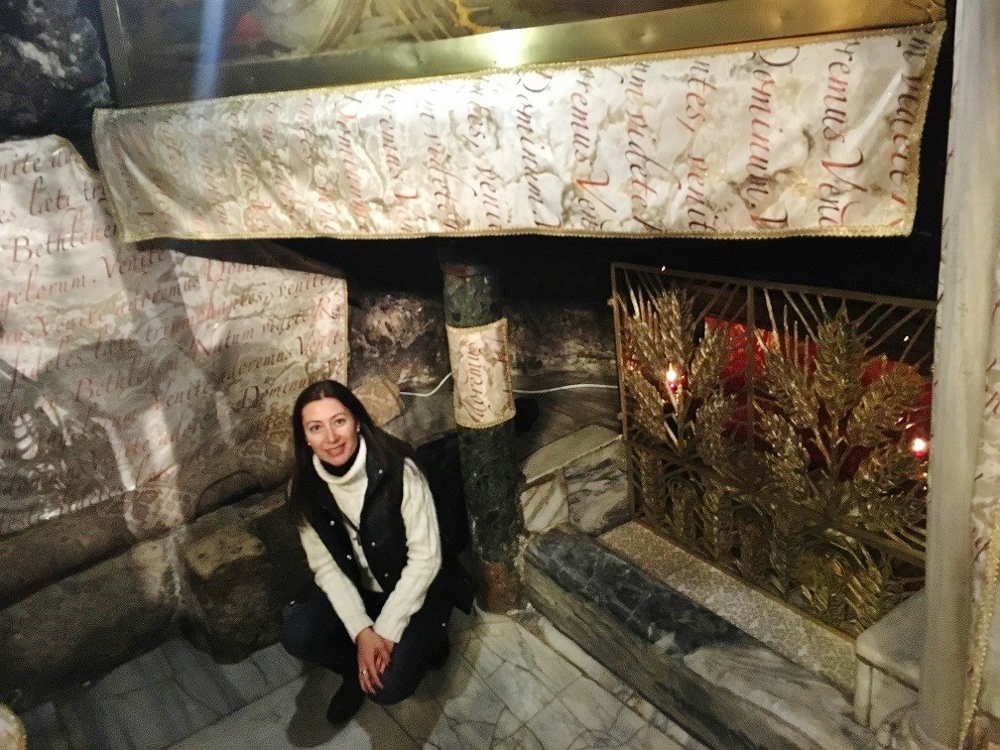 We arrived by 9 p.m. and spread out inside of the grotto, where each of us found a special place for prayer. Anna and I sat at the grotto that was the manger where Jesus was born and from which the Mass was celebrated. It was so special to be there that it took me one hour to pray one rosary. I thought about all the people I know and don't know and prayed for everyone, naming the ones I know one by one.

I prayed a rosary for all my family and my friends and their families.

I prayed for all who are sick or are going through a special situation in life.

I prayed for peace in our hearts and in particular for peace in the hearts of the Israelis, Palestinians, and extremists in all religions so there could be peace in the Holy Land and in the Middle East.

I prayed for all the Christians in the Middle East who are persecuted and for the priests and nuns who so lovingly and courageously work in this part of the world. 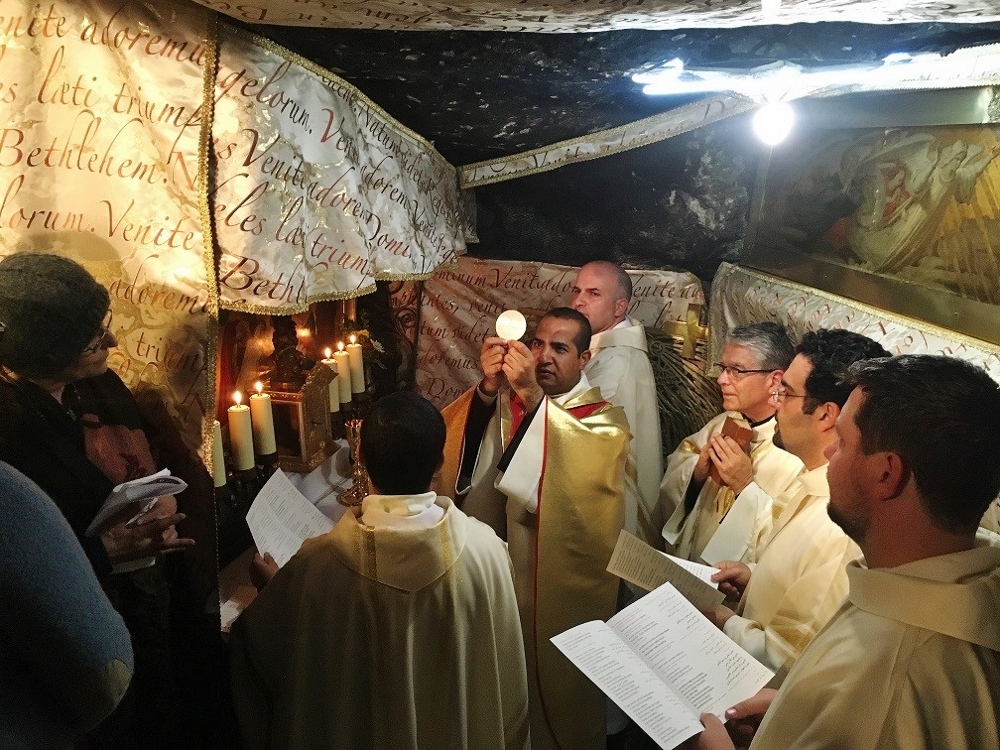 Priests celebrate midnight Mass at the manger where Jesus was born. (Natalia Liviero) 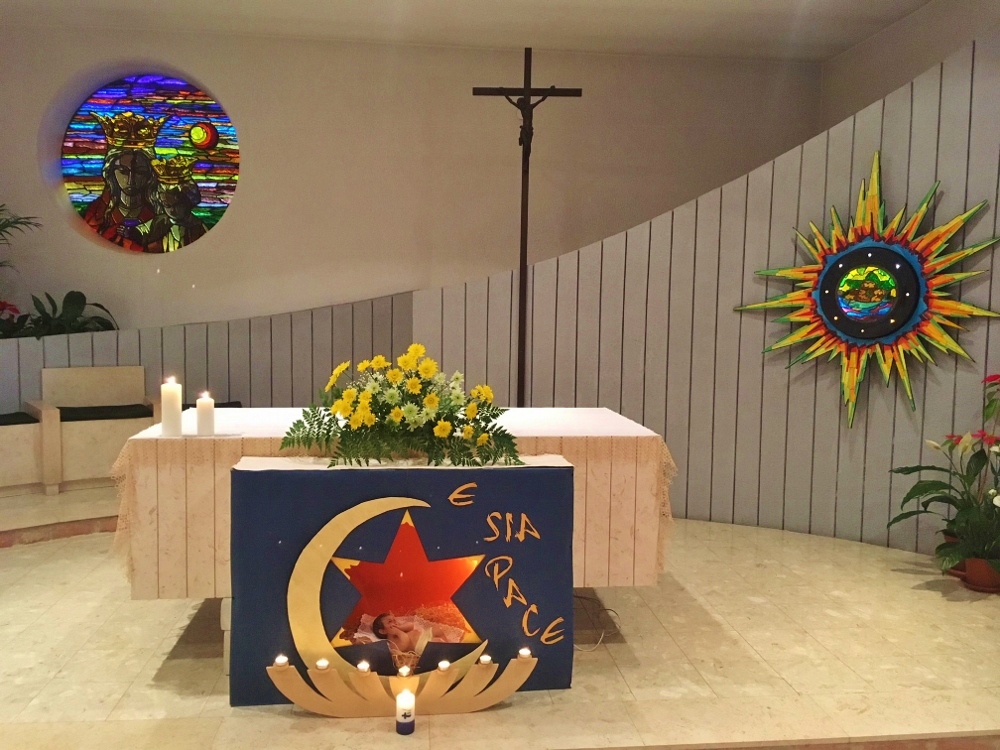 The altar at the chapel of the Salesian Sisters House in Cremisan portrays the three religions of the Holy Land: Judaism with the menorah, Islam with the moon, and Christianity with the Star of Bethlehem. It says: "And it will be peace." (Natalia Liviero)

I prayed for all the refugees, for everyone I met in Jordan, for Caritas and the Restaurant of Mercy and their teams, for all the Israelis and Palestinians I know and that I recently met, and for VIDES+USA, the Salesian Sisters in San Antonio, Texas, the ones in the provincial house of the Middle East who so warmly welcome me in their homes, and for the entire Salesian Family.

I was very fortunate to be in Bethlehem and in the Holy Land at this time of the year, and I truly appreciate all who have supported me during my mission in the Middle East in one way or another, and who were also included in my rosary prayer.