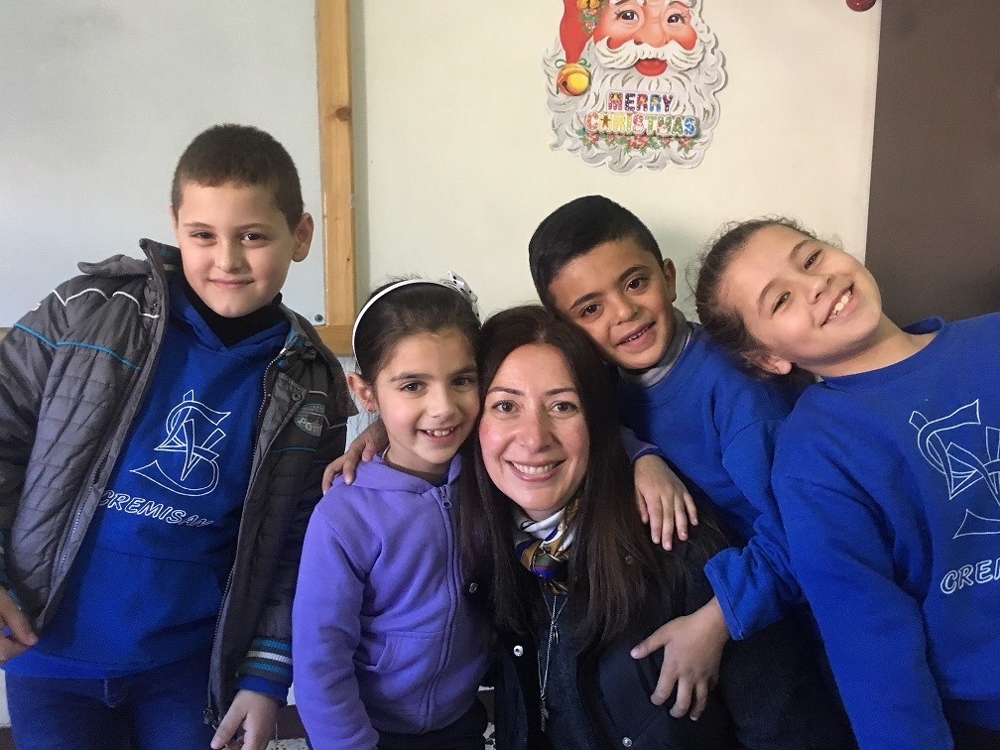 Cremisan was one of the possible destinations for my mission in the Holy Land, so I was curious to see the work of the Salesian Sisters in the valley of Beit Jala, Bethlehem, in the Palestinian Territories.

I had met Sister Soad, the superior, while I was at the provincial house in Amman last summer, and she invited me to spend some time with them during my mission in Nazareth before she left for her new mission site in Syria. The right time to go happened to be the weekend of the Christmas tree lighting in Bethlehem on Dec. 2.

On the morning of Dec. 1, I took the bus from Nazareth downtown to the Jerusalem central bus station, then the tram to East Jerusalem to catch the bus to Cremisan at the bus station from which all the buses to the Palestinian Territories depart. The whole trip took about four hours. 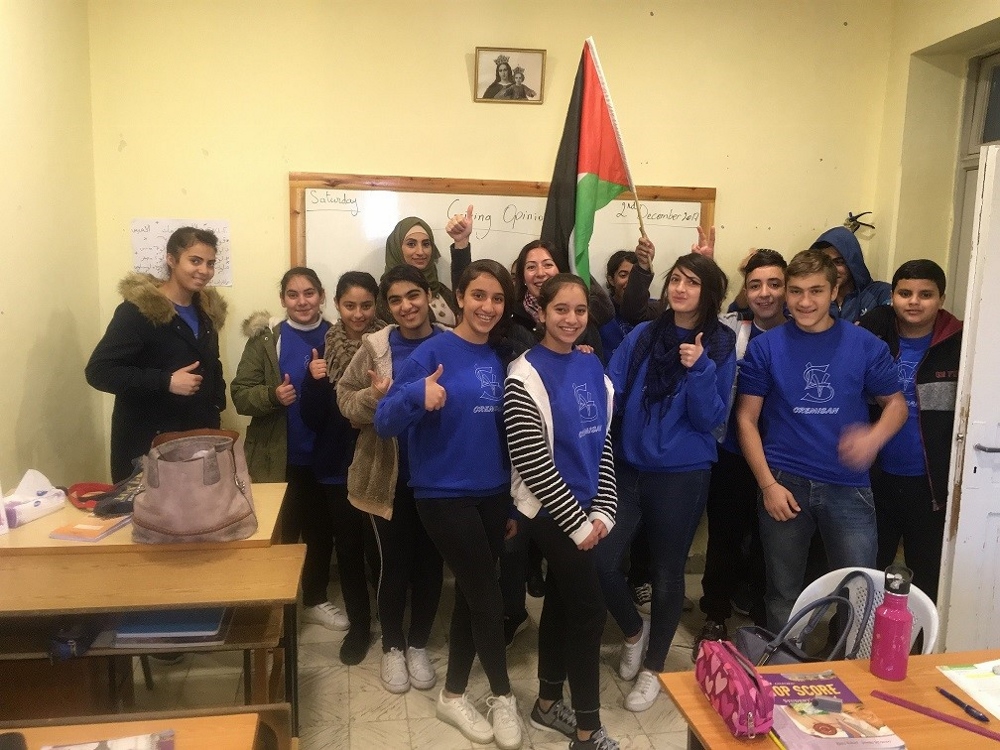 Natalia Liviero is pictured with ninth-grade students. There is a picture of Mary Help of Christians and the Palestinian flag in every classroom. (Provided photo)

As in all of their houses, the sisters received me warmly. The community has three older sisters from Italy who have been in the Holy Land for more than 30 years, two sisters from Lebanon, and a sister from India whom I had met in Amman while she was waiting for her mission site.

The sisters have a big house on a hill from which they run the Laura Vicuna School for about 250 mostly Muslim students from 3 years old to ninth grade. Even though it's a Christian school, they never make any distinction between their Muslim and Christian students. They even created a universal prayer for peace that they recite every morning before going to class after they sing the Palestinian national anthem.

The weekend system in the Middle East is different than that of the Western world to accommodate their different religions. In Cremisan, the school is open Mondays through Thursdays and Saturdays. Friday is a holiday for Muslims, and Sunday is a holiday for Christians. And on Sundays, the sisters offer oratorio, or youth ministry, for their students and for other children.

On Saturday morning during formation, Sister Soad introduced me to the students and teachers, and I had the chance to speak to them in Arabic and to express how happy I was to be there and to meet them. On that day, I helped at the office since the secretary was off and supervised the students during their break. In my conversation with the children, I was surprised about their interest in learning Hebrew, so we counted together in Hebrew, and I taught them some words. Then the students invited me to their classes, so I went to ninth and seventh grades during their English class.

And that night, Sister Soad, who in her 24 years at Cremisan had never been to the Christmas tree lighting in Bethlehem, joined me and two other Italian ladies staying at our house to participate at the event! There were thousands of visitors, including Palestinian Christians and Muslims and tourists from all over the world.

On the morning of Dec. 3, the first Sunday of Advent, we went to Mass to the Cremisan Salesian Monastery a few meters away from our school, established in 1885 in the ruins of a seventh-century Byzantine monastery. Cremisan is famous for its winery and as an olive and olive-oil producer. The place is peaceful, and its views are wonderful.

After lunch, we received the kids for oratorio. I spent some time with the older kids, mostly 14-year-olds, during a group activity in which they had to find black-and-white photos and explain what they meant to them. Then I went to another class where they were being taught English and helped them with exercises about the present simple and present progressive tenses.

One of the most touching experiences of the trip was talking to a young Muslim girl, 18, wearing a hijab who goes to the oratorio to train as an animator. It was inspiring to see the integration between Muslim and Christian children and adults at the sisters' school.

On Dec. 4, I participated in the school routine and started the day with the ninth-graders, again at their English class. This time, they had to work in pairs and write a dialogue expressing opinion. I spent some time with each group listening to their arguments, and I was impressed by some of them, including one who wrote about the effects of space travel on our bodies. Before the class ended, they asked me to stay and teach them a Christmas song in Italian. So I read the song out loud and they repeated after me. I asked them to teach me the last part, which was in Arabic — it was fun! 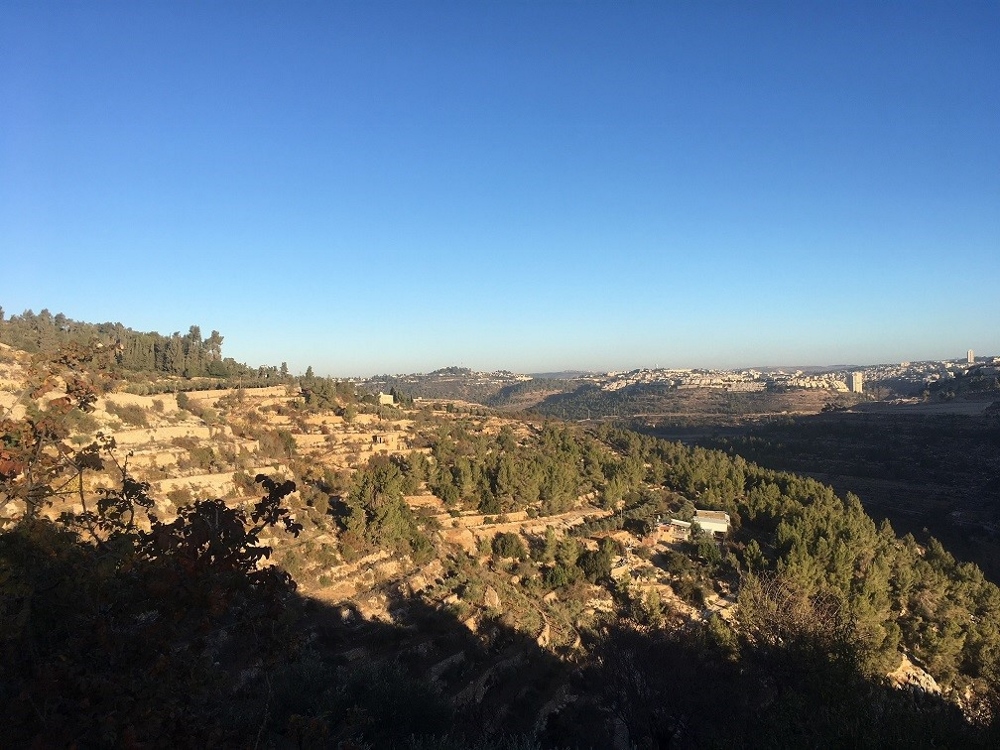 View of Cremisan Valley, land owned by the Salesian Sisters. It's an important archeological site with caves, from the Canaanite period. (Natalia Liviero)

Tuesday, Dec. 5 was my last day in Cremisan. The sisters had been invited by Islamic Relief Worldwide to lend a Catholic perspective to a talk about violence against women and early marriage to an audience of about 50 Muslim widowers, many of them young. Poor families usually make their daughters marry before the age of 16 because they are an expense, so they pass the responsibility to the future husband. Then, if the new couple has a lot of children, they could end up doing the same with their younger daughters.

The mufti of Bethlehem participated in the talk as well and said early marriage was accepted if the girl has the free will to marry, and he spoke about the importance of respect to women to protect them from domestic violence.

Sister Ibtissam, on the contrary, said early marriage is not accepted in the Catholic Church and added that the church offers a prenuptial course to prepare the couple before the wedding. She stressed the education received within the family where girls have a role model for a good or a bad marriage will make them stand against domestic violence. The widowers listened attentively to Sister Ibitssam's words, and some even wanted to take pictures with her. It was a wonderful event.

We had lunch with the sisters in Cremisan and then headed back by bus to Jerusalem to take the bus to Nazareth. The next day, after U.S. President Donald Trump announced the recognition of Jerusalem as the capital of Israel, the Christmas tree in Bethlehem was turned off in an act of repudiation, and Israel closed the border crossing for several days because of the demonstrations. I was lucky to be there — and to leave — at the right time.

Cremisan is also a controversial site. I had been to Cremisan after Holy Week in 2013 with a friend to buy wine after attending the weekly Friday Mass for peace and against the building of the separation wall that was held on the main road. That was another reason I wanted to visit Cremisan: to see the recently completed separation fence built by Israel. Cremisan is in between two Israeli settlements: Gilo on the other side of the valley and Har Gilo on the top of the hill. 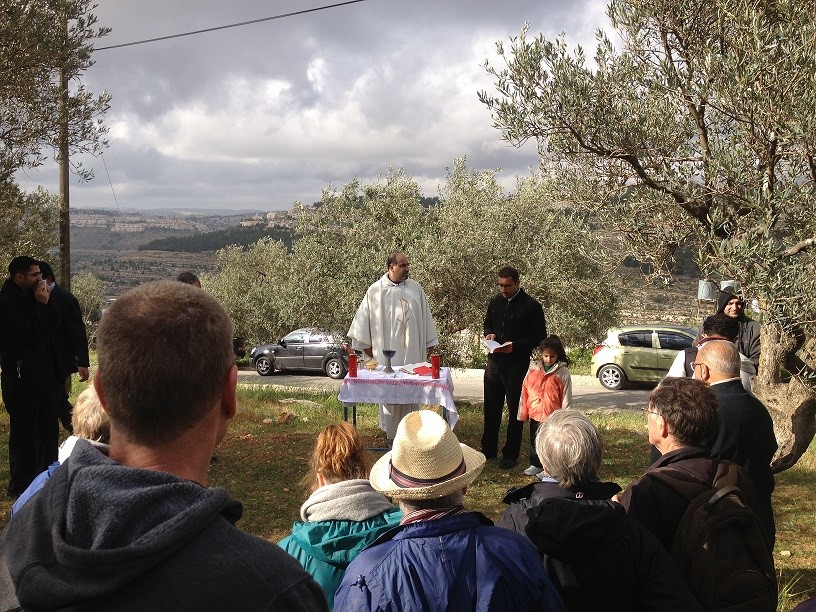 Weekly Friday Mass on April 5, 2013, for peace on the Cremisan road by Abouna Ibrahim (Natalia Liviero)

Both the monastery and the sisters' school in Cremisan are divided by the Green Line, which was "set as the cease-fire line between Israel and Jordan in the 1949 Rhodes armistice agreements." Part of their land is in Israel, and part is in the Palestinian Territories. For example, the sisters' house has the kitchen, dining room and chapel in the Israeli side, and the office and bedrooms in the Palestinian side.