• Adjusting to and appreciating life in Dilla

This article appears in the Notes from the Field feature series. View the full series. 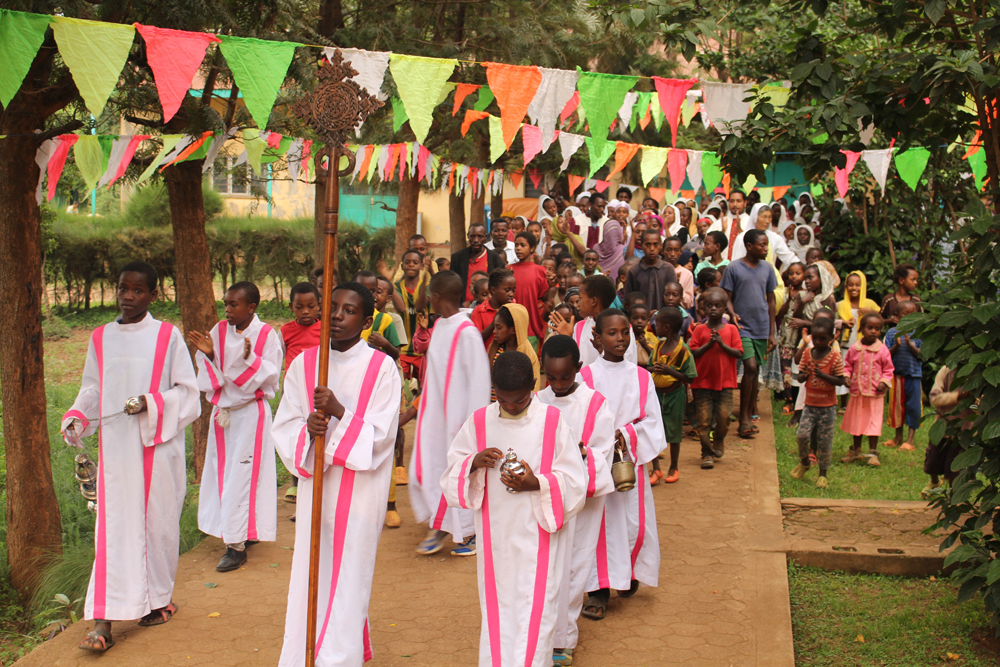 Dilla, Ethiopia — Notes from the Field includes reports from young people volunteering in ministries of Catholic sisters. A partnership with Catholic Volunteer Network, the project began in the summer of 2015 This is our fourth round of bloggers: Christian E. Ruehling is a volunteer missioner for VIDES+USA currently serving in Geneva after five months with the Salesian Sisters in Dilla, Ethiopia, and Maria Beben is a staff writer for Franciscan Mission Service in Washington, D.C.

One of the things that shaped a large part of my experience in Dilla was celebrating Mass at Mary Help of Christians Church. While they follow the Latin rite (in the north, they use the Ge'ez rite, which is the local equivalent of celebrating a Mass in Latin), there are several aspects of this Mass that makes it a tad more special. 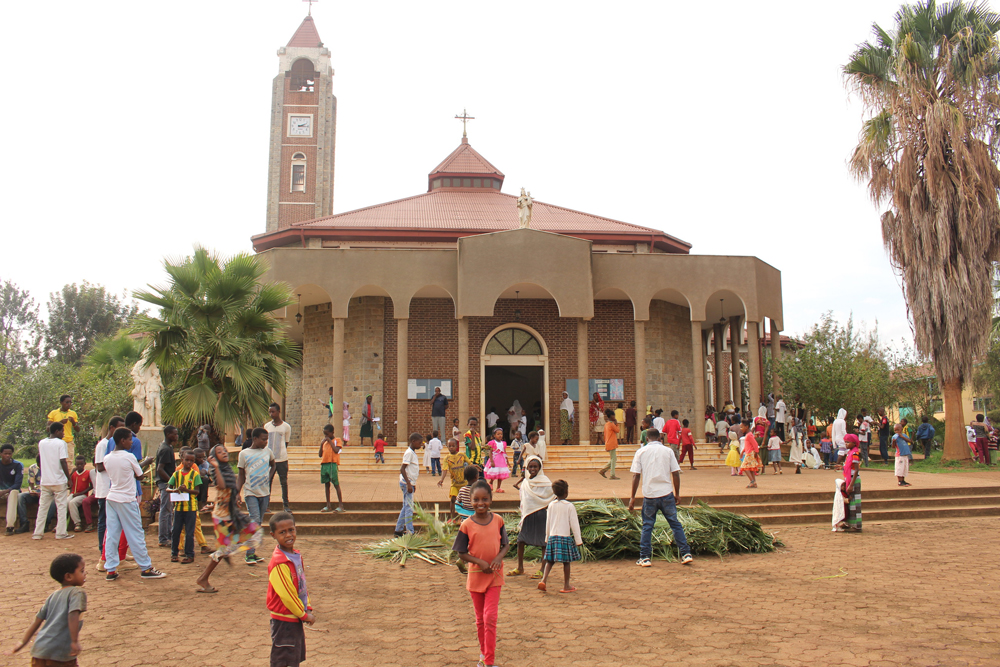 Mary Help of Christians is a cavernous church, tall at its center and supported by an intricate latticework of wooden beams. A beautiful horizontal arrangement of stained-glass artwork lines the top of the center wall of the nave. It depicts Jesus Christ in the middle, flanked by six disciples on either side.

What makes it beautiful — and this goes for Ethiopian religious art in general — is its depiction of Jesus Christ and the apostles with darker skin as opposed to lighter skin that I have been used to seeing for the better part of my life. Christianity has a deep-rooted history in Ethiopia (or Abyssinia, as it was previously called) and is mentioned on several occasions in the Bible.

The gem of this church is its choir. It is made up of 15 to 20 adolescents and young adults who are led by a keyboard player and drummer. They sing and clap through 10 to 12 songs during what can be a three-hour Sunday Mass, and everyone joins in: The singing and music are infectious. The chanting of prayers and hymns is beautiful. You do not need to understand the language to appreciate how they can all sing together in such a beautiful, rhythmic manner, especially the Our Father. 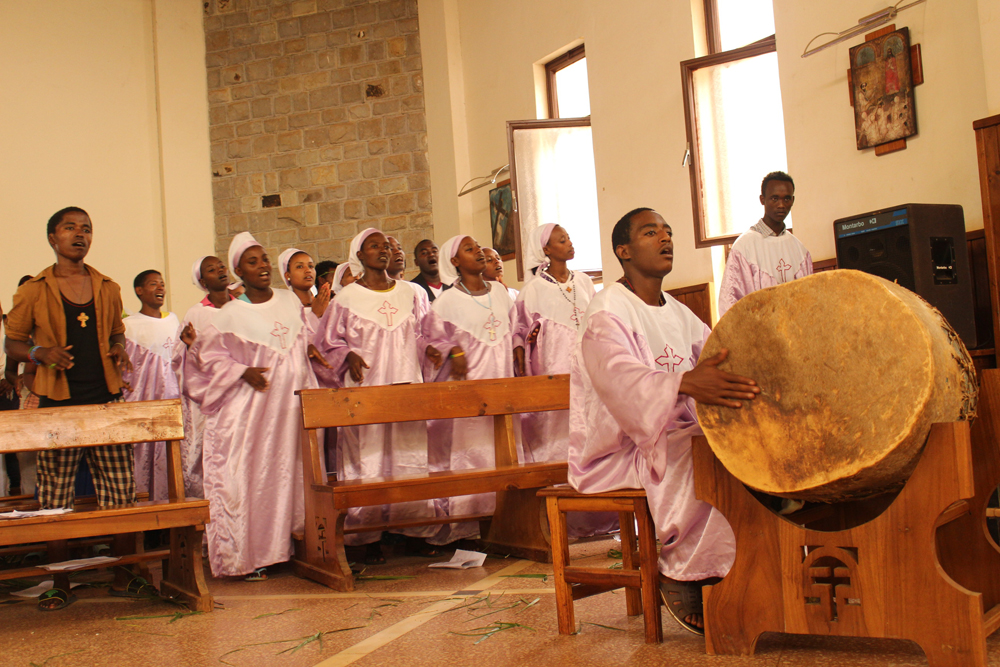 My favorite part of Mass is the time to give the sign of peace. The priests and altar boys walk through the aisles to greet the parishioners. Even more charming, all the smaller children walk up and down the pews to shake hands.

Receiving the Eucharist is also different from the organized manner I am used to at Roman Catholic churches in the United States, where every pew goes in turn down the aisle. Rather, everyone here goes at his or her own time down the aisle. I have noticed that the elders will typically go first and then the younger people, but the general sense is that you go whenever you are ready.

Another aspect of Ethiopian Catholicism that is different from back home is the honorific manner in which the altar boys hold the church's brightly colored, ornate umbrellas over the priests while they give the Eucharist. And during the Mass, parishioners can come to the altar at any time to bring offertory candles to Jesus Christ or the Virgin Mary. Even eggs or chickens are offered during feast days.

Celebrating Lent and the Easter triduum in Dilla was also a delight, as the community helped me understand what it truly means to celebrate the passion and death of the Lord. 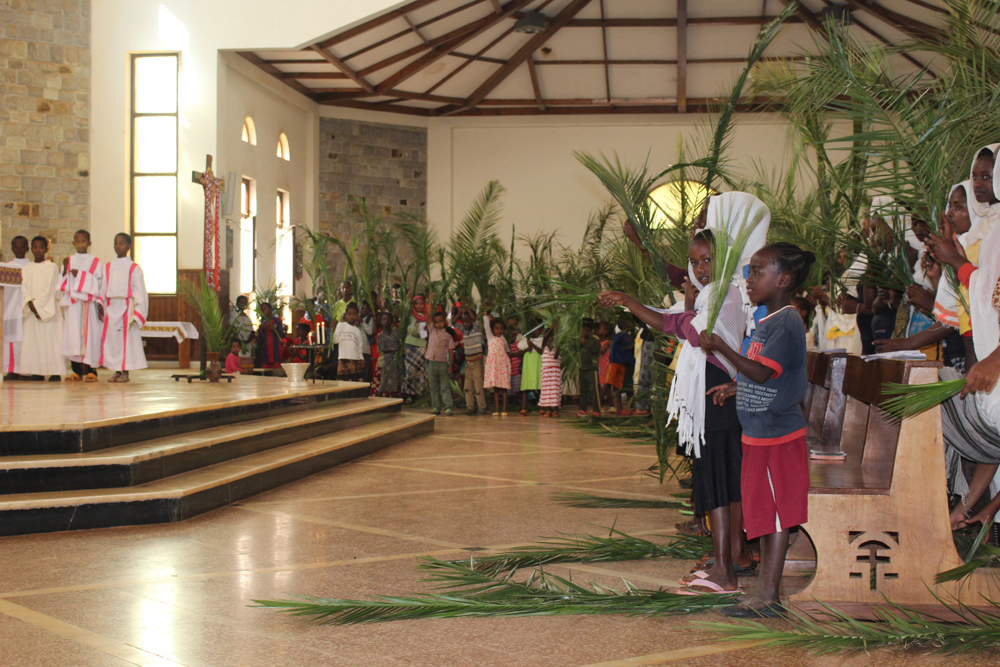 Palm Sunday included a lovely Mass that commenced with a procession outside of the church to bless a large pile of palm fronds. They were distributed among the merry parishioners, who continued the procession into the church. Songs were sung gaily by the ceremoniously dressed choir while the churchgoers enthusiastically waved their palm fronds in the air.

The choir had not used its electric keyboard or drum to accompany their songs during the Lenten season, so it was with great excitement that these musical instruments were once again used. The atmosphere in the church was livened by the multiple fronds strewn across the floor and by the children wearing creative rings and crowns made out of the palm leaves.

Good Friday was by far one of my most memorable experiences of expression of faith. The parishioners gathered at another Catholic church about 3 miles away at around 8 a.m. and began a series of prayers, chants and liturgy readings that lasted to about 2 p.m. In between the readings and singing were several periods of genuflections that would last about 15 minutes, during which time they recited, "Lord have mercy." Everyone physically capable took part in these acts of reverence and worship.

Mass was then held at 3 p.m., and the community gathered afterward outside the church to break their fast with sweet tea and a platter of beans and bread. By 6:30 p.m., we finished a long day of celebrating the Lord's Passion.

Holy Saturday was spent preparing for the feast and joy that followed the resurrection of Jesus Christ. I spent most of the day helping the sisters with the Easter decorations and cooking. After a small meal, we attended Easter Vigil, which began at 11 p.m. with a bonfire outside the church. The Easter candle was lit from the fire, which the priest had blessed.

We entered the dark church in procession with our candles, which we lit from the blessed fire of the Easter candle. At midnight, the liturgical readings were interrupted to celebrate Jesus' resurrection. We continued the Mass until 2 a.m., and afterward, we had a small celebration at the sisters' home with tea and traditional Italian Easter cake (colomba pasquale).

The weekend ended with another Mass early on Sunday morning, where joyous singing and prayers punctuated the festive atmosphere of Jesus' resurrection.

I found it really amazing to see the faith that the Ethiopians hold dear to: young to old, the child, father, grandfather, mother. The Easter triduum was especially meaningful for me as I previously have never understood what these holy days mean to our faith.  I consider myself very lucky to have been stationed at this mission, where I was able to experience this beautiful Mass and partake in this community's celebration of the passion and death of Jesus during my stay in Dilla.