If one of the biggest weapons in Ebola’s deadly arsenal is fear, then one of the best ways to combat it is through education.

And Sr. Ann Kelly, of the Missionary Sisters of the Holy Rosary, not only found herself in a great position to help fight that battle, but said it seems to be paying off: In the area where Kelly works, the number of Ebola cases currently is dropping.

Kelly and two other sisters have been working to educate people on how to prevent the spread of the deadly virus.

“At first, the government took a very heavy-handed approach – they wanted to keep things under control,” she said. So markets were closed, schools were shut down and the economy ground to a halt.

“In the rural areas, there’s a lot of peasant trading, where people carry goods to market on their head,” Kelly said. “But with the markets closed, they couldn’t do that, and they couldn’t get money to survive. You were not allowed to transport goods to the capital, and that was an important source of income for a lot of people.”

Some of the restrictions have eased, and people now understand that the checkpoints where everyone’s temperature is taken to check for signs of the virus are for their own protection. They have also set up smaller markets so goods can be traded, and it is now harvest time.

“The main thing will be to move the goods they harvest,” Kelly said. “The economy is faltering badly on the macro level, but on the micro level they’re eating at least.”

“The borders are so porous, people cross over without a second thought,” Kelly said. “The tentacles of the virus go in every direction, and tracing it is very difficult in this kind of set up.”

Kelly said the fear is that when the crisis is over, the international community will go back to ignoring Liberia, just when the country will be most vulnerable to the kind of power struggles that have led to civil wars there and elsewhere.

“The vacuum of power will be very big,” she said. “People here believe in government, but there is also some belief that the government is somehow getting power out of this, that there’s a lot of money coming in and people are asking where is it going. They fear that it’s a money racket, and once again they’re the losers.”

But the people are survivors in every sense of the word.

“Things are at a subsistence level anyway. They don’t have running water, they don’t have a lot of things,” she said. “They cope with it, they celebrate what they have. They’re also physically strong – from a young age they walk long distances and work very hard.”

Still, with so many dead – including medical staff and religious – isn’t Kelly afraid of Ebola herself?

“From the very beginning, we educated ourselves about prevention. So the biggest fear is getting the virus indirectly,” she said. “Our fear is that we’ll walk into a village inadvertently when someone has just died there.”

And just as they taught villagers, the sisters took precautions.

“We didn’t wear protective clothing, but we also didn’t feel at any point that we had to stay in the house and not go out,” Kelly said. “We avoid shaking hands and hugging, which is difficult, but we lived through the war, to some extent. We have a bit of a history of living through these tense times.”

Besides – there are worse things than fear.

“The worst thing is seeing the trauma of other people; that’s more distressing than anything else,” she said.

And she can let others worry for her: Kelly is Irish by birth and American by naturalization, and her family keeps up on the news.

“They phone a lot, they worry and they wonder. They see more than we do – they see the reports on TV,” she said. “We’re not getting all those pictures all the time. We see the survivors and the post-quarantine people, but we’re not seeing people dying.”

And the people they serve are grateful for their presence.

“They view us, as they say, as ‘God People.’ So our being here continued to give them that feeling they’re not completely on their own. They can take courage from that,” Kelly said. “A lot of people have expressed that. They would have understood it if we did go, but we said, ‘No, we’re staying.’”

The people are especially grateful when they see the price others have paid for staying.

“We used to stay in Monrovia with a group of sisters when we traveled there,” Kelly said. “One died, two other contracted Ebola, but survived. Two brothers and a priest died. . . . It lets people know we come for the long haul. And the people know that those [religious] died here so far away from their family, they express their gratitude for that. You can’t help but feel blessed by them.”

Kelly spent 11 years in Guinea, where she and other sisters worked with refugees from the civil wars in Sierra Leone and Liberia. Then eight years ago, she and two other sisters moved into Liberia and began working there, mainly to reduce illiteracy.

In Liberia, about 85 percent of the population of 4 million lives in poverty, so education is key, Kelly said. Knowledge is power, of which the people have little.

“We were educating people about land rights and land grabbing,” she said.

And then came Ebola.

“I was here when the first outbreak of Ebola took place, and no one took it as seriously as it should have been taken,” Kelly said. “Once Ebola came into being and took over the environment, we moved into Ebola awareness and education.”

Kelly and the other sisters were not medical professionals, so they couldn’t treat the disease, but they could teach people how to prevent it. That was especially important in the villages around Voinjama, in the rural north part of the country.

With an education network already in place, the sisters just switched from teaching people how to read to how to prevent the spread of Ebola.

“We’re using the same team throughout the whole county,” Kelly said, and that team has since expanded its reach as the crisis demanded.

With Ebola, they quickly learned, education can be the difference between life and death.

“In the initial stages, many people died because they only went to the clinic at the last minute, so the treatment came too late. So we had to educate them to go right away, to seek help as soon as they’re sick,” Kelly said. “We also had to teach them that Ebola is real – some people thought that it was just made up or that it was some kind of money-making scheme.”

The sisters also had to teach people that the traditional burial methods could be deadly: The local custom is for family members to wash the body, and extended family comes from all over to take part in the rituals – and at the time when the virus is most dangerous.

“In one village near us, 165 people died, largely due to burials,” Kelly said. “In their traditional beliefs, they have something called ‘bad signs,’ so if you’re sick, it’s because someone put a bad sign on you. And with Ebola, many people believed that’s what happened. Then they died and all the rituals began, and before you knew it, it had spread everywhere.”

Then panic set in, as people didn’t know what to do or where to turn.

“In one case, instead of calling a treatment center, they took the sick person to Guinea, where they infected others. Then they brought them back and spread it further, and then died,” Kelly said. “In some cases, whole families were wiped out.”

“Not being able to bury their loved ones in the traditional way and to have to call emergency workers in all this gear to come get the body, it terrified them,” Kelly said. “But once they’re educated, those fears subside.”

They also had to educate them on simple things that not only help to fight the spread of Ebola, but other illnesses, as well – which became critical as the little bit of health care infrastructure that existed collapsed under the Ebola explosion.

“The thing I most want people to know is this is a tragedy that can strike anywhere, but it struck the most vulnerable part of the world. We in the international community must put our best foot forward and let the people of West Africa know they matter to us,” she said. “Keep all of us and all of West Africa in your prayers – it is as important as all the financial contributions.” 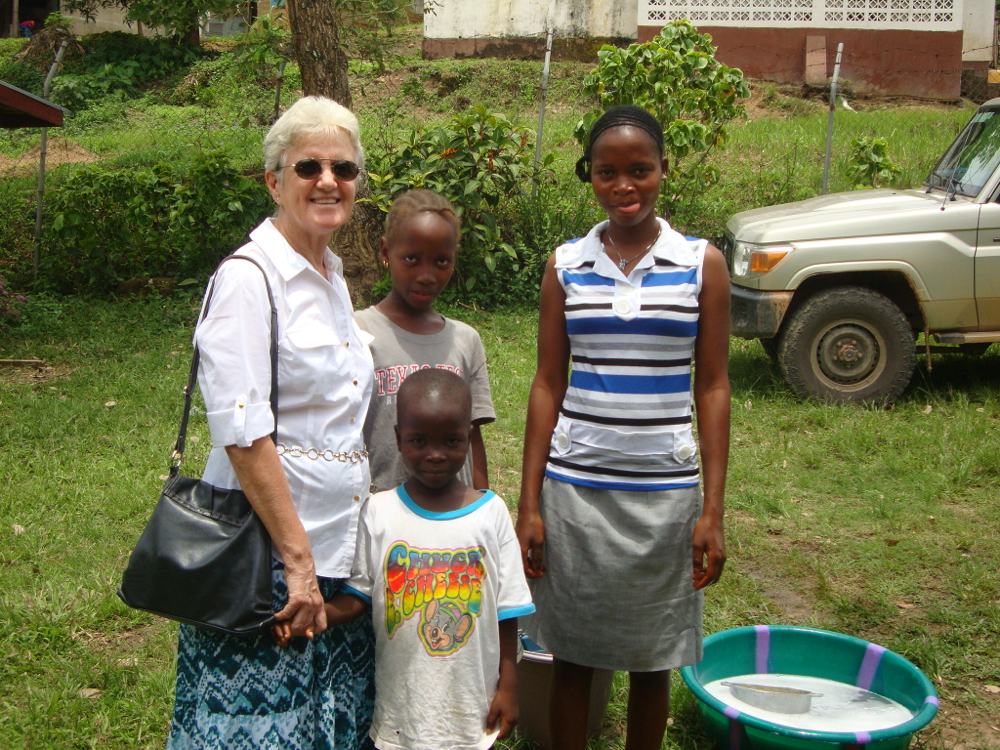