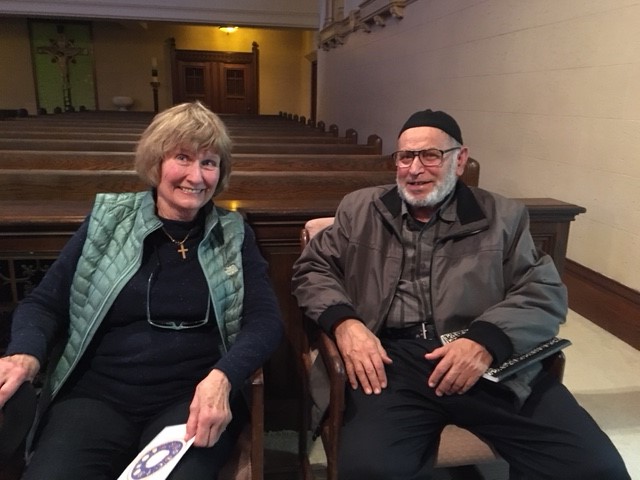 Janet Schroder and Mounir Aboukhaled, Muslim elder from Muslim Community Association in Santa Clara, at the Jan. 28 prayer service sponsored by the Burlingame Sisters of Mercy (Courtesy of Diane Fahrner)

Back in January, 21 people gathered at Mercy Center in Burlingame, California, for a conversation designed to reach across their differences, understand each other, and honor the sacredness of everyone in the human family.

I was impressed by their earnest effort to engage differences and uphold dignity. One Native American — responding to the question, "Have you ever been in a conversation where people weren't listening to you?" — voiced the pain of being "other," ironic in the land that was first theirs.

The gathering was part of a Year of Outreach and Solidarity, designed for people of different backgrounds to learn from each other, launched in November and guided by the Burlingame Sisters of Mercy.

In addition to standing in solidarity, the year of outreach includes several gatherings for conversation, prayer and education. A committee of 30 sisters and associates asked six members of the local mosque: How can we connect with and support people in our community who are victims of hate and discrimination and/or fear deportation?

The plan they developed with the Muslim community has three key components: education about Islam, interfaith prayer for peace, and relationship-building. They began Nov. 5 with "Introduction to Islam," a talk by Imam Khalid Siddiqi attended by 80 people.

Next was the Rebuilding Relationships meeting Jan. 21 that was based on Living Room Conversations, which "create a space for people who come from different cultures and religious backgrounds to discuss their experiences and shared aspirations," as the printed guideline for the discussion said.

It's the "immune system of the human family to talk across differences," spiritual director and facilitator Catherine Regan said in her introduction.

Then on Jan. 28, the Burlingame sisters sponsored a prayer service led by faith leaders of various traditions: Jewish, Christian, Muslim, Buddhist, and Native American. About 80 people participated and found the opportunity to pray together for peace in various traditions moving and beautiful. Monthly gatherings will continue to rotate the three activities for a year.

Their actions did not occur in a vacuum. The sisters have a long history of openness to people seeking refuge in the United States. Mercy Sr. Joan O'Donnell, a member of the Outreach and Solidarity committee, said their community made a public statement about those forced to flee violence and poverty in their own countries and became a sanctuary in 1985. They housed refugees from El Salvador and Guatemala on their property as long as people needed to get settled and get jobs. 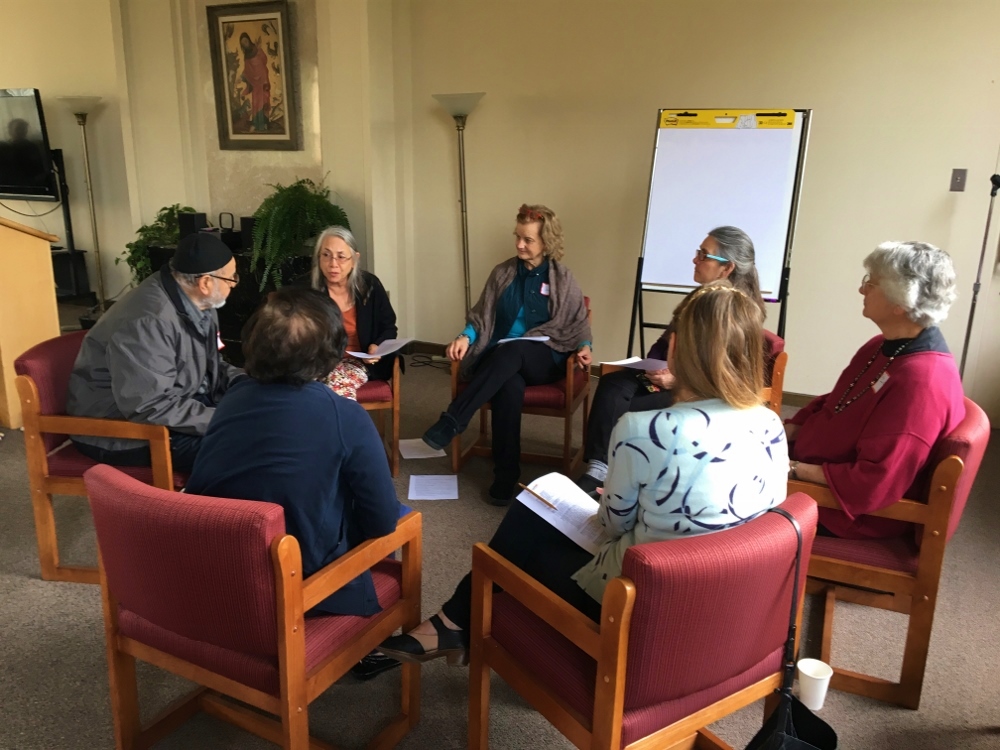 About 20 people gathered Jan. 21 at Mercy Center in Burlingame, California, for Rebuilding Relationships, an interfaith meeting in which participants talked about their differences. (Courtesy of Catherine Regan)

O'Donnell said in reinvigorating some of that original committee today, the sisters asked: "Do we want to become a sanctuary again? Is this the best place? Or could other actions be more impactful?"

They knew their location — about 50 minutes south of San Francisco — wasn't ideal for refugees needing transportation, work, and fellowship with other immigrants.

In January 2017, they denounced as immoral the Trump administration's executive orders to ban entry from seven Muslim countries, build a wall on the U.S.-Mexico border and deport immigrants.

"Given the unprecedented scale of the global refugee crisis, these measures will deepen the tremendous suffering of those fleeing unimaginable conditions of violence, poverty, and war, and further tear families apart," they said then. "Every day Sisters of Mercy and our partners work with immigrants and refugees throughout this country and across the world. We renew our commitment to stand in solidarity with people forced to migrate."

Several sisters have joined local interfaith groups, such as the Muslim Yaseen Foundation and the Rebuilding Alliance, which has campaigned for peace between Israel and Palestine for decades. They also participated in interfaith training on how to respond to U.S. Immigration and Customs Enforcement, which may target California more harshly because it's a sanctuary state.

They invited the help of others who shared their enthusiasm. Spiritual directors Regan and Joy Hayter facilitate the conversations about why people came to the discussions, what their core values are, what positive or difficult relationships they've had in the past, what new learnings they found from each other that day, and what steps they'd like to take next.

Hayter told the San Mateo Daily Journal she would "start the conversations by inviting participants to be curious, open to learning and respectful."

The sisters draw on the resources of the Mercy Center, the retreat center that adjoins the convent. Thousands of people come through it annually for workshops and retreats, creating a target audience for the solidarity effort. 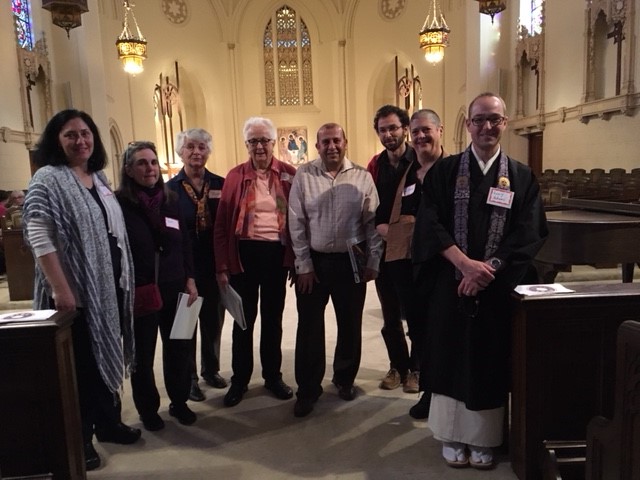 The sisters wanted to broaden beyond their retreat groups, so some pray at the mosque and participate in interfaith efforts. Their center provides meeting space, supportive staff, coffee and cookies. Buchanan works closely with her niece, Penni Thorpe, a longtime member of the Peninsula Conflict Resolution Center.

"It's not too hard and something we can still do when aging because we've gotten so much help," Buchanan said.

Their hope for now is that all participants in the year of prayer, conversation and education will learn from each other.

"If you spread knowledge amongst others then there's no need for fear," Salah Elbakri, former president of the Yaseen Foundation, told The Daily Journal.

At the end of the year, Buchanan and her committee plan to ask, "What's next? Was this the right thing to do? Is anything else needed?" For now, they do what's possible, welcoming differences.

It's easy to imagine Catherine McAuley, their foundress, smiling in delight. She set the precedent on Sept. 24, 1827, when she opened the doors of the first House of Mercy on Baggot Street in Dublin, called "Kitty's Folly" by her critics, according to M. Bertrand Degnan's Mercy Unto Thousands. It became a home for unemployed and homeless servant girls, a school and orphanage. Today, it's called Catherine's House and is known as a "Centre of Hospitality, Heritage, Pilgrimage and Renewal," according to its website.

Unlike most religious of their day, the Mercy sisters were oriented first toward mission. They weren't cloistered, so they could visit the sick and poor in hospitals and homes. McAuley's attitude was similar to the sisters today, more curious than afraid, asking, "Who knows what will happen?"

In the spirit of interfaith dialogue, the Jan. 21 conversation at Mercy Center concluded with the words of Sufi poet Hafiz:

How did the rose ever open its heart and
give to the world all of its beauty?

It felt the encouragement of light against
its being; otherwise we all remain too
frightened.

[Kathy Coffey is the author of several books about prayer as well as catechetical resources and numerous articles in Catholic periodicals, including National Catholic Reporter.]

Growing up and getting a sense of justice and peace